After years of drought, in spring of 2016 I had the good fortune to photograph Yosemite Valley with actual flooding—nothing devastating, just enough for the Merced River to overspill its banks and create reflections where meadows normally exist. One such location was a spot beneath El Capitan, where I found myself faced with the challenge of capturing more scene than my 16-35 lens could handle. 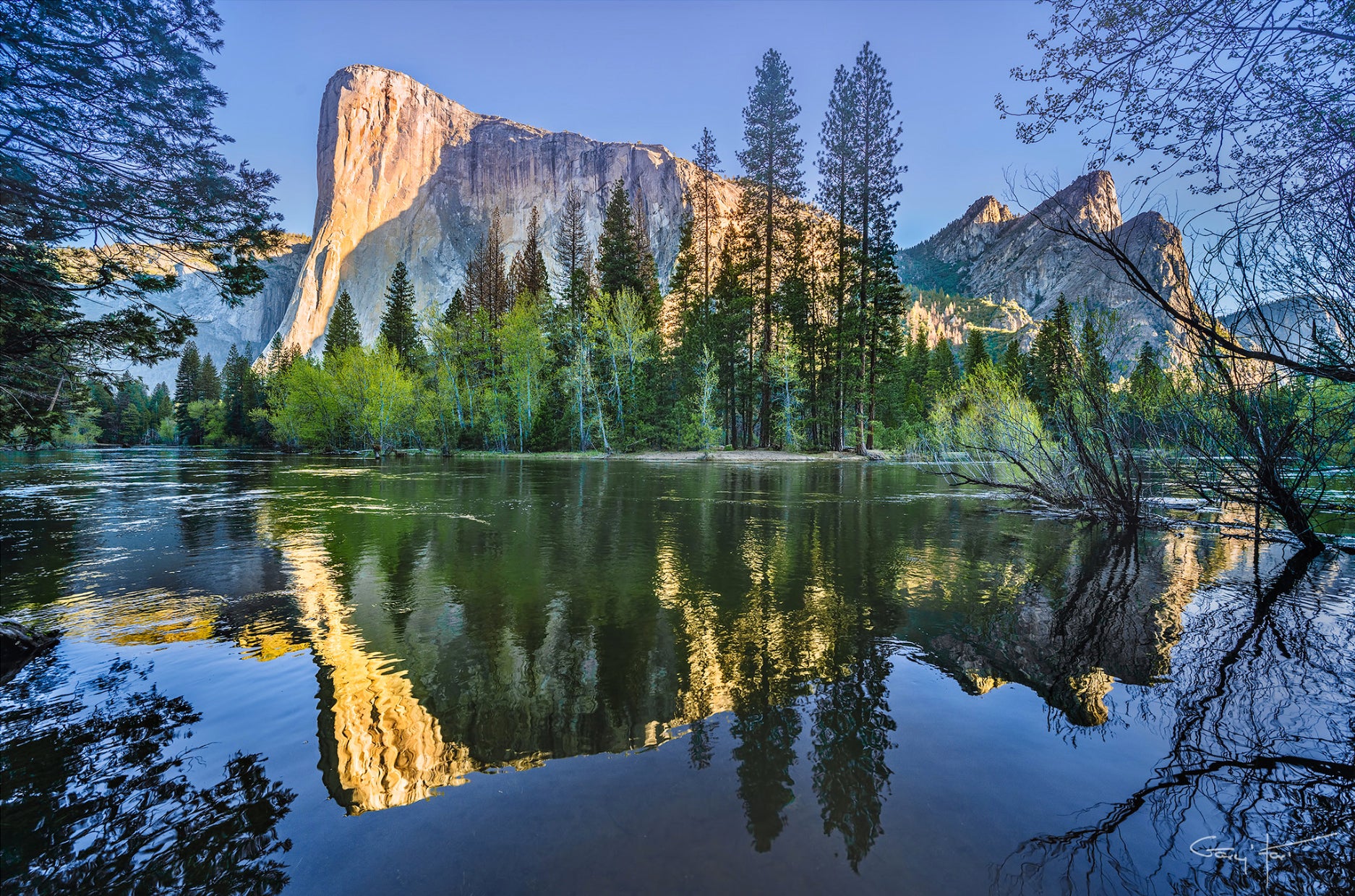 Stitching multiple frames was an option, but because I have a thing about not doing things I couldn’t do with film, my goal is to always capture a scene with one click (this is my problem, and in no way do I mean to discourage others from entering the 21st century). One benefit of my self-imposed one-click rule is that I often find creative compositions I might have overlooked had I settled for the easy solution, but in this case I really, really wanted to photograph the entire scene. The photography gods were smiling upon me that day, as I was leading a workshop and the photographer assisting me generously offered to loan me his Canon 11-24 f/4 lens (thanks, Curt). Since I had in my possession a Metabones adapter that allowed me to pair Canon glass to my Sony body, I leapt at the opportunity.

That was an epiphany moment for me, because even though I knew that the difference between 11mm and 16mm is more significant than it sounds, I’d never really compared the two focal lengths side-by-side. Replacing my 16-35 with Curt’s 11-24, suddenly I had the entire scene in my viewfinder, with room to spare. Not only that, I learned as soon as I put the images up on my monitor that the Canon lens was really sharp—I was in love. Sony shooter or not, I came home fully intending to purchase the Canon lens, and came very close to making a big mistake.

My decision not to pull the trigger on a Canon 11-24 purchase was three-fold: 1) it was $3000 2) it’s so massive that it could never be a full time resident of my camera bag 3) I knew Sony was committed to expanding their lens lineup, and that I’d be wracked with regret if Sony released a similar lens soon after I’d sunk $3,000 into a lens that could double as a boat anchor. But still….

Imagine my relief when my Sony doused my Canon fantasies with an ultra-wide lens of their own this spring. Given the opportunity to test the Sony 12-24 f/4 G lens before it was announced, I immediately took it to Yosemite where the flooding on the Merced was even more extreme than last year. Finding “my” spot underwater, I probed the riverbank for nearby vantage points and found the view I’ve shared at the top of this post.

It wasn’t difficult to see that the Sony 12-24 is every bit as sharp as the Canon 11-24. And not only does it not require an adapter to use on my Sony bodies, it weighs less than half of what the Canon ultra-wide weighs. I ordered the 12-24 immediately and this week packed for my first trip with it.

When I drive to a photo destination I bring virtually every piece of camera gear I own, but when I fly, I need to be a little more selective. As I chewed on what to bring and what to leave out, not only did I quickly confirm that the 12-24 would make the cut, I discovered that the new lens is small and compact enough to occupy a permanent space my camera bag.

Which brings me to another thought. I shoot Sony mirrorless for several reasons—foremost is the image quality: Sony’s unmatched combination of resolution, dynamic range, and low-light capability is exactly what I need for landscape photography. And after a few growing pains, I’ve come to love the electronic viewfinder and can’t imagine ever going back. Sony’s lenses are as sharp or sharper than anything I had from Canon, but I don’t think the compactness of Sony’s f/4 glass gets the credit it deserves for their ability to provide so much quality in such a compact package. How compact? They’re small enough to slide into a slot in my bag oriented up/down (resting on an end rather than along a side), which gives me so much more room for more gear (and what photographer doesn’t love more gear).

Here’s what’s in my camera bag (F-stop Tilopa) for this week’s trip to the Grand Canyon:

Despite the fact that wide angle is the reflex response to most landscapes by virtually every tourist who picks up a camera, good wide angle photography is not easy. From diminished backgrounds to perspective distortion, wide angle lenses pose problems that can be turned to opportunities if they’re fully understood. I’ll save a full discussion of wide angle photography for another day, but here are a couple of tips that might help:

Put something in your foreground: Many of my wide angle images put the primary subject front and center, but even when the background scene is my main subject, I try to have something of visual interest in my foreground. Browse the gallery below and note how many images have an empty foreground (Hint: Not very many). Sometimes I’m able to include something as striking as a mirror reflection or colorful flowers, but often my wide angle foregrounds are as simple as nearby rocks or leaves. If there’s nothing at my feet and I’m required to use something distant, at the very least I want the foreground of my wide image to be filled something worthy of the space it occupies.

Perspective distortion (the tilting of vertical lines) is minimized when the lens is level: Mount on your camera a wide angle lenses at its widest focal length, point it at a row of trees (or some other vertical lines that spans the edges of your frame), and tilt it up and down while looking through your viewfinder. At what point do the trees appear straightest? Most slanted? I rest my case.