As DSLRs fade into the history books of photography, Sony has emerged as the official leader in full-frame cameras in the US. Newly-released NPD data shows the remarkable growth Sony has achieved through a combination of innovative next-generation mirrorless cameras and a thriving community of active creators who are reimagining what photography and videography can be.

Sony has emerged as the official leader in full-frame cameras in the US.

In the role of industry leader, Sony has created a new "Be Alpha" campaign that will foster the continued growth of the community through a series of events for all manner of creatives. Also, an integral part of the multi-faceted Be Alpha campaign, the company is creating an "Alpha Female" program with the goal of leveling the playing field for women in the photography and videography creative spheres through a comprehensive program of grants, mentorships, events and career advancement forums.

Details on upcoming dates and locations for Be Alpha events as well as the Alpha Female program will be forthcoming. As the information hub of all things related to Sony Digital Imaging, we'll have all the details at AlphaUniverse.com first. The official press release for the Be Alpha campaign and Alpha Female program as well as NPD information about Sony's leadership position in full-frame interchangeable lens cameras can be found below:

Sony Celebrates No.1 Overall Position in U.S. Full-frame Cameras with Launch of Historic “Be Alpha” Campaign

— The Leader in Full-frame Empowers Creators of all Types to Continue to Innovate, to Lead, to Push the Limits, to “Be Alpha” —

SAN DIEGO, Aug. 15, 2018 – Sony Electronics, Inc. – a worldwide leader in digital imaging and the world’s largest image sensor manufacturer – today announced that it has overtaken and held the No. 1 overall position in the United States full-frame interchangeable lens camera market in the first half of 2018, in both dollars and units (1). In fact, four out of every 10 full-frame cameras sold during this time period have come from the Sony brand (1).

Additionally, Sony has announced that within the overall mirrorless market, it has held the No. 1 position in both dollars and units for more than six years (2). These strong results can be attributed to the company’s leadership in transitioning the market from older DSLR technology to next-generation mirrorless cameras.

Much of Sony’s recent success has been driven by sales of the acclaimed α7R III and α7 III models, as well as the rapid adoption of the α9 camera amongst professional sports photographers and photojournalists. The brand’s extremely active community has played a major part as well, as evidenced by the strong engagement on key social platforms like Instagram, where the official @SonyAlpha page has just surpassed the coveted one million followers count.

As a celebration of these historic achievements, Sony has announced the launch of its extensive “Be Alpha” campaign that will connect creators of all types with the brand and its ever-growing roster of talented photographers and videographers.

“We’re extremely proud of achieving No. 1 overall share in Full-frame cameras in the US market, as well as holding a strong No. 1 share in the mirrorless market for six years running” said Neal Manowitz, vice president of Digital Imaging at Sony Electronics. “More than anything, we owe this to our community. It is our pleasure to create for you, the true creators. You pushed us to innovate, to change, to continually adapt, and your voice remains core to everything we do.”

Manowitz added, “To ‘Be Alpha’ is to be a leader, to be an innovator, to stand out amongst the crowd. It represents everything we stand for as a brand. Our campaign will celebrate the extended Sony community, while also shining a light on the topics that that we are most passionate about – diversity, conservation, equality and much more.”

Sony’s “Be Alpha” movement will be headlined by a series of community events in major markets throughout North America in 2018 and beyond, beginning with the official launch event on August 19, World Photography Day, in New York City. The campaign will encourage all creators to get involved by sharing their own “Be Alpha” content on all relevant social platforms while tagging #BeAlpha.

The “Be Alpha” campaign will also feature programs that are designed to foster growth in both the current and next generations of imaging professionals, the most notable of which being the flagship “Alpha Female” program. This multi-tiered, female exclusive program is Sony’s thoughtful response to the imaging industry’s well-documented diversity challenges. It will include a variety of grants and mentorship opportunities for female photographers and videographers, as well as the production of several large-scale industry events. Additional details to be released soon.

A variety of additional stories and exciting new content shot with Sony products can be found at www.alphauniverse.com, Sony’s community site built to educate, inspire and showcase all fans and customers of the Sony α brand.

A chart summarizing Sony’s rapid growth in the Full-frame market is included below: 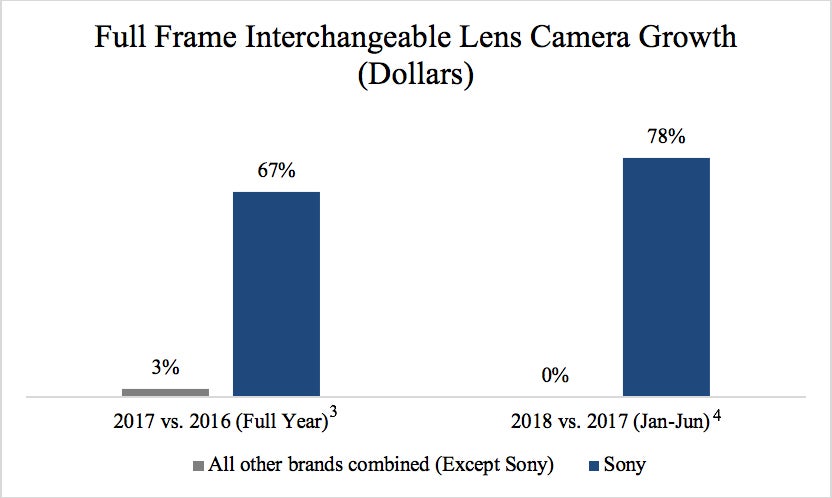