Sleepers. You know….Those great performers that fly under the radar. Not too flashy, not too obvious. Sleepers are special, but less-noticed. It’s the car that looks like every other 4-door sedan on the road, but has a twin turbo-charged V8 under the hood. It’s the late-round draft pick that goes on to win the MVP. It’s the awkward kid who spends lunch reading in a quiet stairwell and goes on to start a billion-dollar start-up. They’re full of potential that’s hidden to most, but emerges under the right conditions.

In photography, there are sleepers too. Here’s a group of lenses that are sometimes overlooked, but, like the Millennium Falcon, they got it where it counts. Several of these lenses predate the prominence of the name “Alpha”. They were conceived when NEX cameras were the mainstay of the Sony mirrorless line. This leads to the incorrect assumption that they might be obsolete. Part of a bygone system. But the NEX cameras established the E-mount which is found on today’s α7R II and α6300. The lenses built for the NEX cameras were designed with the full potential of the E mount in mind.

So here are some choice lenses that pack a lot of capability into a package that flies under the radar. But for those whose job it is to recognize the potential, they are standouts that are just waiting to be drafted by the right photographer to achieve what they’re capable of.

With its f/4 constant aperture, OSS stabilization and G badge the E PZ 18-105mm f/4 G OSS seems like it would be a pretty solid all-around performer for a lot of photographers. The hidden twin turbo inside this lens is the PZ Power Zoom which makes it an outstanding choice for shooting video as well as still images. Designed for APS-C sensors, the lens gives an angle of view similar to 28 -160mm. The G-series lens features a 7-blade iris and ED glass elements and it’s priced at a sleeper-worthy price point of $598

"Listen up Sony users: this is the one zoom lens that you’ll possibly ever need if you’re an APS-C mirrorless camera user.

"No, really—it’s that amazing. Sony’s 18-105mm f4 G OSS is a lens that we didn’t think much of when it came in for review due to its large size. But after using it for a couple of photos, we fell in love. The image quality is really where you’ll become smitten with it. Rendering a field of view equivalent to 28mm to 160mm, it’s a lens that can be your everyday walkaround lens or an excellent option for folks travelling." -The Phoblographer

“With an 18-105mm range, you can take all kinds of photos ranging from landscapes to portraits. The constant f/4 aperture and 3-speed variable zoom makes filming a breeze and a lot of fun as well. It really makes the movies a lot more pleasing to the eye when you add a nice slow zoom and panning effect for example. When using a camera slider, you can really get some special effects with a little practice and patience.” -SonyAlphaLab

The wide end is particularly valued by landscape photographers so it’s no surprise that the Sony E 10-18mm f/4 OSS is a favorite of the landscape photography community. It’s stabilized, tack sharp and it gives a field of view approximately equivalent to 15-27mm. For anyone looking to keep their gear as small and light as possible, the 10-18 has a minimal footprint (2.75- x 2.5-inches) and weighs less than 8 ounces. The lens can be found for around $848.

“When you only have so many lenses for a camera system, you have got to make the new ones count. In this case I believe Sony has done just that with its new 10-18mm f/4 e-mount lens for the NEX system. Personally, I don’t think I could have asked for a better APS-C companion to my Nikon 16-35mm f/4. If you are looking for that niche super wide lens, this may be the next addition to your kit.” -ThePhoblographer

“The Sony 10-18mm f/4 Wide-Angle Zoom Lens is a great option for NEX owners who are in need of a wide-angle zoom. It makes it possible to captures images that are significantly wider than any other lens in the system, and its performance is impressive.” -PCMag

“I use this lens almost more than any other for my Sony [APS-C camera]. It’s not really a 10-18mm, btw, if you’re into this hardcore crop-factor stuff. It’s actually 15-27mm with the 1.5 crop factor. That is still plenty wide for almost any landscape situation. My previous camera was the Nikon D800, and my favorite lens for that was the Nikon 14-24mm, and this Sony lens is comparable in almost every way.

“As you can see in [this] video, the [10-18mm f/4] lens is my surprising favorite! I didn’t really expect it to be equal in sharpness and quality to its bigger full frame counterpart.” –Trey Ratcliff

“The bottom line for the Sony E-mount 16-70mm f/4 OSS Zeiss Lens review is I highly recommend it! It totally holds up to the Zeiss badge and you get what you pay for in build quality, design, and most importantly, performance.” -SonyAlphaLab

Part of being a sleeper is just being an excellent value for the money. The Sony E 55-210mm f/4.5-6.3 OSS is one of the best values you’re likely to find in a lens. Coming in around $348, it’s an optically-stabilized lens telephoto-zoom that has an effective reach of 83-315mm. And it’s sharp. Really sharp (see the reviews below). The tradeoff is the variable aperture, but as sleepers go, this one is a no-brainer.

“The Sony NEX 55-210mm F/4.5-6.3 OSS lens is relatively inexpensive, and provides image stabilization, super quiet focusing, and a useful zoom range. Considering the price point of this lens, the optical performance is generally strong throughout the focal range, especially at the long end, which is probably where most people will be using it if they have the standard kit zoom available too.” -Kurt Munger

“One thing I always seem to end up saying to myself when I review a Sony lens is, “Damn this lens is sharp”. Well, I said that again when using the Sony 55-210mm lens.

“In the end I would highly recommend this lens to anybody that has a NEX camera system. The proof is in the pudding and by all of the sample photos I included above I’m confident you will come to the same conclusion.” -SonyAlphaLab

The lens that might define sleeper more than any other in the Sony lineup is the E 50mm f/1.8 OSS. Not to be confused with the FE 50mm f/1.8, the E 50 f/1.8 was originally built for the NEX line and it’s still offered in black and silver finishes. The E 50mm f/1.8 OSS might be seen as just another moderately fast 50 if it wasn’t for the one feature: OSS. The built-in stabilization makes this lens a lightweight, handheld street and portrait standout. It’s 75mm equivalent angle of view is in the 75-85mm sweetspot for portrait photography and the $298 price makes it a lens that can have a home in your bag without rattling your checking account. And it’s super-sharp. Because the lens was introduced in 2011, it’s fallen off the radar screens for many, including the press, but the reviews below are every bit as relevant today as they were when the lens was introduced. You could substitute “α6000 or α6300” for “NEX” and you’d be pretty spot-on.

“Basically this lens is a must have for any NEX shooter who wants a medium telephoto with a fast aperture. The lens has great color, has a fast aperture for shallow depth of field or when the lights get low and the lens pumps out great color with rich saturated tones.” -SteveHuffPhoto

“It is nice to have a sharp ultra-large aperture lens but it is also important to have a very smooth bokeh (quality of the out-of-focus blur) which is simply part of the character of such a lens. The Sony E 50mm f/1.8 OSS delivers superb results here - which is really a rare quality at this focal length!” -PhotoZone

“I was extremely impressed with the 50mm f1.8. Of all the lenses I’ve tested so far, it by far has the best image quality for the system. The fact that I was able to use it for a professional product shoot also blew my mind away.” -ThePhoblographer

Most of the lenses in this article are E lenses—designed for APS-C coverage—the Sony Sonnar T* FE 35mm f/2.8 ZA is the exception. It’s a full-frame 35mm Sony-ZEISS with a moderate f/2.8 maximum aperture. This lens is a workhorse. Why did we include it here? It’s a prime lens in a classic focal length that’s tack sharp. That’s what it does. That’s all it does. And it does it really, really well. It’s the run of the mill 4-door sedan with the bigger engine and stiffer suspension for the driver who wants performance, but not flash. The blue Zeiss badge on the lens barrel is like quad exhaust tips—a subtle marker that this isn’t the plain old base model. Available for around $798.

“Distortion? What distortion? The Sony FE 35mm ƒ/2.8 does very well at controlling distortion, on both full-frame and sub-frame cameras, such that, like we saw with chromatic aberration, it's practically undetectable.

“With seven aperture blades, weather sealing and one of the most mind boggling lens hoods in the industry, this is a lens that you’ll most likely fall in love with due to its pure performance in the right situations.

“On the α7 it will focus like a speed demon. On the α7R it will resolve more detail than your mom will want to see in her face. Then when you’re all done with that, you can take it out into inclement weather with no problems.” -ThePhoblographer

“Offering fast and reliable auto-focusing on the α7 camera that we tested it with, intuitive manual focusing and the usual Carl Zeiss levels of build quality that's weather-tight too, this moderate wide-angle prime lens is our pick of the five FE lenses that were launched along with the α7/α7R cameras.” -PhotographyBlog 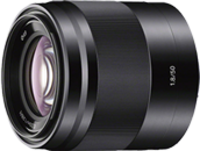