This summer I got the opportunity to work with Citta, a non-profit charity organization "focusing on methods that help build and support development in some of the most economically challenged, geographically remote or marginalized communities in the world."

In June, we went to Nepal for eight days. Citta's goal was to bring medical care and supplies to the earthquake-affected and most remote villages in Nepal. I was there to photograph the aftermath of the two earthquakes that hit earlier this year.

Our base was in Kathmandu and from there we traveled to three separate villages. Getting to each village took at least ten hours. We would drive on extremely rough, unpaved roads and encountered many delays from flat tires, landslides (caused by aftershocks from the two earthquakes) and on one occasion our Nepalese driver hit a motorcyclist and nearly killed him.

I remember noticing as we drove through the countrysides that not one house or shop had survived the earthquakes unscathed. Massive holes, rubble and debris everywhere, thin pieces of scrap tin metal were being used as make-shift roofs. Total devastation.
Once we got as close as we could in the cars, we would then trek for miles, usually up mountain paths, and cross rivers using canoes made of tree logs to finally get to each destination.

First Mazegaoun, then Gorkha and then Baseri. All three villages were in ruins. Without electricity, the people in them live completely off the land. The steady supply of water from monsoons provide food and drinking water. But because all in are in such remote locations, they don't have the medical supplies to treat injuries or sicknesses and are too far from hospitals to get proper care.

That’s why Citta is presently working on building health posts (small hospitals) in the areas of Nepal where people don't have access to even the most basic medical treatment. Something as simple as a little boy breaking his arm can leave him permanently deformed and disabled. The people who live in these remote and earthquake-affected areas need, at the very least, some form of basic medical care near them and they've never needed it as much as they do now. Click here to learn more about Citta. 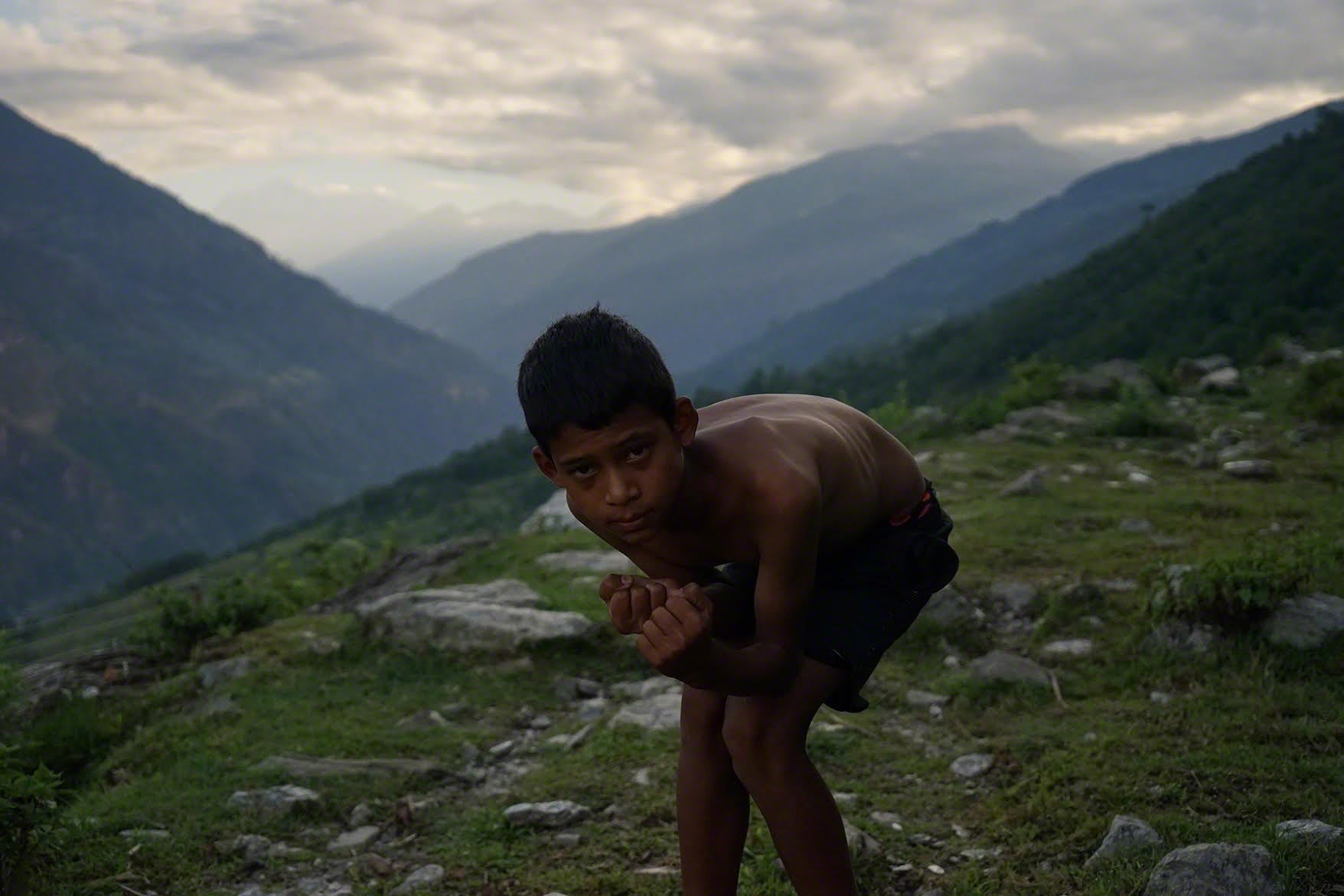 Hari was my tour guide in Baseri, one of the poorest and most remote villages in Nepal. He's thirteen years old. When he was six, he fell walking to school and broke his arm. Because there are no hospitals anywhere near his village, he was only given a cloth sling to wear. When his father had saved up enough money, he took him to Kathmandu, a two-day long trip, to get it treated properly. Not knowing that Hari needed surgery, his father was unable to afford it and they had to come back. His arm is now permanently disfigured.

While we waited for the sun to come up, I played music on my iPhone. Not gonna lie, we were jamming pretty hard to Daft Punk. He handled bass (whistling) and I had drums (hand clapping). 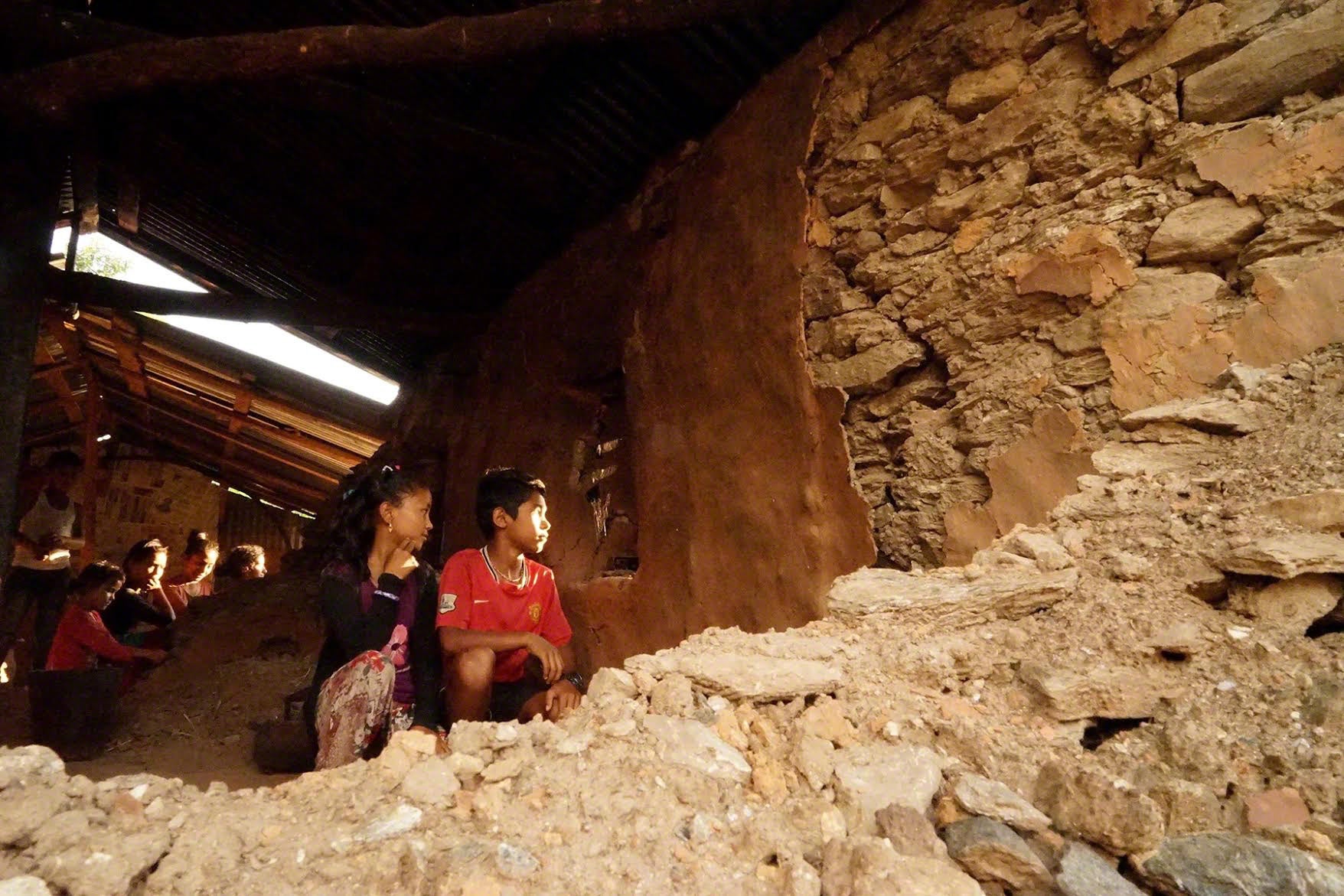 When I was a little boy, my mom would take my brother, sister and I up to her country house on the weekends. I remember those drives. Staring out at the sky and the clouds. Dreaming.

Driving through the country would often overwhelm me with a sense of wonder. I would dream of far-off places and heroic adventures, imagining that I was someone important, someone who was coming to help. And I’d promise myself that when I grew up and was strong, I would go on these adventures, to lands I had never heard of and people I had never seen. 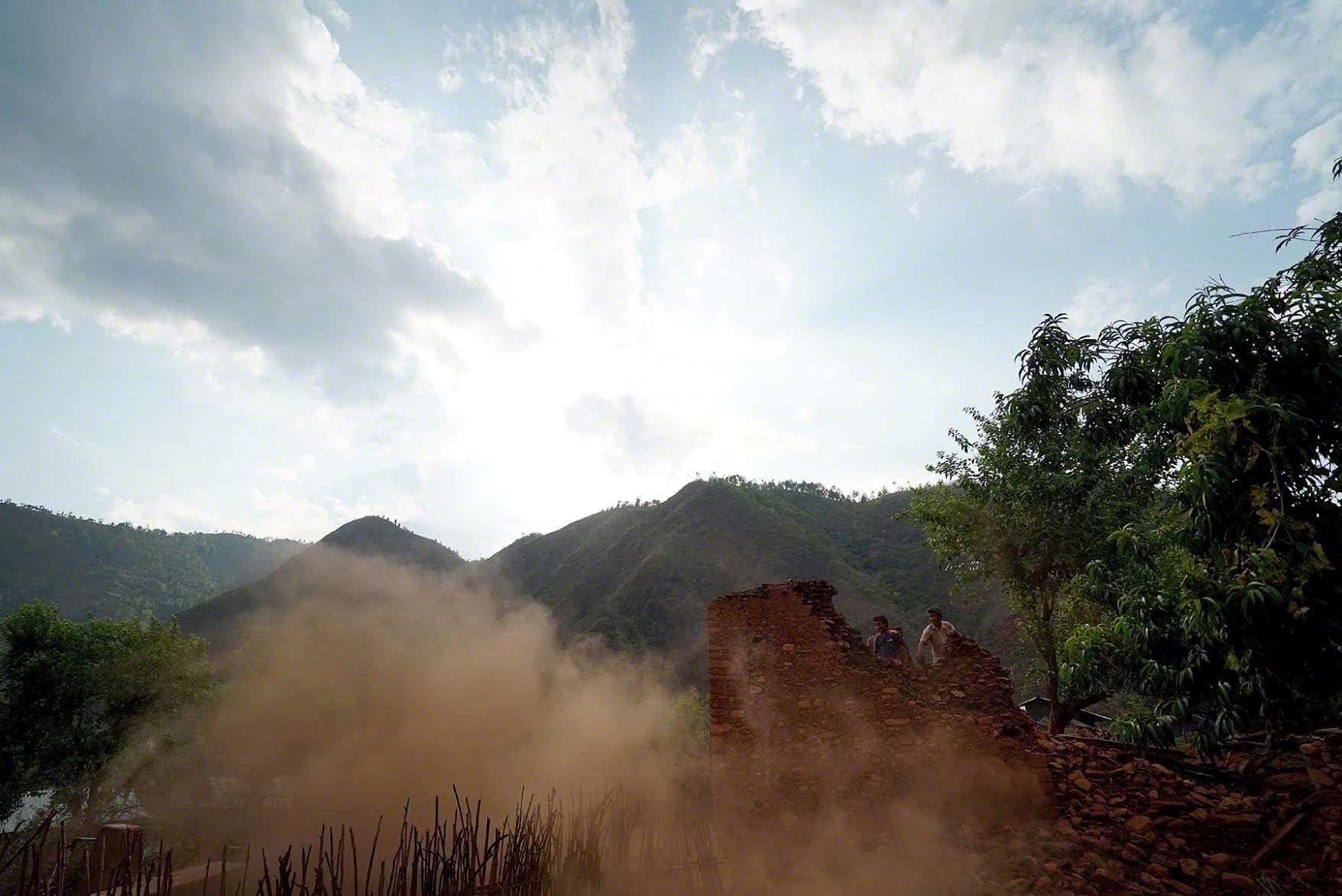 An aftershock hit right before I took this photo. Most of the house collapsed into rubble. And then I fell backwards into a pig pen, which was not fun. Funny for everyone else, not so much for me.

The man who lived there was laughing and I couldn't believe that he could be joking around after his house was destroyed. I had someone ask him why he wasn't more upset and he shrugged, smiled and said, "What can you do?” 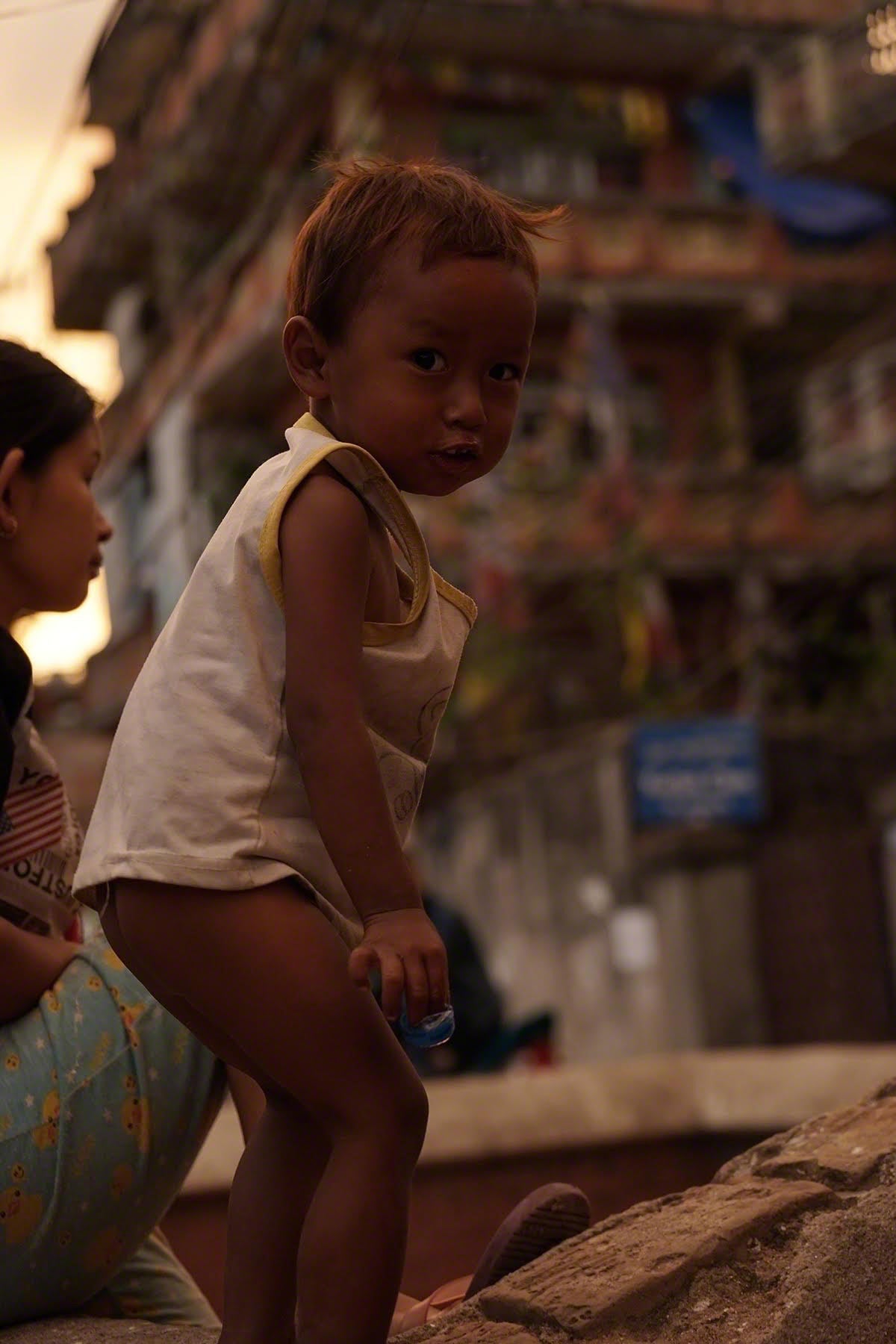 Children suffer in countries around the world when they don't have to. They suffer because they don't get proper medical treatment. They get sick and stay sick. Their broken bones don't heal.

A child's place of birth should never determine his or her value. His or her right to live.

"For it's the greatest poverty to decide that a child must die so that you may live as you wish." — Mother Theresa 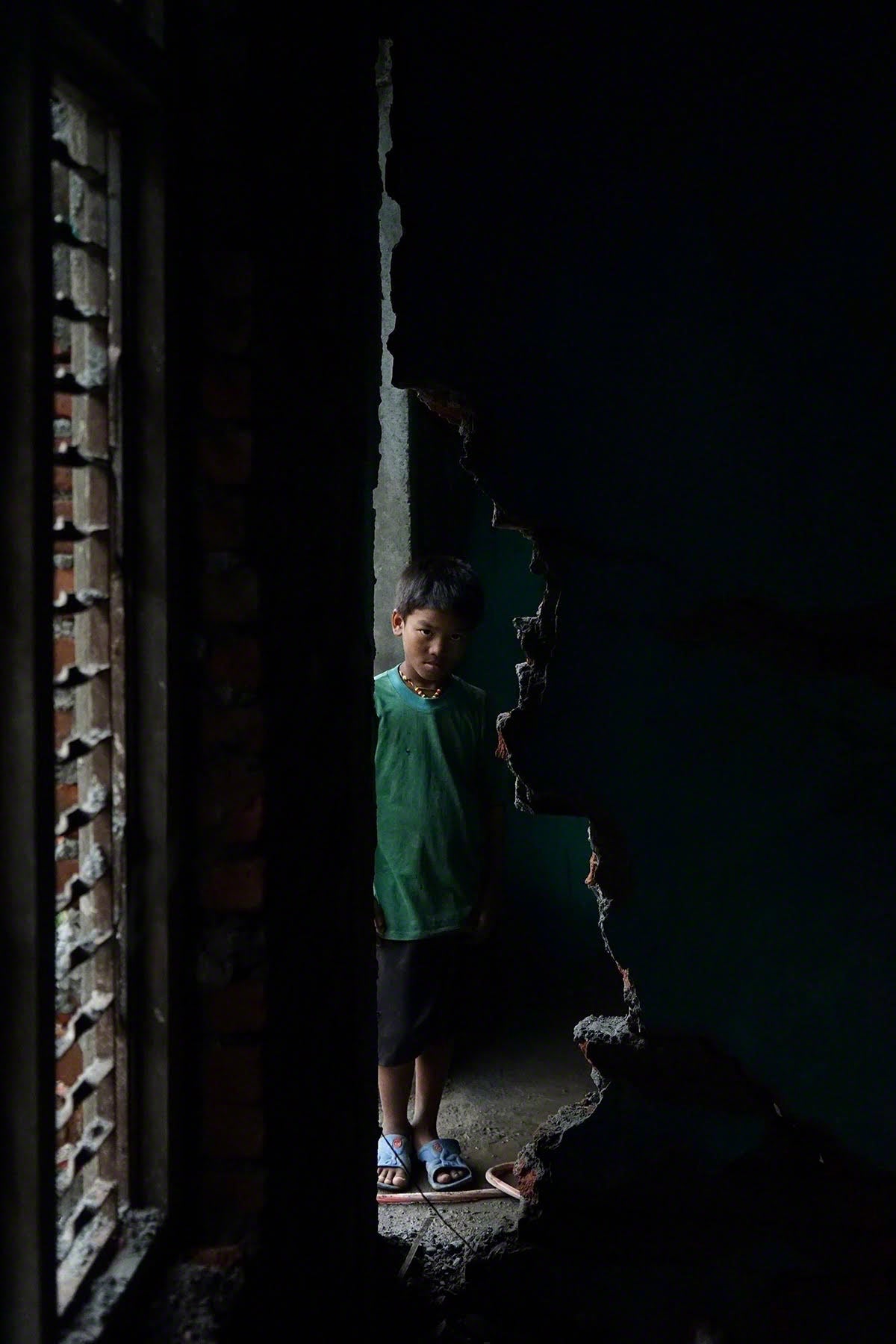 As I looked around this abandoned house, a little boy came through the side. He just stood there and stared at me. He was suspicious of what I was doing there.

From what I have learned and read, the government in Nepal is doing very little to help its people. Many of these people seem to have accepted this, accepted that basically no one is looking out for them. I think acceptance of what you can't control is probably the best way to move on with your life.

But I imagine there are some people there who have not accepted this, who believe that they deserve better. And I think that's what I saw in the boy's eyes: Pride. Distrust. Disillusionment. 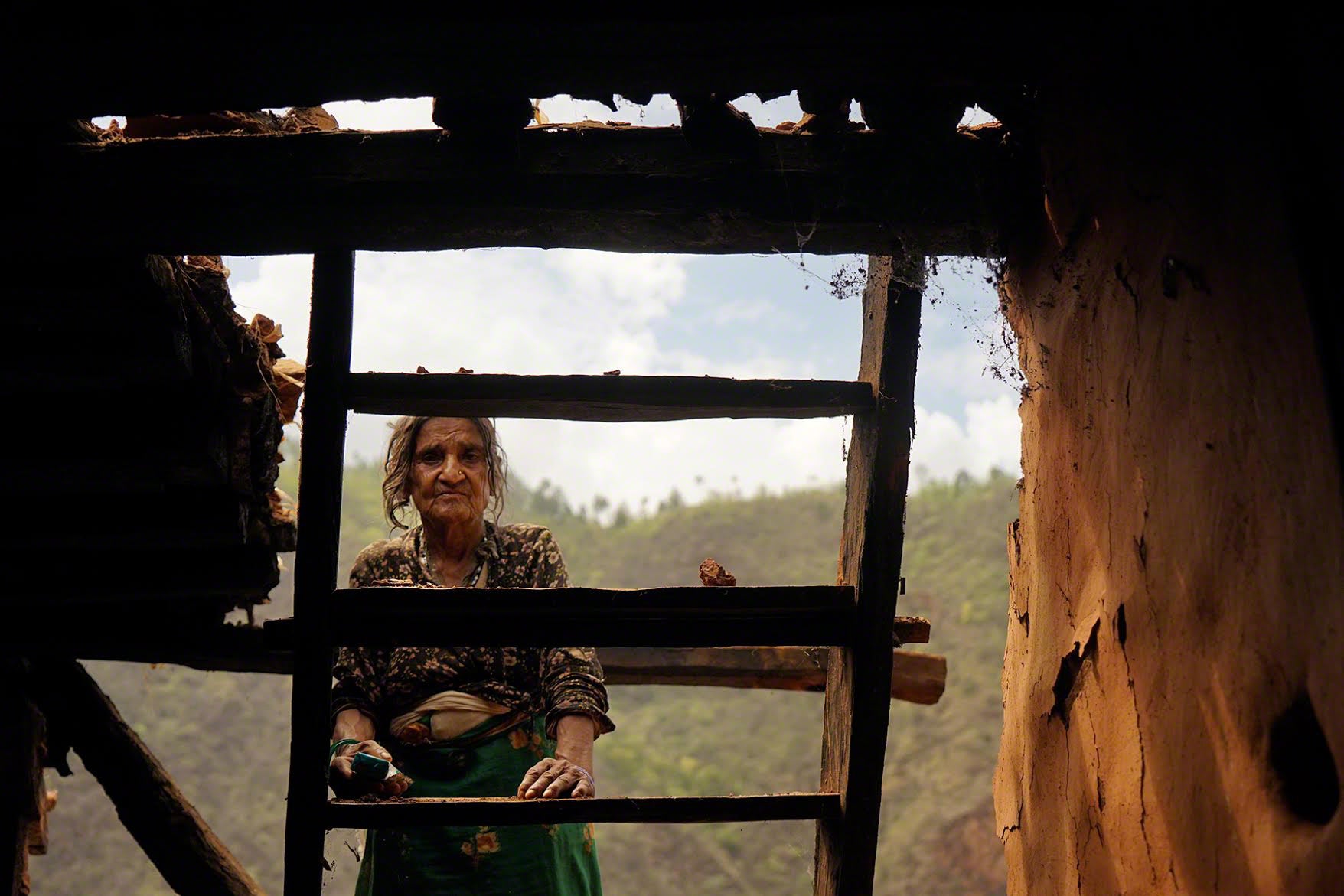 I remember thinking when I took this photo how the cracks in the wall mirrored the wrinkles of this woman’s face.

I felt a sense of pain from her, of hardship. But there was beauty as well. Seeing her sadness and envisioning what her life must have been like made her more beautiful in that moment. It occurred to me then that the images I had found most meaningful, the images that had left the deepest impression on my soul, were ones in which pain and beauty were intertwined.

I read a Yeats poem recently that transported me back to that moment, to the woman who stopped to look at me as she climbed the ladder to her house.

Those masterful images because complete
Grew in pure mind, but out of what began?
A mound of refuse or the sweepings of a street,
Old kettles, old bottles, and a broken can,
Old iron, old bones, old rags, that raving woman
Who keeps the till. Now that my ladder's gone,
I must lie down where all the ladders start
In the foul rag and bone shop of the heart. 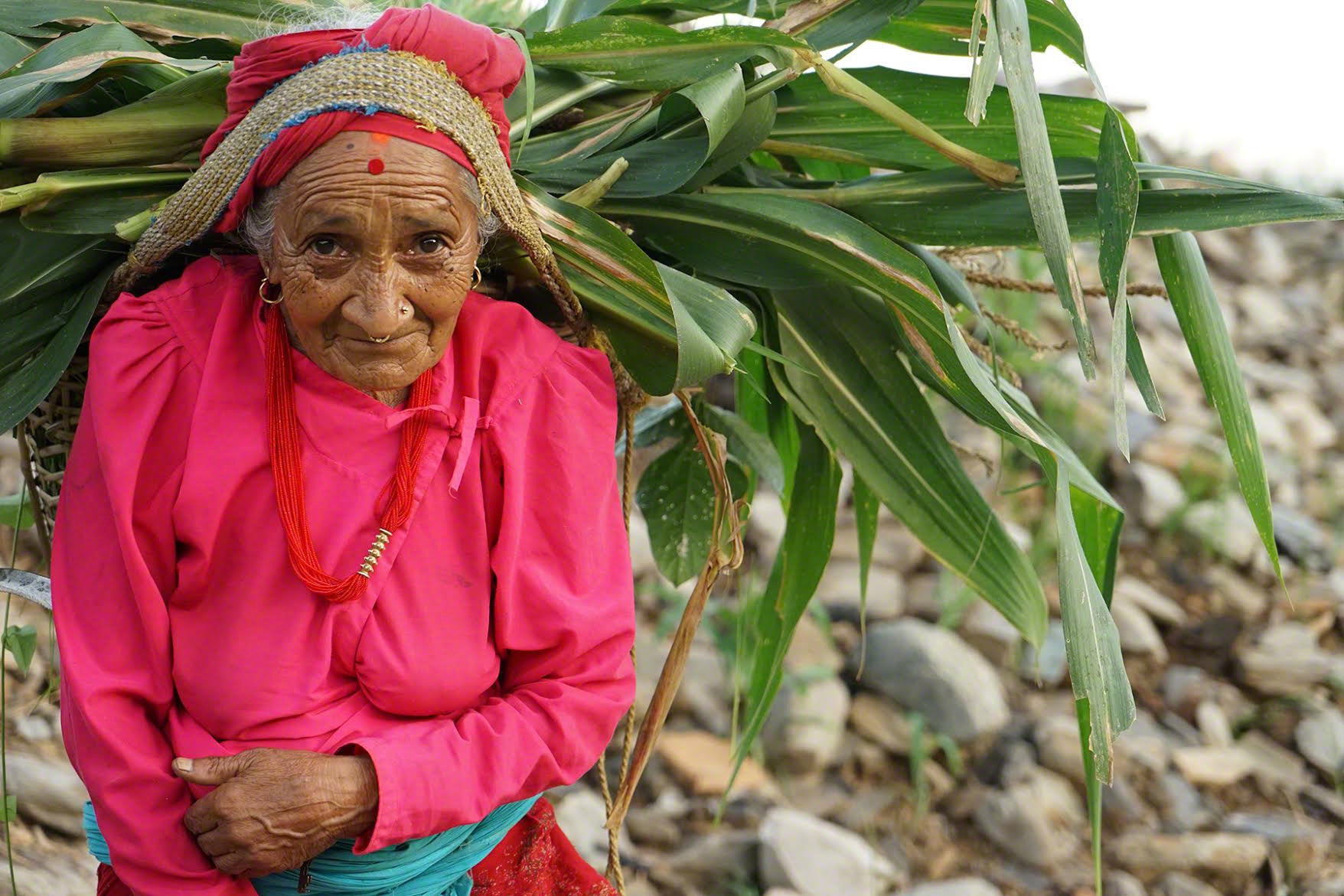 I walked past this woman on the road to Gorkha, a small village in the mountains. I immediately turned around, and ran back to her. I showed her my camera and asked if I could take picture of her. She stopped, and looked at me excitedly.

There was something about the way she carried herself, something about the clothes and jewelry she was wearing. A spirit of youthfulness I had not seen in many women her age. She stood there softly but unafraid. When she smiled, I saw, at once, what kind of person she was deep down.

Here was more than an old woman who had persevered through many difficulties, here was simply a woman who knew how to love life.