We photographers can go to great lengths to capture images. A couple of days ago, I admittedly almost went too far!

Gary Hart and I had taken our workshop group to the Grand Canyon’s north rim for a sunset shoot at Cape Royal. I’ve photographed this incredible location numerous times in the past five years. As the sun began to lower, I had made my rounds checking on our workshop participants and then decided to check out a location that I had not tried before.

At first, I spotted some yellow wildflowers and tried working a composition low to the surface with the last light of the day skimming the prominent features of the Canyon. It was a nice image, but I challenged myself to find something else. 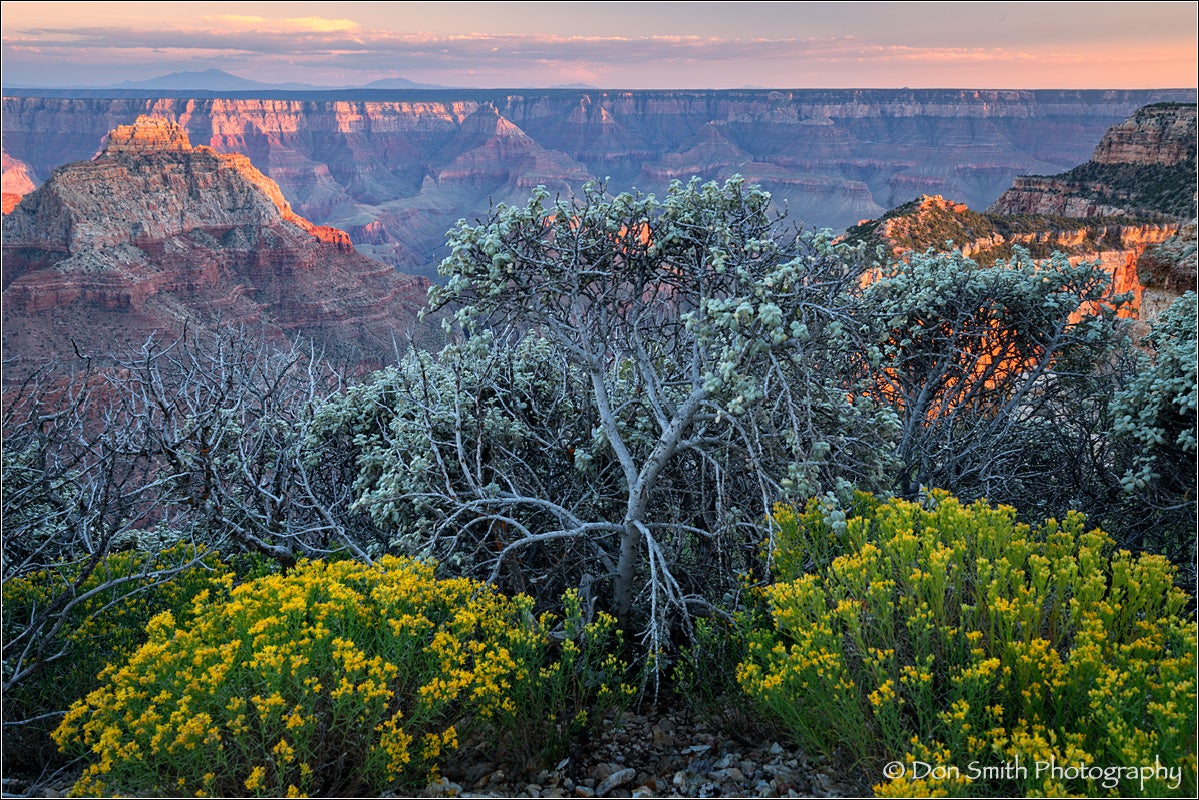 As I was looking around, the setting sun dropped under a bank of clouds and cast its warm light on the north-facing side of Wotans Throne. Immediately I knew that I wanted to capture that light but I wanted a foreground element. What I spotted was a beautiful Cliffrose bush (think small tree) but it was rooted literally two feet from the edge of a 2,000 foot vertical cliff. Heights have fortunately never bothered me, but the path to the bush was broken white kaibab shale on a down-facing slope.

I knew that I had to make up my my mind quickly before the light faded off of Wotan. I was wearing my new Merrill hiking boots and thought if I used my tripod as a walking stick and leaned into the side of the hill, that I could slowly make my way down the slope. In fact, I told myself, “if you start to slip, fall into the hill and grab onto the backside of the chaparral bush that you see in the image above.”

What I spotted was a beautiful Cliffrose bush (think small tree) but it was rooted literally two feet from the edge of a 2,000 foot vertical cliff. Heights have fortunately never bothered me, but the path to the bush was broken white kaibab shale on a down-facing slope. All went to plan and I made my way down to the Cliffrose and was actually standing on a level potion of the shale literally three feet from the Canyon wall. As you can see, the light held, the wind died down, and I made my image.

Now I needed to get back up the slope. Again, I thought through my process of what was the best exit route and then began my way back up the kaibab shale (the same way I came down). As I neared the top of the slope (no more than five feet from the top of the rim), my right foot slipped out from under me. What I remember was that I instinctively threw all of my weight onto my left leg and then pushed off as hard as I could. Fortunately my foot held firm and two steps later, with my pulse racing and my adrenaline coursing through my body, I made it to level ground.

Then the realization of what almost happened hit me and I decided it was time to sit down and say a prayer of thanks. I glanced back down the slope and realized I had made a very poor (actually stupid) decision. If my left foot would have slipped, I had nothing to grasp onto and would have surely slid to my death.
Next came the stern talk with myself that we all do after making a bad choice: “What were you thinking? You have a wife and two sons at home! Was it that important to get that image and risk your life? You are not a kid anymore…”

What bothers me most was the realization that this was not the first time I have made a poor decision when trying to make an image. It’s almost as if I go into a reactionary mode and damn the consequences. I’m not sure why I do this – I’ve been lucky a number of times but sooner or later my luck can and surely will run out.

I guess that I am sharing this story with you more as a tale of what not to do. I know personally I need to look at the bigger image (pardon the pun) and let certain images go. We all have a certain level of comfort when we are out in nature and we all need to listen to our inner voice. I’m hoping that you will listen to your inner voice and not risk your life chasing an image. I somehow need to find the volume switch on mine before it is too late.