This article is part of a series on post-production workflow with Capture One. As a Sony camera owner, you get Capture One Express (for Sony) with your purchase. This series of articles will show you how to get more out of the software. Of course, you don’t have to be a Sony shooter to make use of these tips. They’re for anyone who wants to use Capture One.

Unless you always have the optimum viewpoint, or carry around a huge set of ladders with you, it’s inevitable that some of your images will benefit from perspective correction. This can be achieved by trying to manually “eye” it in, but Capture One can assist you in correcting your images accurately and easily. 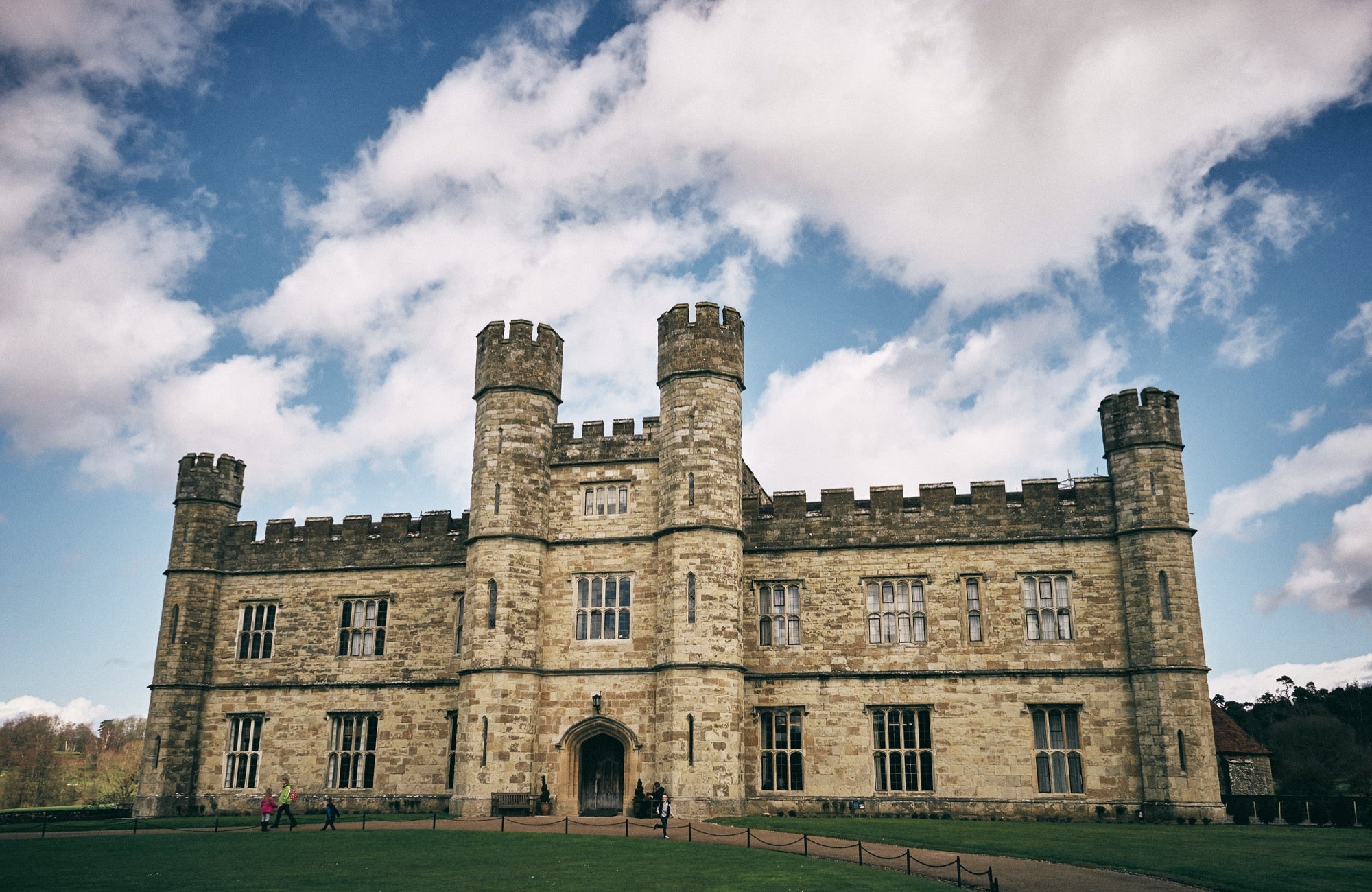 The Keystone Tool, found in the ‘Lens’ tooltab

Simply by dragging the Vertical and Horizontal sliders we can manipulate the perspective, but its easier, faster and more accurate to let Capture One figure it out for you. In this example, shot with the Sony a7 and the FE 28-70mm lens at the widest setting, Capture One has already corrected the lens distortion automatically in the Lens Correction tool. 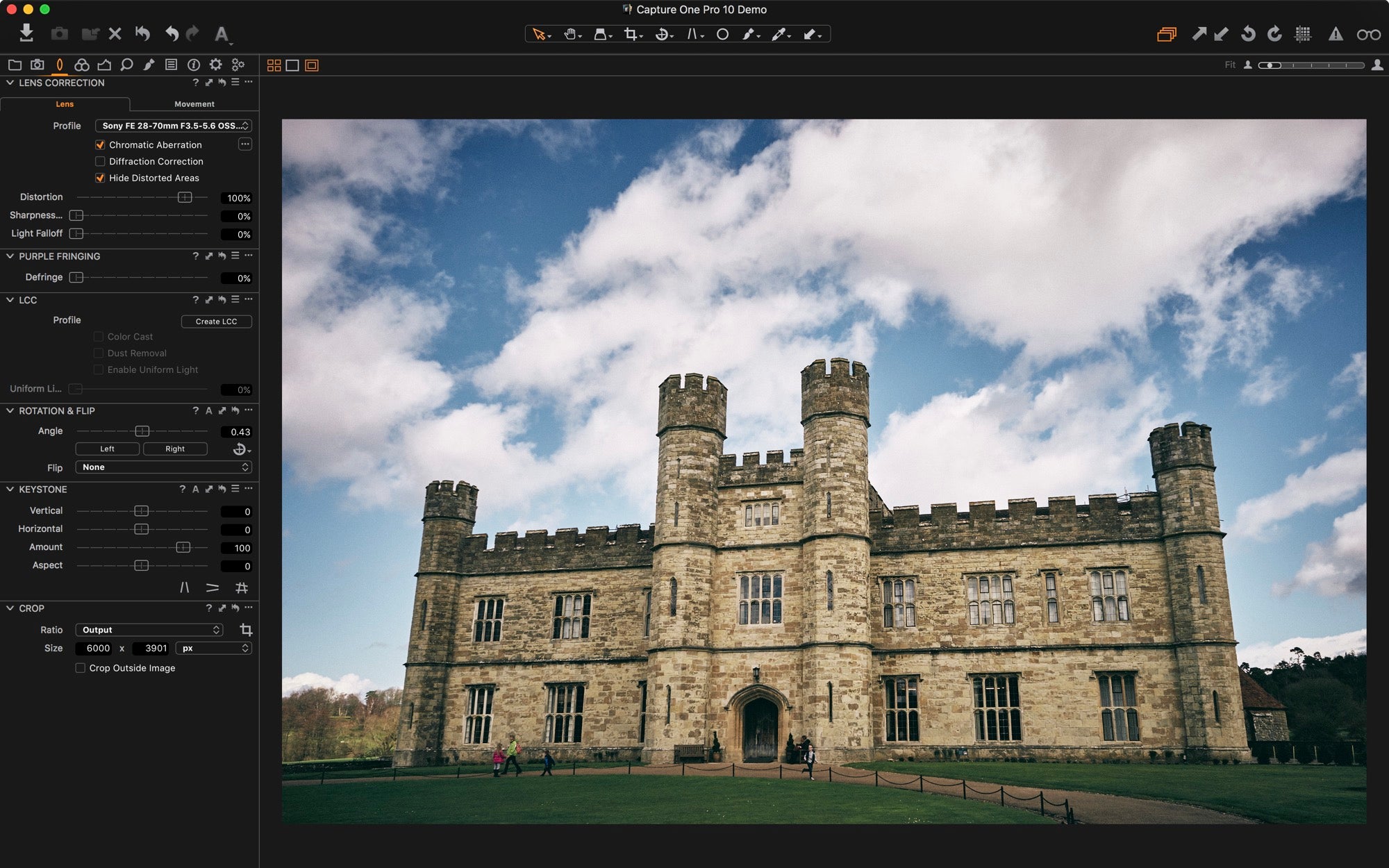 Here's our photo opened in Capture One, ready for perspective correction.

As the camera is pointing at an upward angle to get the full castle into the frame, the building has the typical “falling down syndrome” of converging vertical lines. In the Keystone tool itself, there are three cursor tool icons to correct for Vertical, Horizontal or both aspects of Keystoning. Selecting any of these will allow you to describe the “error”, which Capture One will then use to calculate the correction.

For example, clicking on the first icon (Vertical Correction) super-imposes two vertical lines on the image, with an “Apply” button in the center. These lines need to be placed on the assumed vertical line of your object (in this case, the castle walls, so Capture One can calculate the necessary transform. To move the lines, click on the orange circles at either end. 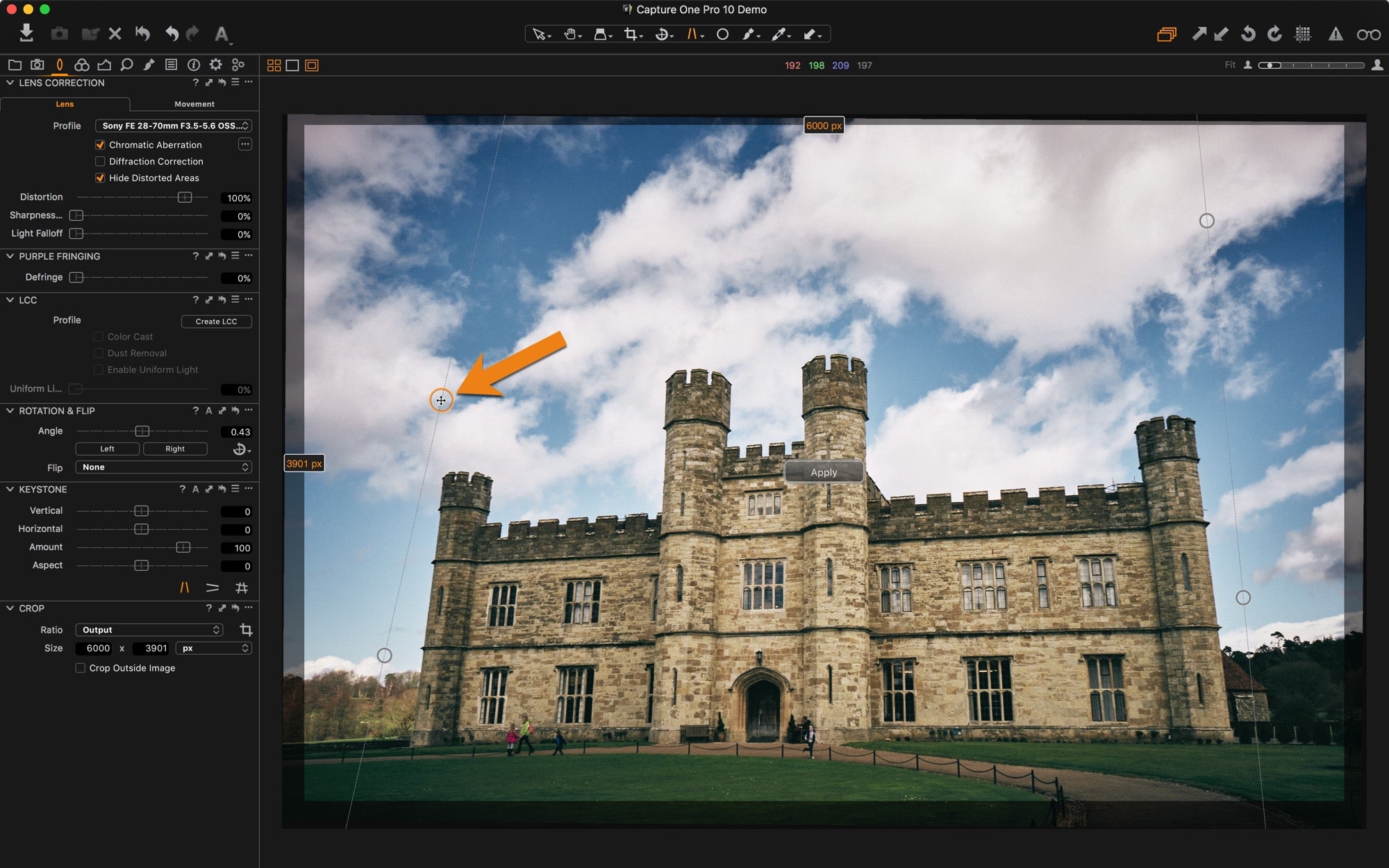 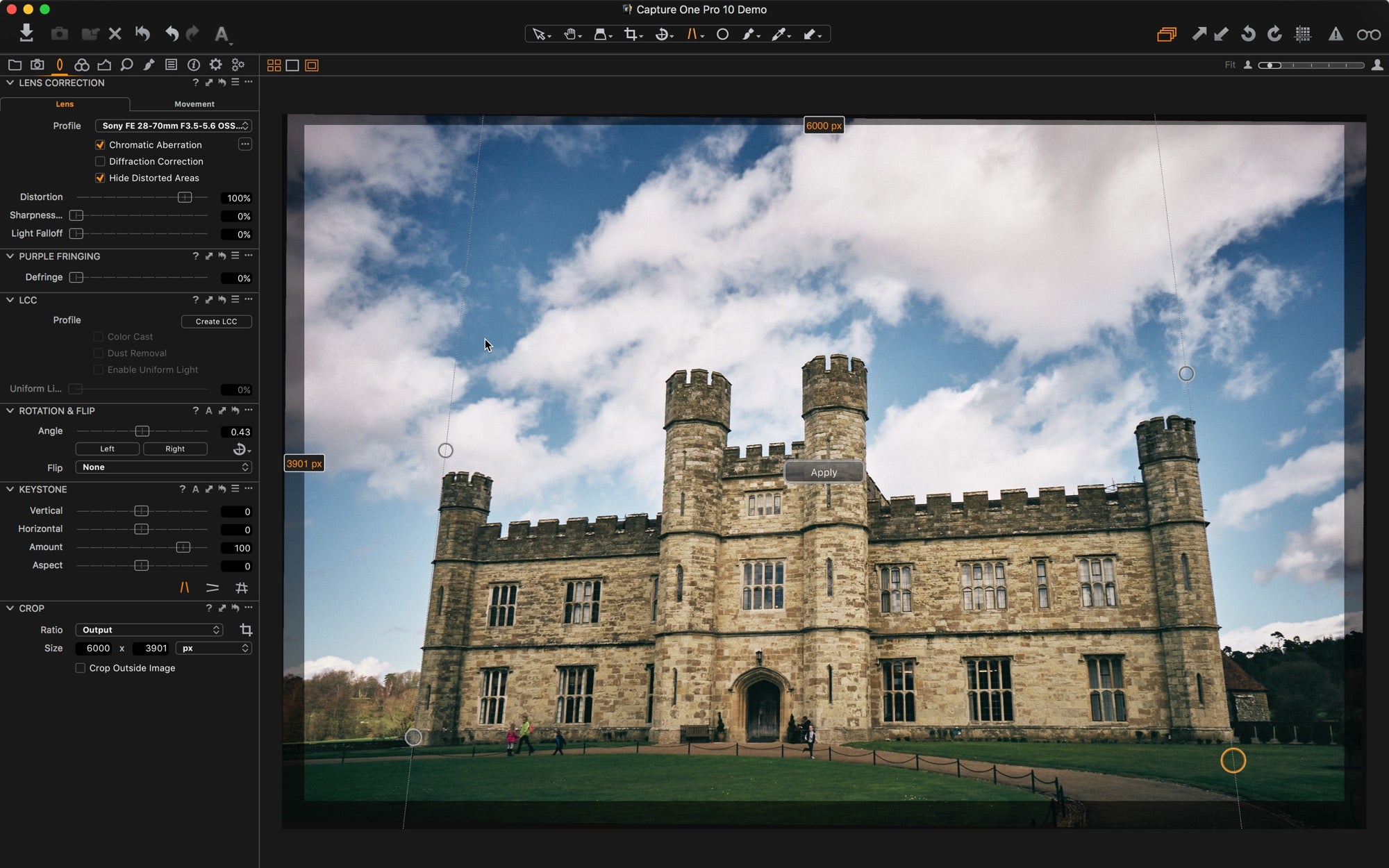 Finally, click on the “Apply” button in the centre of the viewer to apply the correction. 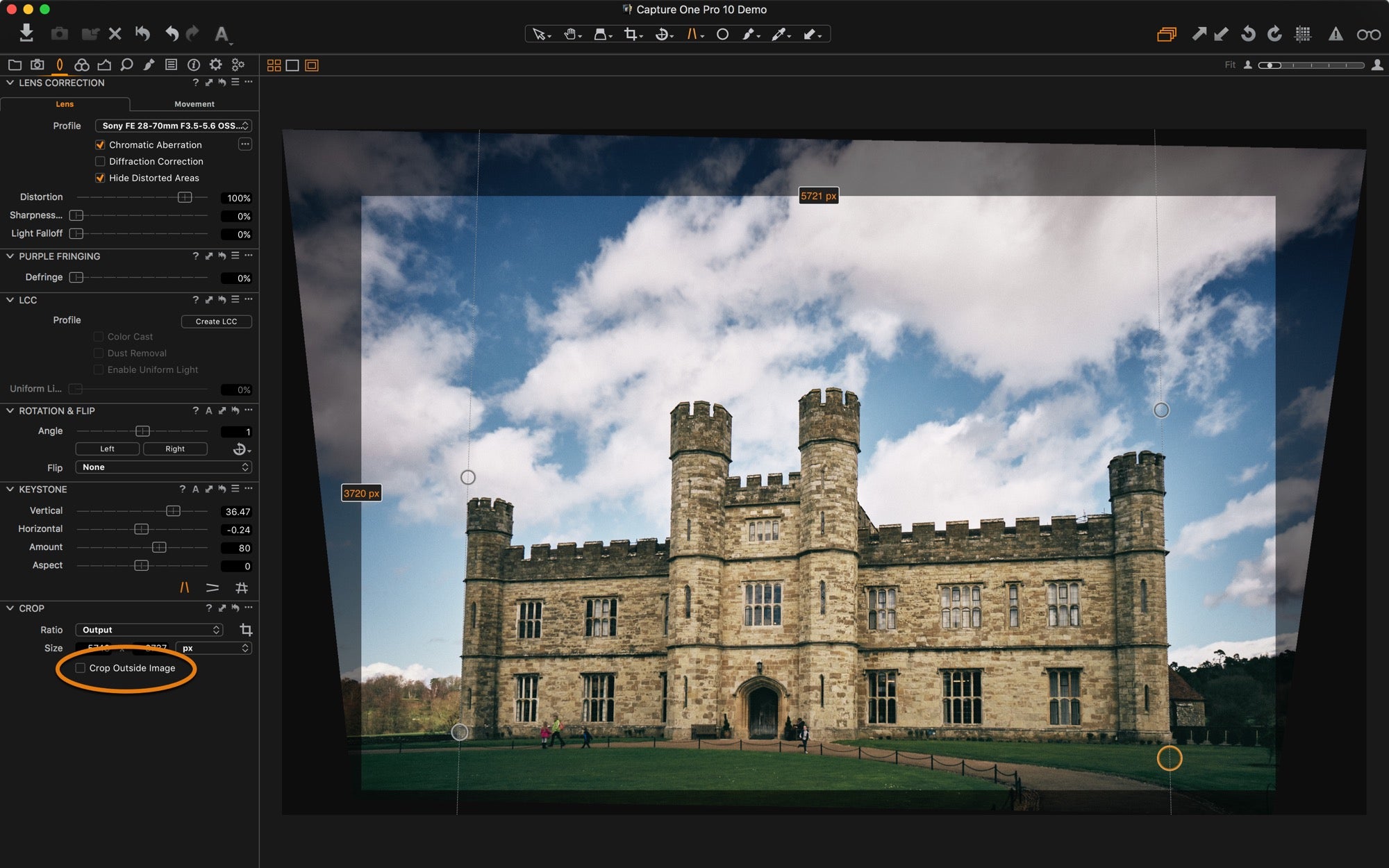 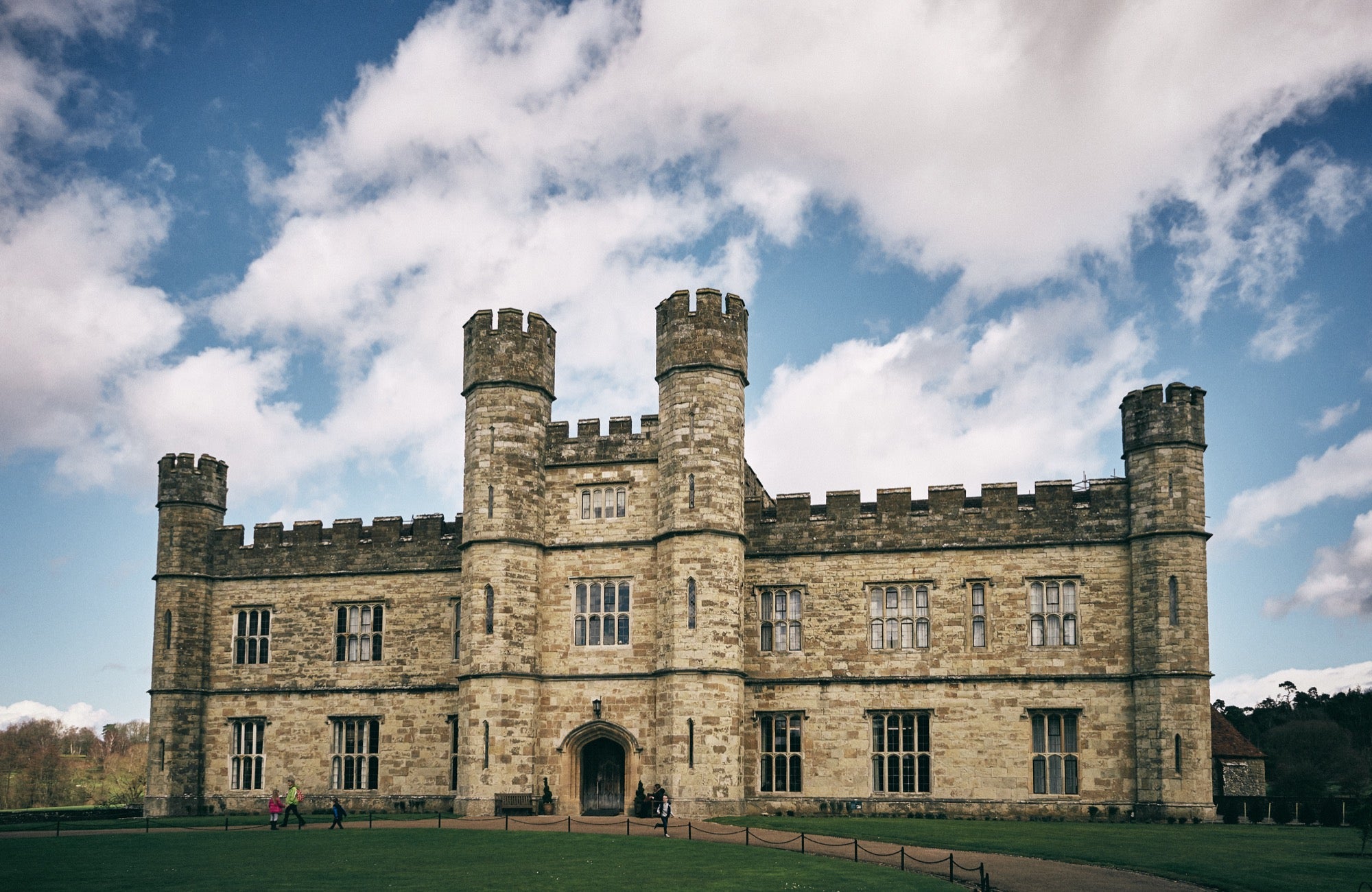 Note, if you want to crop “beyond” the normal boundaries of the image, check the “Crop Outside Image” box indicated in Fig. 6. This can be useful if the correction is quite strong and you need a few extra pixels. Dragging the “Aspect” slider can stretch the image in either direction if the correction has made the object look a little too tall or short. By default, the amount of correction is set to 80%. A complete correction of 100% can look a little unnatural as the human eye expects some degree of converging verticals on taller objects. For horizontal or a combination of horizontal and vertical keystoning, the same principals apply, just choose the corresponding cursor tool.

The Keystone tool with automatically calculated values. Note, by default the Amount slider is set to 80%

If you're just getting satrted with Capture One, check out this tutorial.

Post Tips: Add Punch To Scenics With This One-Click Capture One Solution

Post Tips: Add Punch To Scenics With This One-Click Capture One Solution