Neil Leifer is in rare air at the top of the pyramid of sports photography. In the same way that you can say the name Ansel Adams to anyone and they immediately imagine black and white photographs of Yosemite Valley, Neil Leifer’s name is recognized and synonymous with some of the greatest moments in sports history.

And he’s also the newest Sony Artisan of Imagery.

Why did Leifer adopt the Sony system after so many years with other cameras? He describes the first time he held and used a Sony α7, “The first thing that came to mind was the Sony weighed half of what my Nikon weighed. I looked through the camera, and I noticed the incredible quality of the Sony Zeiss lenses. Now, I had Zeiss lenses on my Leica's years ago so I know how good they are.

“I decided I really wanted to try it out, so I got in touch with Sony, sourced a loaner camera, tested it while shooting boxing and completely fell in love with it! The weight and the quality of the photography…I thought, this is definitely the way of the future. I know a good camera when I have one in my hands.”

Neal Manowitz, Vice President of Digital Imaging at Sony Electronics, added "We're honored and excited to welcome Neil Leifer to the Sony Artisans of Imagery. In addition to playing a role in Leifer's on-going work as a filmmaker and photographer, we're looking forward to his input and guidance as we work to support both the current and future needs of enthusiasts and professionals."

See more about how Leifer became a sports photographer and photojournalist in an exclusive interview with AlphaUniverse.com. We talked about his love of photographing sports and news stories, how he made some of the most iconic photographs in history, his long association with Muhammad Ali and what’s next for the new Sony Artisan of Imagery. 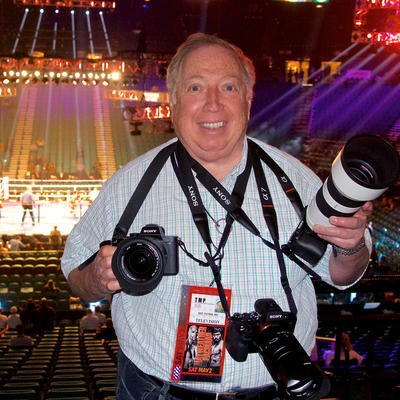 Neil Leifer’s photography career has spanned over 50 years since becoming a professional while still in his teens. Beginning in 1960, his pictures regularly appeared in every major national magazine, including the Saturday Evening Post, Look, LIFE, Newsweek, Time and, most often, Sports Illustrated.

Leifer eventually became a staff photographer for Sports Illustrated before leaving in 1978 to become a staffer for Time magazine. In 1988 he was made a contributing photographer at LIFE magazine and spent the next two years dividing his time between Time and LIFE. When Leifer left Time Inc. in 1990, his photographs had appeared on over 200 Sports Illustrated, Time, and People covers—at that point, the most ever published of one photographer’s work in Time Inc. history. Neil Leifer is the 2006 recipient of the prestigious Lucie Award for Achievement in Sports Photography. In 2008 he was honored for his outstanding contribution to Time Inc. journalism with The Britton Hadden Lifetime Achievement Award.

Leifer has published 16 books, 9 of which have been collections of his sports photographs. Sports, his 1978 Abrams book, is considered by many to be the quintessential sports photography book. Ballet in the Dirt and Guts and Glory—both published by TASCHEN, showcase the very best of Leifer’s professional baseball and football photographs. Leifer's memoir “Relentless” was published in 2016.

Leifer has traveled all over the world on sports assignments. He has photographed 16 Olympic Games (7 winter and 9 summer), 4 FIFA World Cups, 15 Kentucky Derbies, countless World Series games, the first 12 Super Bowls and every important heavyweight title fight since Ingemar Johansson beat Floyd Patterson in 1959. He has photographed his favorite subject, Muhammad Ali, on almost 60 different occasions—covering his biggest fights and over 30 one-on-one studio sessions.

While Neil Leifer is now a full-time filmmaker, producer and director; there is a very good chance that you’ll spot him, camera in hand, at any big championship fight. “Boxing” says Leifer “is the one sport I still love shooting.”