Night photography always requires some level of compromise: extra equipment, ISOs a little too noisy, shutter speeds a little too long, f-stops a little too soft. For years the quality threshold beyond which I wouldn’t cross came far too early and I’d often find myself having to decide between an image that was too dark and noisy, or simply not shooting at all.

I started doing night photography as a Canon shooter, so my first night lens was a Canon-mount Zeiss 28mm f/2.0 – it did the job but wasn’t quite as fast or wide as I’d have liked. After switching to Sony I added a Sony-mount Rokinon 24mm f/1.4 – I loved shooting at f/1.4, and 24mm was a definite improvement over 28mm, but I still found myself wishing for something wider. And the Rokinon had other shortcomings as well: because the camera doesn’t even know the lens is mounted (f-stop set on the lens, not in the camera), I always had to guess the f-stop I used to capture an image. Worse than that, at f/1.4 the Rokinon had pretty significant comatic aberration that made my stars look like little comets.

Since switching to Sony, one compromise I’ve happily made is carrying an extra body that’s dedicated to night photography. Because the Sony α7S and (later) α7S II are just ridiculously good at high ISO, I was able to compensate for the Rokinon’s distortion by stopping down to f/2 or f/2.8 at a higher ISO. The α7S II is worth the extra weight, but I’ve longed for the day when I could replace the Rokinon lens with something wider, and something that had a better relationship with my camera. 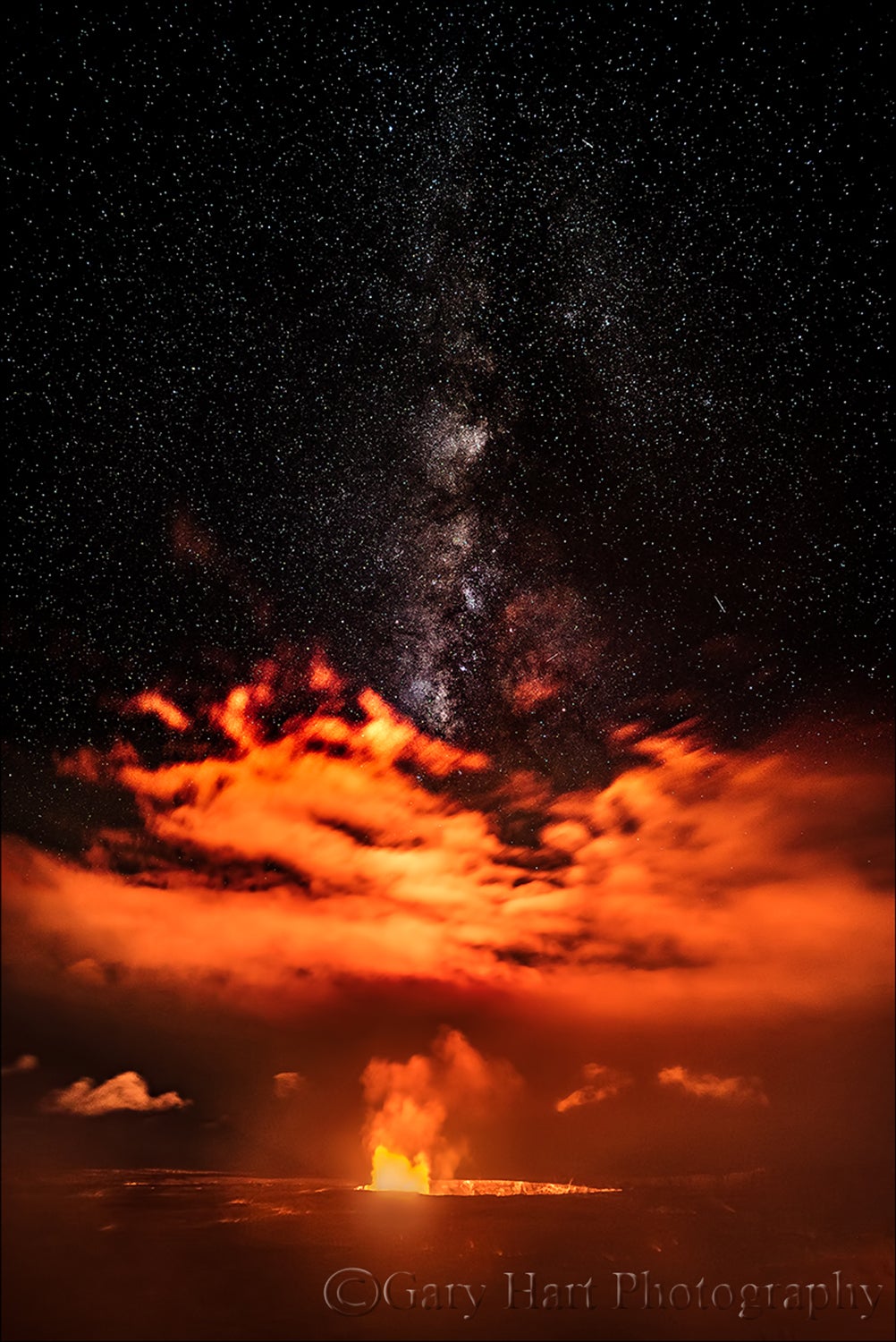 I don’t have the time or temperament to be a pixel-peeper, but I had a sense that this lens was pretty sharp wide open, and few things reveal comatic aberration more than stars. I finally got my chance to test the 16-35mm f/2.8 G Master lens at night on the Hawaii Big Island workshop in September. When this year’s Milky Way images revealed that the 16-35mm f/2.8 G Master is sharp and pretty much aberration free at f/2.8, I couldn’t have been happier.

As with every night shoot, this night at the caldera I tried a variety of exposure settings to maximize my processing options later. I was pretty pleased to get a clean exposure at 10 seconds (minimal star motion) and f/2.8 (maximum light). While the α7S II doesn’t even breathe hard at the ISO 3200 I used for this image, I know if I were shooting someplace without its own light source (for example, at the Grand Canyon, the bristlecone pine forest, or pretty much any other location lacking an active volcano), I’d probably need to be at ISO 6400 or even 12800 to make a 10-second exposure work. But it’s nice to know that the α7S II and 16-35mm f/2.8 G Master will do the job even in darkness that extreme.

A couple of weeks ago while in Sedona for Sony I got the opportunity to use the new α7R III. One highlight of that trip was two night shoots with the new camera. I haven’t had a chance to spend any quality time with those images, but I got the sense that its high ISO performance is nearly as good as the α7S II. If that’s true, that will be one less compromise and a lighter camera bag – at least until Sony releases the α7S III.