The announcement of the new Sony 135mm f/1.8 G Master lens brought in a wave of first reviews that reveled over its sharpness, speed and overall performance. Roger Cicala and Aaron Closz of Lens Rentals, who are well-known for their extremely thorough lens testing procedures, put 10 “new-from-box” 135mm f/1.8 G Masters under their microscopes and found that the lens is every bit as good, if not better, than reported in many initial hands-on reviews.

“But as far as the test goes, the results are pretty simple. This is the sharpest lens we’ve tested. Period. (At last count, that’s out of 300+ lenses tested.)”

“So, this write up is my usual MTF post; 10 new-from-box copies tested and averaged. They are Sony’s own copies, however, not the usual lenses we’ve bought off the shelf. I’ll repeat the test in 6 weeks when we get our own copies, but I have no reason to think it will be different. And just to be clear, Sony didn’t hover over me or approve my results; they’ll see this blog post for the first time exactly when you do.”

When looking at the MTF results, Cicala and Closz point out that in the center it’s the highest MTF they’ve ever seen on a non-supertelephoto lens. 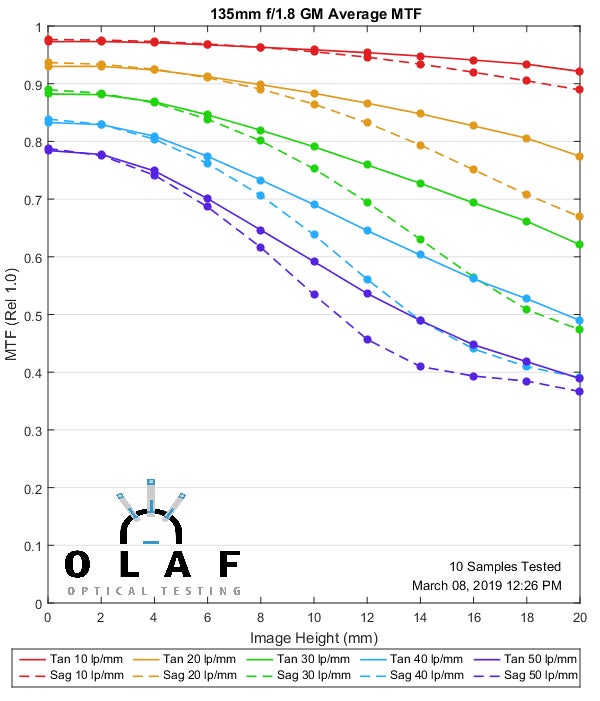 “These results are insanely good. At 100 lp/mm the Sony 135mm f/1.8 GM has a higher MTF than most excellent primes do at 50 lp/mm. If you don’t speak MTF, basically that means this lens can resolve fine details that would be a blur on excellent lenses.”

“But as far as the test goes, the results are pretty simple. This is the sharpest lens we’ve tested. Period. (At last count, that’s out of 300+ lenses tested.)”

See more of their findings at LensRentals.com.