Brian Smith is a Miami-based celebrity portrait photographer who began his career thirty-plus years ago. Starting out as a newspaper photographer, Smith soon won a Pulitzer Prize for his coverage of the 1984 Summer Olympics. So how did he get from there to here? Smith sat down with William Sawalich to talk through his journey.

Alpha Universe: I understand you’re not originally from Miami.

Brian Smith: No, I moved here in 1986. I guess that’s long enough to be considered semi-native status at this point. I was born and raised in the heart of the Midwest, Ames, Iowa, and educated at the University of Missouri.

Alpha Universe: What took you to Miami?

Smith: The beaches were much better than the beaches in Iowa.

Smith: Really, I bounced around in increasingly warm spots over the years. Right out of college the first job I took was with the New Orleans Times Picayune, and I spent a brief time there before I took a job with the Orange County Register. I spent four years working for them, which is where I won the Pulitzer. Then I was kind of at a crossroads, whether I was going to leave and freelance or give a few more years of newspapers a chance.

And then the Miami Herald came calling with the opportunity to shoot whatever foreign assignment in their sphere of coverage interested me. And I was pretty fascinated with Haiti, so I jumped at the opportunity figuring I’d spend a year or two there and then move on from Miami to someplace more civilized. And then I decided that civilization was overrated. I really love Miami. I don’t think I could have arrived at a better time. 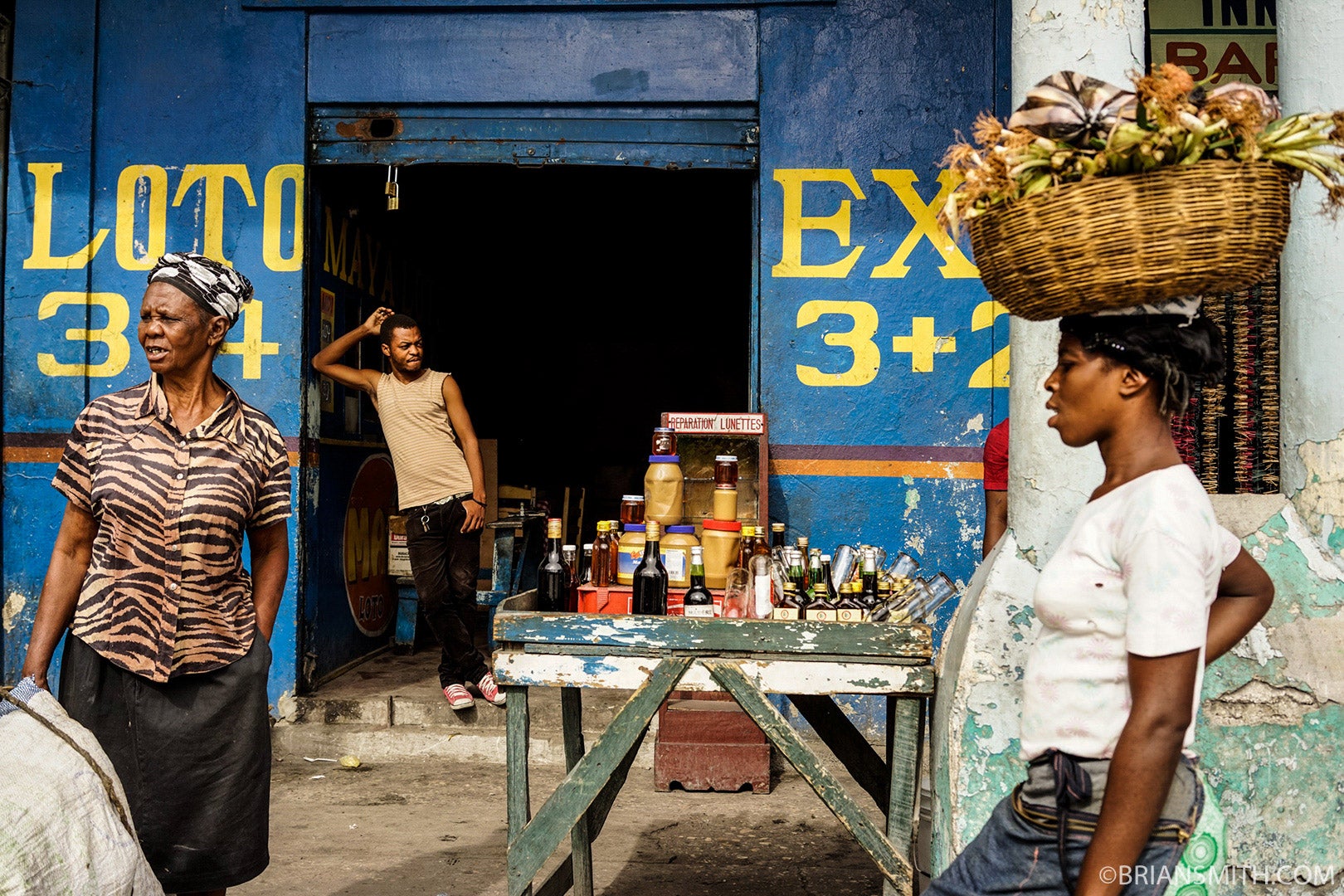 Alpha Universe: Was it your plan all along to eventually leave photojournalism for commercial photography?

Smith: It definitely was not the plan. If anything, when I was in college I would have seen National Geographic as my dream job. But one of the great things about newspapers is you work your ass off. And by great I mean you typically cover anywhere from two to four shoots per day, and really get thrown into a huge range of assignments. So everyday it’s something different. One day I could be covering the Lakers championship and the next day it could be something at a local high school to a portrait to a product shot. And I can’t think of a better training ground.

A lot of people come in via the assisting route, and they’re watching somebody else do work, but they’re watching them do work at a normal pace. But because of the accelerated speed of newspaper photography, the number of things that get thrown on your plate, you have to react and come through quickly. And you also have a wide range of shoots. I was pretty well known at that time for doing sports photography, and it was incredible to be on the sidelines for a Superbowl or courtside at the NBA finals or covering the World Series. But what I found was, as much as I enjoyed shooting action, it was not the times I was shooting an athlete with a 600mm lens from the end zone that I really loved, it was the times when I got an hour or two to do a portrait of somebody behind the scenes. I liked that because we could actually interact. We talked, and I got to know something about them, and got the ability to capture something about them people may not know. That was the start of my transition to portrait photography.

Alpha Universe: Once you realized this was something you wanted to pursue, how did the transition actually happen from newspapers to editorial assignments?

Smith: I try to explain to people that winning a Pulitzer is not a life-changing event, it just opens a few doors. It sounds good, it looks good on the resume, but it doesn’t really change your life. But it will open a few doors—probably a lot like having a famous relative. I was at the point where I was really wanting to get in and see editors at magazines and I got in to see a lot of magazines, everybody from Time to Fortune to Sports Illustrated and Forbes. A lot of the magazines I started working for were because of that. Nobody hired me because of a Pulitzer, but they would see me. That really got things started. After a year of that I could have decided to leave newspapers at that point and just set out to freelance, but I just felt there were maybe a few things I hadn’t explored and the opportunity from the Miami Herald just seemed too good to pass up. So I made one more stop in newspapers and I’m glad that I did. 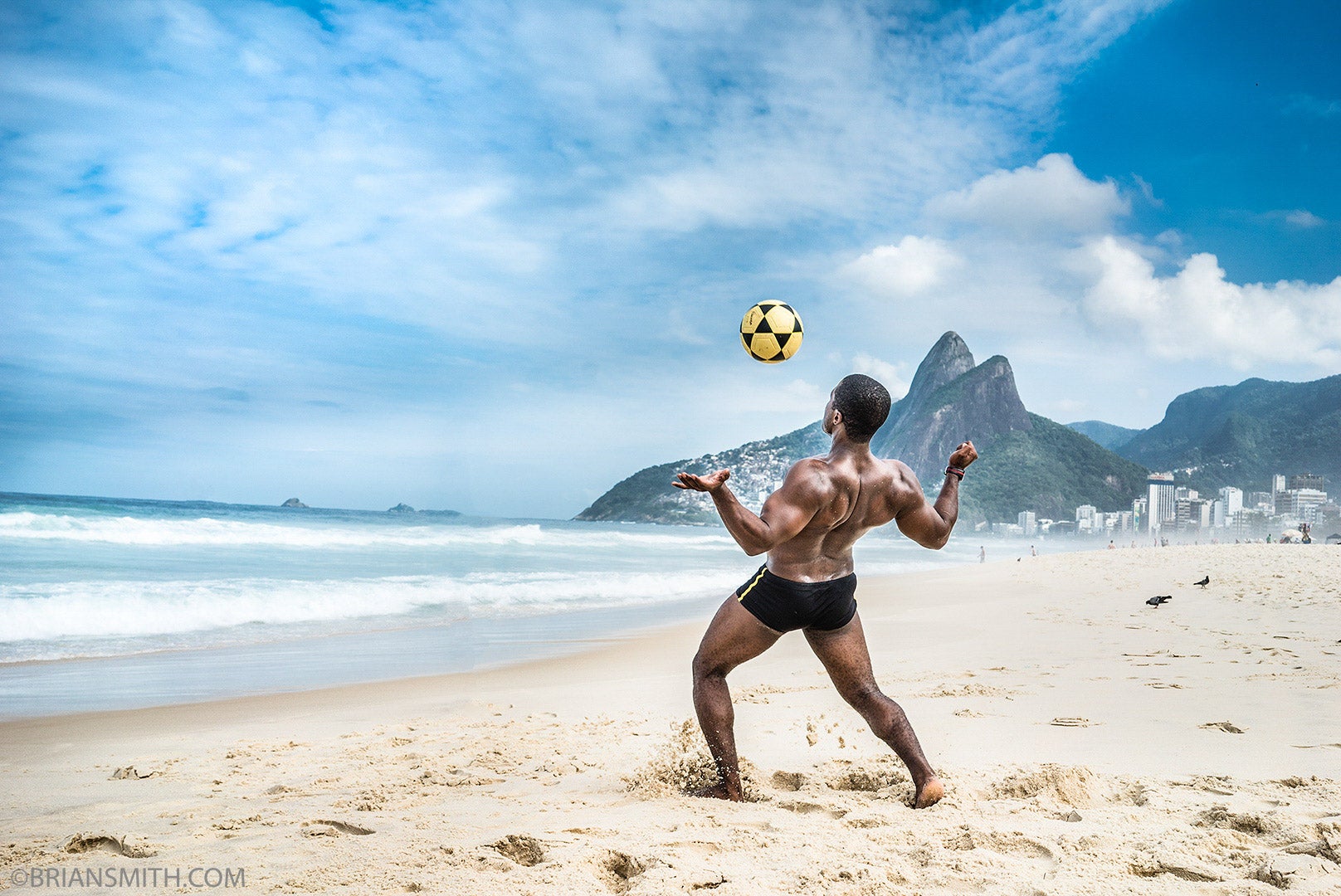 Alpha Universe: Because of your sports background, was your start as a freelancer shooting athlete portraits?

Smith: No, it was really lots of business portraits. I think one of the things that I got known for was being able to go into an ugly, hideous factory and make it look somewhat presentable. But at the same point, you also don’t want to spend your entire career taking situations that are 2’s and making them 6’s. It was great in terms of opening doors, but it wasn’t exactly what I wanted to do. Relocating and taking some time off really let me step back from it and build a portfolio that was more celebrity oriented and showed more of the type of work I wanted to do. And I think that’s the lesson: you’re not going to get hired for the work you want to do, you’re going to get hired for the work you show.

Alpha Universe: We frequently interview traveling photographers who switch to compact mirrorless cameras because of the size and weight savings. But as a portrait photographer, what’s the appeal of ditching the DSLR? 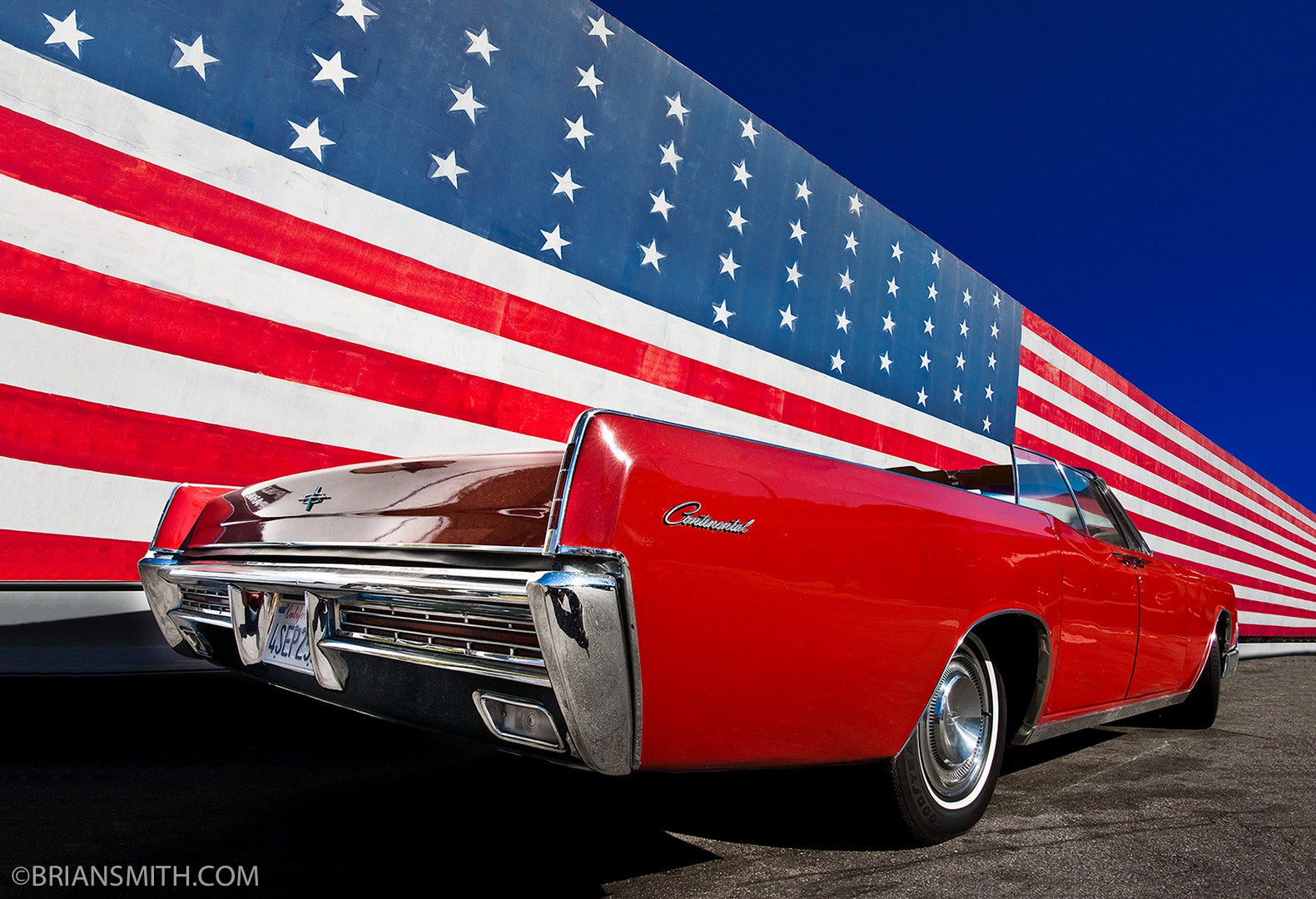 Smith: At the end of the day, the weight is much less crucial for me. A lot of times when I’m traveling, my camera gear is the lightest stuff I’ve got. I’ve got four cases of lighting gear that are all 50-plus pounds. I’m carrying all that gear, so in the scheme of things the weight that I’m saving is maybe 1%? That’s really nothing. So I’m not looking at it in that way.

The reason I choose to shoot mirrorless is the technology. If I can shoot whatever size camera that has the most dynamic range and a 42-megapixel sensor and produces beautiful color, the form factor doesn’t really matter to me. Whether it’s a bigger DSLR or a mirrorless camera. I just want that end result.

Having said that, at the end of the day, after intensive shooting all day long, even though I’m not climbing mountains or with a pack on my shoulders, I would feel like I’d gone at least 10 rounds with Mike Tyson. If I can lighten the camera that I hold in my hands and get better quality in the process, it’s really a win-win. I do 99% of my shoots handheld. That goes back to medium format days. Even huge cameras, I would almost always hand hold them. Just to be able to move.

Alpha Universe: I wonder if that is the journalist in you…

Smith: I don’t know where it comes from. I’m moving in and out a lot, which I really would not be able to do if I was locked down on a tripod. That’s not to say I would never shoot on a tripod. That’s the 1% where really locking down the scene and directing it is perfect. I tend to go handheld, so even saving half the weight of the body… hey, that’s half the weight of the body. I also remember when I was a young photographer, looking at the 50- and 60-year-old photographers on the staffs I worked with, half of them, their body leaned to one side or the other, or they were constantly going in with back or neck issues. You sort of cringed when they left with one body and one lens to go on assignment. How can you do that? After a number of years you realize, how can they not do that at that point? It should be about capturing the image instead of how much we can beat up our bodies. Lighter is certainly a plus, no matter what situation you’re working with. 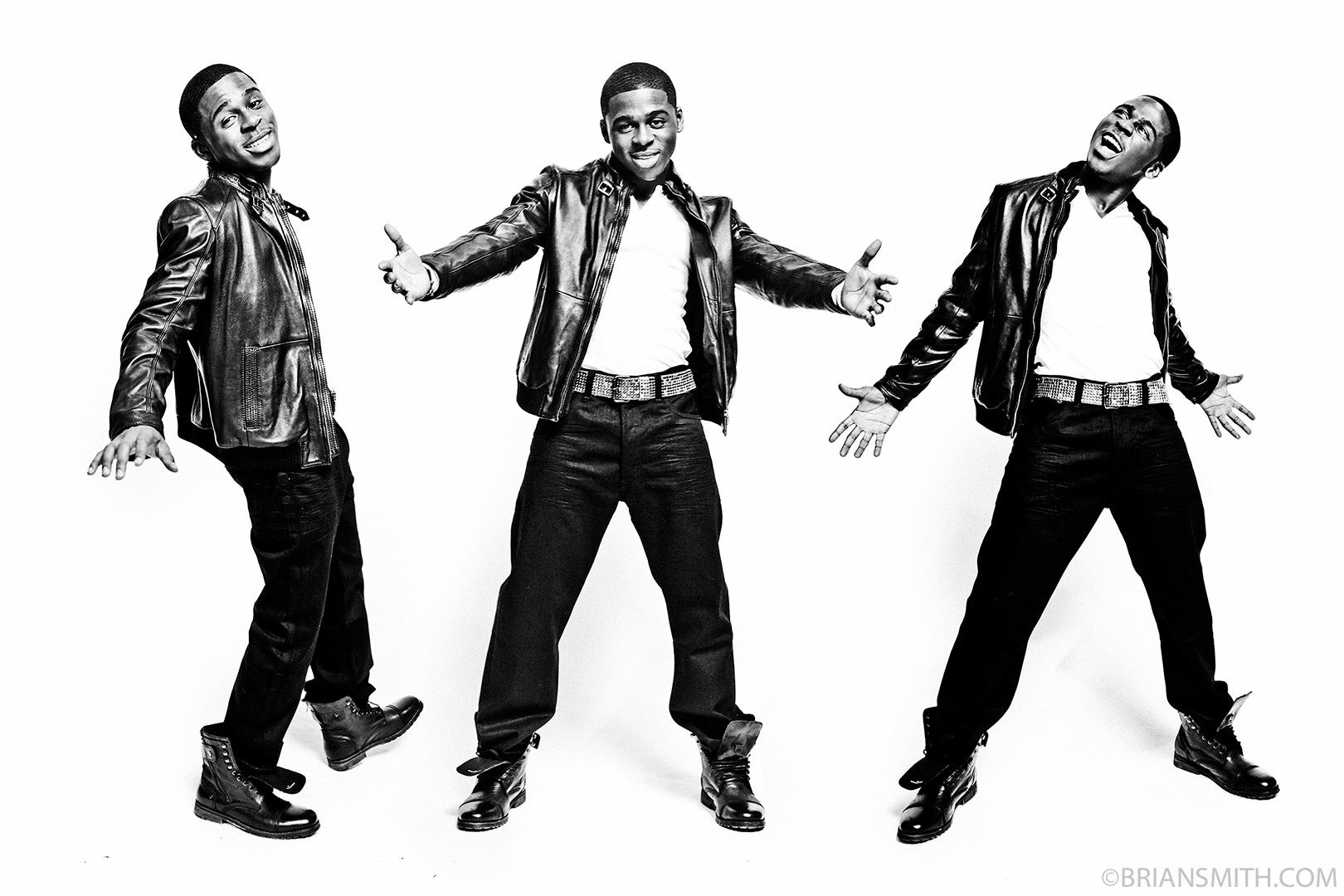 Alpha Universe: On your website you offer career advice for other photographers. I get the impression that mentoring is important to you, and that part of the appeal of the Sony Artisans program is that you’re afforded more opportunity to do that.

Smith: Absolutely. I think that’s probably the best part of the program. There’s obviously the gear component, but there’s also the sharing of a lot of practical advice that’s not necessarily tied just to the gear you’re holding in your hands. It’s how you use it, and how you interact with people. To me, that’s the most important part of portrait photography.

Alpha Universe: And the part that gets talked about least, right?

Smith: Yes. The second book I did, Secrets of Great Portrait Photography, the title is kind of a joke about that. Someone suggested it would be great if somebody just told the secrets instead of holding back. That’s exactly what I benefitted from when I was sitting in an audience. It didn’t help me for somebody to come out and say ‘here are my pictures, aren’t they fabulous?’ I wanted to hear what they don’t talk about, what are the keys to it. That’s a lot of what we try to do in the program. Here’s how I got from point A to point B. Whether it’s great or not, here’s how I was able to capture it.

Alpha Universe: At this point in your career, how do you gauge your performance and ensure you’re continuing to move in the right direction?

Smith: I think there are a lot of ways to do it. Really, the best way to look at a career is not how quickly you can run up the mountain, but the steady progress. There are ups and downs along the way and I think you take a long-term approach. It’s not a sprint; a career is really a marathon to get where you want to go. And you should enjoy yourself along the way. I think that gets lost a lot. Where people are racing to what they think is a mountaintop, and then they realize they’re at base camp and the mountain is looming above them. I encourage people to savor every step along the way. I think if you ever feel like you’ve reached the very pinnacle, you probably have nowhere to go.

So I think you always look at it as a journey and you’re going to keep going and going. And you can enjoy each shoot for what it is. If you’re enjoying what you’re doing along the way, I can’t think of a better experience.