The Sony Airpeak S1 is the world’s smallest drone that can be equipped with a Sony Alpha mirrorless camera, opening up an entirely new world of creative possibilities for what you can capture. Director and cinematographer Alexander Alexandrov and aerial cinematographer Grant Boutiette took the Airpeak S1 with the Sony Alpha 1 up north to the Sierras to test out the drone’s limits in high altitude, cold temperatures and low-light environments. “Having Sony’s flagship Alpha 1 camera in the air is huge,” says Alexandrov. We connected with Alexandrov for more of his thoughts after using the Alpha 1 with the Airpeak S1 to capture cinematic footage in challenging conditions.

Director/cinematographer Alexander Alexandrov shares his thoughts after pushing the Airpeak S1 & Alpha 1 to their limits in the Sierras.

Before the Airpeak S1, Alexandrov explains that there were a lot of limitations for aerial cinematography. “There were really two different ways to go about it,” he says. “You could get a really high end drone and put a cinema camera up there, but that usually involved a whole team coming in separately. It takes a lot of planning because you would need a dedicated camera for this because you couldn’t just take it on and off. Budgets are always being crunched and bringing in this whole crew and worrying about all of the other things you have to capture without the drone. Even if you have the budget, many times the results just wouldn’t end up that great because it’s too many people and too much planning.”

He continues, “And the other solution would be to use a smaller drone so you don’t need the entire crew. The problem with these smaller drones is that the lenses you could use with the camera were slow and the sensors on the cameras weren’t strong in low light. You would have a lot of limitations in image quality which isn’t ideal.”

The size of the Airpeak S1 and its ability to hold a Sony Alpha mirrorless camera changed the game for cinematographers, and Alexandrov says it has really filled the gap. “The image quality of the Sony Alpha mirrorless cameras has always been phenomenal to me. You have the amazing sensor that’s super sensitive to low light and the amazing autofocus technology. You have the incredible set of G Master lenses that are super fast. Having the capability to put Alpha in the air fulfilled this big gap while still being in a small package. You can get better quality and still have a small footprint. It’s easy to take the footage from these cameras and intercut it with high-end systems like the Sony Venice.”

Another standout feature for Alexandrov while using the Sony Airpeak S1 with Sony Alpha is the flexibility of the Sony E-mount system. “It's really amazing because a lot of the time lens choice is very important for projects,” he explains. “The personality gives you the style, the life of an image, and sometimes it even supersedes the sensor choice. So to be able to really select any lens and adapt it to the camera is phenomenal to me.” 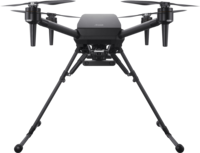