This shot started at the summit of Angel's Landing at Zion National Park. As I drank in the amazing view I realized I had about six hours before my flight back home. I scampered down the trail, satisfied with the incredible shots from my Sony Alpha gear, and started driving back to Las Vegas to catch my flight. August, as many will know, is monsoon season in the southwest United States. Everything will be calm and quiet one second, and the next second you're in a crazy storm. I kept this in mind, since I was driving West.

Join Alpha Universe, create your own public profile and upload your Sony photos to the community gallery. It’s free and you’ll have a chance to be featured on Alpha Universe! Learn more at alphauniverse.com/profile

The sky began taking on the golden colors of sunset, exploding with soft yellows and pastel pinks and blues. I found a spot to pull over, hopped a guardrail, and scampered up a hill with my Sony gear. Normally I would've scouted out this location, used maps online to scout it in advance, and put myself in the perfect spot. I didn't have that this time. The sun was setting perfectly behind the shoulder of an elevated plateau. I didn't have time to find a composition or take any test shots. The scene presented itself, I was in the right place at the right time, and my car was only partially blocking the road. It was up to me and my Sony Alpha gear. 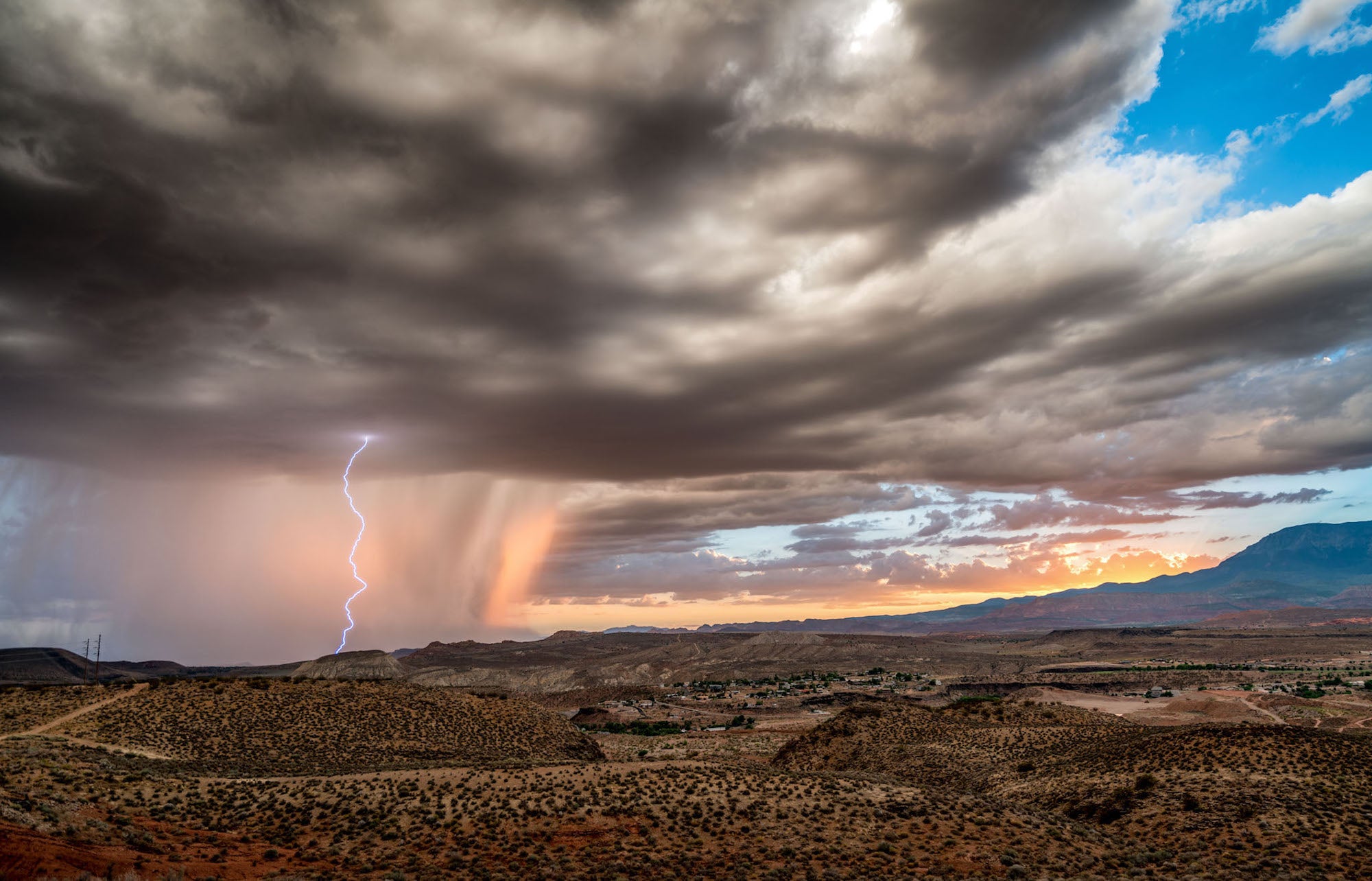 My tripod was already packed away, all I had with me on the hilltop were my Sony α7R II and my Sony 16-35mm f/4 lens. This wouldn't be a problem though, due to the in-body stabilization of the α7R II (and the Optical SteadyShot in the lens). I zoomed in on the sunset behind the plateau, grabbing some wonderful frames. Suddenly, I felt a drop of rain, looked up, and saw the massive stormcloud on the left of the frame. I immediately zoomed out to capture the sunset and the clouds and saw quick bursts of lightning on the front edge of the storm.

Trusting the weather-resistance of the camera and the lens, I ignored the rain and kept firing, hoping to capture a bolt of lightning as the exclamation point on this beautiful scene. After only five attempts I got it: the remnants of an epic sunset on the right and a sudden monsoon storm on the left, complete with a lightning strike! The drops of rain escalated into a full-blown monsoon storm as I ran back down the hill and tossed my camera and myself into my car. I dried everything off, saw that the shot was a once-in-a-lifetimer, and drove home. Even completely wide open the lens captured the image beautifully and the final image was sharp from edge-to-edge.

Visit Andy’s profile to see more of his work and what’s included in his Sony system.

Join Alpha Universe, create your own public profile and upload your Sony photos to the community gallery. It’s free and you’ll have a chance to be featured on Alpha Universe! Click here to learn more.