Photographer Stan Moniz of the Alpha Collective likes to challenge himself to capture unique shots of the Milky Way composited with various landscape locations. Last year he captured Southern California’s bioluminescent waves with the Milky Way, and recently he took the new ultra-wide Sony 14mm f/1.8 G Master lens into Capitol Reef National Park in Utah to shoot this Milky Way and long exposure car light trail. We connected with him to learn more about how he created the composite and how the 14mm f/1.8 G Master helped him get the shots he needed to do so. 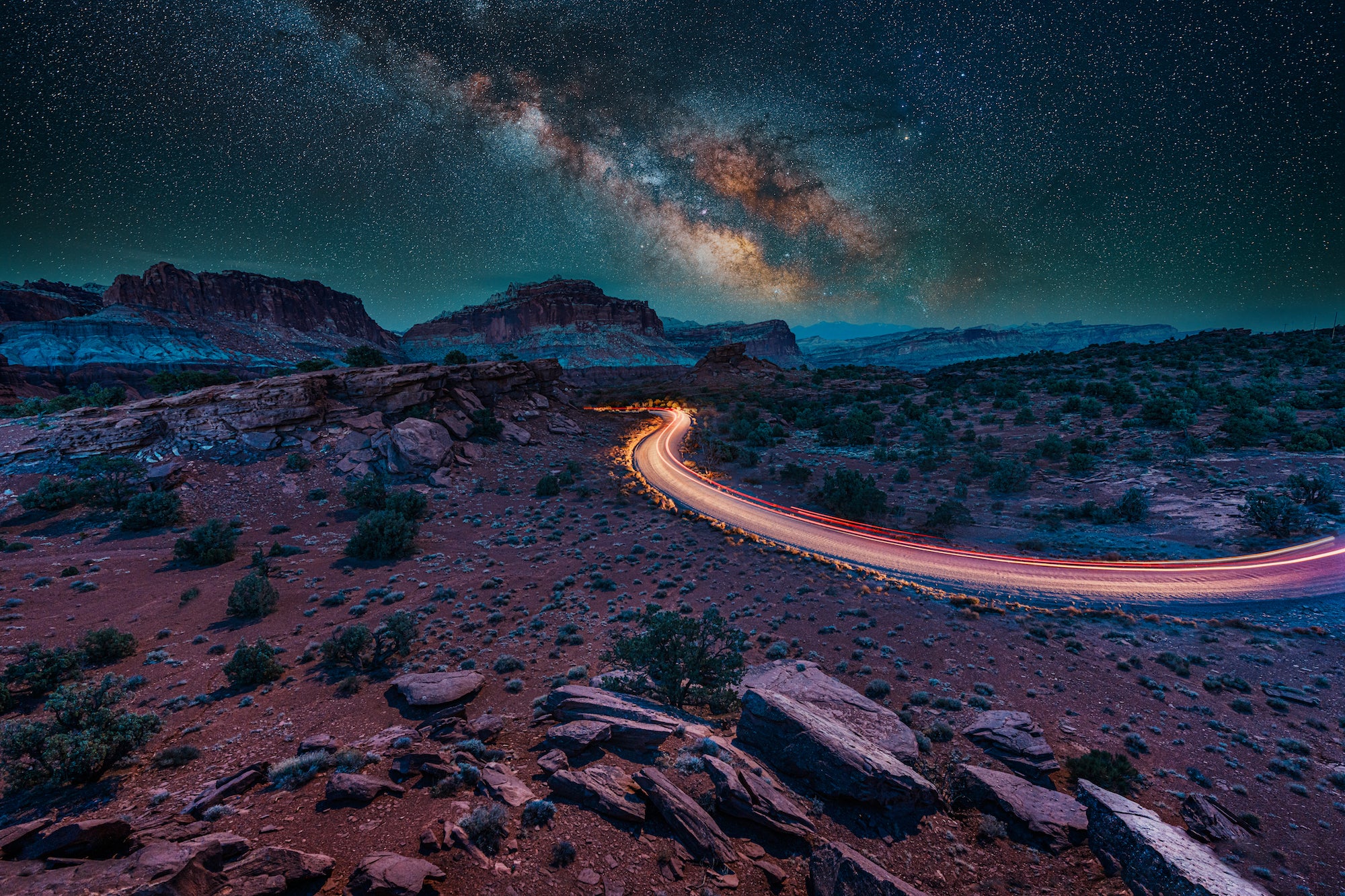 Moniz was in the Capitol Reef National Park area photographing the Milky Way, and on his last day there he came over a ridge that revealed this road. “I couldn’t believe this was right next to me the entire time,” he says. “It was the most epic shot with the road and the Milky Way rising – all that good stuff. I saw it and realized I had seen shots from this place. When I was trailing back I looked on Instagram and realized it was a known spot but hadn’t been shot too often, and I found nothing from that spot with a car trail. So I came back again with the Sony 14mm f/1.8 G Master and went straight to that site.”

Photographer Stan Moniz of the Alpha Collective shares the story behind this Milky Way and light trail composite he took with the Sony Alpha 1 and Sony 14mm f/1.8 G Master lens.

He had convinced a friend to go with him to the site around 3 a.m. He wanted to capture the car trail portion of the photo first, and so his friend would drive the car while he snapped the shot. “My friend and I had these walkie-talkies to communicate,” says Moniz. “I had him back out of the frame and then when I said go, he started driving. I would tell him to slow down or speed up to get the car trail how I wanted it. It makes such a drastic difference, having that S-turn with the car in the photo.”

“You’ll notice the landscape is lit up in the photo – it’s really blue,” he explains. “That’s natural moonlight. It was about four days from being a full moon, so it dropped right as the Milky Way was rising. I planned it to where I shot the car trail two hours before the moon dropped. It was perfect because I was able to shoot at a lower ISO and still get a lot of detail in the landscape.”

Once he got the shot of the car trail, the moon set and it went really dark. That’s when he proceeded to photograph the Milky Way. “Pretty quickly the Milky Way was in that same spot above where I shot the car trail, so I photographed it and captured 15 images. I stacked the images in a program called Starry Landscape Stacker to reduce any noise and then I did some work in Lightroom and Photoshop.”

The Sony 14mm f/1.8 G Master allowed Moniz to go wider than previous lenses while still crisply capturing the entirety of a scene. “In a situation like this, before the 14mm I would’ve probably had the 24mm f/1.4 G Master on my camera and wished I could go just a little bit wider,” says Moniz. “Before the 14mm was produced you were stuck with the 24mm or you had to do a pano. The 24mm is still just as good when it comes to astro and sometimes you want that extra reach, but now with the 14mm f/1.8 G Master combined with the Alpha 1 at 50 megapixels, I can get an entire scene like this all in one shot.”

“What’s really cool about the 14mm f/1.8 G Master is that there is literally no distortion, even wide open at f/1.8. I’m so critical about the sides, so to come back home with confidence in shots that were taken wide open at f/1.8 is really crazy. Typically I never shoot any really fast lens wide open, I usually stop it down just a little bit to tighten up the corners. But with the 14mm I have the confidence going in that I will be able to get awesome shots that allow me for quicker shutter times and lower ISOs – making way more pinpoint stars in my photos.”

“It's just an all-around perfect lens. It's my favorite lens right now.”