Zach Doehler (@calibreus) is a landscape and nature photographer from the beautiful west coast of British Columbia, Canada. He’s been doing photography for over five years, professionally for nearly two. His love for photography pushed him outside to enjoy nature, and he wanted to create landscape photography that stood out from others. After hundreds of hours working in Lightroom and Photoshop, Doehler began to develop a style with dreamy light and punchy colors. With more than 163k followers on Instagram, it's fair to say that Zach has it pretty well dialed in. We connected with him to get the story behind this colorful landscape. See his story behind the shot below and create your own Alpha Universe Profile HERE for your chance to be featured on AlphaUniverse.com.

With more than 163k IG followers, Zach Doehler (@calibreus) is doing it right. He takes us through his techniques from capture to image processing. 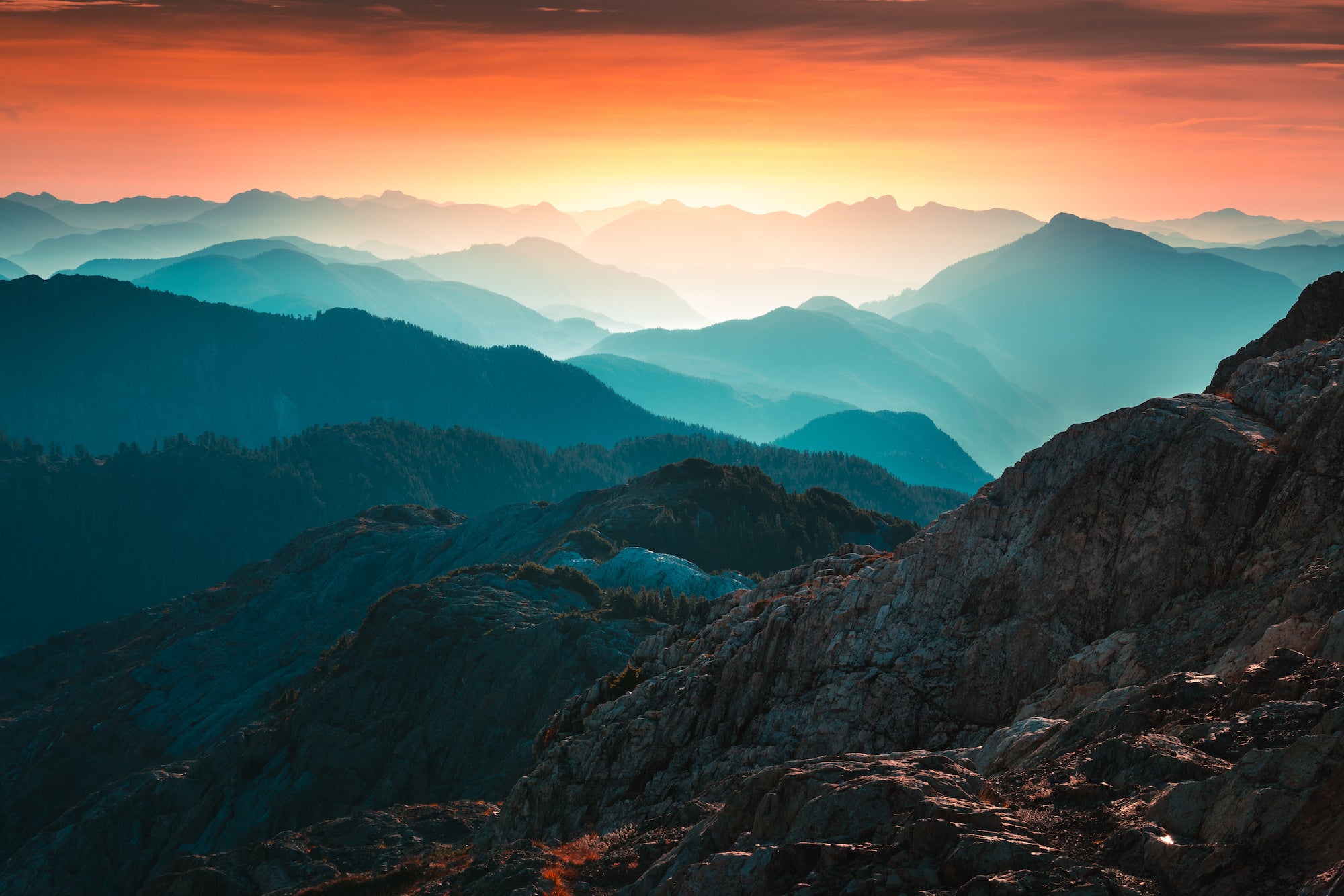 This was captured during a solo overnight hike up in the central mountains of Vancouver Island. After a very restless night of sleep up there all alone, morning finally arrived, and I woke up early to shoot sunrise. It was gorgeous. I watched as the alpenglow lit up the mountains around me in a beautiful pink color. And after breakfast, I went back to the peak once more to enjoy the views around me in that golden morning light. That was when I captured this image. A beautiful scene of what appeared to be a landscape of endless mountain layers. It was stunning. I shot hundreds of images that morning, but this was by far my favorite photo I captured. It was during that moment that I knew, this would not be my last solo hike.

I captured this with my Sony α7R II and the Sony 70-200mm f/4 G. I love the α7R II because it offers an incredible amount of power for the money and gives me plenty of resolution to work with in the field. The 70-200mm was perfect for this scene because I wanted a decent focal length to be able to compress this scene and emphasize those layers even more. I made sure to shoot this image in RAW so that I could harness the full power of the sensor and get the best result possible in post. I also made sure to have stabilization on so that I could get a tack sharp image handheld.

I captured this photo handheld at ISO 100, 97mm, f/11, 1/160-sec. That relatively fast shutter speed combined with optical and in-body stabilization ensured that the end result was tack sharp. As I mentioned earlier, this photo was taken a couple of hours after sunrise. So the sky was quite bright at this point. I underexposed the shot by about 1 stop, this way I could have a little less information in my shadows while preserving the highlights so that they weren’t blown out.

For the composition, I framed up the foreground and the layers to take up about 2/3rds of the photo. The sky wasn’t all that interesting so I wanted to minimize how much room it took up in the photo so that it wouldn’t detract from the landscape.

I went over this exact image for one of the lessons in my Colorscapes Masterclass; a course that I made to help people to create colorful photographs. I’ll include a few screenshots and break down exactly how I edited it within that recording session.

The RAW file was fairly cold and bright. There were many different directions I could have taken this edit, but I decided that I wanted to go for a more colorful and warm approach. 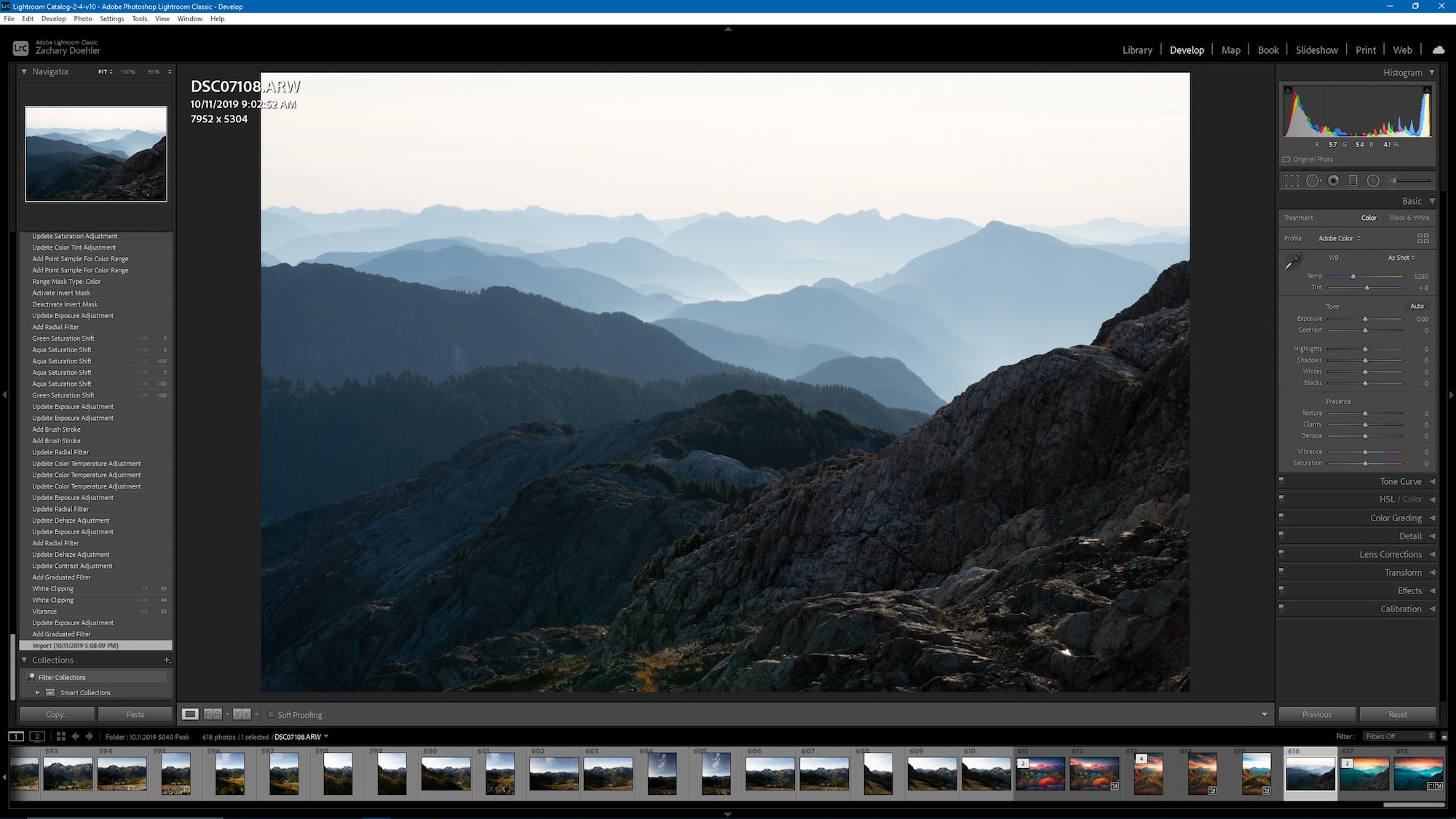 I started off with basic contrast and color adjustments, working through a few different panels in Lightroom and applying different techniques from my usual workflow. Then I did some darkening around the edges with the adjustment brush and darkened the sky using a graduated filter. This allowed me to add more depth and mood to the overall image and bring the viewer’s attention to the center. Finally, I emphasized that center point even more by using a radial filter to add some haze and exposure to my light source. 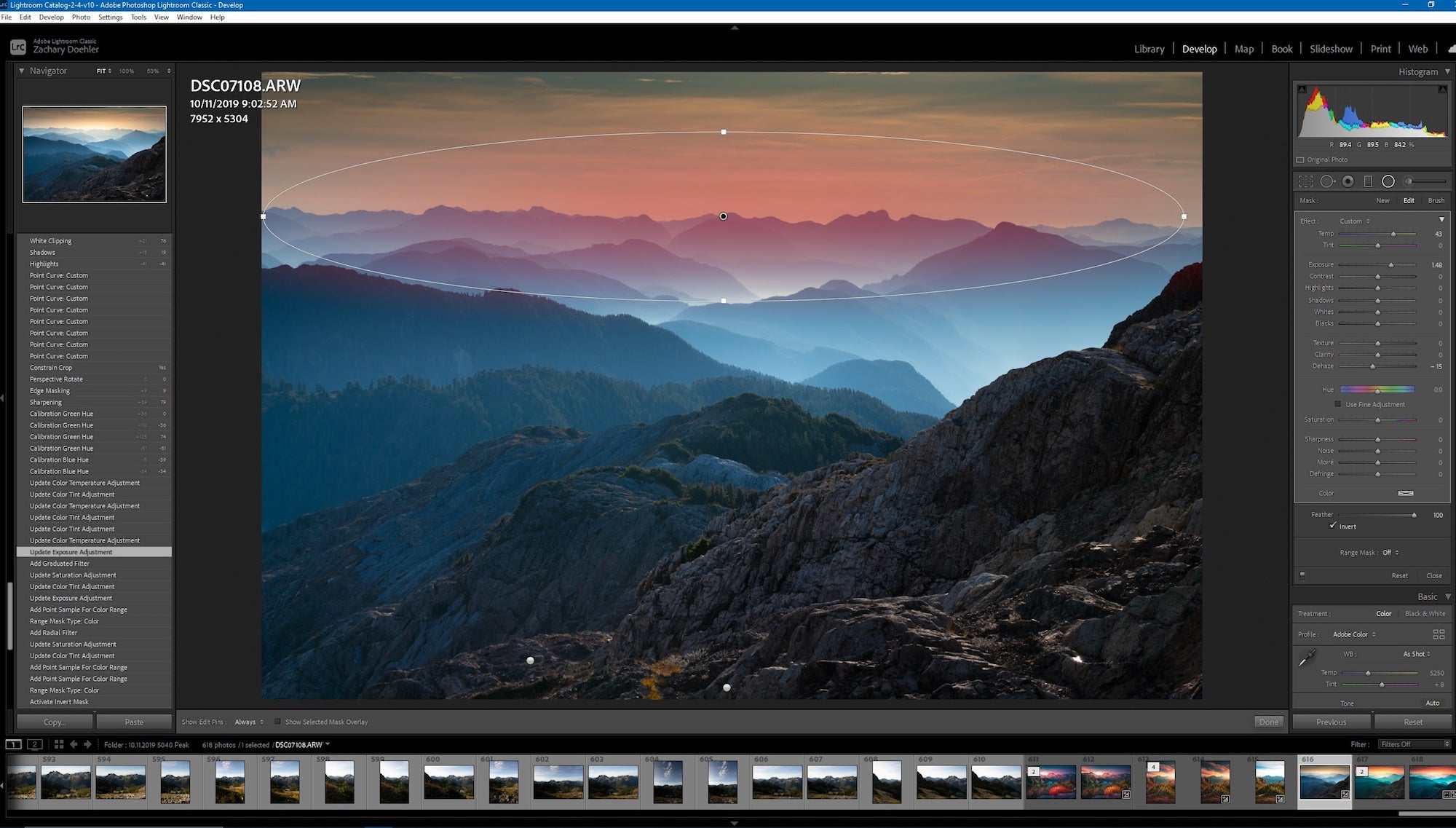 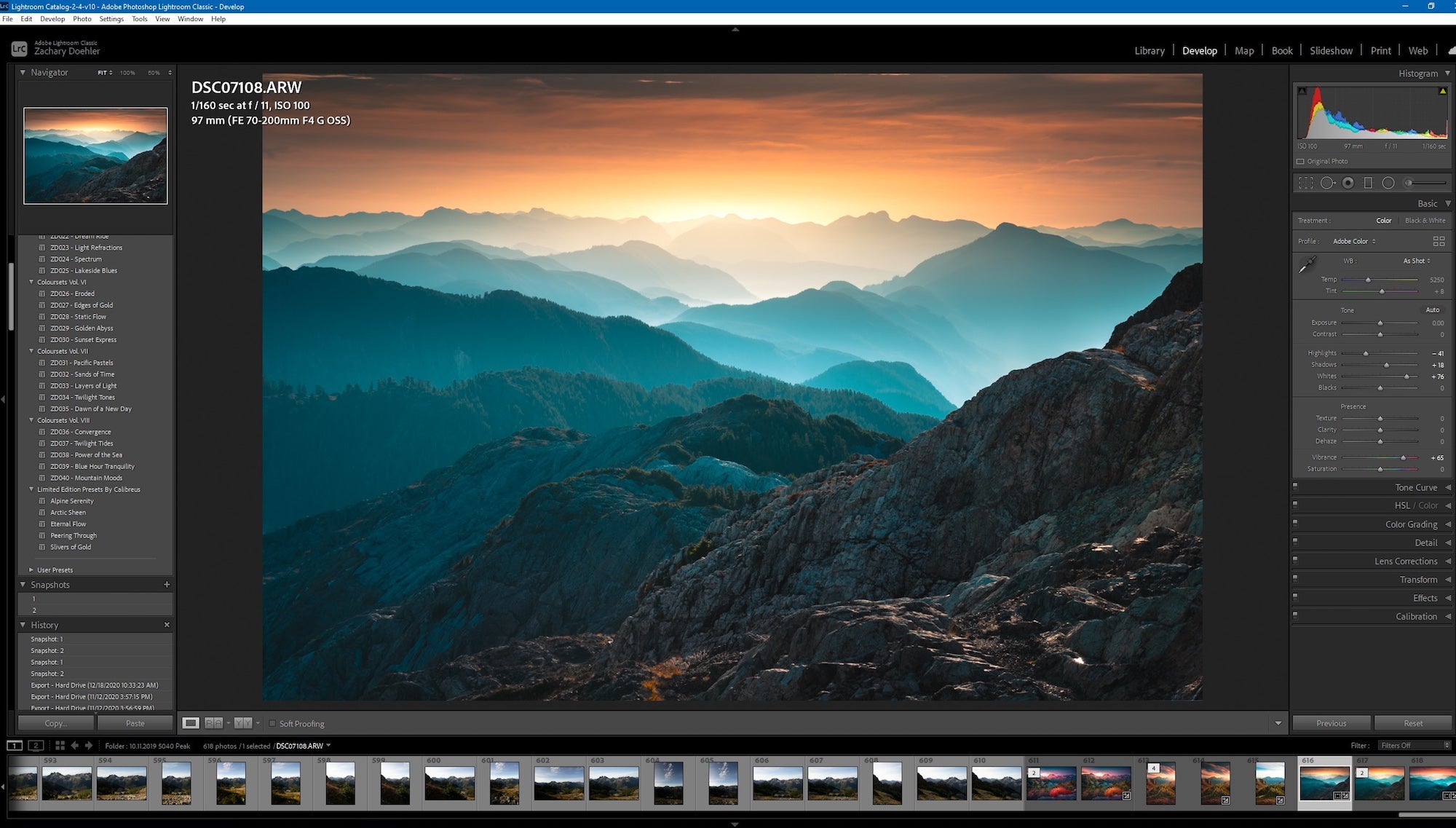 Once I was finished with all of my adjustments within Lightroom, I then brought the image over into Photoshop. I did some final color grading over there and added an Orton effect to make the image a little more dreamy and help all of the colors to blend together a bit more. This was the final result. 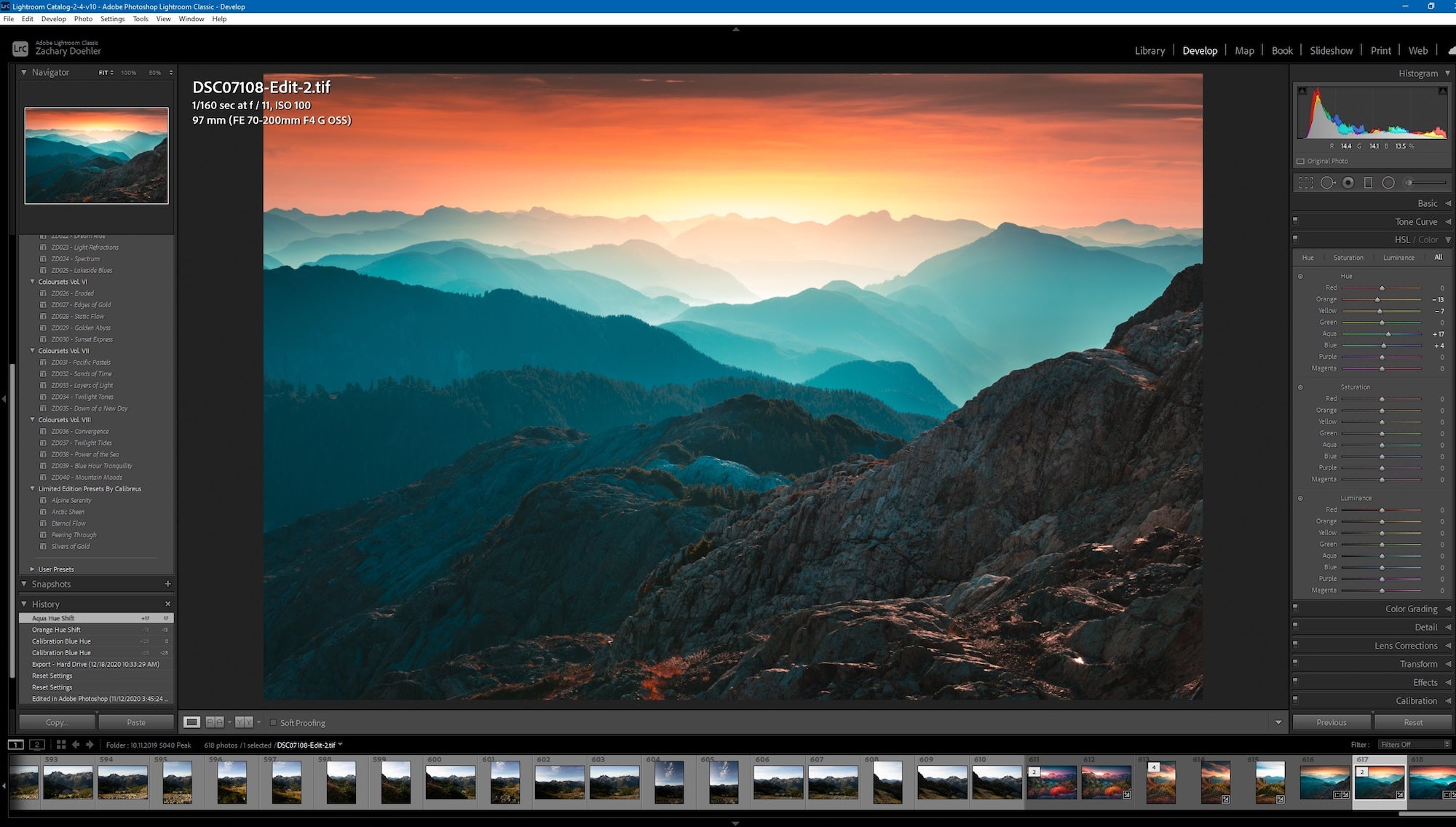 Behind The Shot: Camera Setup To Capture The Vibrance Of The Milky Way

Behind The Shot: Camera Setup To Capture The Vibrance Of The Milky Way