I’m Andy Luten (@realandyluten) and I travel the world for fun and for work. I'm used to the scenery in front of my lens changing, from imposing cityscapes in Asia to amazing landscapes in Norway and Patagonia. Then the pandemic happened. My passport remains unused and the pace of my life has changed, like many of us. As a photographer, I've tried to take advantage of these unique circumstances and get to know the world around me a little better. Now, it may seem a bit ridiculous for someone living in the heart of Dallas, Texas, to want to try astrophotography close to them, but I had an advantage: an incredible building I knew about and the incredible Sony 24mm f/1.4 G Master lens. 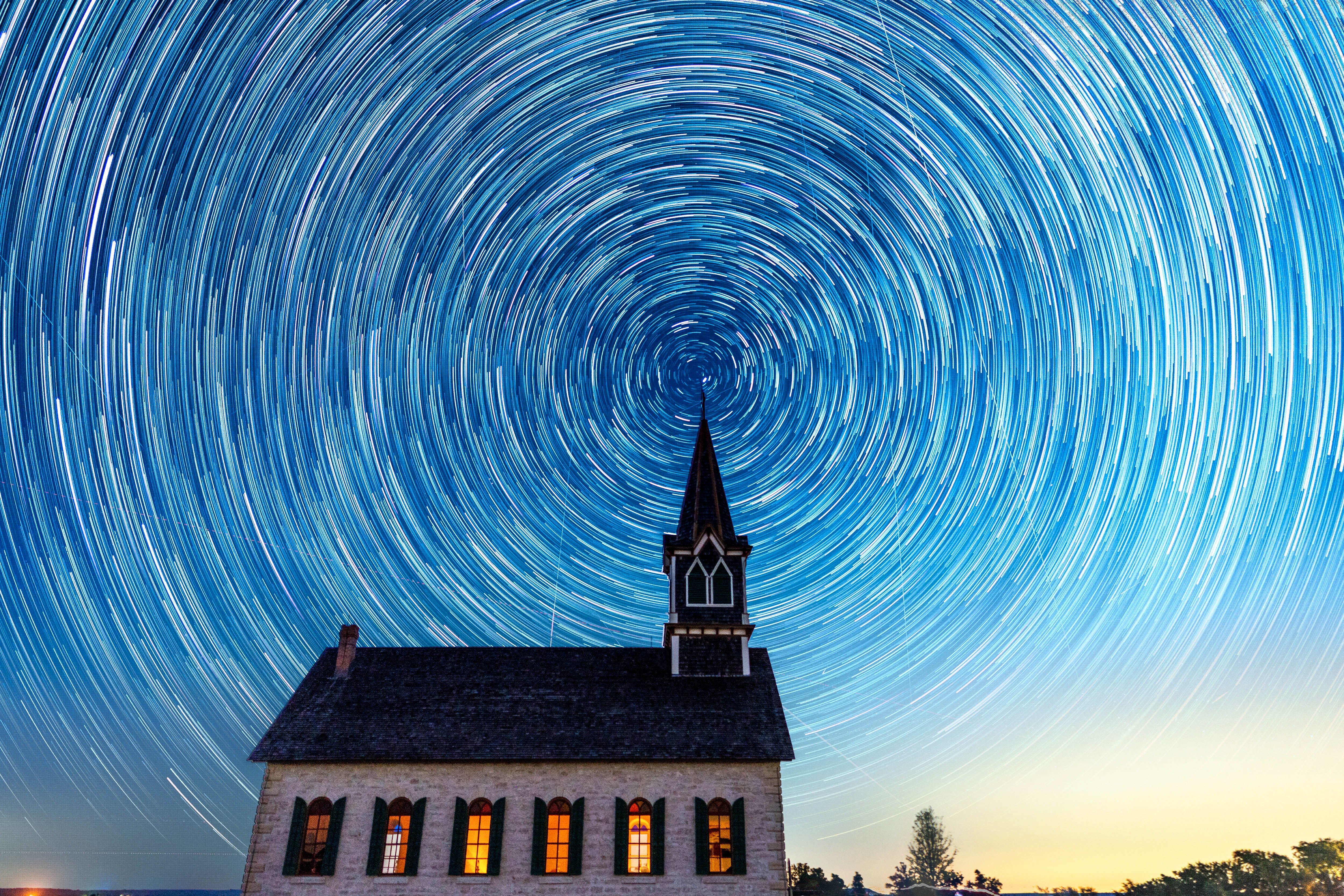 The building was a historic church built in Central Texas by Norwegian settlers in the late 1800s. I received permission to photograph there and made my way about 100 miles southwest of Dallas to a farm-to-market road between the small towns of Cranfills Gap and Clifton, Texas. There stood St. Olaf's Kirke, more commonly known as The Rock Church. It has been restored to its original condition and has neither electricity nor running water, making it absolutely perfect for astrophotography. My fellow Sony shooter Teja Pamganamamula and I met at the church just after the sun had set and began searching for our compositions.

I wanted a shot facing south, to capture the Milky Way over the church, so I arranged my other setup – the Sony α9 II with the Sony 12-24mm f/4 G lens – to capture that. I then decided to walk to the other side of the church to attempt a star trails shot. Using the Big Dipper to find Polaris (the North Star), around which the rest of the stars would rotate, I realized that I could line the North Star directly onto the steeple! 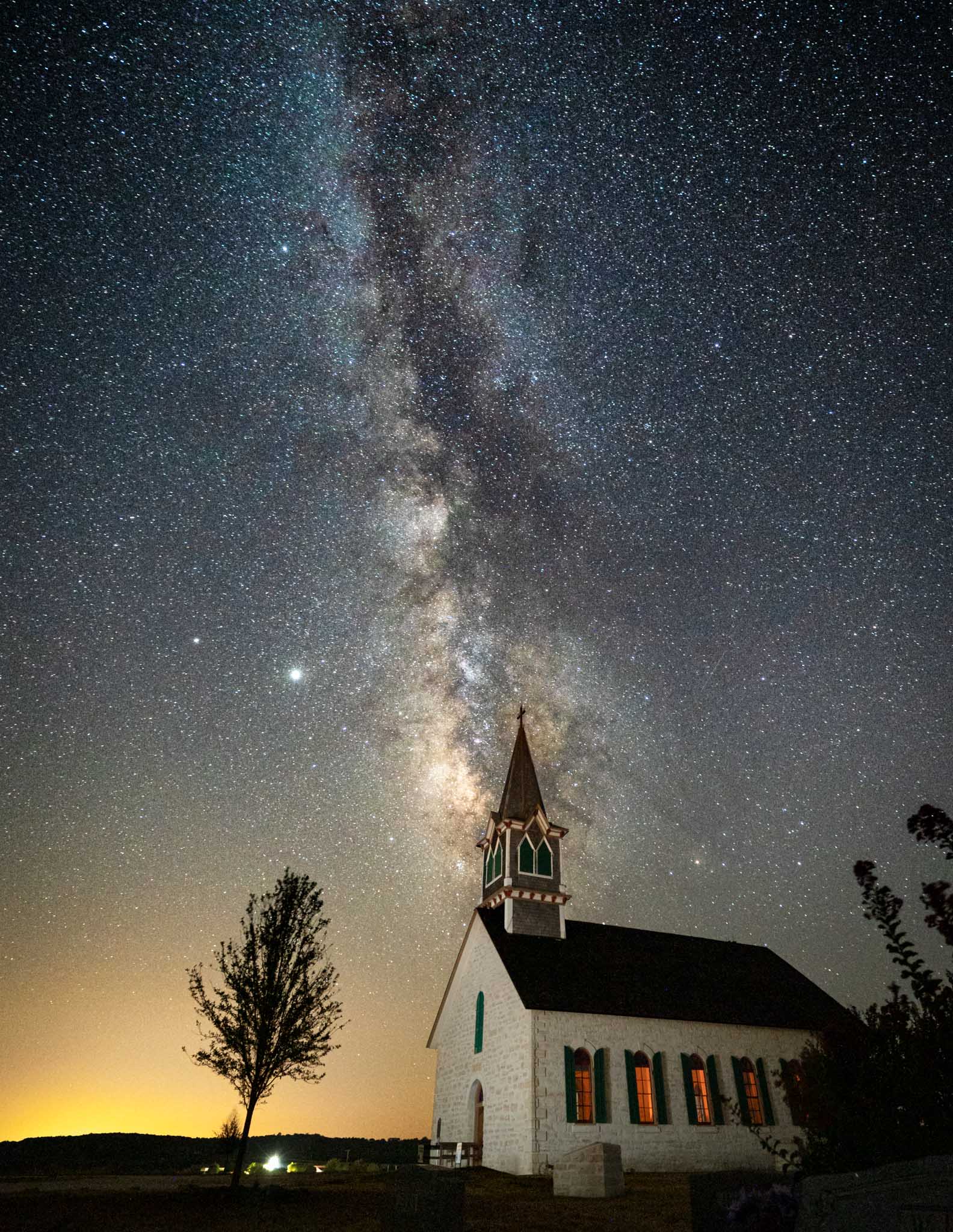 Instead of the α9 II, for the star trails I set up my Sony α7R IV camera and my 24mm f/1.4 G Master lens. I placed them onto my tripod and positioned the North Star directly over the church steeple. I set the camera to f/1.4 with a shutter speed of 10 seconds. At this point, the sky wasn't dark enough, so I used the built-in intervalometer in the α7R IV to delay the start of the shooting sequence for 30 minutes. I checked the focus one last time (using Focus Peaking in the α7R IV to make sure the stars were crystal clear), and set the intervalometer in motion. The camera ran the sequence on its own and fired off 400 shots, only using a third of the battery. The built-in intervalometer makes this kind of setup dead easy and without the risk of bumping the camera and changing the framing.

The Agony And The Ecstacy Of Star Trails Post-Production

I got the images into Photoshop and began the process of assembling them into star trails. I noticed two things right away: how the image itself came together seamlessly and how insanely sharp everything looked. I find that the 24mm f/1.4 G Master lens is an absolute treat for astrophotography and it rendered my image beautifully.

Post-processing for a shot like this was easy and difficult at the same time. Conceptually, all I had to do was load the star trail images into a stack in Photoshop and change the blend mode to Lighten. That was the easy part (well, aside from waiting for Photoshop to load them into an 18GB working file). After that, I incorporated a light-painted image of the church building to bring in some of the details of the structure. From that point, for me it became digital art more than photography as I tried to blend everything together as harmoniously as possible. I had to pay careful attention to the bright area in the bottom right and mitigate the intensity of it in order to keep the viewer's eye in the middle of the frame. All in all it followed my post-processing philosophy of vibrant, rich colors illustrating an epic scene.

I finished the image and sat back. It took my breath away. The star trails rotating around a 130-year old steeple was unlike anything I had ever seen.

See more of Andy's Work here. Join Alpha Universe and complete your public profile. It’s free and you’ll have a chance to be featured on Alpha Universe! Click here to learn more.

What’s In My Bag: The Full-Frame Cameras, Zoom Lenses & Other Gear This Photographer Uses For Astrophotography & Golden Hour

Behind The Shot: How A Novice Photographer Captured The Milky Way & Glowing Water

What’s In My Bag: The Full-Frame Cameras, Zoom Lenses & Other Gear This Photographer Uses For Astrophotography & Golden Hour

Behind The Shot: How A Novice Photographer Captured The Milky Way & Glowing Water