Harry Dinnen (@harrydinnen) is a photographer & director of photography based in Adelaide, South Australia. Photographing the vast Australian landscapes has always been a core aspect and main inspiration for his photography, a hobby that started 15 years ago and has recently transitioned into a business. Much of his work focuses on outdoor, travel, wildlife, underwater, astro and lifestyle subjects and he is known for his shots that are punctuated by raw, powerful landscapes. Harry strives to share his vision of wild places, and to inspire them to explore for themselves. He took this photo with his Sony Alpha 7R III and Sony 16-35mm‌ ‌f/2.8 G Master. Check out his story about how he photographed the shot below. 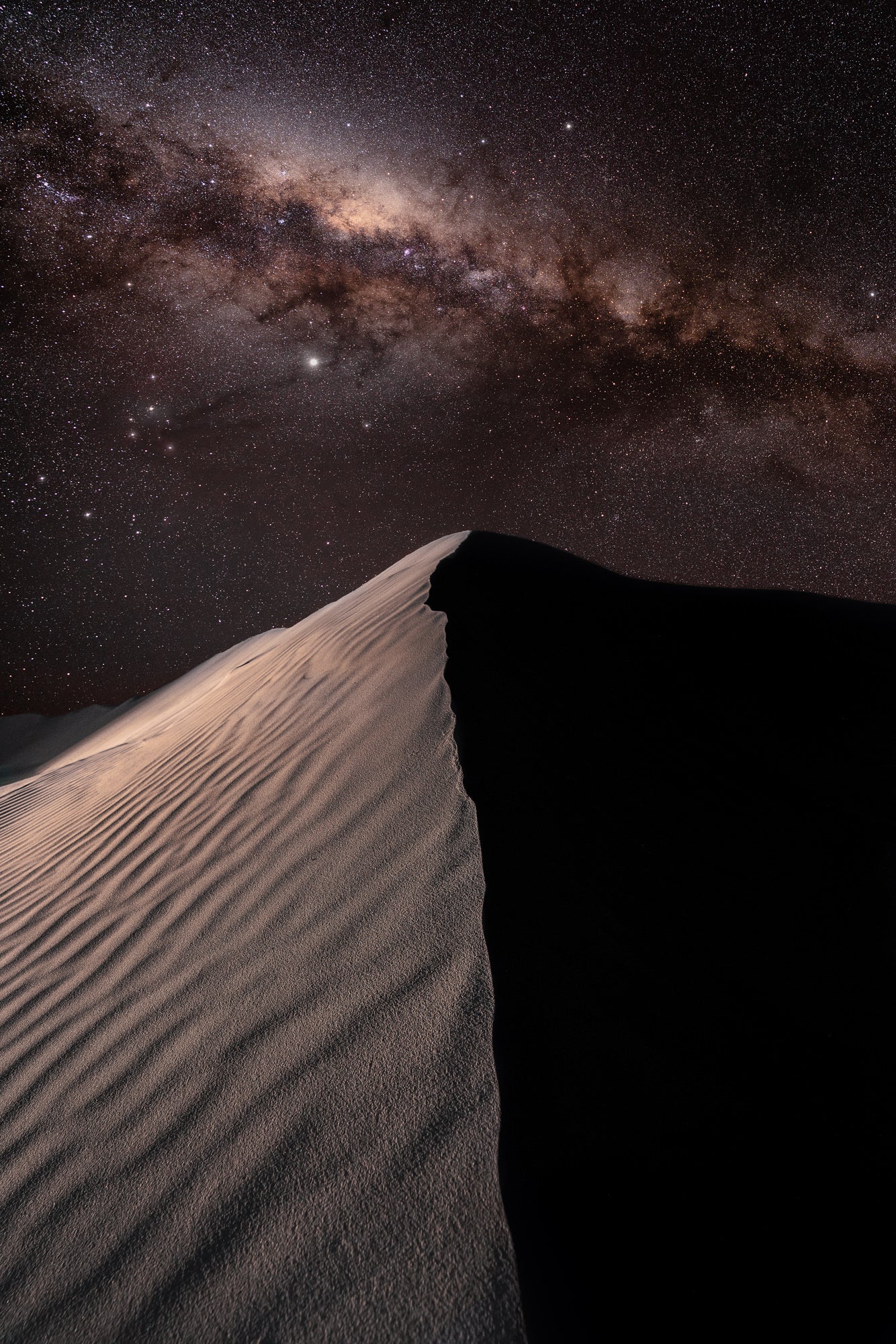 See how this photographer used a Lumecube and a Sky Watcher Star Adventurer for this dramatic Milky Way composite, shot with a Sony Alpha 7R III & 16-35mm‌ ‌f/2.8 GM.

This photo was taken on a solo trip in the remote and rugged Eyre Peninsula 630km West of Adelaide, where the Milky Way can be shot with almost no light pollution. I chose this area to shoot for the almost endless formations of the sandhills and the textures and patterns, it is also home to some of the darkest skies in South Australia.

Leaving Adelaide at 4pm, the low cloud fronts and the many moods of the Eyre Peninsula had me second guessing my decision for this shot, and left me wondering if I should continue the pursuit. Arriving around 12:30pm I began searching for the right composition, hoping the cloud would clear before the Milky Way set. Finding a sandhill pointing in the right direction, without getting lost was difficult because of how dark it is. After about three hours of searching I found this composition, just as the Milky Way came into frame.

For this shot I used the Sony Alpha 7R III & Sony 16-35mm f/2.8 G Master lens, with a Sky Watcher Star Adventurer Pro star tracker on a Manfrotto Tripod to deal with the weight to ensure there’s no camera shake.

The Sony Alpha 7R III has been my favorite camera system to use. The 15 stops of dynamic range and the noise-free images, especially when you have a high ISO, was a major factor for capturing this photo. I love shooting wide, the Sony 16-35mm f/2.8 G Master is one of my favorite lenses to use. The low distortion and corner-to-corner sharpness makes it one of the best lenses out there for landscape and astrophotography.

This shot is a combination of two images, a foreground shot lit with two Lumecube lights and a tracked Milky Way shot.

The foreground was shot in manual at f/8 and ISO 3200 with a 30-second exposure, low to the ground and slightly underexposed. I had a few flashes from a Lumecube to light up the left side of the sand dune, while keeping the right side completely dark.

The Milky Way was shot in manual using a Sky Watcher Star Adventurer Pro at f/2.8 ISO 400 and a 257-second exposure. I use a star tracker because it allows me to take longer exposures of the stars or Milky Way at a lower ISO. I generally shoot 4-8-minute exposures, which allows me to turn my ISO all the way down to 400. My pictures of the sky and stars are crisp with ample detail, no noise and no trailing stars. In order to make the star tracker move in the correct direction and speed, I align it with the South Star, Sigma Octantis (you align with Polaris, the North Star, if you’re in the Northern Hemisphere). This step is crucial because if it isn’t done correctly you’ll have trailing stars in the frames. Due to the weight of the camera and star tracker, I use a Manfrotto 055XPRO3 tripod to ensure there's no camera shake while exposing the sky.

Post-processing this shot was a blend of Lightroom and Photoshop to balance and blend both the images together. First I began the process by selecting which of the shots had the best exposure and sharpness. I then used Lightroom to balance the temperature, exposure, blacks, shadows and used local adjustments to highlight the core of the Milky Way. From there I exported both the photos to Photoshop. I generally use the same method while in Photoshop.

After blending the images together I use alpha channels to dodge & burn and use levels and curves for further balancing to help the image pop. I also use Photoshop to reduce noise and increase sharpness to polish the image off, however this image didn’t need much editing after being blended and balanced in Lightroom.

See more of Harry Dinnen’s work on his Alpha Universe Profile and on Instagram @harrydinnen.

What’s In My Bag: A Sony Alpha Kit For Mesmerizing Astro-Landscapes & Beyond

What’s In My Bag: A Sony Alpha Kit For Mesmerizing Astro-Landscapes & Beyond