Mike Meyers (@mmeyers76) is a Chicago-based photographer and creative who primarily shoots urban and natural landscapes. The Alpha Collective member has spent a lot of time on the streets of the Windy City, capturing the breathtaking views such a city has to offer. When recently out with the Sony Alpha 1 and the new Sony 24-70mm f/2.8 G Master II lens, he created this beautiful blue hour cityscape. We connected with him to learn more about how he was able to capture such detail – keep reading as he shares his story behind the shot. 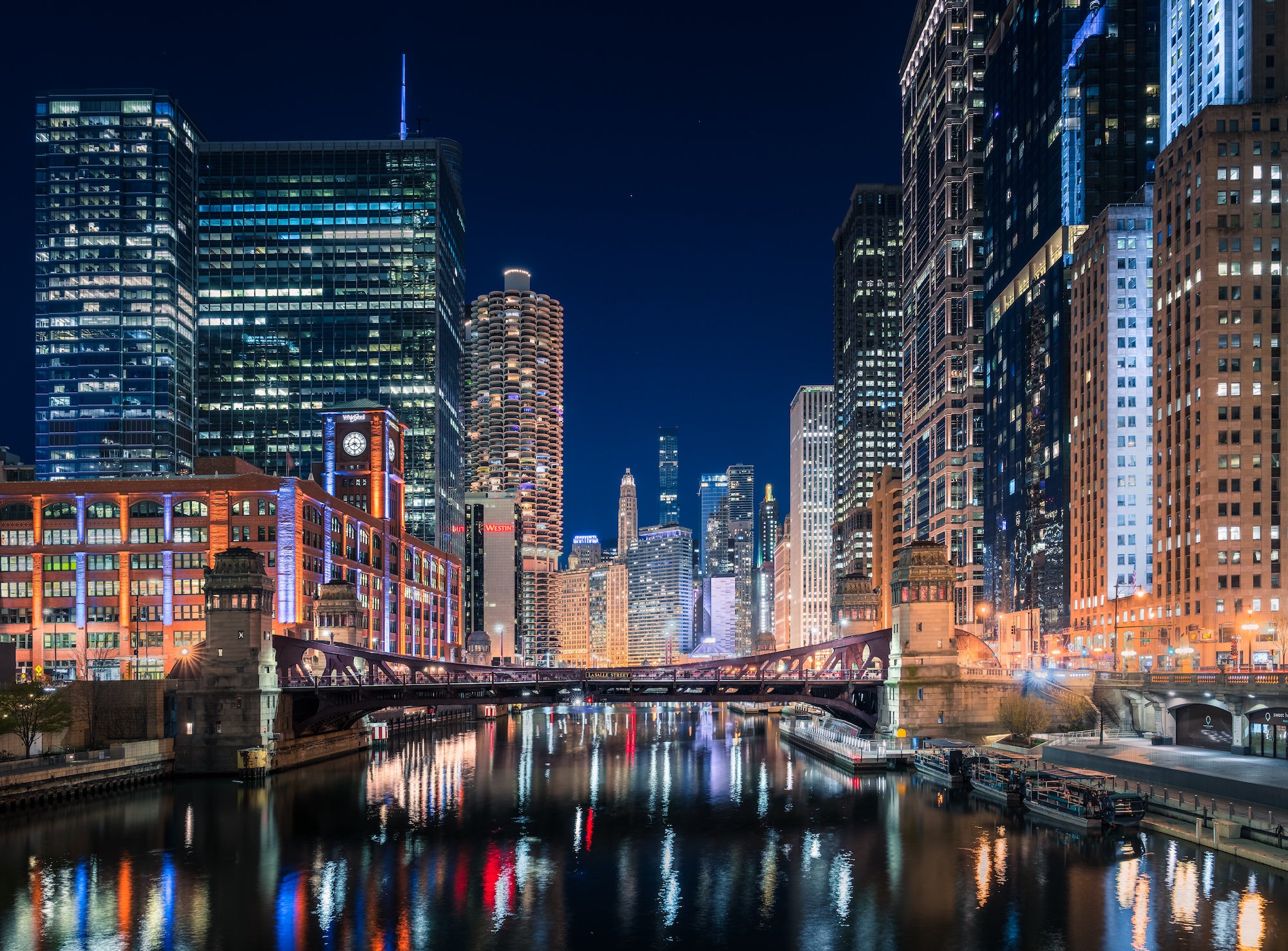 Mike Meyers of the Alpha Collective explains how he used bracketing to capture the ultra-sharp details of this stunning Chicago scene with a new do-it-all zoom.

“I’ve shot pretty much every spot in Chicago at least once before,” Meyers explains. “So I kind of know what looks good in what range, and this is one of my favorite blue hour spots to hit. There's a ton of architecture there with really cool buildings and different kinds of lights. You also have the bridges and the reflection coming off of the water. It’s just a cool stretch of Chicago down the river there from both sides, and I chose to shoot it from ground level facing back east.”

The 'No Excuses' Gear Combination

To create this image, Meyers had the new Sony 24-70mm f/2.8 G Master II lens attached to his Sony Alpha 1, a combination he says is about as good as it gets. “You have the Alpha 1, which as far as I'm concerned is the best camera out there that exists. And then you have a G Master lens and it's the second iteration of it. I loved that first lens and probably used it in over 50% of the photographs I’ve taken. But now you have the second iteration of that. It's sharper, it's smaller, it's lighter, faster focusing, coupled with the best camera on the market. I mean, it better be a good shot, right? The one drawback with this combination is you're all out of excuses. You can't blame your gear if the photo doesn't come out right with that combo.”

Having shot this spot before, Meyers knew he wanted to shoot a longer exposure to smooth out the water. “You get some of those nice, soft reflections from some of the lights in the different buildings, and then a wash of different colors, so it just adds a bit of interest to the bottom half of the photograph since there isn’t really a foreground you can shoot.”

Meyers put the Alpha 1 and 24-70mm f/2.8 G Master II on a tripod and found his spot on an old bridge. The problem with the bridge is that as traffic moves over it, the entire thing shakes, making it difficult to take a long exposure without camera shake. “This is definitely one of those shots you never get on the first try,” he says. “You have to do it over and over again hoping that no one walks or drives by. I would have loved to take a 32-second exposure, but you almost never have 30 seconds of blue hour to shoot without at least one car going across that bridge. Even foot traffic will shake the bridge a little bit if they're on the same side as you. So I was only able to get away with an eight second exposure without any traffic going by to get a really nice, clean shot without any movement. Then I will bracket these shots because the highlights will get blown out a little bit, so I want to make sure I've got everything properly exposed.”

To bracket the shots, Meyers set his Alpha 1 to take three images at three different exposures. “Three is normally enough for any scene,” he explains. “It will take one exposure at the settings you have on your camera. Then it will take a shorter exposure that will be darker, and a longer exposure that will be brighter. So what it essentially does is takes that middle ground shot, kind of how you see it through your camera.”

“The shorter exposure exposes for highlights to pull down those that might be blown out from the first exposure. Having that faster shutter speed will mean less light getting into the camera so those super bright highlights will be properly exposed. Then with the third shot, more light gets into the camera. So the things you might not be able to see, like the details in the darkest shadows of your first shot, will be brought up and you’ll be able to get more detail. I actually ended up not needing the third shot for this – the shorter exposure to properly expose the highlights. So it was really only two shots, but it’s easier to set up a bracket.”

Bringing It All Together In Post-Processing

Once Meyers got the shots he needed, he brought them into Lightroom to edit them. He starts with the base exposure, the first image, and edits it to his liking. “I make sure the buildings are properly aligned, straight up and down as well as straight across,” he says. “Then I tweak the different sliders in Lightroom and play with the curves to get the shot looking exactly how I like it, minus the blown out highlight part.”

Once he has that first shot where he wants it, he copies and pastes those settings into the shorter exposure, the second shot that is exposed for the highlights. “It will take those exact same settings that you have for the base exposure into the shadow for that second shot. So now I have two identical shots that are edited exactly the same, but the first one exposes for everything except the highlights and the second one is going to be darker so I just make sure the highlights are properly exposed for that. Then I bring both of those into Photoshop and align them. Then I used a luminosity mask to basically brush in the darker highlights over the exposed highlights.”

Meyers is a big fan of the 24-70mm focal length and sees himself using this new lens in the future for his work. “For me, the 24-70mm range is the most useful. While it might not be considered an incredibly creative lens or unique focal length, it ends up being the range that I use the most because what I want to capture in frame just seems to fall between 24 to 70 more times than not. It's like you're seeing stuff kind of look natural to how your eye sees it. So I end up using it for a lot of stuff, especially commercial work. It's just a really great focal range that you know you're going to use a lot. So if you're going to be using it as much as I do, being able to have the best lens out there to capture stuff is kind of a big plus.”

See more of Mike Meyers’ work on his Alpha Universe Profile and on Instagram @mmeyers76.