Travel and adventure photographers Matthew (@matthewhahnel) and Renee (@reneeroaming) Hahnel create imagery that inspire other travel and adventure seekers to find joy in exploring our beautiful world. The husband and wife content creation duo can often be found hiking in the great outdoors, working together to create exhilarating images with breathtaking views. As longtime fans and users of the Sony 24-70mm f/2.8 G Master lens, when asked to test the new Sony 24-70mm f/2.8 G Master II the Alpha Collective members knew exactly how to put it through its paces. They captured this incredible image with the new lens attached to their Sony Alpha 1, and we connected with Matthew to learn more about how he and Renee worked together to create it. Keep reading as he shares their story behind the shot. 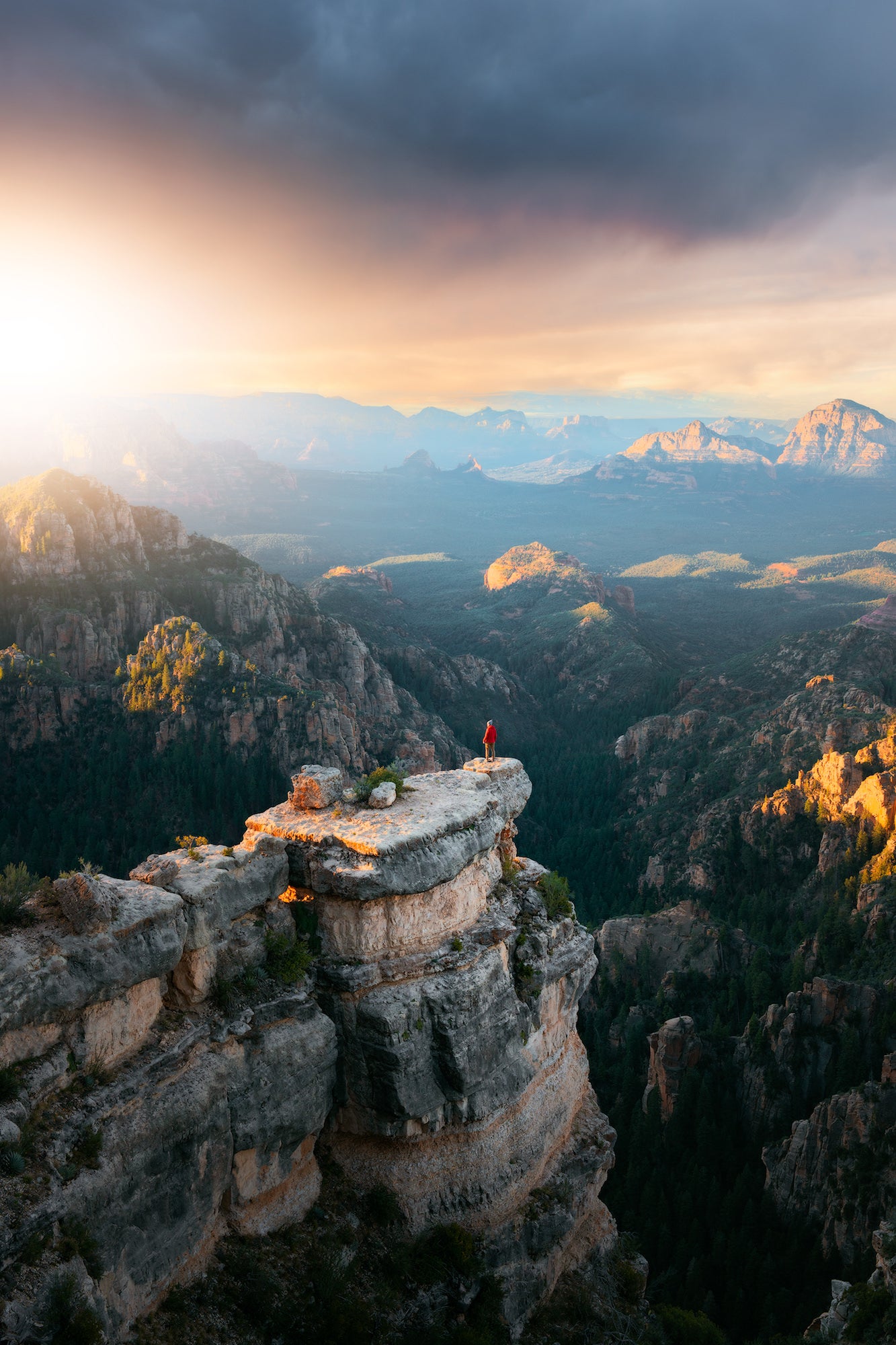 To capture this photograph, the two traveled to a remote area outside the town of Sedona, Arizona. “I had seen photos of a different, strangely shaped rock in this area before,” Matthew explains, “and I wanted to see if I could come away with a unique image of the rock that I was happy with. Once I arrived, I spotted the rock ledge in this photo and I felt it was a more interesting scene than the other spot which was far more photographed.”

As early testers for the new Sony 24-70mm f/2.8 G Master II, Matthew and Renee had the chance to get hands-on experience with the lens. “The Sony Alpha 1 is my primary camera and I use it for 100% of my photo work,” says Matthew. “It has the resolution I need to provide clients with high resolution images, incredible dynamic range, and a trustworthy autofocus system. My most-used lens has always been the Sony 24-70mm f/2.8 G Master (Version 1), so when I had a chance to test out the new version I was shooting with it as much as possible. The new Sony 24-70mm f/2.8 G Master II was perfect for this photo as it allowed me to try both some wider and also more zoomed in versions of this scene. Ultimately I landed somewhere in the middle.”

When the Hahnel’s arrive at a scene, they scout out the different angles to see which might make for the most interesting perspective. Matthew explains, “As I arrived at the other rock I intended to photograph, I was scouting the surrounding mountainside and noticed this rock ledge. I wandered over and explored multiple different angles from close up on the rock, and far away above it. I ended up liking this further away angle as it provided a raised view looking down onto both the rock ledge, as well as the deep canyons below.”

He continues, “The image was captured with a tripod and two-second timer as the scene was quite dark. My wife Renee was pressing the shutter after I climbed down to the vantage point to pose for the photo as the sun rose above the surrounding mountains to illuminate the scene. The settings for the photo ended up being 1/125-sec. as this was the lowest I wanted to go so to ensure no motion blur as I was posing on the rock, f/6.3, enough to provide sharpness throughout the entire scene while allowing me a faster shutter speed, and ISO 100, which ensured the image would be free of grain and preserve the most dynamic range.”

After using the new Sony 24-70mm f/2.8 G Master II, Renee and Matthew say it builds on everything they love about the original. “It takes all of the great aspects and cranks them up a notch. We found the new 24-70mm f/2.8 G Master II to have incredibly accurate autofocus paired with the Alpha 1's continuous autofocus, great bokeh. We also really appreciated the decreased size from the original. As photographers who spend a lot of time hiking in remote areas with a ton of gear, our backs really appreciate the lower weight.”

Because the image had areas of extreme brightness and also extreme darkness, Matthew used Lightroom and Photoshop to work out the proper exposure. “This scene was honestly a tough one to edit,” Matt says. “The shadows in the canyon were incredibly dark, and the highlights of the sun hitting the rocks were very bright. I had to work quite a lot with luminance masks in Lightroom and Photoshop to achieve a balanced exposure free of blown out highlights or completely black shadows. I also accentuated the side lighting in Photoshop to provide a bit of extra drama to the scene.”

See more of their work on Instagram: Matthew (@matthewhahnel) and Renee (@reneeroaming).