Elopment photography is not easy. It's an intimate and pivotal event in the lives of the couple and they have put their trust in the vision of the photographer to create the memories of their vows that will last a lifetime. It's a challenge that Alpha Imaging Collective member Henry Tieu (@henrysdiary) embraces to the fullest. “I specialize in elopements and intimate weddings because of the intimate nature of the day,” he explains. “I also use the term ‘elopements’ and ‘intimate weddings’ interchangeably because I do see them as the same. Regardless of no guests or some guests, both really value freedom of expression, freedom from what many might consider ‘traditions,’ freedom to have the day so the couple can remember the day for exactly what it is. The freedom in elopements allows each couple to place emphasis on themselves and their relationship regardless of what others might say.” We connected with Tieu about how he created this double exposure/composite image from exposures made with his Alpha 7 IV and two different Sony G Master lenses, and why it's such a special image for the couple and for him. Keep reading as he explains the story behind the shot. 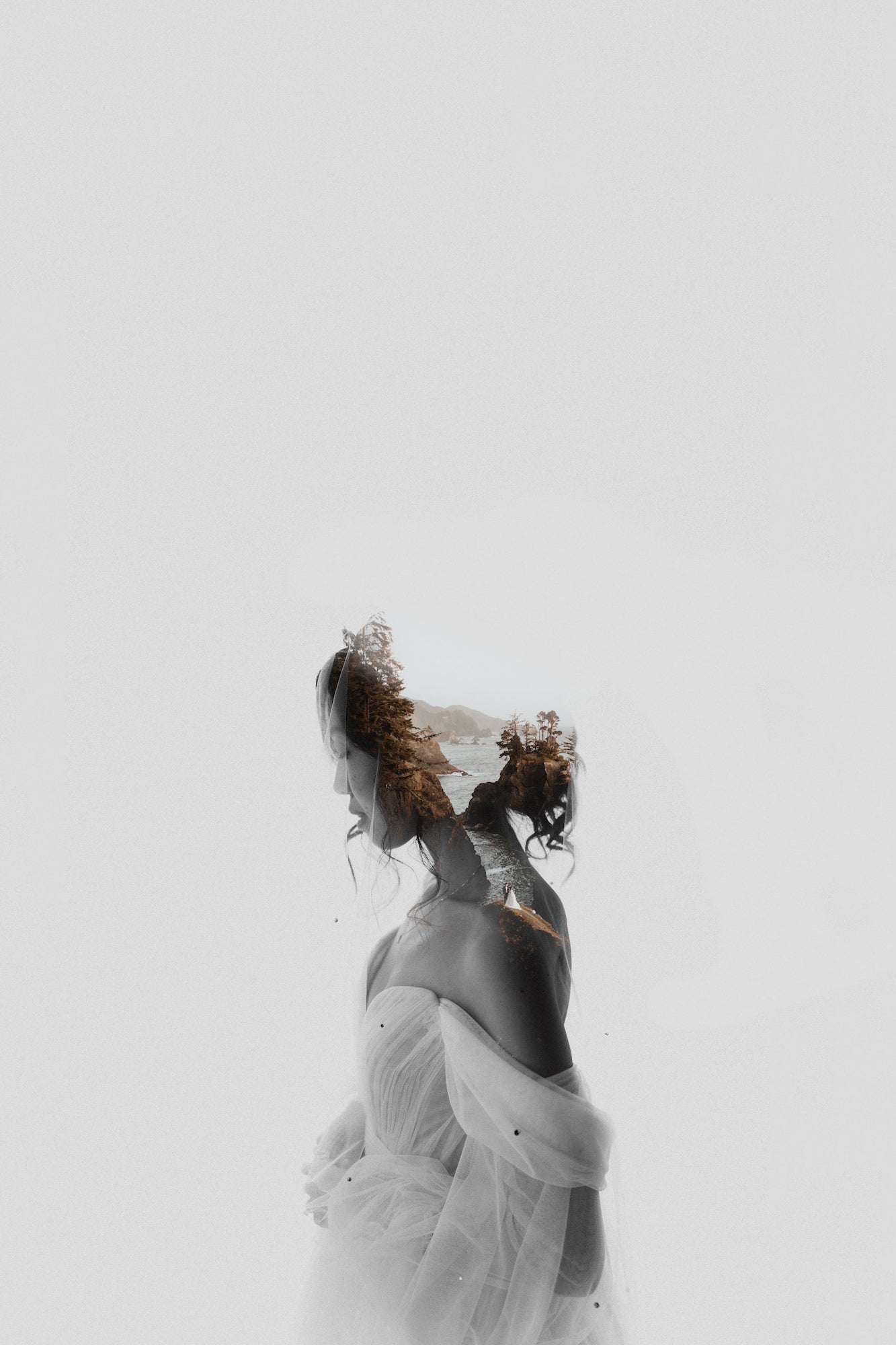 How elopement photographer and Alpha Collective member Henry Tieu created an image to encapsulate all the feelings of the couple's an adventure elopement.

Building An Image In Your Mind

This image was captured on the Oregon Coast. While documenting getting ready photos, I saw how the bride walked across this big window looking into the ocean. I knew I wanted to create some sort of double exposure to encapsulate both the bride and the landscape in one image. However, I also noticed that I would love to incorporate the groom somehow as this is THEIR wedding day and it should consist of both the bride and the groom, not just one or the other.

Knowing I couldn’t get the groom in the first image in front of the window as they hadn't seen each other yet, I had to think about what other ways I could get him in this double exposure so I knew my second image needed to have him and the landscape. With that in mind, I knew I needed a wide photo where the couple is super tiny in this big landscape. I really love the way that with the bride’s silhouette during getting ready photos, I can feel the anticipation, the nervousness, the excitement she longed for this day to happen.

All those emotions mixed with the carefree image of the couple in the landscape, this double exposure isn’t just about a “cool photo” but a little sneak into all the feelings of an adventure elopement day.

The first image is the one of the bride’s silhouette. I used the Sony Alpha 7 IV with the Sony 35mm f/1.4 G Master for this image. This combo is my go-to for indoor portraits as it’s wide enough for small spaces but also versatile enough where I can quickly go from wide to close up without having to constantly switch lenses as “getting ready photos” are quite fast-paced.

The second image was documented on my Sony Alpha 7 IV with the Sony 24mm f/1.4 G Master as it’s the best landscape lens I’ve ever used. I chose this lens in order to get a super wide shot of the landscape without fears of distortions

Since a wedding day can be very busy and fast-paced, I photograph everything handheld. The setting of this image was 1/640-sec., f/2, ISO 250. I used Adobe Lightroom to do color correction and Adobe Photoshop to overlay the two images together. Since the bride’s skin tone is quite close to the landscape’s color palette, I edited the bride’s portrait black and white in order for the color of the second image to pop a bit more.

What’s In My Bag: See This Photographer’s Kit For Capturing Landscapes & Elopements In Scenic Locales

What’s In My Bag: A Photographer's Kit For Documenting Adventurous Weddings & Elopements

Henry Tieu is a member of the Sony Alpha Imaging Collective. Follow all of their adventures on Instagram https://www.instagram.com/henrysdiary/.

What’s In My Bag: See This Photographer’s Kit For Capturing Landscapes & Elopements In Scenic Locales

What’s In My Bag: A Photographer's Kit For Documenting Adventurous Weddings & Elopements