Legendary film director Stanley Kubrick was also a skilled still photographer and when asked about his photos and how he composed with a wide perspective, he's said to have remarked "I see in 20mm." 20mm is a unique focal length that creates impact and practically cries out for experimentation. It's considerably wider than the more staid 24mm or 28mm and yet more reined in than an ultra-wide 16 or 12mm. It might not be the lens you use for everything, but like a perfectly-machined key fitting into a lock, when it's right, it's perfect. The Sony new 20mm f/1.8 G lens is has quickly become a favorite among many photographers and filmmakers. Portraits, astrophotography, landscapes, street – there’s just so much you can do with this compact, lightweight, fast wide-angle prime. This week we’re featuring a group of photographers who have used the lens and posted their work to Instagram. Tag your Sony photography posts with #BeAlpha and follow @sonyalpha for your daily dose of Sony photo inspiration.

Tag your Sony photography posts with #BeAlpha and follow @sonyalpha for your daily dose of Sony photo inspiration.

Nate is a Sony photographer and member of the Alpha Imaging Collective. He just posted one of his timelapses that he took in Norway months ago and forgot to share. He took it using the Sony 20mm f/1.8 G and says, “Took this timelapse while reviewing the brand new @sonyalpha 20mm f/1.8 which is STILL my single favorite lens for astrophotography.” Want to read more of his thoughts on the lens? Check out his full review after putting the lens through its paces.

Oveck is another member of the Alpha Collective. He shoots mesmerizing portraits, landscapes, street shots and more, and he also had the chance to try out the Sony 20mm f/1.8 G lens before social distancing. Wide angle isn't typically his style, but for this lens he's willing to make an exception. "I‘ve been pleasantly surprised how much use I’ve given this particular lens... from portraits, street photography to landscape." Give his account a follow for more beautiful shots from different perspectives.

Mike is a Sony photographer based in Alaska. On his Instagram account you’ll find stunning astroscapes, landscapes and more. He took the Sony 20mm f/1.8 G lens and his Sony α7 III out one night to capture this long exposure star trail shot with light painting. Check out his account to see more of Alaska’s natural beauty both day and night.

Forrest is a Sony photographer, with the Sony α7 II being his main camera. If you scroll through his account you’ll see a variety of drone shots, landscapes, cityscapes and more. He recently got the Sony 20mm f/1.8 G lens and says he’s been having too much fun with it. He used it to take this cool self-portrait and you’ll have to check out his account to see what other great shots he’s snagged using the new lens. 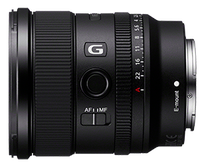