Tor-Ivar Næss (@epicnaess) is a professional Sony photographer based in Norway. We recently came across this mesmerizing image he took of the dancing aurora borealis and its reflection on a lake and caught up with him to learn more about how he captured it. Keep reading to see how he created this image using his trusty Sony Alpha 7R IV camera and a fast wide-angle zoom. 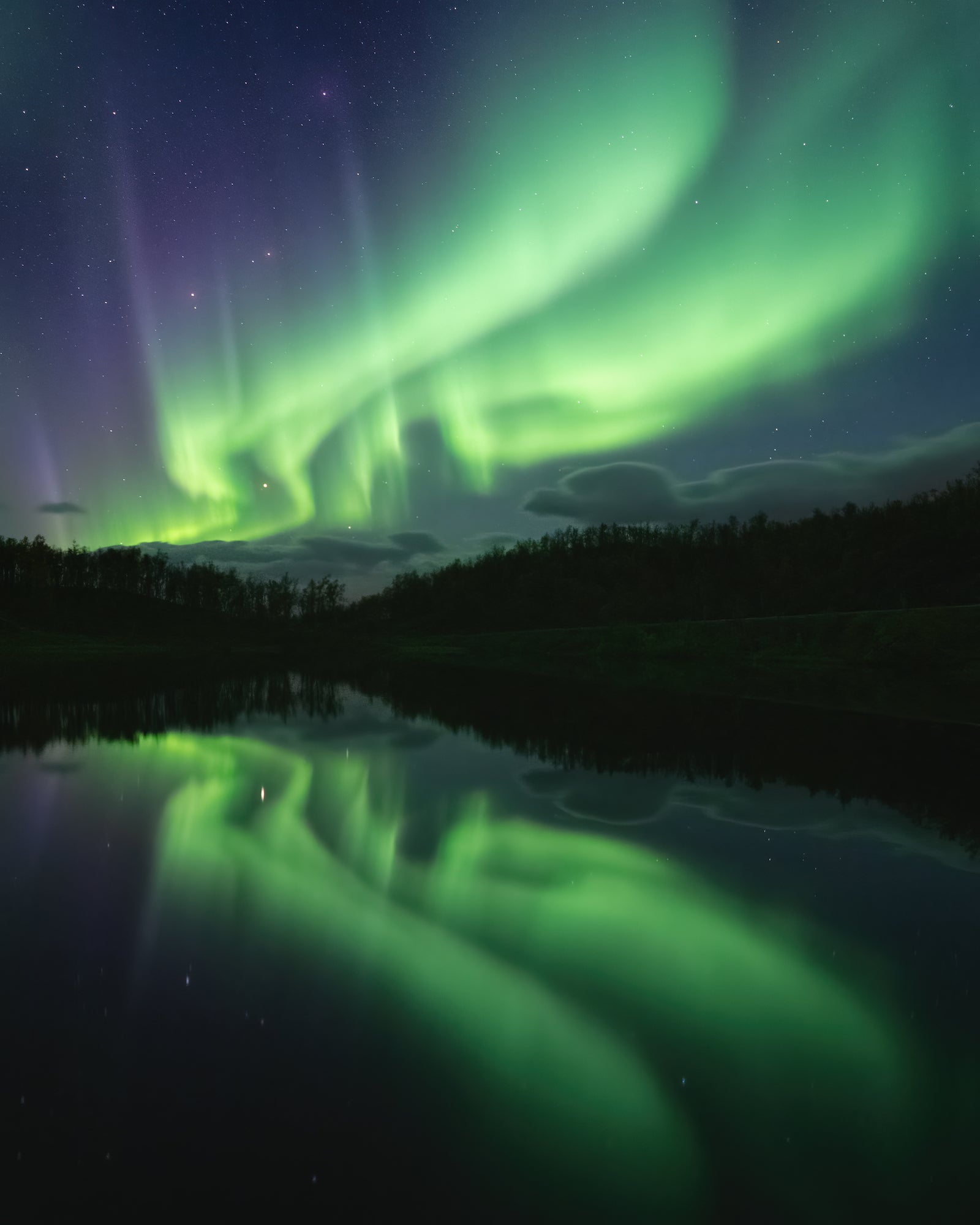 “The scene itself was captured at a lake in Sørkjosen, Nordreisa, Norway during the autumn of 2020,” says Næss. “The area has become a nice location for night photography as the road is no longer the main road to get over the mountain and as most astrophotographers know, the temperature decreases with altitude and the sky becomes clearer. It obviously is nice when no cars are using the road anymore.”

“During autumn, I find that finding a reflective surface for capturing the auroras is the way to go. The terrain more or less is non-reflective apart from the dew on the ground, but without any moon present this does not add much unless you double or even triple expose the capture. This shot is a single frame, which I found to be OK because apart from the reflection, the darkness concealed the road well enough. My position was not random either as over the years you get an understanding of what places in the sky the auroras will show up during certain activity levels. This is something normal enthusiasts refer to as the KP-index, a geographical measurement of the aurora oval, expanding from the magnetic north (or south) pole and toward the equator. A good KP-index is a general indication of a massive display of auroras, but the closer you live to the North Pole the more frequently you’ll be able to see magnificent auroras - by that I mean the ones that move insanely fast and has a vivid color spectrum as the bursts across the night sky.”

Using the Sony Alpha 7R IV and Sony 16-35mm f/2.8 G Master, Næss snapped this shot at just the right moment. “Living under the northern lights provides me with the benefit of just waiting for the sky to be clear enough, explains Næss, “and with my main job within air traffic, I have a decent understanding of weather patterns locally. So I can go out when I know things will change or stay the same.”

He captured the image at 16mm with his settings at 8-secs, f/2.8 and ISO 3200. “The specific settings I used in this situation is a reflection of the movement in the auroras and the capabilities of the camera. The faster the movement of the auroras, the faster shutter speed you want to get structure. I have since upgraded my kit from the Alpha 7R IV and the Sony 16-35mm f/2.8 GM to the Sony Alpha 1 and Sony 12-24mm f/2.8 G Master and look forward to utilizing even better ISO performance with this combination.”

What’s In My Bag: See How This Landscape & Astro Pro Packs For Travel To Parts Unknown

What’s In My Bag: See How This Landscape & Astro Pro Packs For Travel To Parts Unknown