Find out what creators and reviewers are saying after getting their hands on Sony’s newest does-it-all G-series zoom.

“I think one of the biggest pros of this lens is the close-focusing distance. It can focus crazy close. I absolutely love it. So if you’re into some macro shots, you can get relatively macro with these ones. Not crazy close, but for a 20-70mm it’s actually quite good because if you want to get close up on someone’s eye, you want to get close up on a watch, you have that ability with this lens.” – Jason Morris

“There seems to be a really big push toward trying to make these lenses really perform optimally not just for photography now but for video, because they are noticing that a lot of people are hybrid shooters and want to create some video content. And these lenses are absolutely suited for that because it has a nice, smooth focusing ring, they’re pretty much power focal, the autofocus is incredible when it comes to photo and video, and it’s just an all-around banging lens when it comes to photo and video.” – Jason Morris

“I’ve actually gotten some of my favorite photos I’ve ever taken with this lens, some of which I probably will be printing. So if you’re looking for one lens to suit a variety of different needs for both photo and for video, you want it to be very sharp, you don’t want to spend a lot of money and you want it to be very travel-friendly – this without a doubt is what you need to be looking at. Just stop looking, it’s the 20-70mm f/4 from Sony.” – Chris Brockhurst

“The 20-70mm f/4 G lens is a great option for any photographer or video shooter looking to hit that sweet spot of performance, affordability and flexibility. It’s one thing to have a lens with a helpful zoom length, or a lens with a constant aperture that can either be clicked or declicked, or a lens with two customizable focus lock buttons, or a lens that’s lightweight, portable and weather-resistant, or a lens that compensates for focus breathing and axis shifting. BUT a lens that combines all of those features ends up being greater than the sum of its parts, resulting in a powerful lens that, as we discovered, is also flexible enough to be the only glass you may need to bring with you on your next shoot.” – Nick Brigadier

“What’s not to love about this lens? It’s compact. It’s optically good. I like the f/4 aperture. I mean frankly if this is a 24-70 f/4 that I was walking around with, I would have had a great day today. But the beauty is that I get that extra wide angle.” – Chris Niccolls

“I’ve had such a great time with this. I mean this is probably my favorite standard zoom I’ve used from Sony to date. Just really, really nice to have.” – Chris Niccolls

“It’s definitely one of my favorite lenses that’s been announced in a while. Just because I love the versatility, I love that it’s so compact. Affordability is really nice too. A lot of the time we’re reviewing these super high-end lenses so having something that more people are going to be able to enjoy makes me happy.” – Evelyn

“Yeah, and to get that down to that 20mm range you’d have to have a separate lens in the past for that. It goes even much wider than that, however I’m finding 20mm is really sufficient for a lot of wide-angle needs, especially as a walkaround. So I can see myself grabbing this lens and body combination a lot to go out and shoot just general purpose stuff.” – Dave

“I think it would make an awesome kit lens to pair with any of Sony’s new full frame bodies. The image quality’s insane. It’s razor-sharp all the way through the zoom range and I was really surprised at how smooth the bokeh was at f/4 around that 50mm-70mm range. It’s also rocking two XD Linear Motors which is more of a G Master thing, but it’s nice to see that this lens is insanely fast and silent.” – Lee Zavitz

“This is actually a viable lens to keep in your camera bag if you want one lens to cover it all. Like that focal range kind of blows my mind and I wish this lens came out when I first started because this would be the first lens that I would totally get.” – Sidney Diongzon

“If you are a brand new wedding filmmaker and you’re looking for your first lens to purchase that will be very versatile, and you also just bought a gimbal and you’re needing a lens. It’s going to work great on a gimbal as well. I think this new Sony 20-70mm is a very versatile choice that’s going to work great on a gimbal, great handheld, and give you a lot of flexibility when filmmaking.” – Matt Johnson 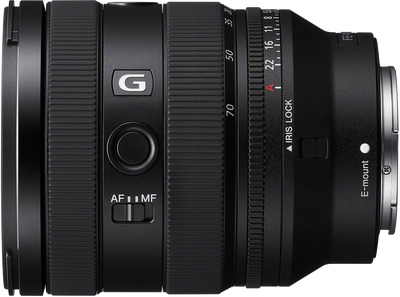