Every three years, one of the most intense and challenging races in the world begins. The elite crews that set off in the Volvo Ocean Race face weeks at sea, under a near constant onslaught of fierce wind and spray and bone-chilling cold that saps the body’s strength. In these conditions, the competitors are constantly working to make their boats go just a fraction faster and their course to the next checkpoint just a fraction more efficient. Although it covers some 40,000 miles, the VOR is a race of inches.

In 2014, the race included the all female Team SCA. Corinna Halloran was part of that crew of 15 women who trained for more than 18 months and came in sixth overall. Halloran was the On Board Reporter and she used a Sony RX100 III protected from the elements in a Fantasea housing to chronicle the race that’s known as the Mt Everest of the offshore sailing world. She recounts some of the experience in words and pictures for Alpha Universe.

As the On Board Reporter, you are responsible for all of the media coming off the boat whilst racing. The ‘OBR’ is the storyteller— the photographer, the videographer, and the writer… as well as the chef, the cleaner, the morale booster, and the primary liaison for live interviews between land and the boat. For me, to be one of the On Board Reporters for Team SCA was both a dream and a career goal. I knew that, over a period of a year, I would be filming and photographing a team of powerful women in an environment I loved— the Ocean. I knew that I would be pushing my own work as the race took place. You’re shooting and making art every single day of the same thing, the same people, for weeks on end. Needless to say, you begin to get a little creative as you become a better storyteller and artist. It’s a dream job and a wonderful job as well, but it is both emotionally and physically taxing. 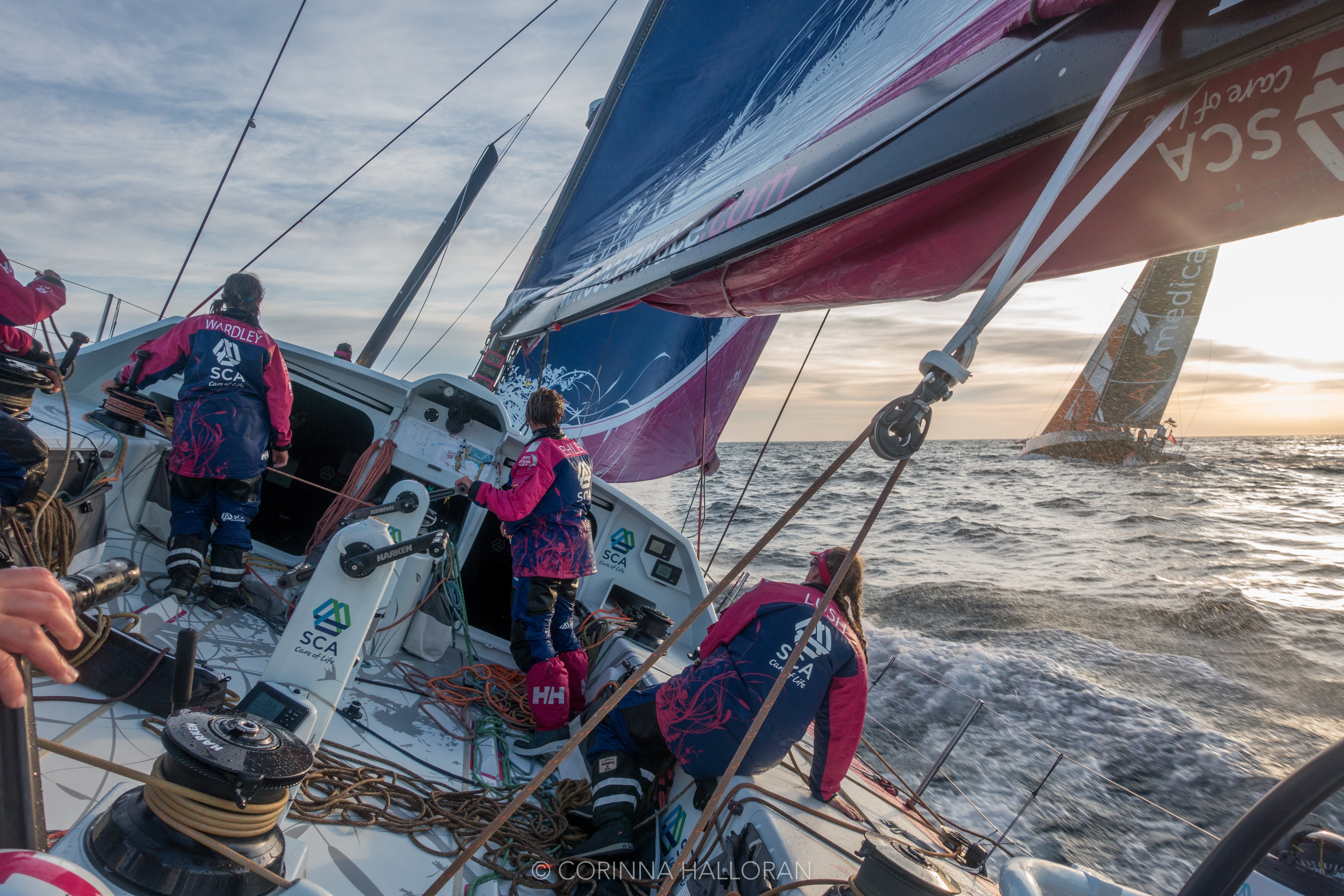 Departing Cape Town, South Africa was one of the most intense starts to a race I have ever seen. We saw everything from 0-42 knots in the bay and we were moments from sunset. Here, the team is full steam ahead, just behind Team Alvimedica. 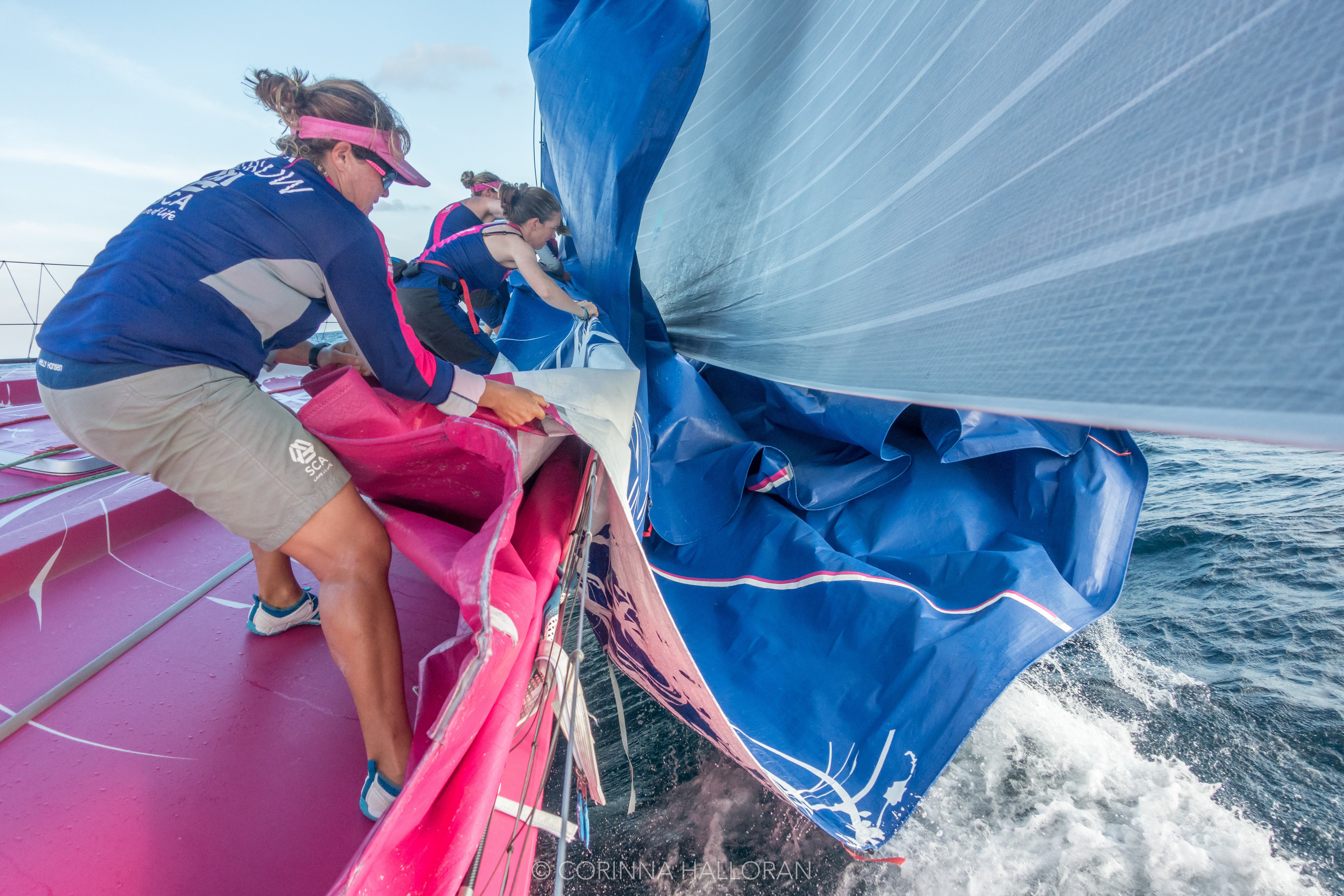 Living, eating, and working at any degree of heal while the boat is simultaneously crashing upwind is not an easy feat. Here, Sally Barkow and the rest of Team SCA helped bring down the smaller, J1 sail shortly after putting up a larger sail, but as the wind picks up, and the boat heels over more, bringing in the sail becomes more and more challenging. 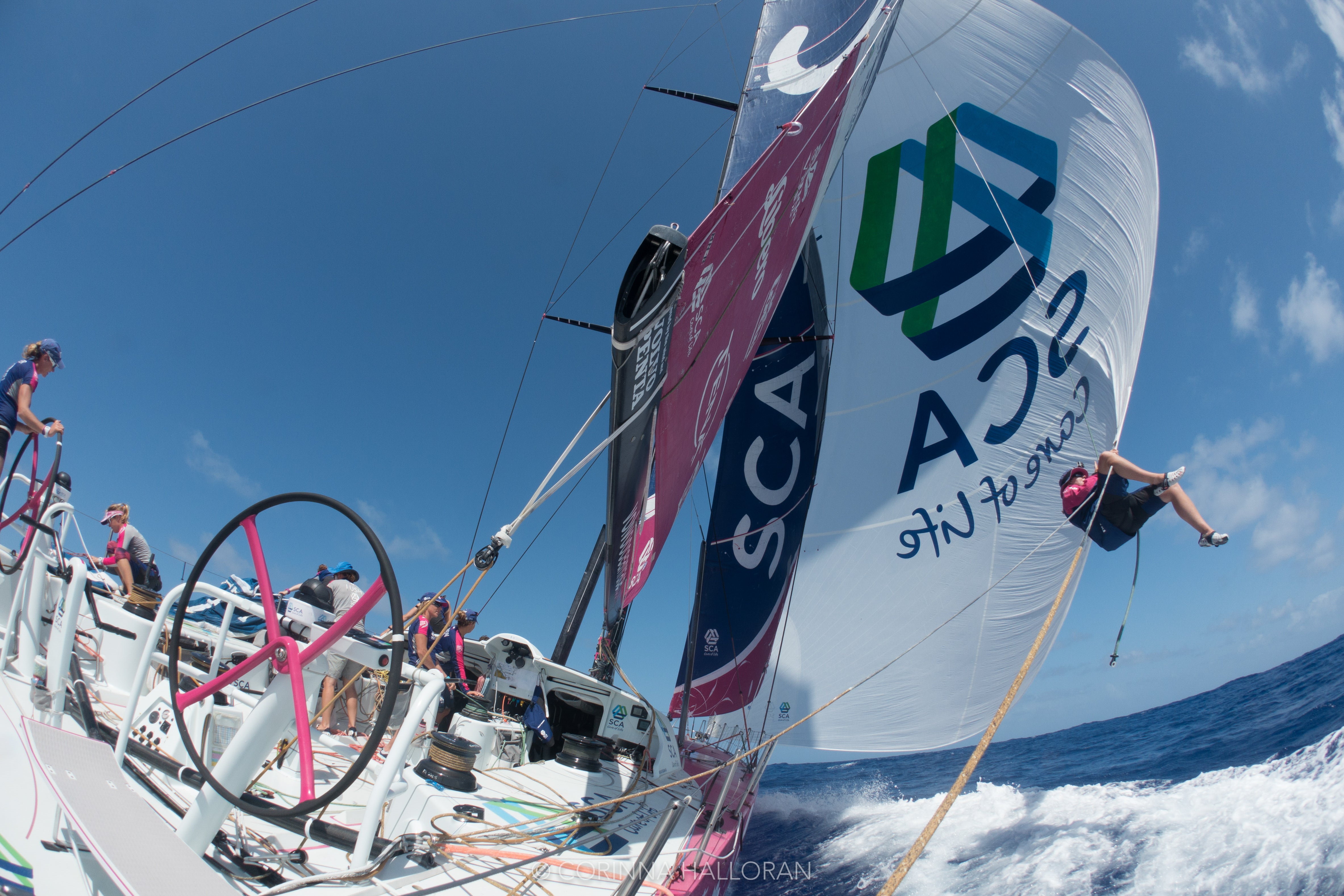 Stacey Jackson, one of the bow-women on board Team SCA, hangs above the water and changes the sheet on an asymmetric sail called the A3. 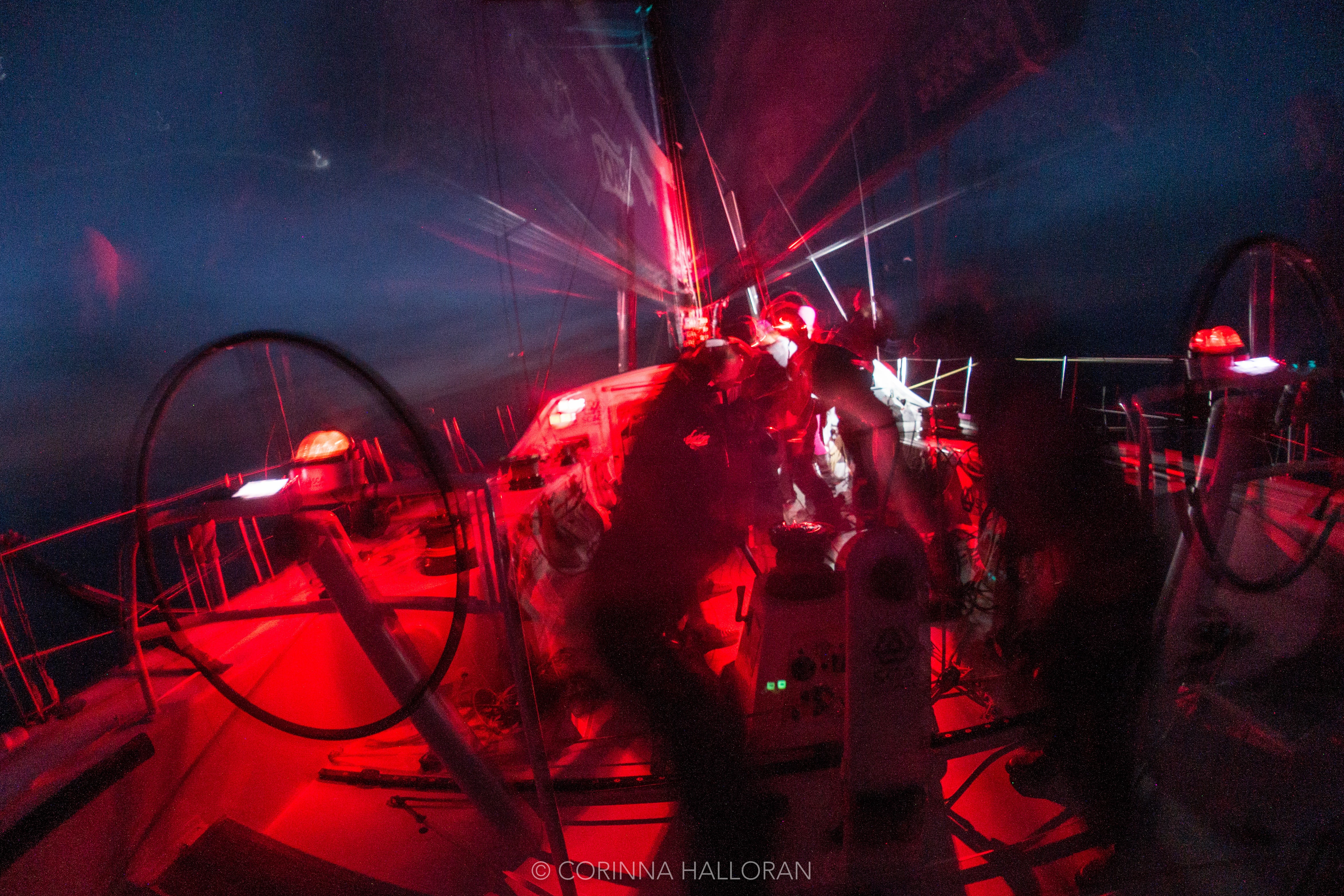 Racing the boat is non-stop, day and night. Here, Team SCA gybes the boat north on Leg 6 of the Volvo Ocean Race shortly after sunset. The crew uses red lights to help preserve their night vision.

Team SCA’s navigator was Libby Greenhalgh and she spent most of her waking hours with a cup of tea, starring at numbers at the computer, attempting to figure out how to make Team SCA race as fast as possible. In this photo, Libby Greenhalgh and Carolijn Brouwer watch the team's performance to determine when to tack. The romantic vision of a breeze and a star to sail by isn't gone, but in addition to a star hanging above the horizon, VOR sailors use a variety of high-tech satellite navigation systems to determine the best course. 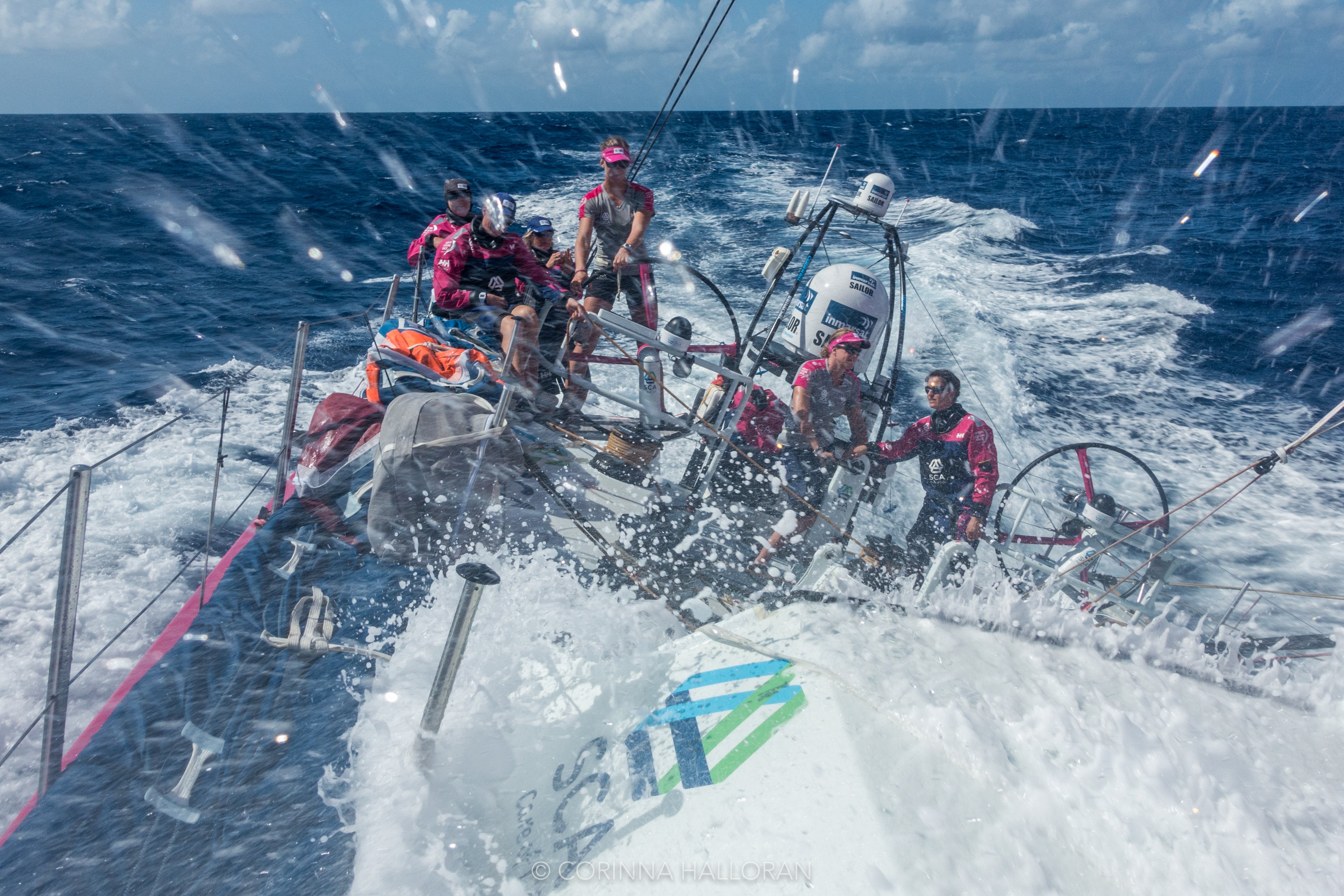 The Doldrums are a notoriously tricky place offshore; there are generally dangerous rain squalls that suck up all the wind. However, as Team SCA headed to Newport, RI on leg 6 from Itaji, Brazil there was loads of wind! The sea and the air was warm and waves crashed over the boat making everything fairly wet. These were unexpected conditions and ideal for racing. 'Welcome to the Doldrums?’ 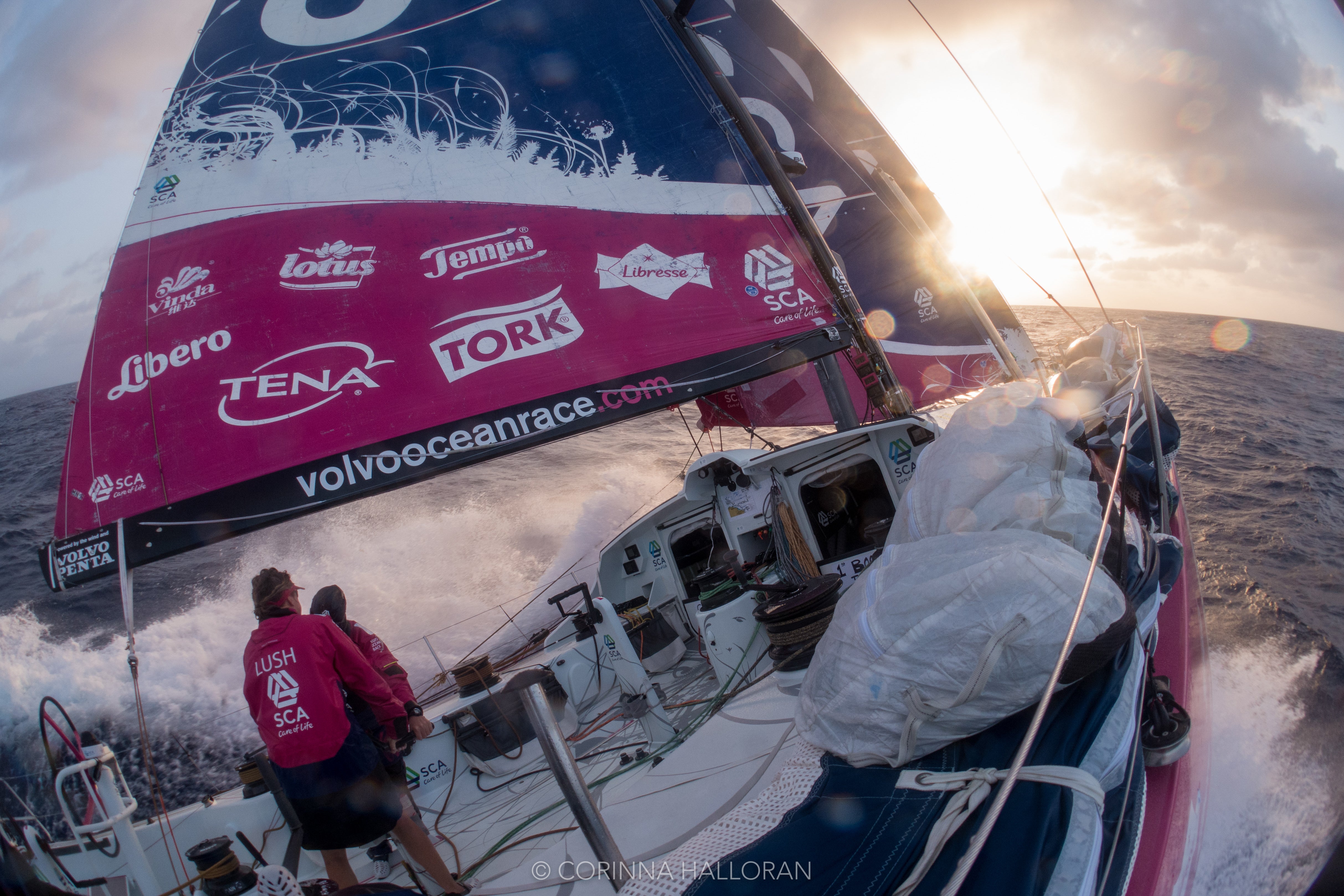 The sun sets on Team SCA as the team heads offshore hitting speeds of 25+kts. There's little time to enjoy the view as everyone takes advantage of the last light of day to look around the boat checking lines and remembering settings. 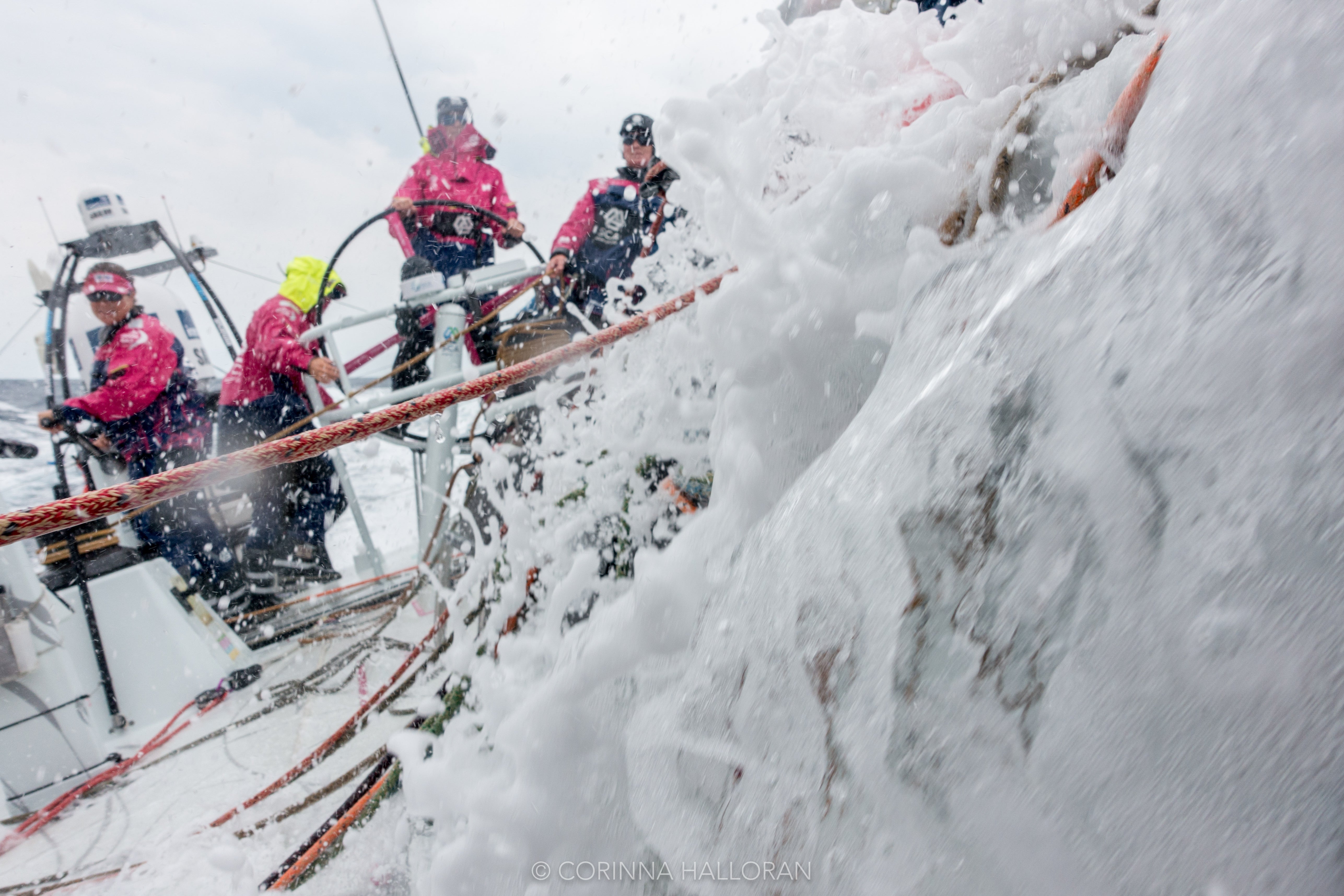 The last of the warm water crashes over the rail into Team SCA as the team heads out of the Gulf Stream.

You can see more of Corinna Halloran's photography at www.corinnahalloran.com.

Find out more about the Sony RX100 cameras at Sony.com.