Casara Moon (@casaramoon) is an adventure photographer based in Seattle. Moon spends most of her free time traveling to the mountains, oceans and deserts, where she captures the beauty of wild landscapes. Her images have a warm, gentle glow, creating a dreamlike mood throughout her photography. We had a chance to connect with Moon to hear all about how she captured this beautiful early morning with her Sony Alpha 7 II and Sony 70-200mm f/4 G lens. Read as she details her story behind the shot below. 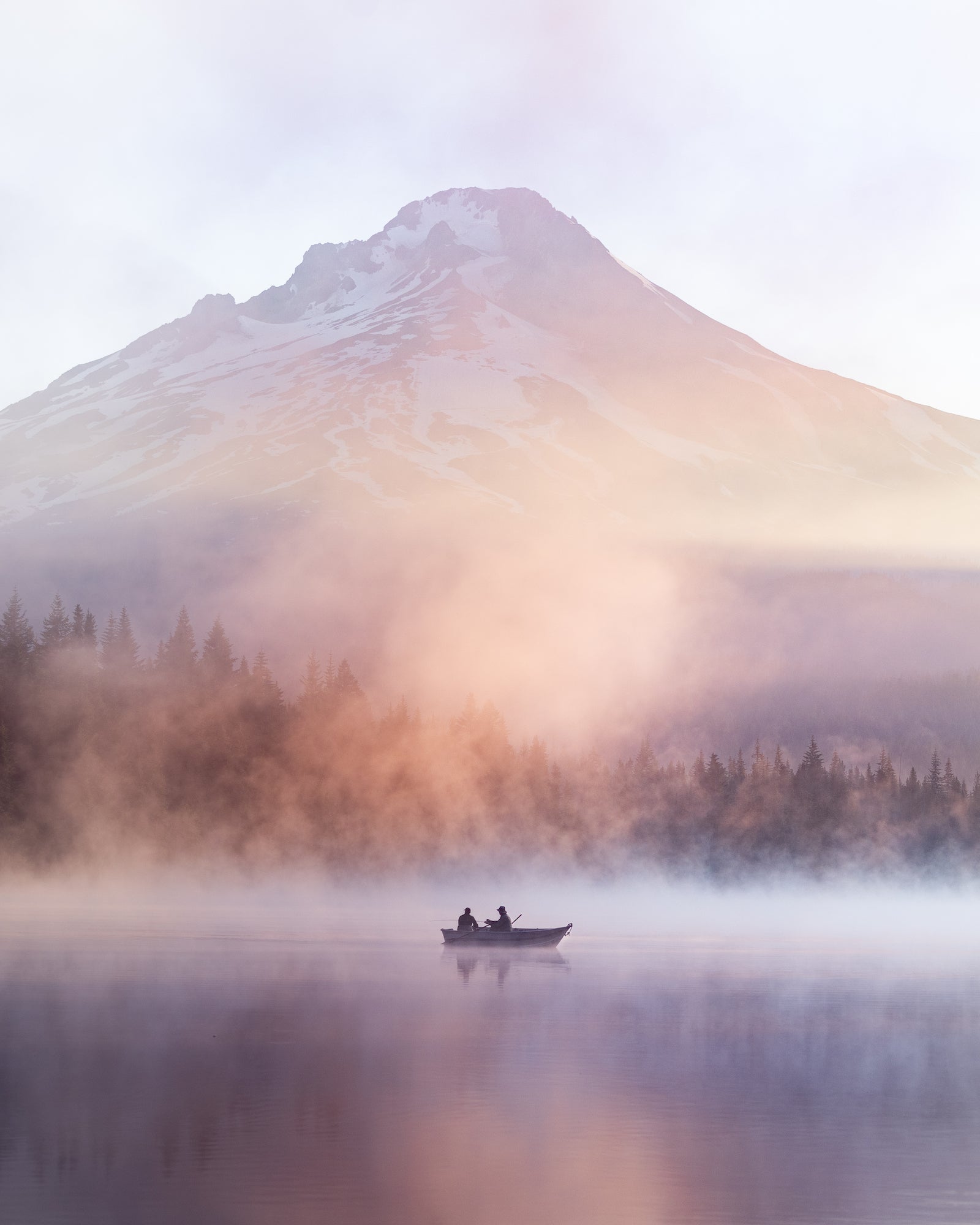 Over the summer, a close friend and I drove down to Oregon, hoping to explore and take some photos over the long weekend. We got to Trillium Lake in the dark and found a space to park in the free dispersed campground, and slept in the back of my car. We had an alarm set, so we had time to wake up and make it to the lake before sunrise. It's a quick drive, and you can park so close to the water's edge we didn't need to get up too early.

We grabbed our gear and joined the other photographers and a few fishermen scattered along the lake's edge. The sky was a light pink, and we could see the dark mist swirling over the lake. I had been to this lake a handful of times, and it's always beautiful during sunrise, but this morning I could tell it would be special. Quiet mornings like this put me in my happy place, outdoors, somewhere beautiful, camera in hand, just there for no other reason other than to enjoy myself and capture some photos. Some of my favorite conditions to shoot photos in are low fog and early with strong light, as I feel it can create the most magical moments, unlike what you would see on a typical day.

That particular morning didn't disappoint. As soon as the sunlight crested over the layers of trees, the lake was lit up in the most magical array of colors and light I had ever seen. The fishermen floated in and out of the fog, with Mount Hood towering over them. I had never seen a more beautiful scene in my life, and I was just so incredibly grateful to have been there in that moment to capture the shot.

I was shooting on my Sony Alpha 7 II camera body with my Sony 70-200mm f/4 G lens. I wanted to be able to compress the mountain even more behind the fishermen but still have the sharpness of the lake in focus, but not crop out the mountain. The Sony camera's ability to capture detail in low light allowed me to bring out the shadows in this photo while still keeping the highlights and focus intact. The raw image can come out looking a little dull, but the colors I could see with my eyes were there in the photo, and with just a little editing, I could pull those colors back out in full force.

My camera settings for this shot were 1/320-sec. shutter speed, f/5 aperture and ISO 100, shooting at 70mm to fully get the frame I wanted without cropping anything out. I never use my tripod, so I keep my shutter speed around 1/250-1/400 depending on what I'm shooting, and since the fog on the lake and the fishermen were moving around, I wanted to make sure they were kept in focus and didn't blur at all. I kept my ISO low to really capture the clarity of the image as I knew I could bring out the color and detail in the shadows since Sony's are so good in low light. I spent the morning around the same area, just enjoying my time and taking a bunch of photos, some more zoomed in, some wider, just to get a good assortment of images to choose from, but this one ended up being my favorite. The sheer scale of the mountain over the fishermen on the water was just perfect.

I put the RAW photos into Lightroom and picked the composition I liked the most, making sure it was the sharpest one. I only shoot single shot comps, so I do all of my edits in Lightroom, only ever going to Photoshop to remove any unwanted objects like lens spots. I checked to see if any of my personal saved presets would work on this photo, usually checking what colors it brings out, and then I started to edit.

Beginning with the basics in Lightroom, I add back the light into the shadows and dim the highlights, adding contrast and adjusting the white balance to get the hues I want. One of my main focuses while editing is keeping things natural but also bringing out that magical and dreamy essence that I was able to experience in person. I crop the image and make any necessary color adjustments. The last thing I do is to go in with the brush tool and pretend almost like I'm a painter and add back in very minor details in specific spots to really make the photo pop. With this shot, I darkened the boat, so the fisherman stood out. I also adding a stronger light glare on the side of their boat. I brushed over the fog, adding a little extra exposure and a little less saturation, as the color corrections made earlier had slightly colored the fog as well. Once I was satisfied with the colors and editing, I exported the photo to my desktop and Airdropped it to my phone to share.