I am a media designer, a visual artist and an art director, but most of the time I am simply a creative mind and an art enthusiast. My main aspiration is to increase the culture of visual design and to reach out to all kinds of people through the language of visual communication and storytelling. I like to explore the world around me by traveling with my camera in-hand. I always carry my camera set with me not to miss any opportunity to grab an exquisite composition. I mostly depict people in their surroundings or try to catch their connections to nature or to cities.

"This whole scene represents to me an intimate moment where worshipping people are becoming one with the water." – István Csekk, #BeTheWater Challenge

I like to think of myself as a visual reporter and adventurer. This time I was traveling to Indonesia to get inspiration from a different culture’s atmosphere, smells and colors. The picture was taken, during a tour of exploring Indonesian natural wonders, volcanos and the temples with the universal spiritual life inside. This temple was Pura Tirta Empul, meaning Holy Water Temple, and it’s one of Bali’s most holy temples dedicated to the Hindu God of Water, Vishnu. From year-to-year, thousands of tourists flood the pools to follow purifying ceremonies and pray. In their beliefs, bathing in holy waters may purify body and soul, and bring blessings. 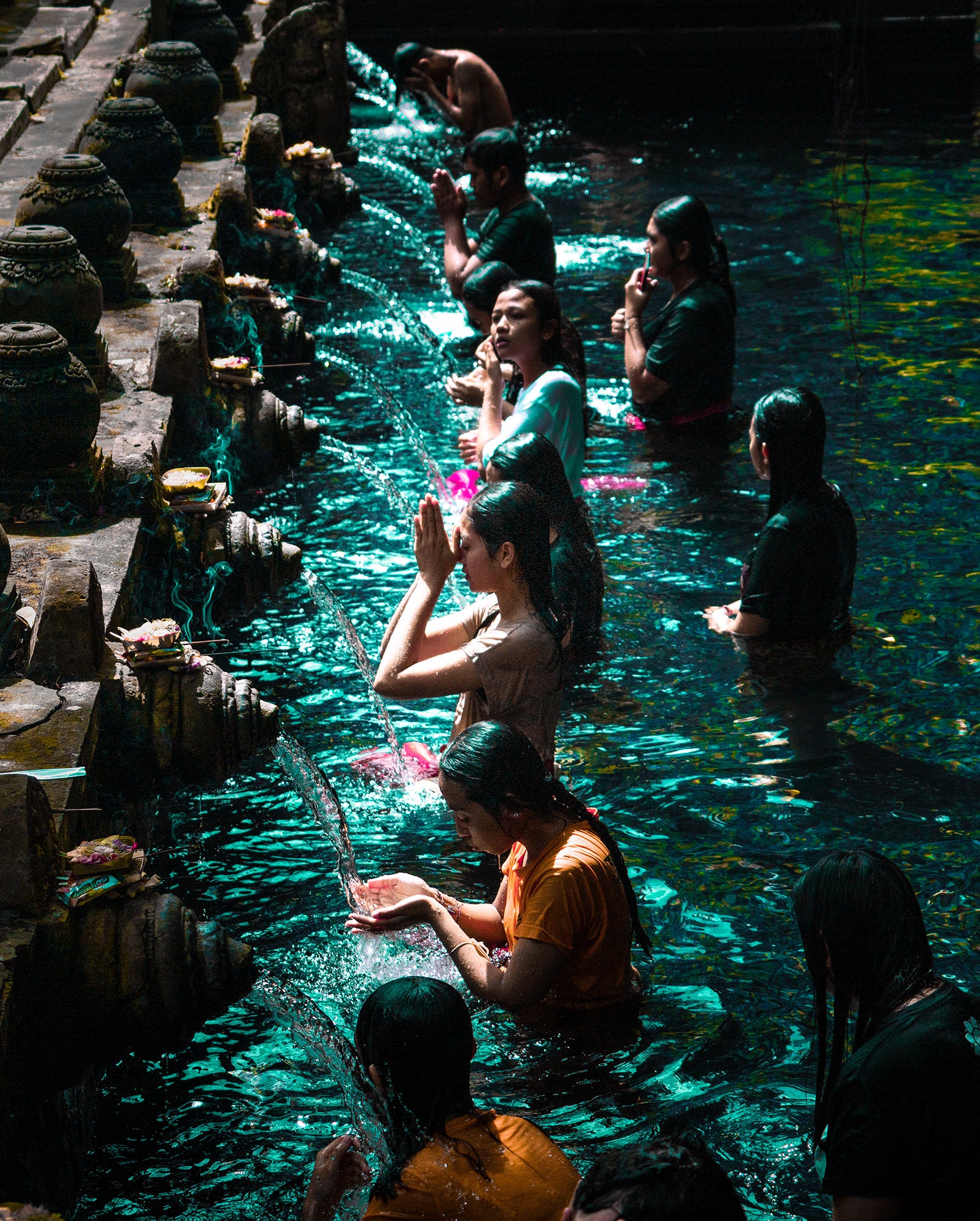 The temple is only approachable by tiny and steep roads, so getting there took more than an hour in the humid daylight. There were two pools connected to each other, with several wells pouring down the holy water, which symbolize the steps to be taken to purify the body and the soul. With the spot I chose for capturing the photo, I wanted to show the whole flow of the ceremony – to form in one composition the origin of the holy spring and the people in the line. I started the day with a sunrise photo shoot elsewhere, so by the time I reached Pura Tirta Empul it was sparkling sunshine at daytime.

Taking pictures in the daylight means most of the time that there are no dramatic lights at all. In this case, however, I had a perfect combination of shadows from trees and the sun reflecting into the water. If I take pictures in the daytime, I often underexpose the image to get the impeccable highlights and shadow combination. I walked around many times to get a glimpse of the atmosphere among the prayers, the scented sticks and the men hitting gongs. It was hard at first to find a unique spot. Searching for a composition, I found this angle where people and the water were in the best balance, showing their individual transformations while being in line with unknown others.

I used the Sony α7R II and Sony 24-240mm f/3.5-6.3 lens for this shot. The Sony α7R II is a perfect match for my creative process because I can use all the megapixels during my color correction process later on. The Sony 24-240mm f/3.5-6.3 lens helped me because when I saw the moment, I would not have had the time to change the lens. This lens was a perfect fit for me so that I could capture the scene while keeping distance from it.

I love to use the Sony α7R II and Sony 24-240mm f/3.5-6.3 because I am able to cover everything from wide-angle to telephoto in a single object. The camera and the lens complement each other thoroughly due to the in-body stabilization and the optical steady shot image stabilization for handheld shooting. The intercommunication between my Sony camera and Sony lens make it possible to tell the narratives behind my pictures quickly. I like to be a photographer who does not interfere with the stories I am about to tell when I am traveling because during my workdays, I always create strict scenes with all the details. In this special moment, I also needed to be fully respectful of the intimate scenario and keep distance.

I use my camera with a manual setting as I feel it gives me a bit more technical freedom. I leave white balance on auto because the sensors work perfectly to adjust it on each picture. Being around noon, I underexposed the image to get the impeccable highlights and shadow combination. With short exposure time, I could depict the drops of the water and the movement of people. With this setting, I could be sure that the picture is not blurred even when capturing a moving scene. I tend to use center focus setting in my camera to put highlights to the centre in my compositions.

Water is the most important element of Earth, our planet is 70% of water, as is our body. This whole scene represents to me an intimate moment where worshipping people are becoming one with the water. I had already this picture when I saw #BeTheWater challenge and thought that this narrative would perfectly match the hashtag.

Learn more about the photo challenge and how you can join today for your chance to be featured on AlphaUniverse.com.