Entertainment Weekly wrote, “there have been more than 48 million views on YouTube, thanks in large part to the pantheon of goddesses who pop up throughout…icons like Jennifer Lopez, Ellen DeGeneres, Gal Gadot, and Mary J. Blige… comedians Phoebe Robinson and Lilly Singh… activists Angy Rivera and Jackie Fielder…athletes Chloe Kim and Alex Morgan…and the heroic gymnast who inspired so many to speak their own truths: Aly Raisman. At a time when the world is primed for strong female role models, the video offers a who’s who of female empowerment.”

Claudio Miranda: The way Director David Dobkin conceived the shoot was to have actors coming in at different times but to make it feel like everyone was there at the same time. So, we decided to design it as a motion control round track shot.

We knew we had to get all these actors at different times, because they would never be available on the same day. It turned into a five-day non-consecutive shoot because of talent schedules. We plotted where everyone would go so they could interact with each other and the lead singer, Adam Levine. That was the theme. We shot Maroon 5 together as a band, Adam by himself, then over the following days, passes with Adam interacting with talent and finally the talent by themselves. Motion control was really the only viable option.

Jon Fauer: How did you hold deep focus?

Claudio: To hold the MoCo two shots, we used the Sony VENICE camera’s dual base ISO of 2500. I had a beta firmware of version 2 at the time. And I said, “Let's give it a go.” When we looked at the footage, we realized that this was something that could really work well. The added depth of field definitely helped get everyone into focus—close up and far away. But we still had to manually pull focus on every take.

Jon: The VENICE has a nice look at the high ISO rating.

Claudio: That was pretty surprisingly for me at 2500 ISO: no noise, and pretty clean. Even the people who did the roto had no issues at the 2500. It was funny because I wasn't going to shoot 2500. I thought T2.8 at 500 ISO would be fine. I usually like wide open, with a shallow depth of field, and I don't usually like shooting closed down. But it made sense for this piece. It was kind of a last minute decision. Dan Ming, my assistant, said it would be really handy to have more stop, since talent movement was unpredictable. At first, I said no. And then we dialed in the 2500 base ISO and tried it at a “heavy” T5.6 and it looked great.

For this piece, I didn't feel that shallow depth of field was helpful. We had band members in the background and we had to carry focus as we circled the talent. We talked about shooting full frame, but that was counterintuitive to the depth of field argument.

Jon: How does the higher base 2500 ISO manage to look so good, with so little noise?

Claudio: Well, the camera is native 500, but when you go to 2500 ISO it's a different mode entirely. It's not like you add gain on the camera. It is amazingly clean. So, it's super handy that you can flip the VENICE into 2500 ISO mode if you need it for anything, and then you have the eight stops of ND filters in-camera if you ever need them at the push of a button.

Jon: What lens did you use?

Claudio: We used a Super35 Master Prime for the greater depth of field. That’s another nice thing about VENICE: we could “window” the sensor for 16:9 aspect ratio in Super35 4K. As for viewing, we monitored the whole job in 4K on a Sony x300. We recorded to X-OCN ST, which is the high data rate Sony RAW file format. 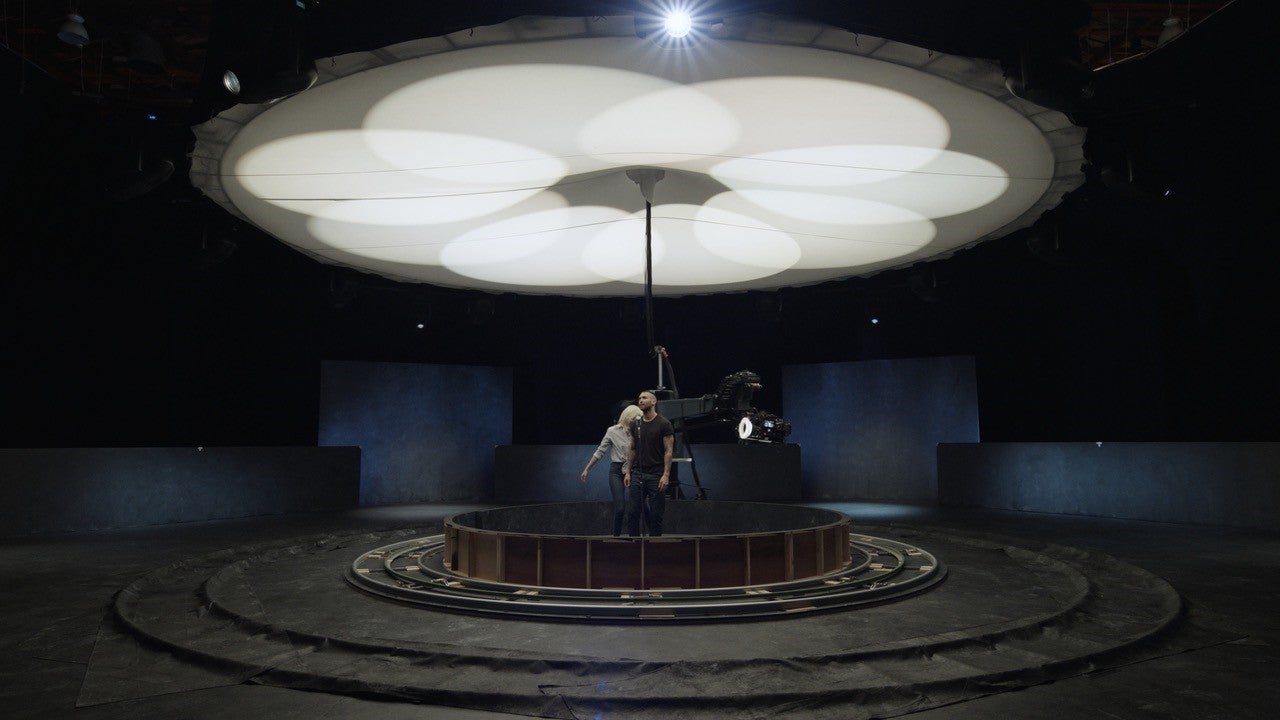 Jon: What Motion Control rig did you use for the circular move?

Claudio: Pacific Motion Control supplied the motion control “dolly” rig, head, equipment and track. Craig Shumard is the owner/motion control tech. Once programmed, it became pretty simple for the talent. They just did two or three takes, because no one really had that much time.

I operated the initial move and they recorded it. That was the basis of the camera movement throughout the whole 4 ½ minutes for everything except Cardi B, which was kind of her own thing. What was challenging was when we had to break down the MoCo rig and set it up again and match the move when we had down days between talent availability.

Jon: Once your AC had focus centered on the subject, was it pretty easy to keep everything in focus during the take?

Claudio: No, it was not super easy. Every pass was manually focused. Some of the actresses played to the lens. Others really went a little bit crazy—gawking into the lens or really slamming up to the camera and then quickly moving away. We only had the talent for a short time. That was a reason why it was beneficial for the 2500 ASA and extra depth of field. We had to pull focus for all 250 takes- the distance ranged from 18 feet to as close as 20 inches, depending on what the talent did.

Jon: How were some of the people removed in post when there was an overlap?

Claudio: There was a bunch of roto to remove things and individualize each actress.

Jon: How did you do the lighting?

Claudio: I had a lighting rig built. I didn't want to front light everyone all the time. The lighting rig let us change from front to backlight, and it also helped with the transitions as each actress entered or exited frame. The lights were programmed as part of the motion control with dimming, fading and moving. Everything—lighting, dimmer board and camera movement—was being driven off time code.

Just like the MoCo rig, because it was not shot on consecutive days, because of talent availability, the hard part was that we actually had to tear the set down and dismantle the rig each time, and then rebuild it all for another day when someone else could come in.

Jon: What kind of lighting fixtures were in your overhead rig?

Claudio: We had 8 movers — moving lights. They panned across the overhead muslin. Imagine a 40-foot diameter muslin over the top of the set, centered on the nodal point of our circular move. I had the eight movers pan around the muslin, so it would be front, back or side light. Sometimes the light was confined to a certain area, like a single 4-foot or 6-foot circle.

The lights were rigged on top and coming from overhead through the muslin. I wasn't bouncing. The key light would sometimes go counter to the MoCo move at times. At other times, very briefly, it would open up to eight big circles that looked like a flower with eight petals. And then the lights would concentrate into a sourcier back or front light. It worked in a kind of cool, slightly complicated way of doing things.

Jon: It looks more interesting than most 360 degree circular shots.

Claudio: I had a little ring light as well that we 3D-printed to slide on a Master Prime. Sometimes I would operate it by hand depending on how close the talent was coming up to the camera. And I could dial the ring light up or down as an extra fill, or anti-fill if we didn’t want to reveal too much.

Jon: The shot towards the end where all the women are in the same shot, and you're still circling around, were they all isolated and combined in post?

Claudio: That's right, that's why everything is Motion Control. They had to do a lot of roto around the people. There was no blue screen. It was a regular background.