Mark Fulinara won 1st Place in the 2016 Sony World Photography Awards National Competition for the USA for his photo of a falling kickboxer. Fulinara is a kickboxer himself and his deep understanding of the sport gives him a natural ability to be in the right place at the right time to capture peak action and decisive moments. Knowing the sport you’re photographing is essential.

Kickboxing takes place in challenging but predictable environments. It’s indoors, usually under harsh, high-contrast lighting and it’s within a confined space (the ring). Also the photographers are restricted in where they can position themselves. The rhythm within the ring is measured and steady (as the fighters move and watch for their moment) punctuated by instants of ridiculously-fast action as they strike. In short, like boxing and mixed martial arts, photographing kick boxing isn’t as easy as pointing and pressing the button.

When we first spoke with Fulinara we learned that he’s been a Sony α7R II shooter for some time. We were curious about how he sets up the camera to shoot in the difficult conditions in the arena. Fulinara describes how he photographs kickboxing, but his approach goes far beyond the square circle.

Fulinara takes it from here: 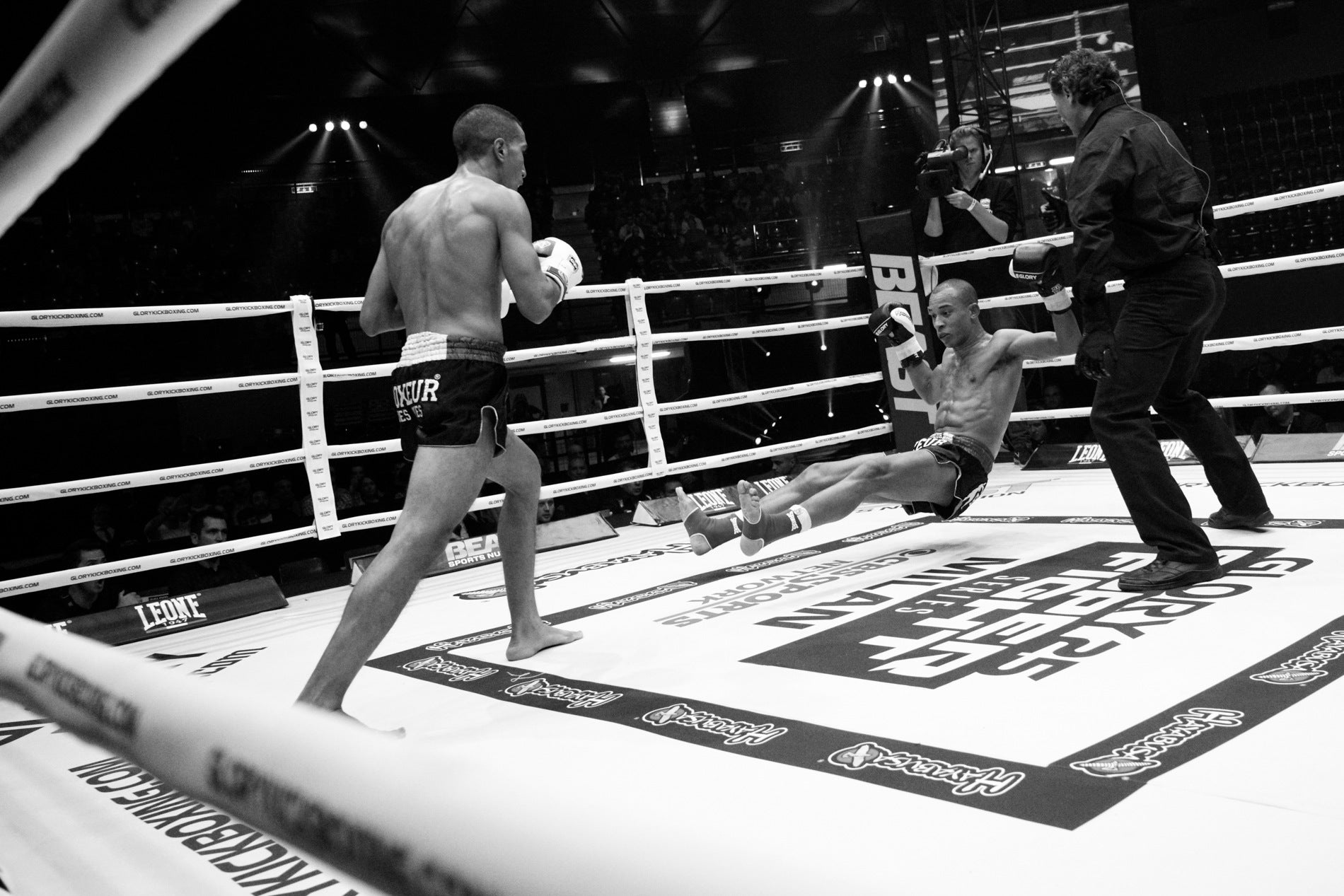 I shoot exclusively in JPEG when it comes to combat sports photography. Both in the interest of buffer speeds while burst shooting, and so as not to kill my hard drive space. Drives are cheaper, but they still aren't cheap! I definitely think that when shooting fights, telling the story of what happened takes priority over technical elements like dynamic range or other advantages of shooting RAW. There's an ebb and flow to a fight, and you need your camera to ready and not be buffering while the action unfolds.

I also think that the 'benefits' of shooting RAW are a hindrance for me in post because I feel obligated to squeeze every little bit of potential out of every RAW file. A JPEG is more or less what it is, and I like the way my Sony cameras process JPEGs anyway. My camera is a better editor than I am.

Event organizers and press need their photos immediately after each fight to post on their websites and social media, so you need to be streamlined and work as quickly as possible. The ability to use WiFi to move photos onto my phone is pretty clutch too. I got published in an Italian newspaper because I was able to quickly download a photo I took of soccer player Mario Balotelli and email it to a reporter on the spot, before he left the venue.

Turn off image review for two reasons: One, on a mirrorless camera, my EVF is a live preview. Two, I can stay more in the moment if I’m not constantly checking up on my work. In fact, I turn off the LCD screen altogether and work solely from the viewfinder which also saves a little bit of battery life.

I shoot in Shutter Priority mode for both cameras, usually at 1/800-sec or faster. I could go fullly manual to get better exposures and keep my ISO as low as possible, but there's more going on during a fight than just the fighting. Very often, I've got to turn my attention away from the ring to maybe a corner-man or the crowd reaction and those people aren't under the same bright lights of the ring. If I have one more setting to fiddle with, that's one more opportunity I could miss. If I turn away to, say, a celebrity in the crowd, I just flip over to Aperture Priority mode, get my aperture wide open, then flip back to Shutter Priority when I turn back to the fight.

Brightly lit subjects in a ring with a completely dark background and bright lights overhead can confuse the auto exposure settings of any camera depending on where you point, but I find that the photos from the α7R II and α7S still look great at high ISOs so I don't worry about it too much. Again, my priority is telling the story more than worrying about things like noise. The 'Falling Kickboxer' shot actually comes from a burst that vary from ISO 6400 to 12800, all at 1/1250-sec and they're all pretty close in overall image quality. That’s pretty crazy to think about when you compare that type of performance to cameras of even just a few years ago. We're spoiled now and I take full advantage!

Here are a couple of really big details for me, customizing the C1 & C2 buttons. I customize C1 to be able to quickly turn silent shutter on and off. There are just some situations so close and intimate going on backstage that you really don't want to annoy the fighters and coaches with any shutter noise at all. At the last show I went to, a fighter got angry with the referee and stormed out of the ring, disqualifying himself. I followed him and his team all the way to the backstage dressing room and tried to stay just close enough that I could get some shots without the fighter angrily punching me (he's actually a really nice guy, so I doubt that would have happened). I set the C2 button to turn image stabilization on and off. As cool a feature as that is, it drains my battery life when I leave it on. When I’m ringside shooting things at 1/800-sec or faster, I usually don’t need the in-camera stabilization. 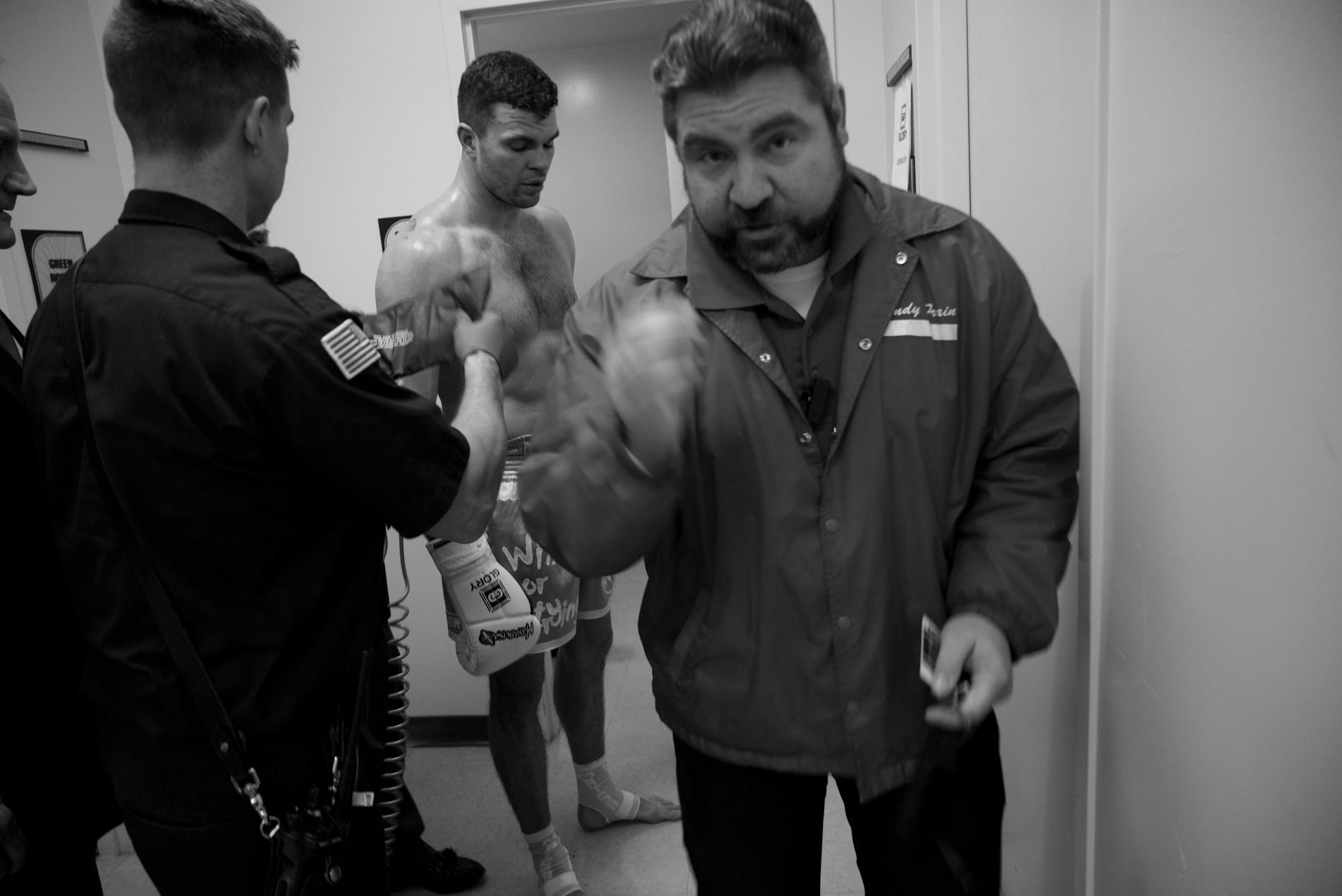 Moments after an angry fighter storms out of a ring and is disqualified. To add insult to injury, his locker room was locked so we all had to stand in a hallway while paramedics took his blood pressure. This was definitely a good time to have a silent shutter. Sony α7S, Sony Vario-Tessar T* FE 24-70mm f/4 ZA OSS. 1/60-sec., f/4, ISO 1250

A lot of photographers like to stick their lenses beyond the ropes because ropes do make autofocusing difficult. I actually like to use ropes in the foreground for an added geometric element. Maybe it's slightly masochistic, but it's more fun to struggle with that type of thing and it adds a little bit of context to the photo. It gets even more difficult when I’m shooting fighters in a cage.

When I'm photographing things other than the fighting, I like to use the center spot, lock my autofocus, recompose, then take a single photo. I've never liked cropping. When it comes to photographing the fighting, the fighters are doing their best not to stay in place, so I center them up to get my focus, shoot, and 'recompose' when I crop. It's not my preferred method, but when I have 42 megapixels to play with it works out and it has opened my mind up to the power of cropping.

My main philosophy to shooting is always to ask, "What’s the story? How should I tell it?" Maybe sometimes being wide open with a razor-thin depth of field isn't the best way to show that a fighter depends on a whole team of people literally and figuratively standing behind him or her. 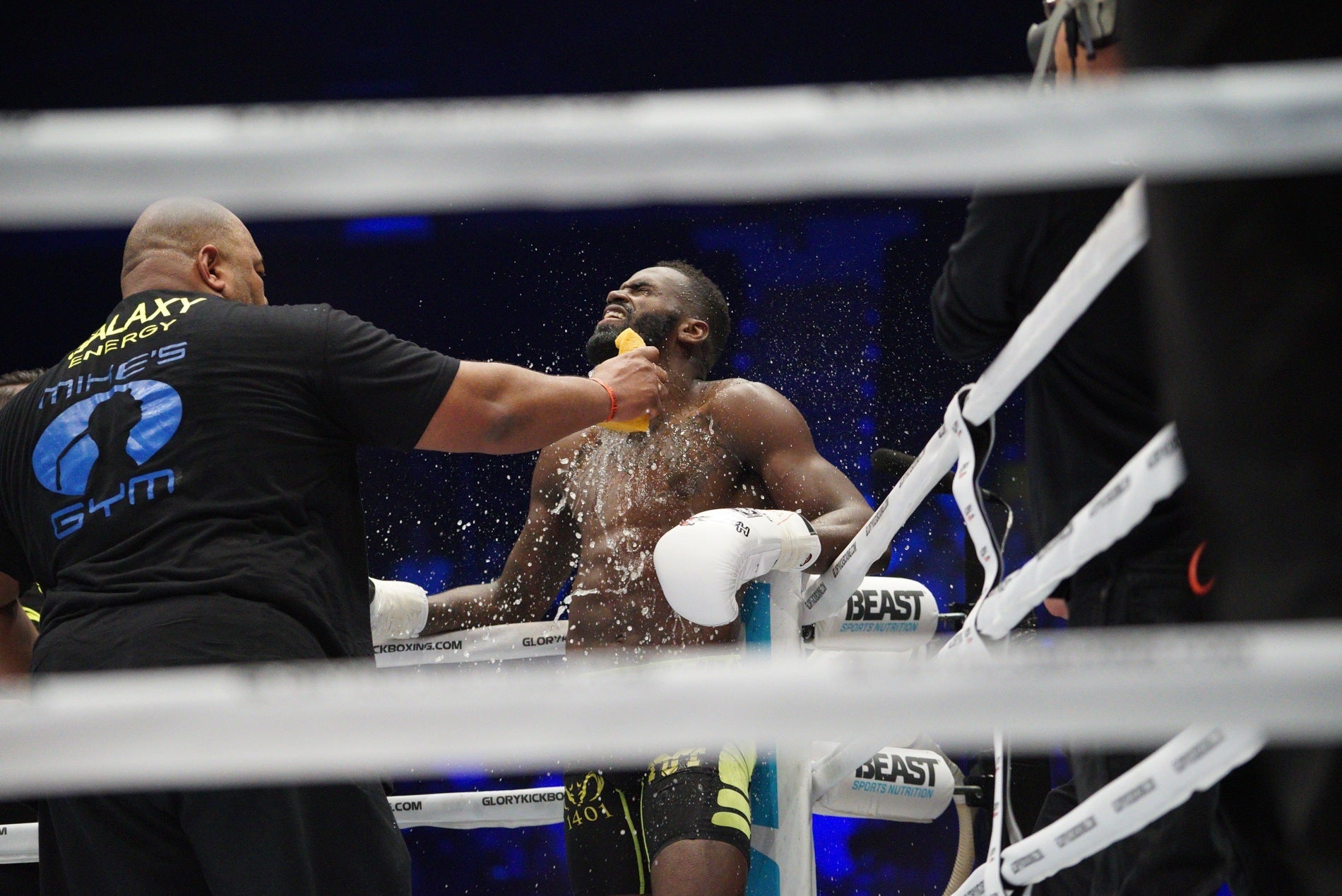 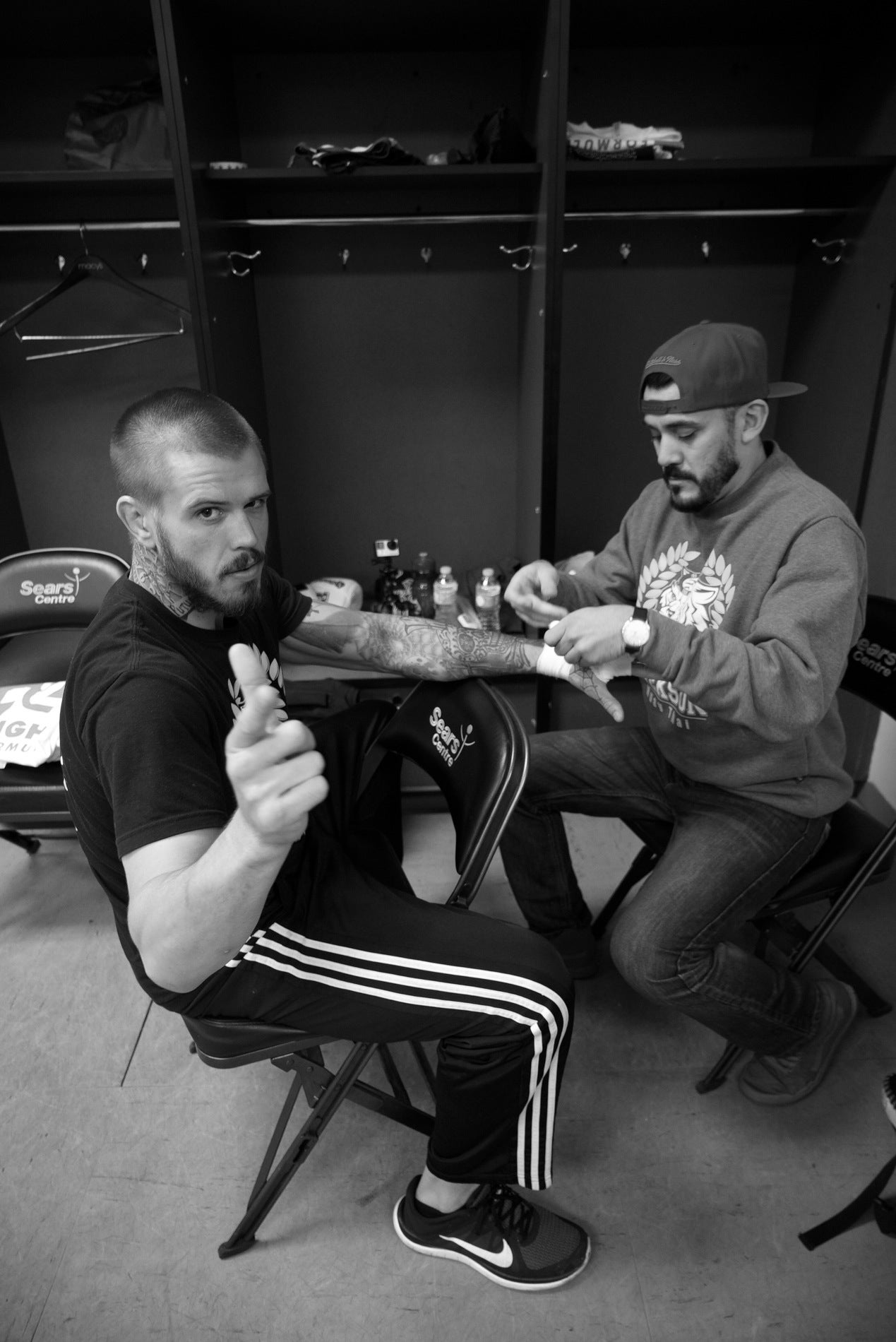 How You Can Get Started

If you want to shoot this kind of combat photography, I think one of the best things you can do for yourself is to find your local martial arts gym and start training. I only started photographing fights in the last year or so, but I think having trained most of my life (and really just a lot of luck) has helped me tremendously. I understand how fighters move which helps me guess when they're about to do something, and I understand the rules well so I know what's 'important' to a match beyond just the punching. When you’re working with fight organizations that bring in the best talent from around the world, everybody isn't going to speak english, so smiling and understanding how people from different places and fighting styles greet each other helps you speak the universal language of martial arts.