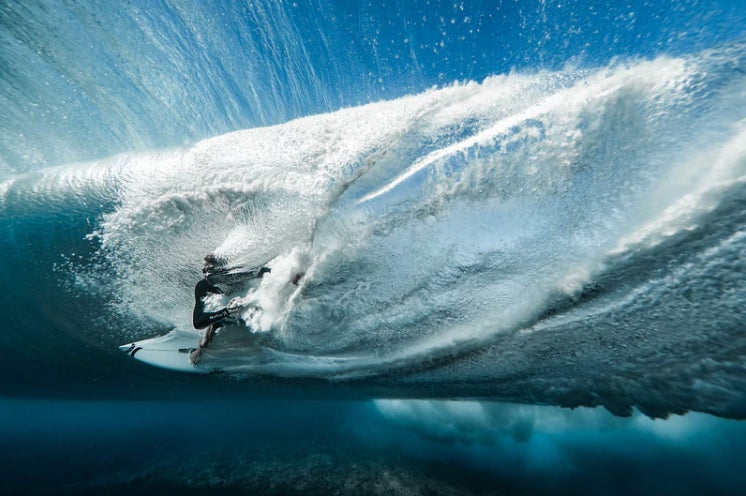 Every image tells a story, and here’s Ben’s story behind the shot:

“I‘ve dedicated the last few years to shooting underwater, looking for new angles and a new way to shoot surfing and waves. Shooting surfing from underwater is a whole new world and I love it!

“Tahiti has some of the clearest water in the world so it was easy for me to take advantage of it and explore it as much as I could.

“This photo was shot during a freesurf session right before the WCT event in Teahupo‘o. This is Ace Buchan kicking out from the barrel through the wave, a technique to escape a close-out wave.

“Luckily I was right below, breathless with my waterhousing waiting for this moment and I was able to capture the whole sequence of it; this frame from the beginning of the sequence is the most powerful one because of the water around his face and body.”

See the full press release below:

The world’s greatest action and adventure photographers from every side of the world gathered at 2,275m / 7.464 ft. high in the LUMEN – Museum of Mountain Potography in Italy on November, 20 to celebrate the Red Bull Illume Image Quest 2019. The Overall Winner, 11 Category Winners, and Top 60 finalist images were unveiled at the Winner Award Ceremony by the host Zoran Filicic.

Taking home the grand title of Overall Winner this year is Ben Thouard with his mind-bending underwater image of athlete Ace Buchan surfing in Teahupo’o, Tahiti, in French Polynesia. His winning image received an outstanding number of votes by the judging panel, which consisted of 50 excellent photo editors and digital experts.Once the big announcements concluded all the award-winning photographers had the opportunity to see their images on display, illuminated on 2mx2m lightboxes at the opening of the Red Bull Illume Exhibit Tour 2019 outside of the LUMEN. All the way from the top of the mountain, the exhibition will travel down into the magical valley of Bruneck, South Tyrol, Italy. Parallel to that, the exhibition will be held at the unique architectural work of art – Hangar-7, Salzburg, Austria.

The photos exhibited will be the Top 60 images, which will include the 11 Category Winners and the Overall Winner. The winners are:

That’s not all! This year’s partners SanDisk and Salewa each had their own trophy to give away. The first ever recipient of the SankDisk Extreme trophy is Philip Platzer, Austria. The next trophy, presented by Salewa, was for Best Mountain Sports Image which was awarded to Kamil Sustiak, Australia.

The category winners and the overall winner were not only awarded with massive trophies but also took home their share of incredible prizes including cameras from Sony, storage solution bundles from SanDisk and the complete Skylum Photo Editing suite including Luminar 4. In addition, COOPH, Salewa, Petzl and SUNNYBAG provided the winners with apparel and equipment every photographer needs.

All of these and more in one collectible hardcover book. The Limited Edition Red Bull Illume Photobook features 260 of the most unforgettable action and adventure sports image submitted to the Image Quest 2019. The Photobook is out now and there are only 4,000 copies available, each individually numbered and stamped, including a SanDisk Ultra SD Memory Card with the Moving Image Category videos and the full Luminar 4: Creative Photo Editor suite. At the rate they were selling at the Winner Award Ceremony, we’d suggest you order your photobook on redbullillume.com/book today before they’re all sold out!

Red Bull Illume is the world’s greatest adventure and action sports imagery contest. It showcases the most creative and captivating images on the planet, while illuminating the passion, lifestyle and culture behind the photographers that shoot them.

The Image Quest 2019 was the fifth edition and has evolved with two exciting new categories; Best of Instagram by SanDisk and the Moving Image category. The Best of Instagram by SanDisk submissions closed on June 14, 2019, and the five monthly winners have already been announced; while entries for the Moving Image category and the other nine categories of the main contest were open until July 31, 2019. Photographers could all submit their best images on redbullillume.com.

In 2019, a record-breaking 59,551 images were submitted by thousands of photographers with entries from all around the world.

A judging panel of 50 photo editors and digital experts have selected the 60 Finalists, 11 Category Winners and 1 Overall Winner, which were unveiled at the Winner Award Ceremony at the LUMEN - Museum of Mountain Photography, Plan de Corones, Italy on November 20, 2019. After the unveiling, all finalist images travel to capitals and cultural hubs on three continents in parallel on the Red Bull Illume Exhibit Tour – an unprecedented level of exposure.

Along with the global partners, Salewa, the daring mountain sports equipment manufacturer, Petzl, producer of innovative headlamps for outdoor enthusiasts and SUNNYBAG, manufacturer of environmentally friendly solar panels for charging on the go, also joined as partners for the Winner Award Ceremony 2019.