Reaffirming Sony’s commitment to produce industry leading A-mount cameras, the impressive new camera combines the best of many of their latest digital imaging innovations including a new Hybrid Phase Detection AF system with exclusive Sony A-mount features such as Translucent Mirror Technology™. The result is a supremely specified, professional level camera that will be appealing to a variety of professional and enthusiast photographers.

“We are continuing to innovate with each new camera body, lens and accessory that we bring to market, offering compelling choices to both existing and prospective users of the Sony α system” said Neal Manowitz, Vice President of Digital Imaging at Sony Electronics. “With the α99 II, we’re delivering an industry-leading level of performance to A-mount owners and enthusiasts. Its powerful combination of speed and resolution is simply unmatched in today’s market.” 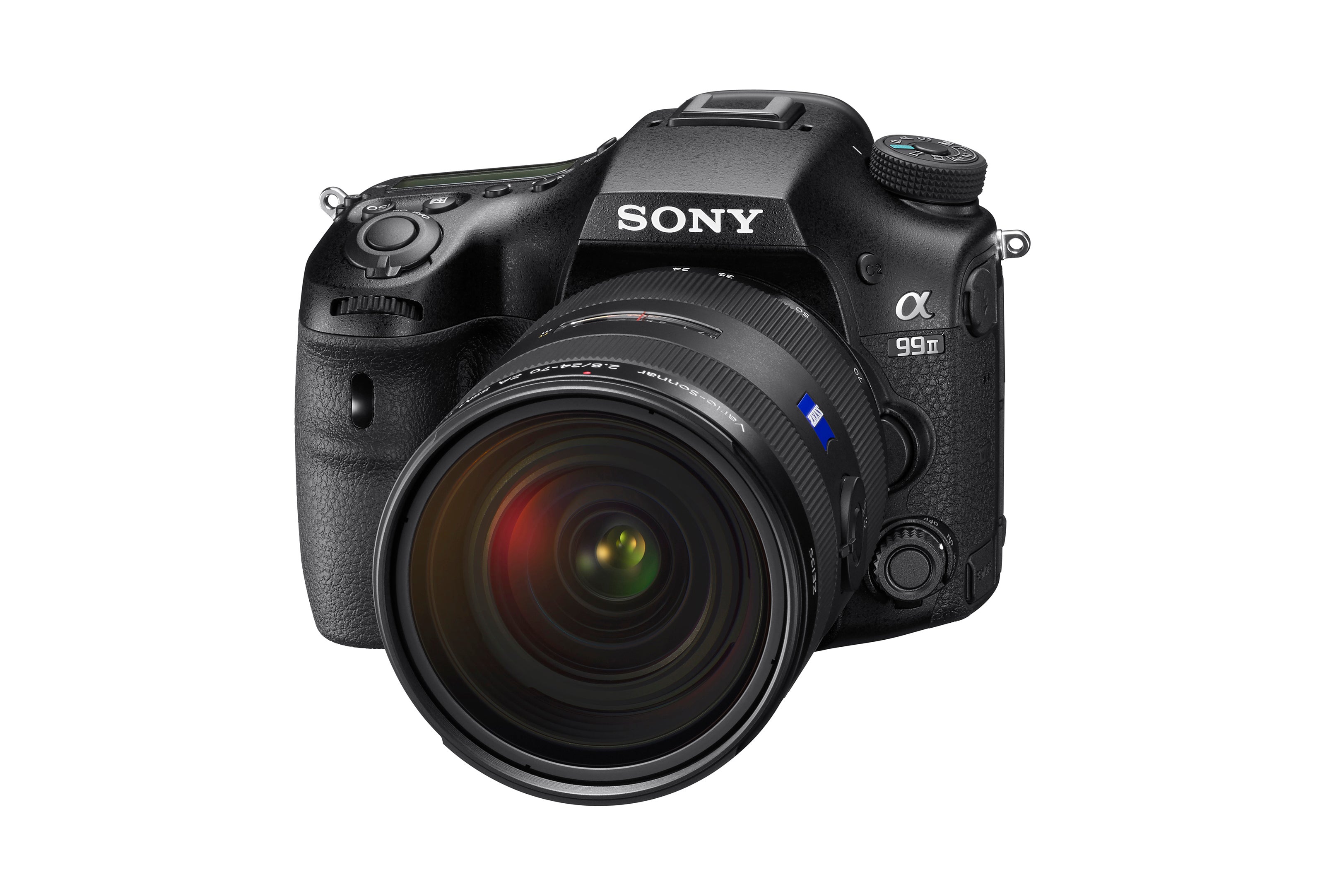 In addition to its advanced autofocusing, the α99 II has been designed to allow for high resolution, continuous shooting at high frame rates. The camera features a new front-end LSI that works with the image sensor, BIONZ X® image processing engine and a newly designed shutter unit to enable continuous shooting at impressive speeds of up to 12fps with AF/AE tracking. Thanks to a large buffer, these shots can be viewed immediately after shooting, even when in high-speed continuous shooting mode. Additionally, if these high-speed shots are being taken indoors under artificial lighting, the camera can automatically detect flicker and time the shutter accordingly to minimize its effect on the resulting images.

The new α99 II also has the ability to deliver continuous live shooting at up to 8 fps with AF/AE tracking and minimal display lag thanks to overall improvements in the EVF algorithm. This offers photographers a shooting experience that closely mimics that of an optical viewfinder, while still offering all of the benefits of an electronic viewfinder including a live preview of exposure, white balance and several other camera settings. This continuous live view shooting can be set in 3 stages to match a variety of subjects: 8 fps, 6 fps and 4 fps. 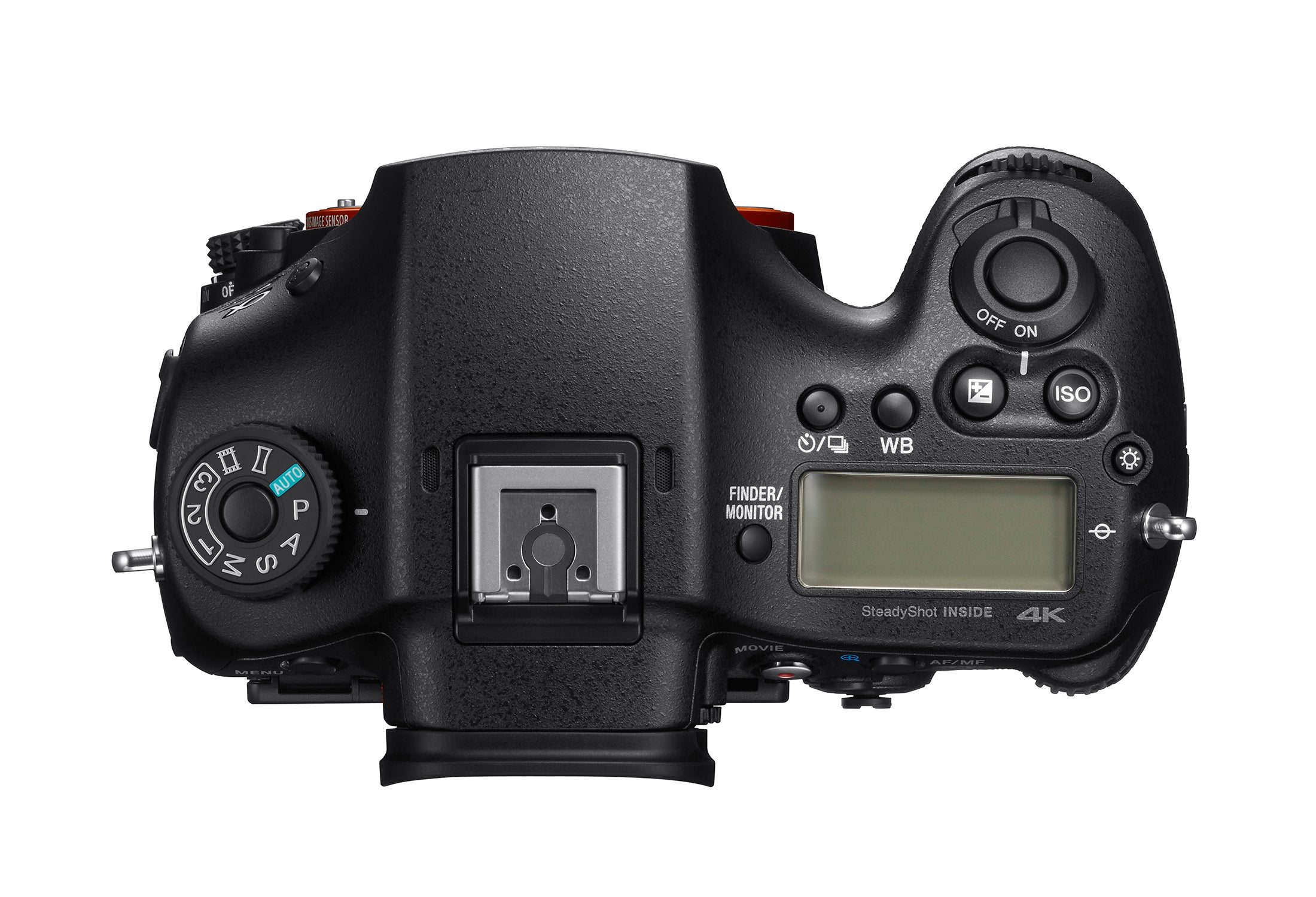 The new camera has also been designed without an optical low-pass filter, ensuring that all of the finest natural details and textures can be captured with unprecedented depth and realism. Both compressed and uncompressed RAW files are readily available based on user preferences.

Sony has designed a new in-body 5 axis image stabilization system for A-mount cameras that debuts for the first time in the α99 II model. Having proven to be incredibly popular in the ɑ7 II series of cameras, this five axis system effectively detects and compensates for movement in all axes including X and Y, pitch and yaw and camera roll, and ensures that all captured content is crisp and blur-free. The new stabilization system provides a shutter speed advantage of 4.5 steps, ensuring the full potential of the 42.4MP sensor can be realized. Also, with a simple half press of the shutter button, the effect of this the image stabilization can be monitored in the viewfinder or on the LCD screen, allowing framing and focus to be accurately checked and continually monitored. 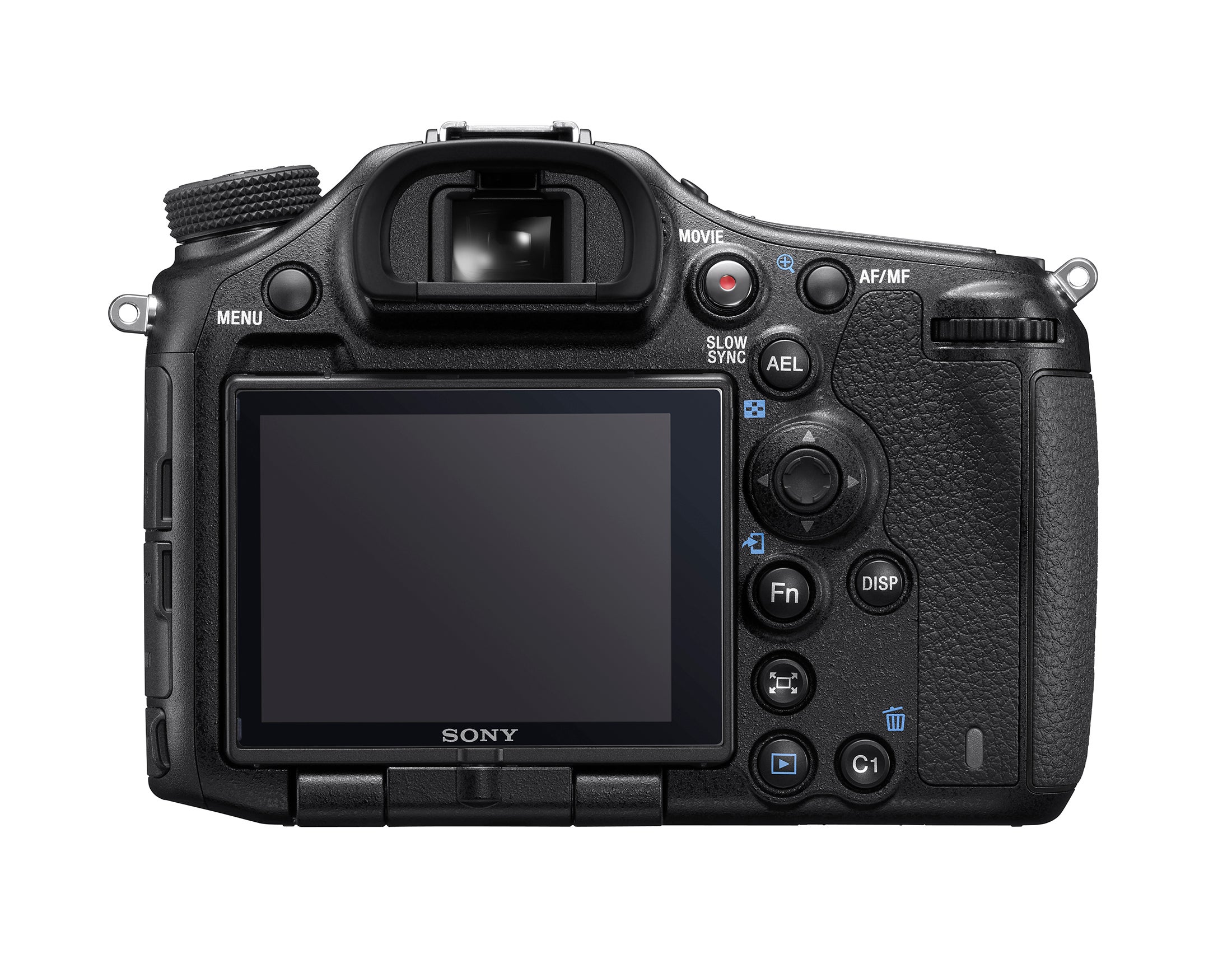 Based upon feedback from professional users, the design of new α99 II has noticeably evolved compared to its predecessor. The new model is 8% smaller than the original ɑ99 and features a newly designed grip, magnesium alloy body, dual SD card slots and dust and moisture resistance.

The α99 II also features a new shutter unit that has an estimated life of more than 300,000 operations, as well as an XGA OLED Tru-finder with a ZEISS® T* Coating that offers a powerful 0.78x magnification and delivers outstanding clarify from corner to corner. The viewfinder also has a fluorine coating on the outer lens to prevent fingerprints, dust, water, oil and dirt from sticking, ensuring a clear view.

The silent Multi Controller introduced in the original ɑ99 has been improved as well, as it now offers a click-stop ON/OFF switch in addition to allowing control of aperture, shutter speed, ISO, exposure compensation, AF area, AF mode and other settings. The α99 II also offers location data acquisition via a Bluetooth connection to a compatible mobile device and an updated menu structure to deliver a smoother navigational experience.

For the first time in a Sony A-mount camera, the α99 II has the ability to record 4K video internally16 with full pixel readout and no pixel binning through usage of the professional friendly XAVC S format. The camera is capable of recording high quality footage at 100Mbps for 4K recording, and utilizing the full width of the large, full-frame image sensor in doing so.

It also offers a new ‘Slow and Quick’ mode (S&Q) that supports both slow motion and quick motion. In this mode, frame rates from 1 fps to 120 fps can be selected in 8 steps for up to 60x quick motion and 5x slow motion recording.

A host of other features for professional movie production workflow are also included in the α99 II such as picture profiles, time code and clean HDMI output as well as gamma assist for real time S-Log monitoring and a zebra mode for easier exposure adjustment. S-Log3 and S-Log2 gamma are both included as well.

The Sony α99 II full-frame interchangeable lens camera will ship this November to authorized Sony retailers throughout North America and will be sold for about $3,200 US and $4,000 CA.

For a more detailed outline of the new α99 II interchangeable lens camera including product specifications, please visit its dedicated product page on Sony.com at the following link – Sony α99 II homepage. There is also a variety of content on the Sony Camera Channel on YouTube and the Sony Photo Gallery.

A variety of exclusive stories and exciting new content shot with Sony α products can be found at www.alphauniverse.com, Sony’s community site built to educate, inspire and showcase all fans and customers of the Sony α brand.