Summer and fall are great times to get outside, hike and make photos of breathtaking landscapes. Some people take this to the next level with backpack trips and even thru hiking adventures. From the Pacific Crest Trail to the Appalachian Trail, many thru hikers are vlogging and documenting their journeys. And with the challenge to go ultra-light, these vloggers choose Sony to keep their packs light and their video quality high. Check out these YouTubers for inspiration, tips and tricks on vlogging in the backcountry and don't forget to subscribe to the Alpha Universe YouTube Channel.

With the challenge to go ultra-light, these vloggers choose Sony to keep their packs light and their video quality high.

While not a thru-hiker himself, Sony Alpha Collective member Nate Luebbe is a fantastic outdoor adventure photographer, filmmaker, and YouTuber. Luebbe’s channel is perfect for anyone looking to learn more about creating adventure films. In the video below he walks through what gear he brings for extended backpacking trips. His go-to camera is the Sony Alpha 1 and Sony Alpha 7S III and the Sony lenses depend on the situation he’ll be in and the weight.

Renee Hahnel is a travel photographer and blogger and a member of the Sony Alpha Collective. Her channel is all about her travels and outdoor adventures, including hiking, backpacking, and road trips in her camper van. Subscribe to her channel for a taste of van life, outdoor adventures, and some gorgeous video footage.

Jeff Oliver is a long-distance hiker and photographer. He’s spent the past four years thru hiking the Appalachian Trail, Pacific Crest Trail, and Continental Divide Trail and vlogging his experiences on the Sony Alpha 7 III. While hiking the trails, Oliver developed a passion for photographing landscapes, wildlife, and nature. With so many miles under his belt, Oliver has a lot of knowledge and advice to share on his channel.

Elina Osborne is a filmmaker based in Auckland, New Zealand. Osborne has thru-hiked the Pacific Crest Trail and she vlogged her entire journey. Hiking for months on end requires carrying all your equipment, so Osborne made her videos with the lightweight Sony Alpha 7S II and the Sony 35mm f/1.8. Since that epic trip, she’s done other crazy long hikes and vlogged those adventures as well. Check out her full film overviewing her experience on the Pacific Crest Trail!

Timmy Lodhi is a filmmaker based out of San Francisco with an emphasis on outdoor travel films, music videos, and documentaries. His YouTube channel is a mixture of short films and tutorials. We love the video below of his backpacking trip in Yosemite Shot on the Sony Alpha 7 III with the Sony 24-105mm f/4 G lens. The beautifully shot piece feels like you’re out there with him, taking a deep breath in nature. He describes it by stating, “this video is an ode to those moments and a reminder to live every day like it's the last.” 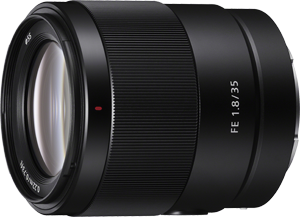