On the night of the new moon, the darkest night of the month, a group of friends and I trekked to Lassen Volcanic National Park in California for a Milky Way photography adventure. Sony was good enough to loan me a case of cameras and lenses for my friends and I to try out over a couple weeks and I had been taking small groups out to test out the gear. This overnight trip to Lassen ended up being with three other friends and I. We met up before sunset and started shooting shortly after nightfall. We took photos until around 4:00 AM, chasing the Milky Way as it made its way across summer night sky.

Night photography like this doesn't have to be complicated. Fast lenses and having a camera that can handle high ISO really helps. To keep the stars from streaking, set a shutter speed of less than 30 seconds. The Milky Way is a great subject for wide-angle lenses. On a dark night like this one, the Milky Way stretches from the horizon to high in the sky, and using a wide-angle lets you include interesting foreground elements that add to the photo. Using wide angles, you can often shoot with your aperture wide open and still be sharp from the foreground all the way to the stars. Then just set the ISO where it needs to be and use a sturdy tripod. Experiment and review the images on the camera's LCD as you shoot to get yourself dialed in. 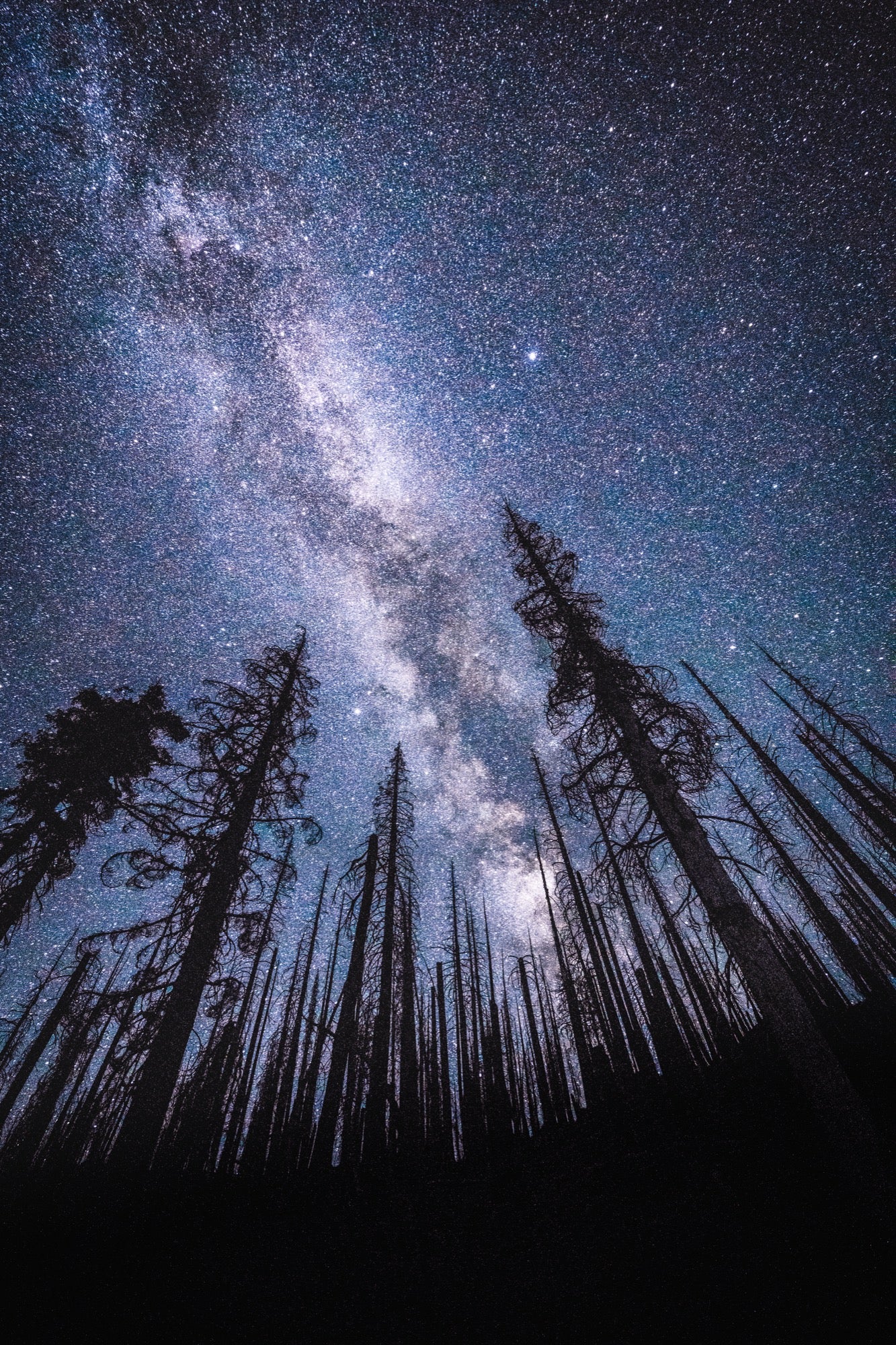 Photo by Andrew Eggers (@andreweggers). Sony α7R II. Sony 16-35mm f/4 lens at 16mm. 25-seconds, f/4, ISO 10,000.
This is my favorite photo from the trip. I was shooting with the Sony 16-35mm f/4 lens at 16 mm. The exposure was 25-seconds at f/4 and ISO 10,000. Because it was so dark without any moonlight, I pushed the ISO way up to get as much out of the Milky Way as possible. The air was still so there’s no motion blur in the trees, but even if there had been, this shot would have worked. I showed this photo to my friend and fellow Sony shooter, John Bevel (@jbbevel), right after taking it and he said, “Reaching for the stars” in reference to how the trees appear to be outstretched. 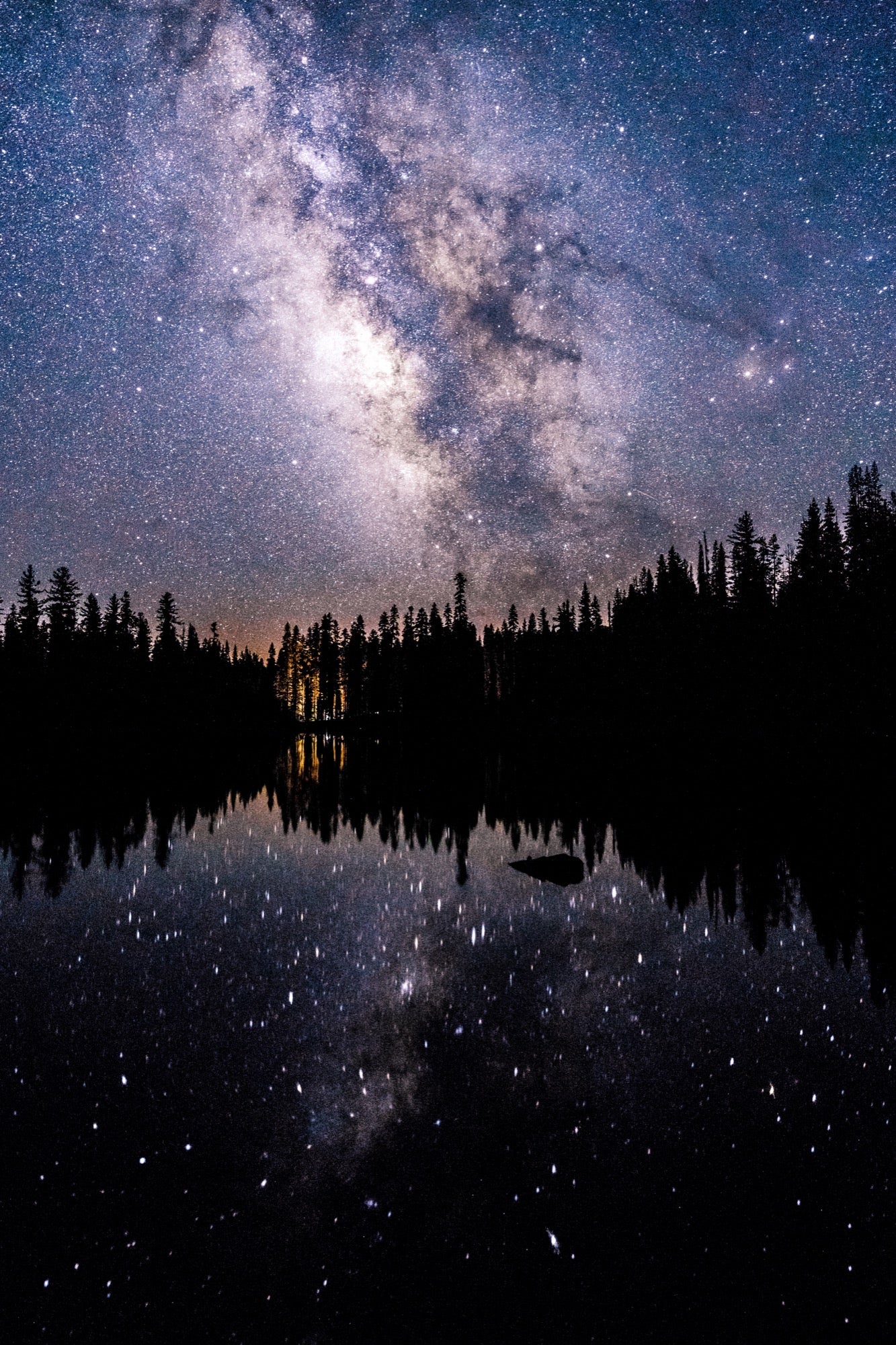 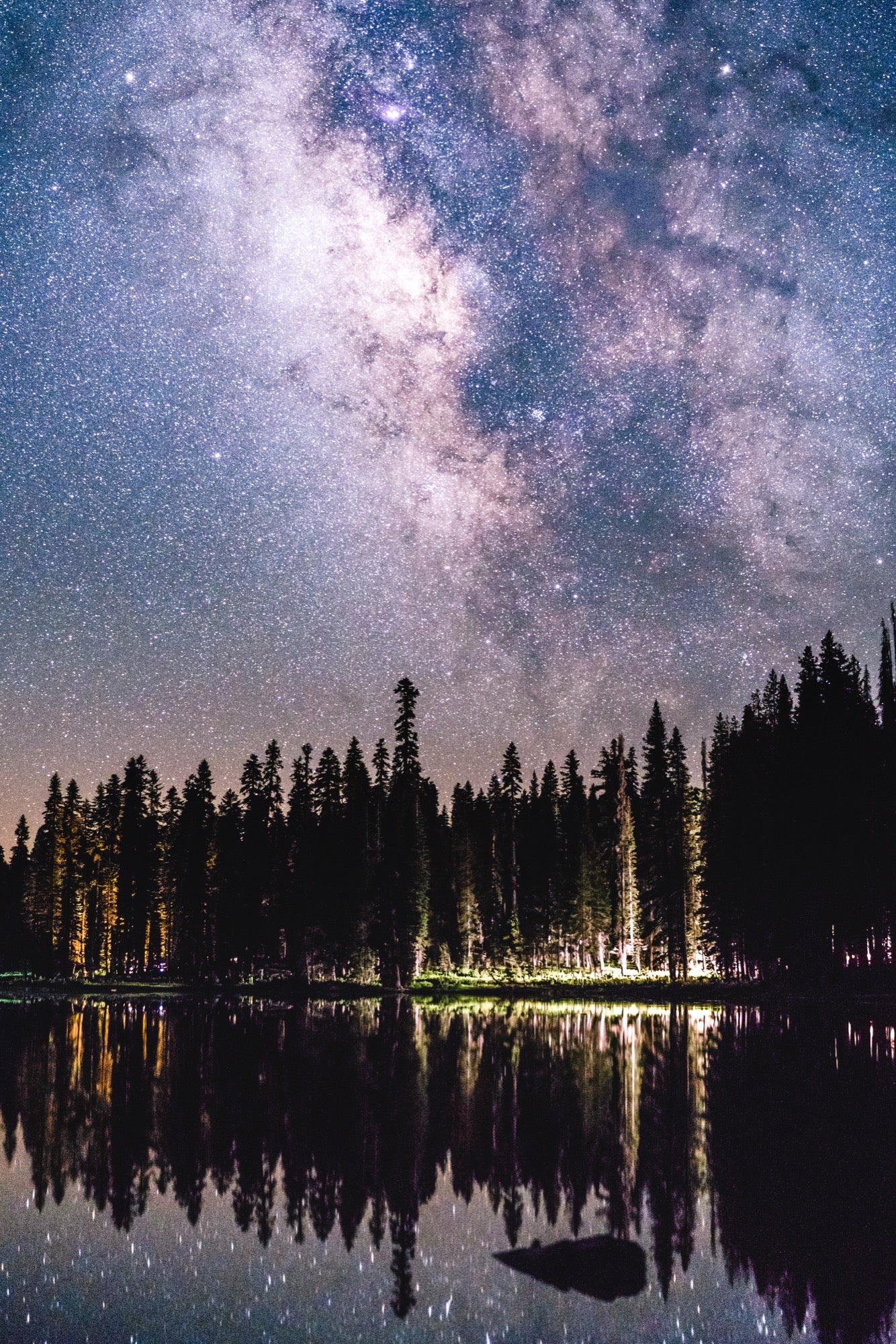 Photo by Andrew Eggers (@andreweggers). Sony α7R II. Sony 50mm f/1.4 lens. 8-seconds, f/2.0, ISO 6,400.
Here’s a closer look at the same scene, but this time shot with the Sony 50 mm f/1.4 lens at 8-seconds, f/2.0 and ISO 6,400. I love the visual you get with this ‘zoomed-in’ look with the Milky Way looking larger than life. The light you see is from car headlights in the lower right part of the photo as someone was driving down to their campsite, which I think really helped accentuate the reflection. 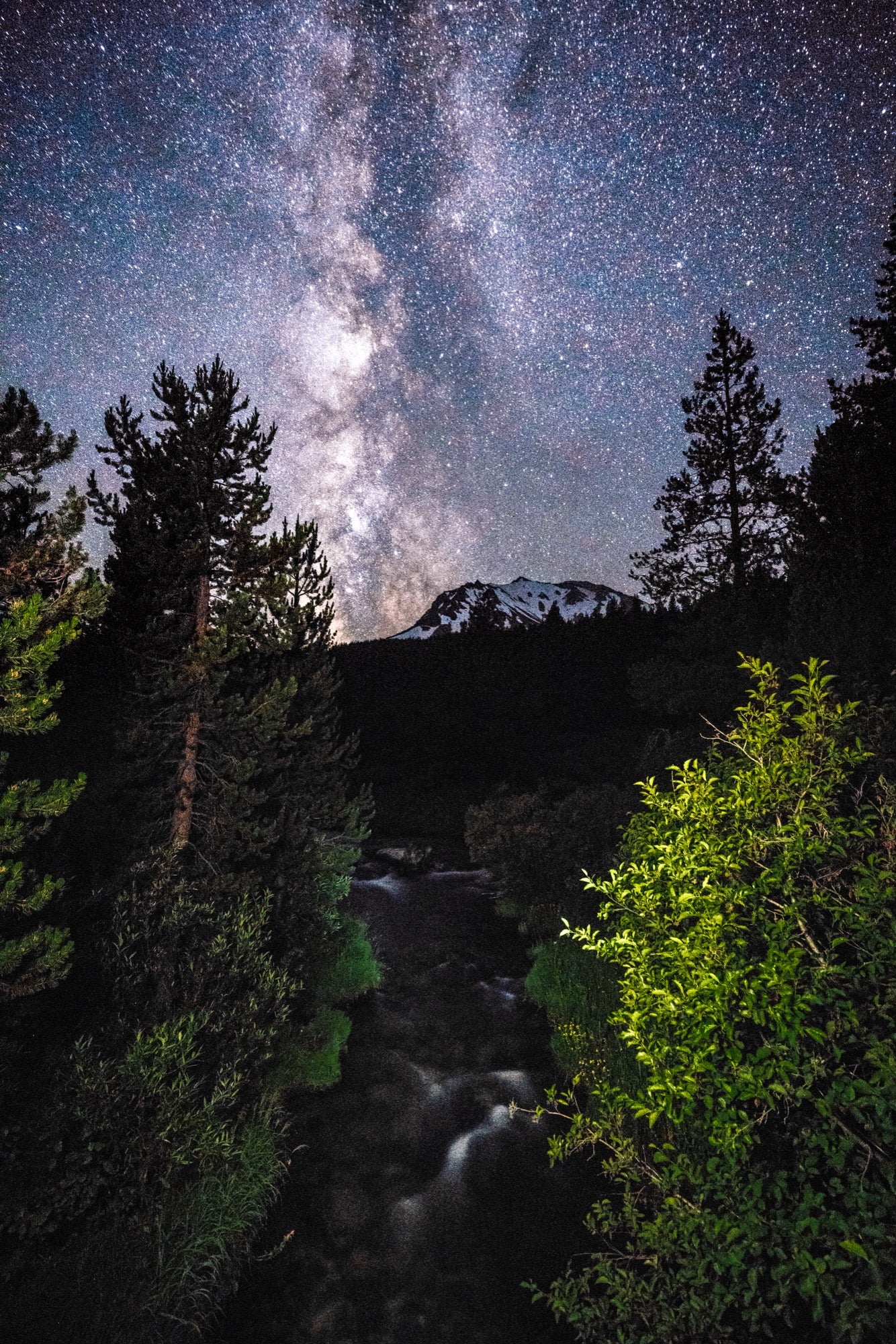 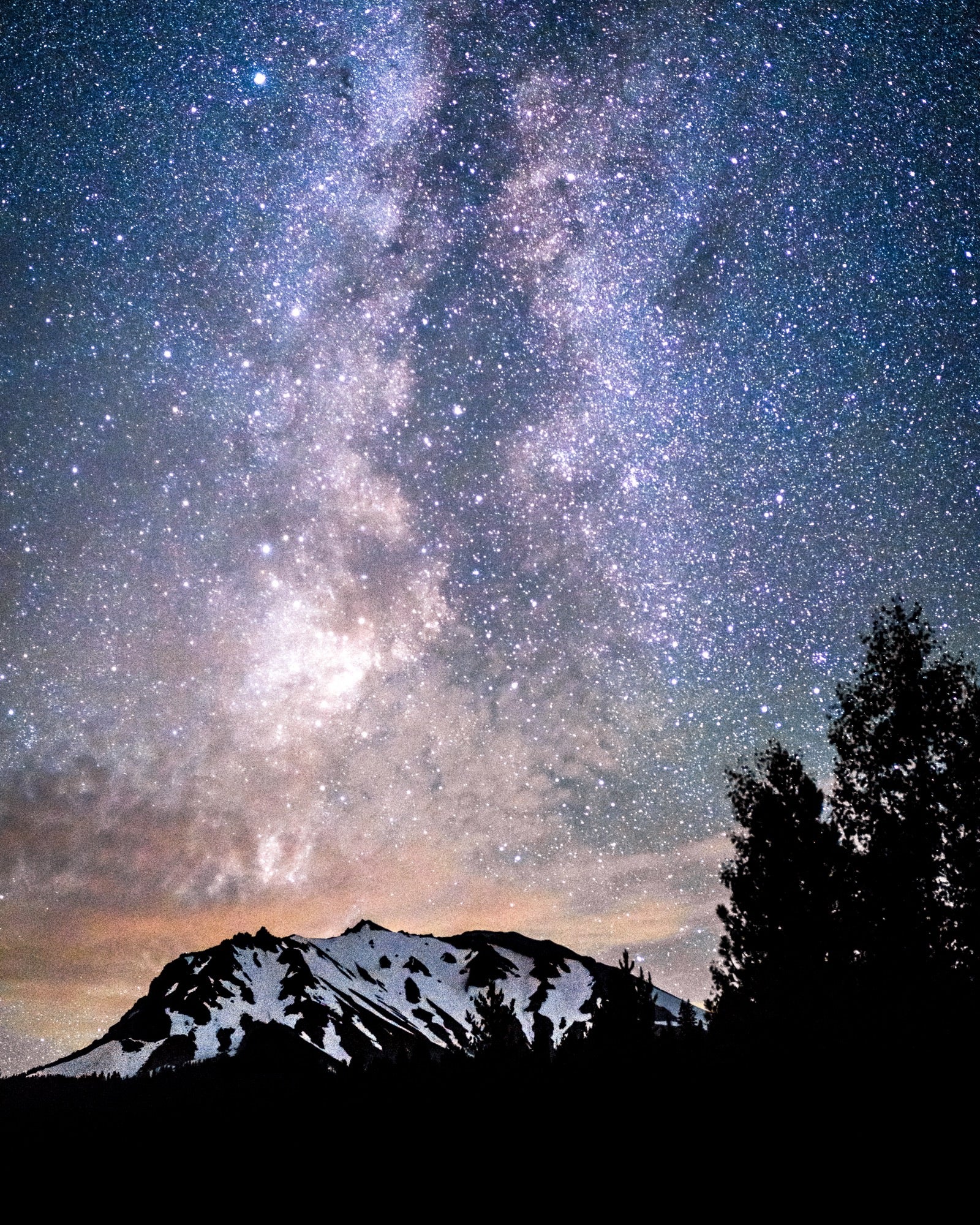 Photo by Andrew Eggers (@andreweggers). Sony α7R II. Sony 35mm f/1.4 lens. 8-seconds, f/1.4, ISO 5,000.
This was one of the final shots taken that night and you can see the low clouds creeping above Mount Lassen and below the Milky Way core. I used the Sony 35mm f/1.4 lens at 8-seconds and f/1.4 at ISO 5,000 and attempted a minimalist look with the mountain and trees being cropped towards the bottom. The 35mm is a great lens for the Milky Way, in my opinion, and I love the fact that you can get a bigger, more defined core while also being able to fit so much of the scene into the frame.

This trip was amazing in so many ways from the great company to the awesome location and having the right gear to shoot with. A big thanks to Sony for making that happen.

Andrew Eggers is a member of the Sony Alpha Imaging Collective. Follow all of his adventures on Instagram @andreweggers.

How to Process the Milky Way using Adobe Lightroom CC

How to Process the Milky Way using Adobe Lightroom CC