Note: Members of the Alpha Imaging Collective paired up with Artisans Don Smith and Gary Hart to explore the landscapes of New Zealand’s South Island for #AICdoesNewZealand. Here Gary Hart shares some of the top photo spots in the area.

In 1995 I stayed two weeks in the country outside Christchurch on New Zealand’s South Island. I found the New Zealand countryside so beautiful that I carried a camera on my daily seven-mile sunrise run. So when I started doing photo workshops about 10 years later, I knew if I ever added international workshops, New Zealand is where I’d start.

Since a photographer’s priorities are much different than a tourist’s, my co-leader Don Smith and I decided to concentrate on the most beautiful region of the South Island for our workshops. This approach allowed us to emphasize quality time at the best locations, rather than the quantity-oriented hit-and-run approach of a typical (non-photography) tour. After lots of research and exploration, we settled on an area within a 100 kilometer radius of the beautiful city of Queenstown. Here’s a sample of what we found: 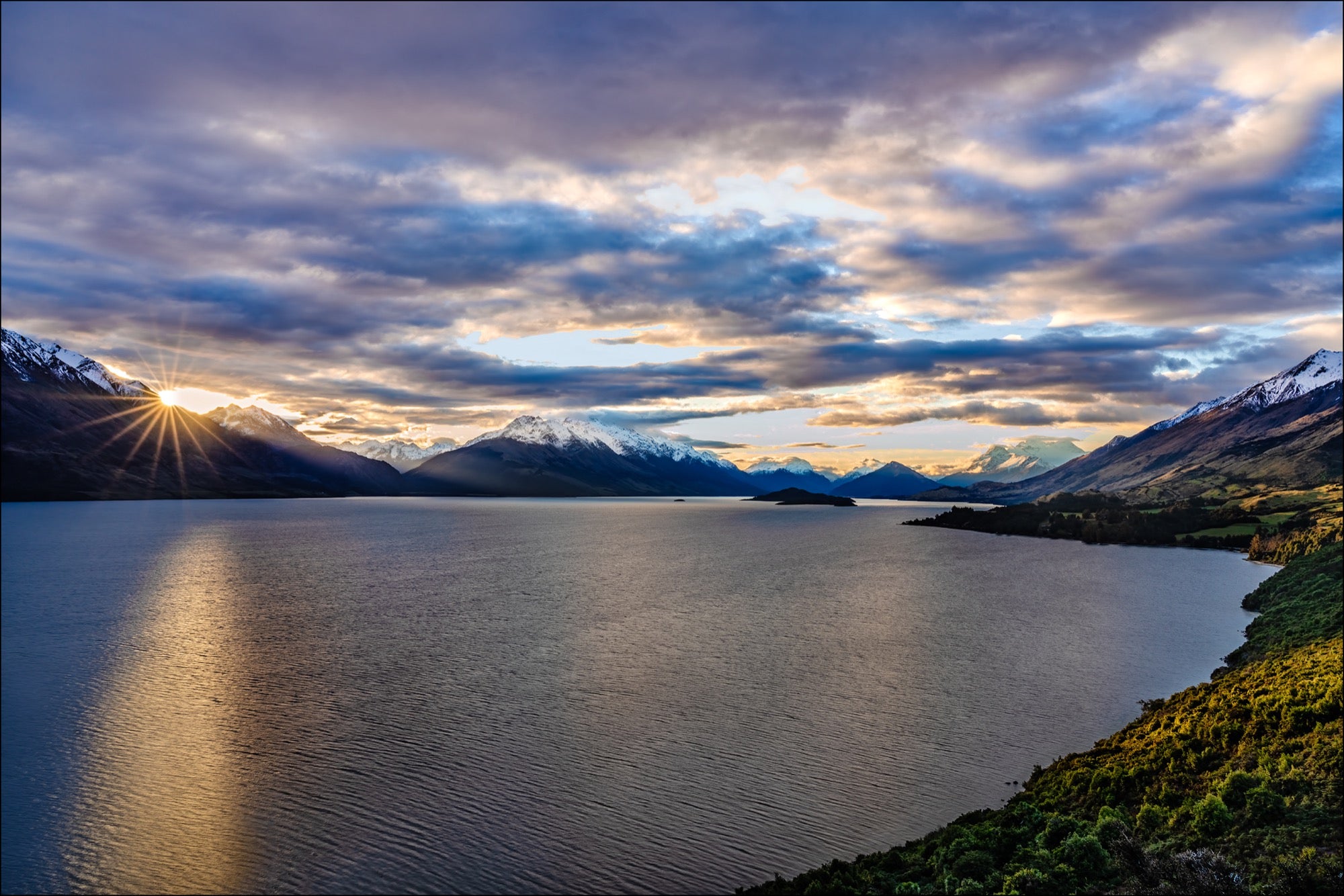 Skirting the shore Lake Wakatipu north of Queenstown, the Glenorchy road winds to a quaint village of the same name at the very top of the lake. But the road’s payoff is as much the journey as the destination. On the way to Glenorchy you’ll enjoy views of scenic coves beneath rugged peaks, and expansive panoramas of the Southern Alps that doubled as the Misty Mountains in the Lord of the Rings and Hobbit movies. Beyond Glenorchy, an unpaved but navigable road continues into Paradise and the remote, dense forests of Middle Earth beyond.

The most spectacular of New Zealand’s many fiords, Doubtful Sound is a narrow, 31-mile, mountain-framed passage that opens to the Tasman Sea. Accessible only by boat, the sound and its many sheltered arms reward visitors with crisp reflections, waterfalls that plunge hundreds of feet into pristine water, and (if you’re lucky) an escort by leaping dolphins. 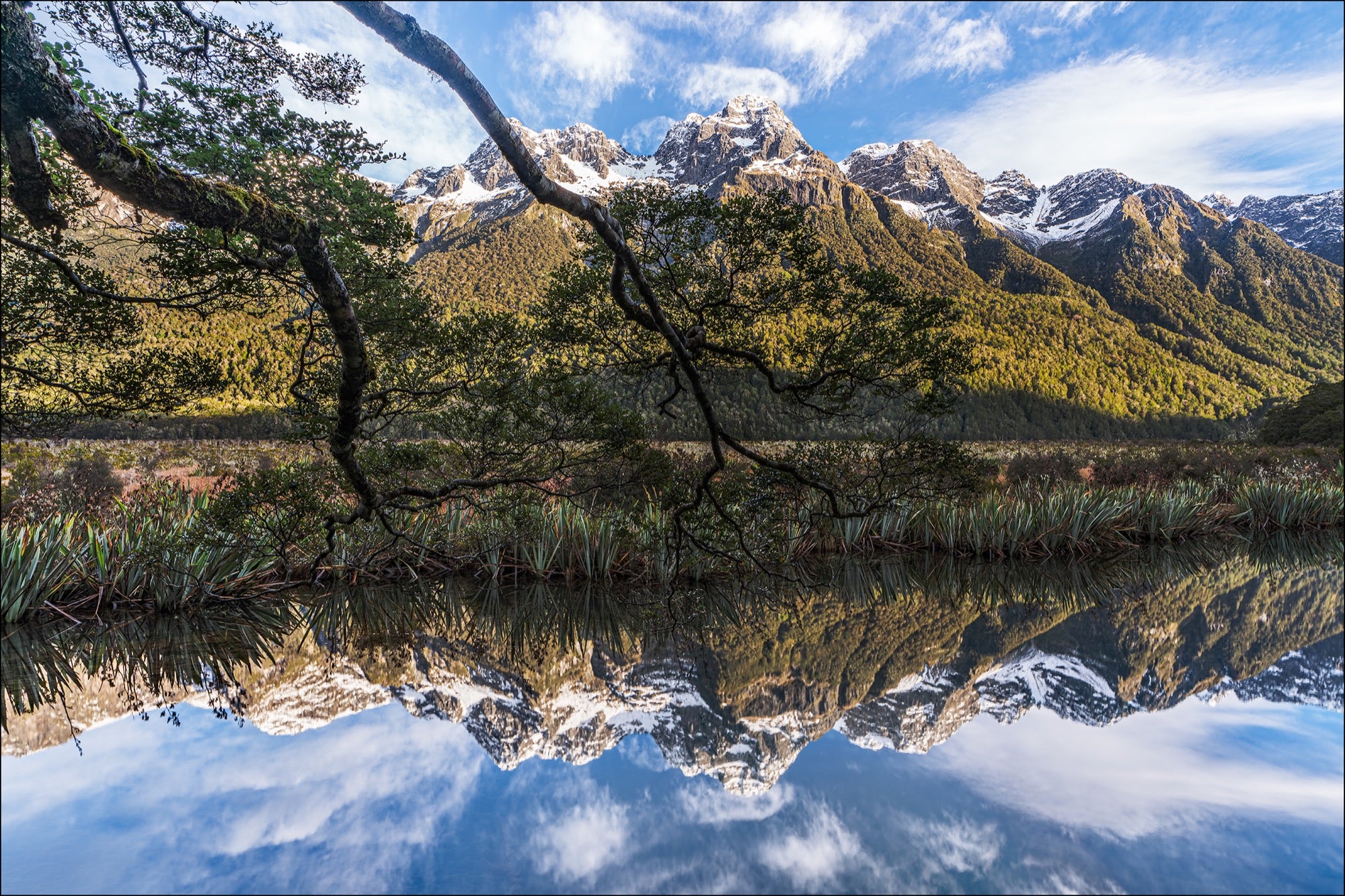 Nestled in the shadow of statuesque Mt. Eglinton, the aptly named Mirror Lakes provide mountain reflections perfect enough to make you believe the world has turned upside down. The best time to visit these tiny gems is in the quiet air of early morning, before the warm sunlight bathing the mountain has reached the lake.

The lone willow tree on the shore of Lake Wanaka is one of the most photographed trees in the world. When the lake fills with snowmelt, it encircles the willow with reflections against a backdrop of snowy peaks.

Connecting the glacial lakes and rolling hills on east side of the South Island to the wet and rugged west coast, the road through Haast Pass is a scenic treat by itself. Despite an array of waterfalls to choose from, my favorite stop on this route is the Blue Pools, where glacial runoff has colored the water otherworldly shades of blue and green. 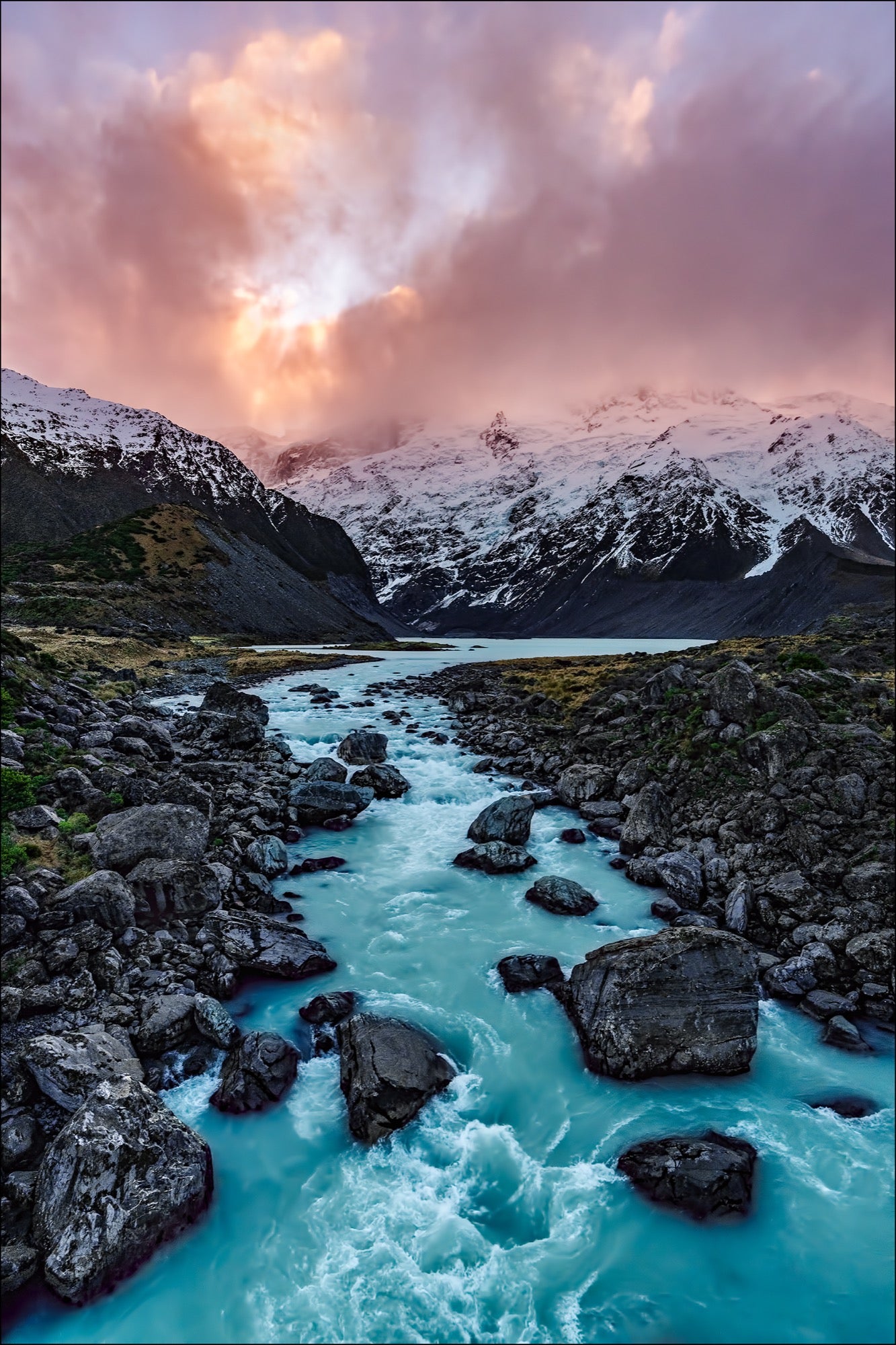 The Hooker Valley climbs gradually to iceberg-studded Hooker Lake beneath Aoraki (Mt. Cook), New Zealand’s highest peak. As spectacular as the destination is, this entire hike is a visual feast of turquoise glacial lakes and streams framed by towering mountain peaks.

Short and steep, the half-mile hike to the Tasman Lake vista includes 335 stairs, but the view will help you completely forget the leg-burn. At trail’s end you’ll be treated to turquoise water dotted with chunks of ice calved from Tasman Glacier. Look up-lake to see the glacier itself. And directly below the vista is a small lakeside pool that perfectly reflects the serrated summit of 9,000-foot Nun’s Veil peak.

Rising 12,349 feet above sea level, Aoraki dominates views on both sides of the Southern Alps. Paired with Mt. Tasman, Aoraki forms the cornerstone of the Lake Matheson reflection near Fox Glacier on the island’s east coast, but it makes an even more prominent anchor above many Aoraki / Mt. Cook National Park lake and glacier views.

Milky Way Over The Remarkables

In the Northern Hemisphere prime time for the Milky Way’s brilliant core is limited by the short nights of summer. But summer solstice in the north is winter solstice on New Zealand’s South Island, and the Milky Way is visible for nearly all of the 14 hours separating dusk and dawn. Combine that with New Zealand’s spectacular scenery and inherently clean air and dark night skies, and it’s easy to understand why New Zealand features some of the best Milky Way photography in the world.

Glacier-carved Milford Sound is a spectacular fjord anchored by monolithic Mitre Peak. Bounded by vertical walls cut by two waterfalls, Milford Sound is also home to dolphins, seals, and even penguins. And even if you’ve never been there, you might recognize Milford Sound as the location of many films, including the opening scene of the most recent “Mission Impossible” movie.