“Nothing is original. Steal from anywhere that resonates with inspiration or fuels your imagination. Devour old films, new films, music, books, paintings, photographs, poems, dreams, random conversations, architecture, bridges, street signs, trees, clouds, bodies of water, light and shadows. Select only things to steal from that speak directly to your soul. If you do this, your work (and theft) will be authentic. Authenticity is invaluable; originality is non­existent. And don’t bother concealing your thievery ­ celebrate it if you feel like it. In any case, always remember what Jean­Luc Godard said: “It’s not where you take things from ­ it’s where you take them to.“

 Ariana Sophia Emnace (I LOVE that name!) is a very talented and beautiful dancer/model/actress that I met while shooting a commercial project in Malibu last year. I’ve been hoping to use her for a shot in my personal work and when I realized I was going to be shooting in LA during a rare storm, I immediately checked to see if she was available. It’s always a bit awkward trying to explain to a dancer the vision that is in my head, but she enthusiastically said “yes” when I said I wanted to photograph her dancing in the waves during a storm, wrapped up in a sheet of plastic. Turns out that dancing in the rain was on her bucket list!

I started this blog post with a quote by Jim Jarmusch because it best describes where the concept for this shot came from. It did not just creatively pop into my head. It was born of a tempest of thoughts, experiences and inspirations rolling around in my head. The idea of the flowing plastic wrapped around Ariana came from the work of a fine art photographer who does long exposure back and white shots of plastic sheets flapping in the wind. The results are mesmerizing. I can’t recall where I saw the work but I will post a link as soon as I do. I have previously used a variety of fabric pieces the same way I used the plastic sheet in this shot, with dancers Nikki White, Isha Lloyd, and Lauryn Winterhalder. For this photo I opted to try to create a more intense and dark mood because I felt the body of my personal work needed to be tipped a bit in that direction. Life isn’t all about sunsets and rainbows, it’s how we respond to the darker times we experience that often makes us feel most human. There is also no denying that one of my favorite shots of Stefan Calka significantly influenced this shot. Lastly this is almost the exact location that I photographed Nikki White at a couple of years ago. So as you can see, this photo stands on the shoulders of past work and Ariana’s artistic expression.

I arrived at Zuma Beach in Malibu 45 minutes prior to when I was to meet Ariana so I could scout out the conditions and find the best place to shoot. I climbed around the point at the end of the beach into Pirate’s Cove. Frequently this cove has lots of activity in it but this evening we had it all to ourselves (another benefit to shooting in the rain). When I got back to the car I was pleasantly surprised to find Araina had arrived early. Just as we collected our gear the rain started to really come down. We hiked across the beach and over the rocky point into Pirates Cove. I noted that the tide was coming up and got nervous about being trapped in the little cove. I quickly found an escape gully we could ascend if the tide became an issue. I took out a 400 foot roll of plastic that I had brought and cut off a 40 foot length. As we began to unfold it, the wind filled it like a sail and ripped it from Ariana’s hands. It went flying right for my camera and tripod. I tried to run backwards pulling my end of it in hopes of pulling it clear of my gear. I ran smack into a rock and fell on my ass, my pocket knife went flying. While falling I let go of my end of the plastic and the entire sheet wrapped around my camera and tripod. Ariana quickly grabbed the tripod securing it and when we both realized neither of us was injured (other than for my ego) we had a good laugh. We wrapped Ariana in the sheet of plastic making a makeshift rain jacket/robe and then we waited for the rain to lighten up a bit. We waited a long time.....a really long time.        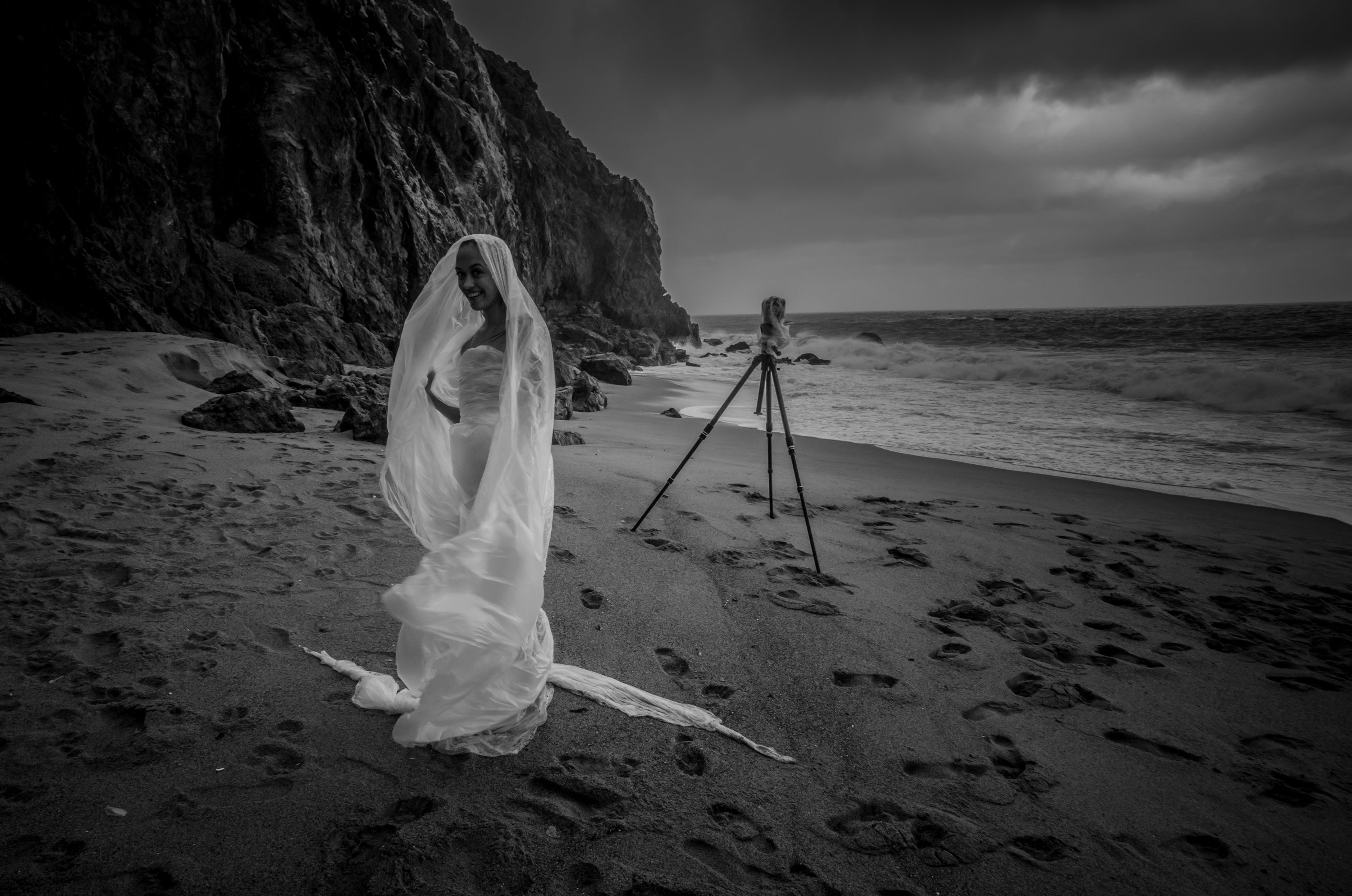   Just before nightfall the rain eased, we decided if we didn’t shoot now we wouldn’t have an opportunity. I planted my massive tripod deep into the sand and surf to stabilize my Sony a7R camera with a 21mm Voigtlander lens. I tried my best to keep the raindrops off the lens but was forced to frequently wipe them off. 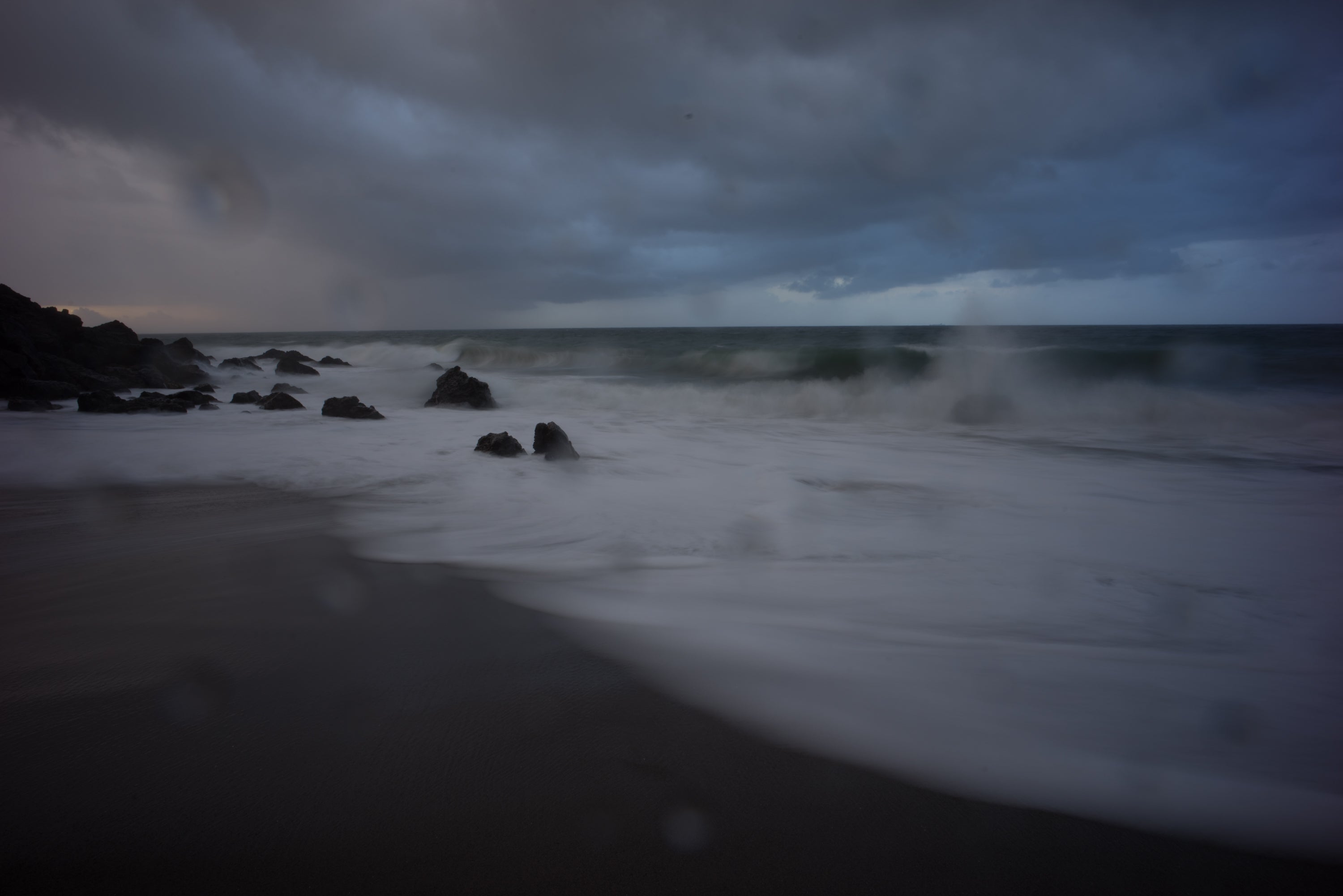   The wind played havoc with the plastic wrapped around Ariana. We shot over 100 images, each one looked dramatically different from the previous. About every 30 photos I took of Ariana, I asked her to step back and I changed the exposure to shoot with a slow shutter speed (approx 1 second) to capture a few frames of silky water. One of these frames would become the new background to the shot I chose of Ariana. We experimented with how the plastic was wrapped around her, she tried a variety of poses and angles, I fought to keep my equipment functioning and to successfully capture the moment. At one point a wave grabbed hold of the plastic sheet wrapped around Ariana and it nearly pulled her down. 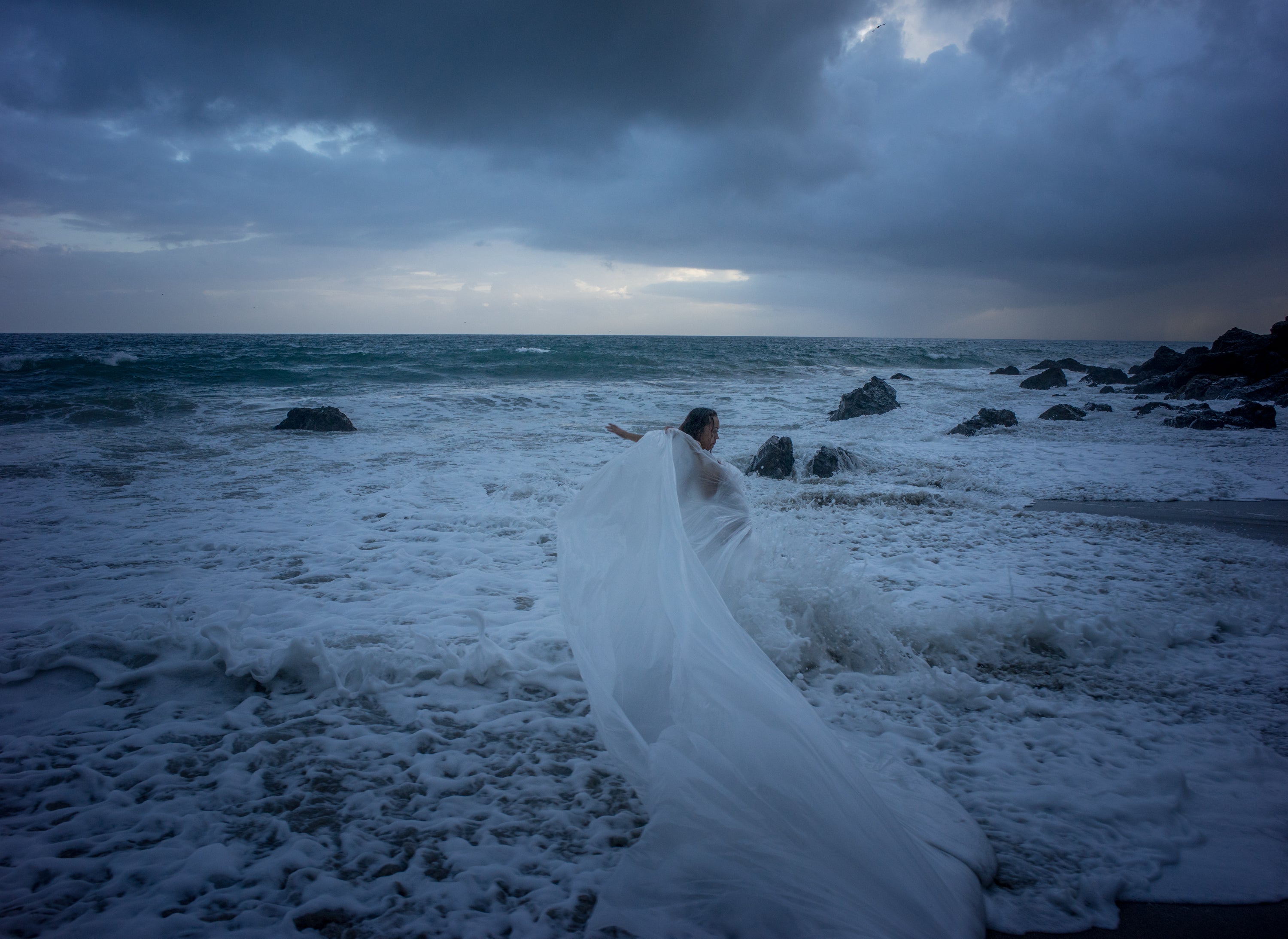   Just as the rain began getting intense and darkness came, our friend Nikki White came climbing over the rocky point to see if we needed any assistance. Feeling that we had captured some great images, we had Nikki help us collect all of our gear and make the soggy hike back to our vehicles. 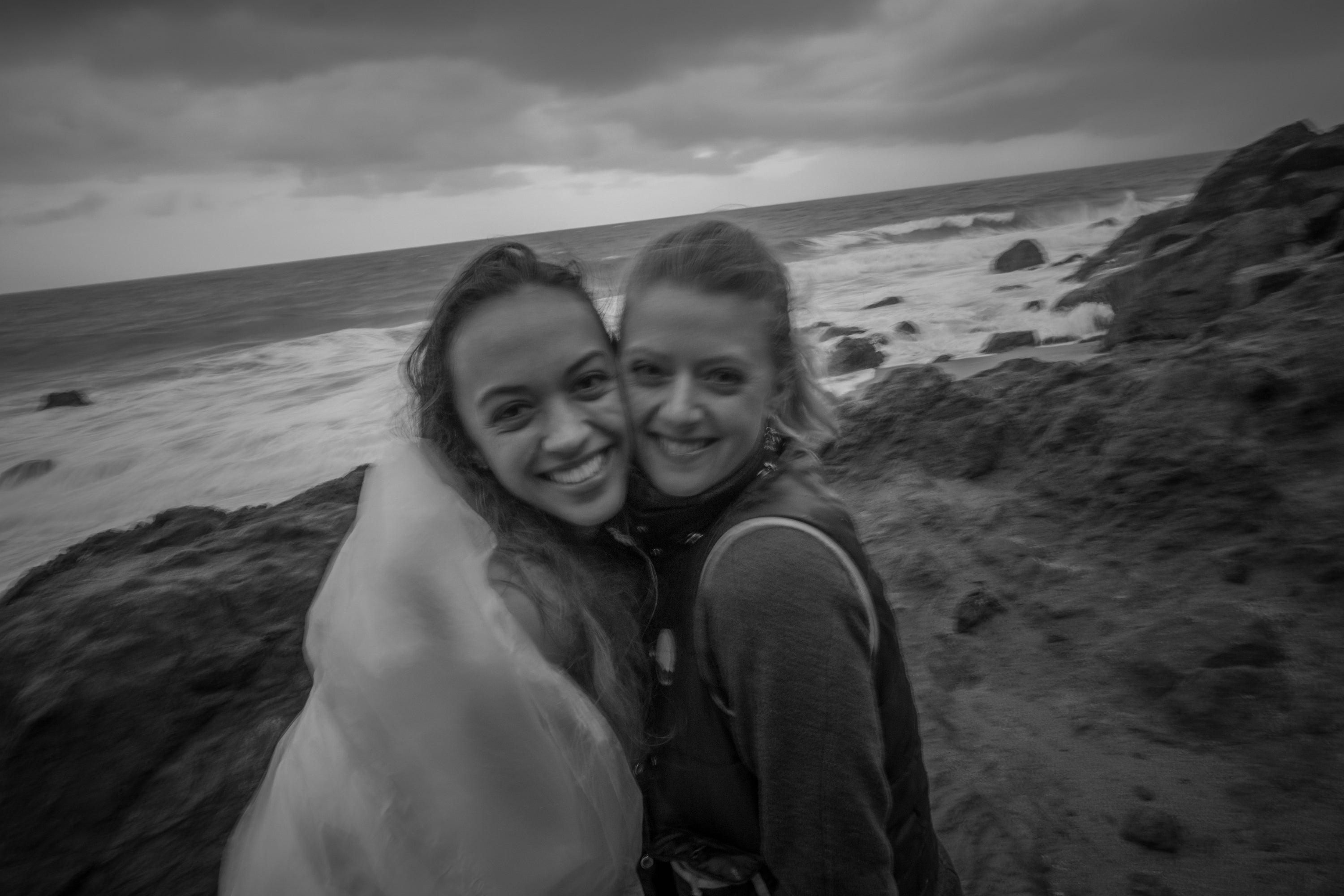 When I finally got back to the guest house I was staying at, I changed into dry clothes, dried off all of my dripping cameras and lenses, grabbed a beer and spent a couple of hours sorting through all of the images. There are few feelings better than seeing your dreams turn into reality.

Artists note: After answering so many questions at gallery openings and in online forums about this series of photographs, I need to take a moment to explain how they are created. I have never nor will I ever take a photo of a dancer from one setting (be it a studio or other location) and Photoshop them into the landscape of the final piece. (This goes for my personal work series. I have been commissioned to make photo illustrations for commercial use, of dancers in outlandish settings, like engulfed in flames, hanging from a helicopter, jumping from a tower). The dancers you see in the landscapes in my personal work series, were actually dancing in those landscapes. Sometimes this involves traveling for several days and hiking into the Sierra. Sometimes it involves dancers dancing in hail storms, snow storms or holding poses for 90 seconds in the middle of the night under the Milky Way. If you have a difficult time believing this (which is totally understandable) just ask any of the dancers that are featured in these photos. I have no interest in manufacturing a series of photos that represent my personal passion for photography and expression by sitting in front of my computer.

That being   said, there are shots in this series that use techniques that blend a long exposure frame of the background with short exposure frame of the dancer. As in this photo, I used a one second exposure of the ocean with a 1/250 of a second exposure of Ariana striking her pose in the surf. I personally have no more of an issue using techniques like this than I do converting a colorful landscape into black and white photograph. For me what is important is the authenticity of the experience. Ariana did indeed strike this pose in the waves along the shores of Pirate Cove, in a miserable storm, at sunset. 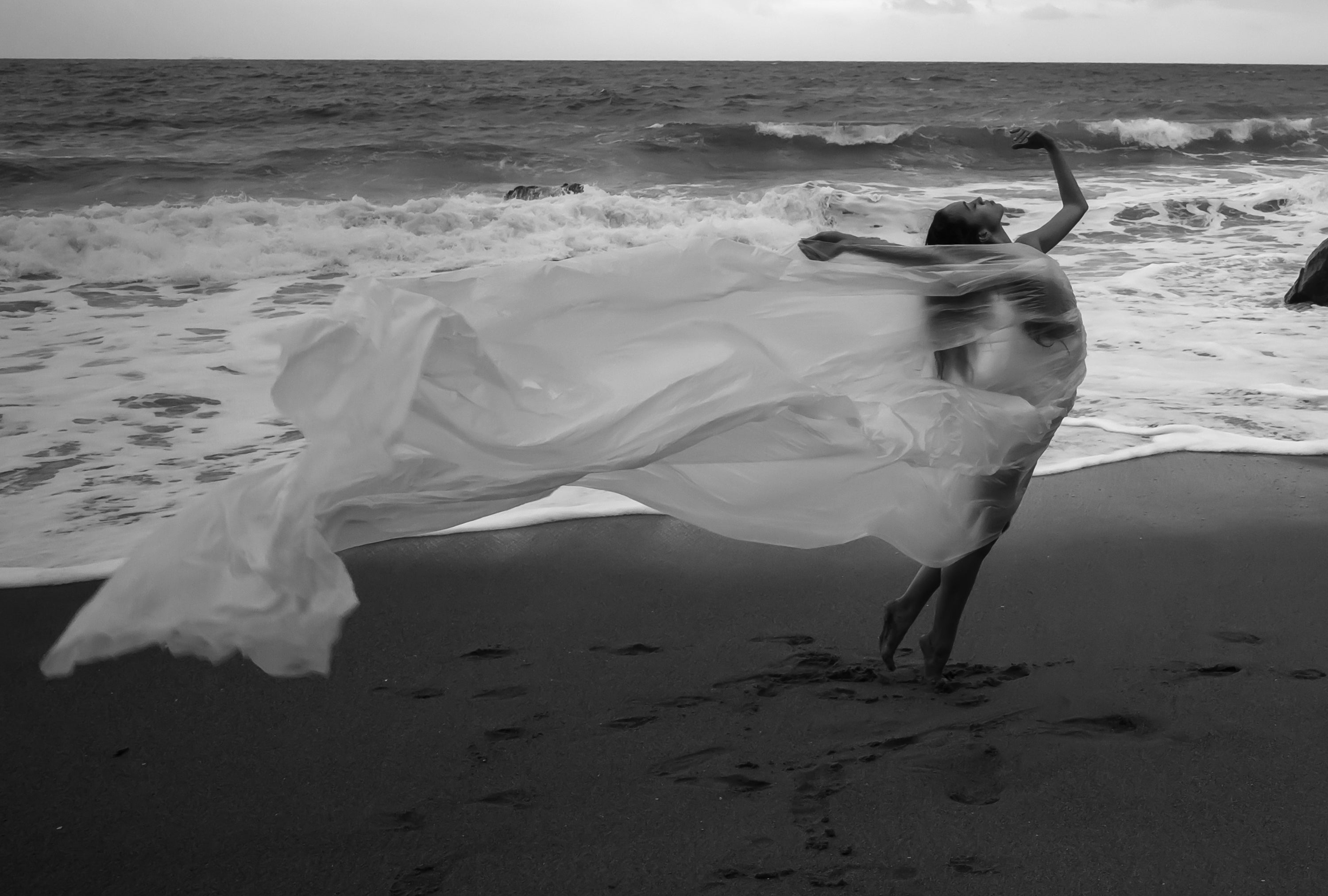 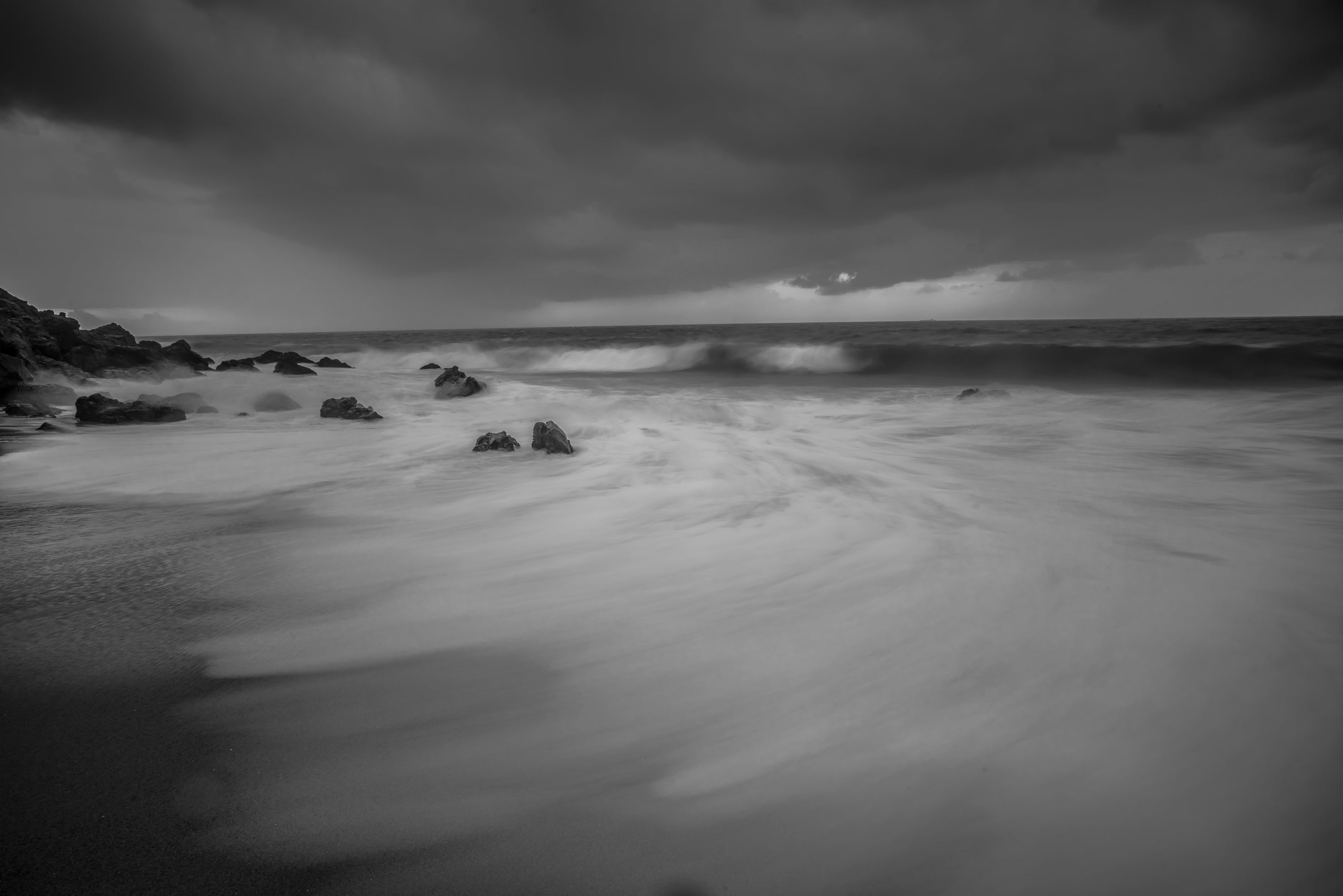