I'm traveling to Europe for three months and I really need to think about what cameras and lenses I’m going to bring and what I'm going to be doing there. I’ll be teaching a group of students from Brooks Institute, plus during that time there are two Fashion Weeks that we'lll be shooting—Men's Fashion Week in June and Haute Couture Fashion Week in July in Paris. Those are really huge events for me and the students.

My main lens will be the 24-70 mm f/2.8 G Master during both of the Fashion Weeks. I’ll also be using the 85mm f/1.4 G Master on the second body. That will be the perfect pair of lenses for the events. I’ll also be doing a lot of street photography in Paris and elsewhere. For street shooting with the α7R II, I prefer to use prime lenses. I’ll be bringing three primes with me, the Sony FE 28mm f/2, the Sony Sonnar T* FE 35mm f/2.8 ZA and the Sony Sonnar T* FE 55mm f/1.8 ZA. All of those lenses are super sharp and very light and they have very nice bokeh. In particular, I love doing portraits on the street with the 55mm f/1.8.

I’m bringing the Sony Vario-Tessar T* FE 16-35mm f/4 ZA OSS. I use that one for landscapes and cityscapes. It's sharp and the f/4 maximum aperture is perfectly fine for that kind of photography. I know some people say, "Oh, I wish it was f/2.8," well, there's no need for that when I’m shooting cityscapes and landscapes.

My main cameras will be a pair of Sony α7R II bodies. They are just awesome with their 42 megapixel sensors and they are small enough that it’s easy to pack two without having to sacrifice anything else.

I’m bringing the Sony RX1R II for street photography when I don’t want to carry an interchangeable lens camera. I absolutely love that camera! It's light and it's small. It has 42 megapixels and it has the perfect lens for street photography—a super sharp 35mm f/2 that also creates a really nice bokeh.

I’ll also have an RX100 IV because it’s truly pocketable and it has a zoom lens that makes it extremely versatile when I don’t know what I might run into. I cannot imagine walking anywhere and not having a camera with me. When I have just that camera, I feel like I can get professional quality photos in a pinch.

A small flash is absolutely essential. I carry the Sony HVL-F43M which gives me enough power to add a little pop in daylight. I always like to have the Xrite ColorChecker Passport to ensure that I’ll have accurate colors for photos and especially for video shooting. I’ll also have a trio of four-terabyte hard drives which will be enough for three months. I always travel with a small table-top tripod, too. It might not look very professional, but I use it a lot on bridges and walls and all sorts of situations. 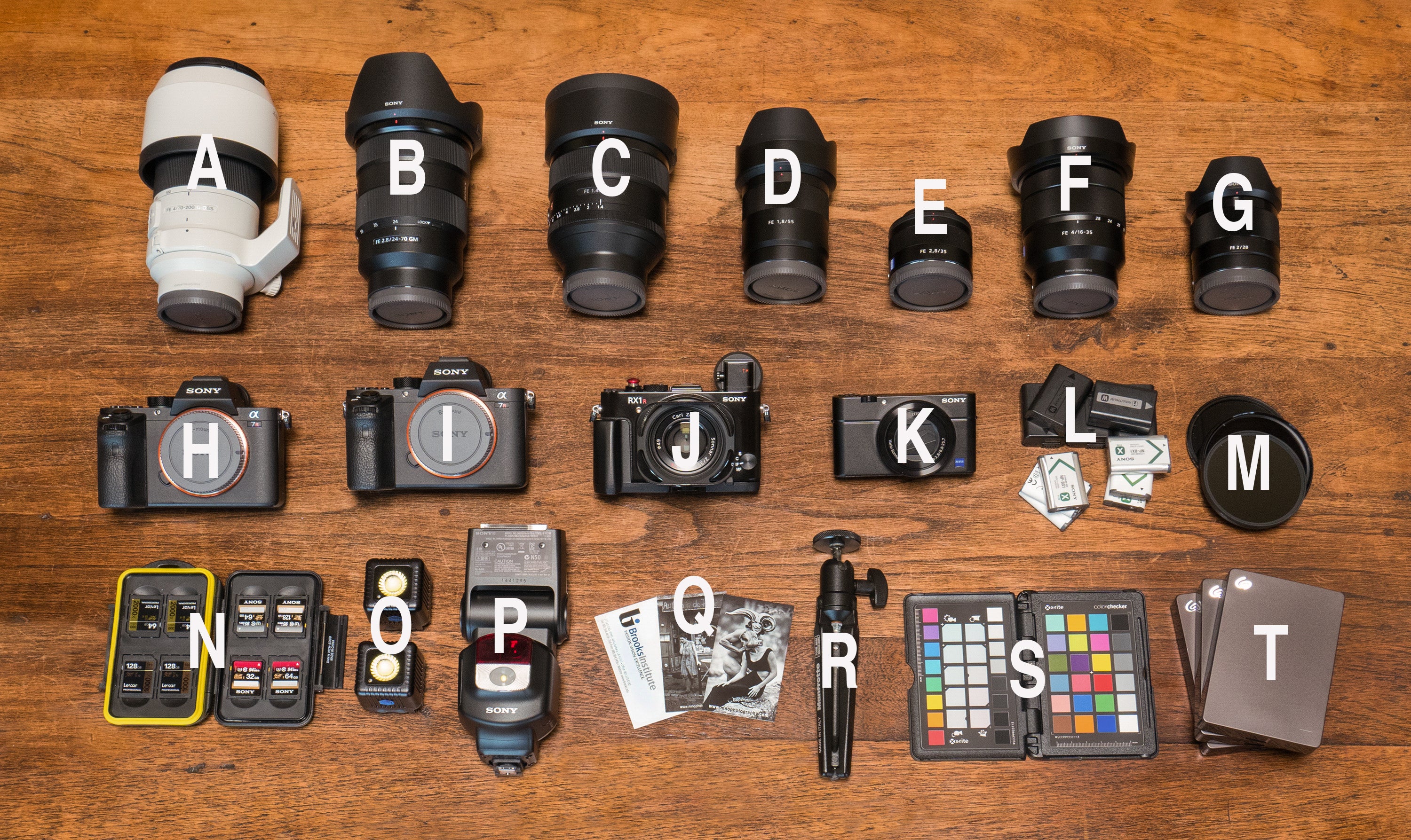 Q. Three types of business cards. One is from Brooks Institute where I teach. The other two are from my own business. The first one represents me as a street photographer, and the second I give to people in in the fashion industry.

Not in the photo, but going with me to Europe - MeFoto RoadTrip carbon fiber tripod - ThinkTank Airport Takeoff – dual-purpose roller converts in to backpack - Hugo Boss satchel converted in to a camera bag - A few step up rings - X-Rite ColorChecker Passport Video - In the end I might bring one of my two Sony α6300’s and some lenses. It is such a good camera it would break my heart not to use it for three months!

While I’m traveling, I’ll be writing articles for AlphaUniverse.com and I’ll be posting to Facebook and Instagram every day. Check back in here and follow me @nino_rakichevich.