My name is Melissa Maahs (@melissamaahsphotography) and I started my business, Melissa Maahs Photography, almost 10 years ago. I’m mainly a portrait photographer, but I also love photographing landscape and nature, including macro photography, in my free time. I love learning new skills and about three years ago I started to experiment a lot with studio lighting. Recently, due to the pandemic, I had to temporarily close my business as I’m not considered an essential service. My temporary closure meant that I had some free time on my hands, so I started to dabble in product and food photography, which then led me to macro photography and experimenting with oil and water. 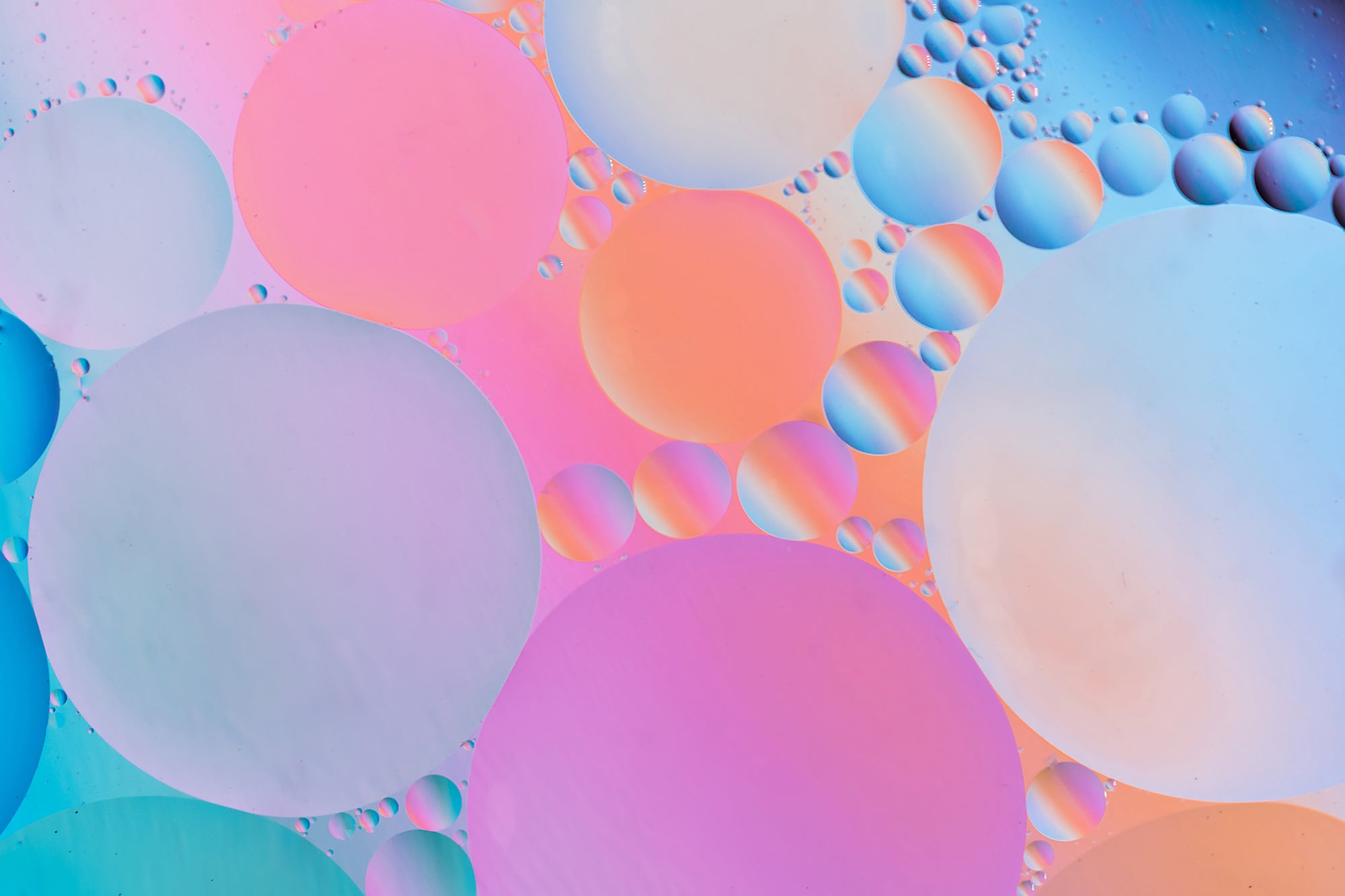 I quickly learned that a macro lens would be helpful for product and food photography. It didn’t take me long to get bored of product and food photography, so I started to do more abstract work, such as taking macro shots of bubbles, and then oil and water. I was inspired by a few photographers on YouTube who posted some really great tutorials on how to photograph oil and water. One tutorial I found, the photographer was using a strobe to light the scene from the side, and then to make the different colors, he was using small paper backdrops. I had the idea to use an iPad as the light source with different free wallpapers that I found on the internet. I quickly learned that the iPad did double duty, serving as the main light source and the colorful background to the oil and water shots. 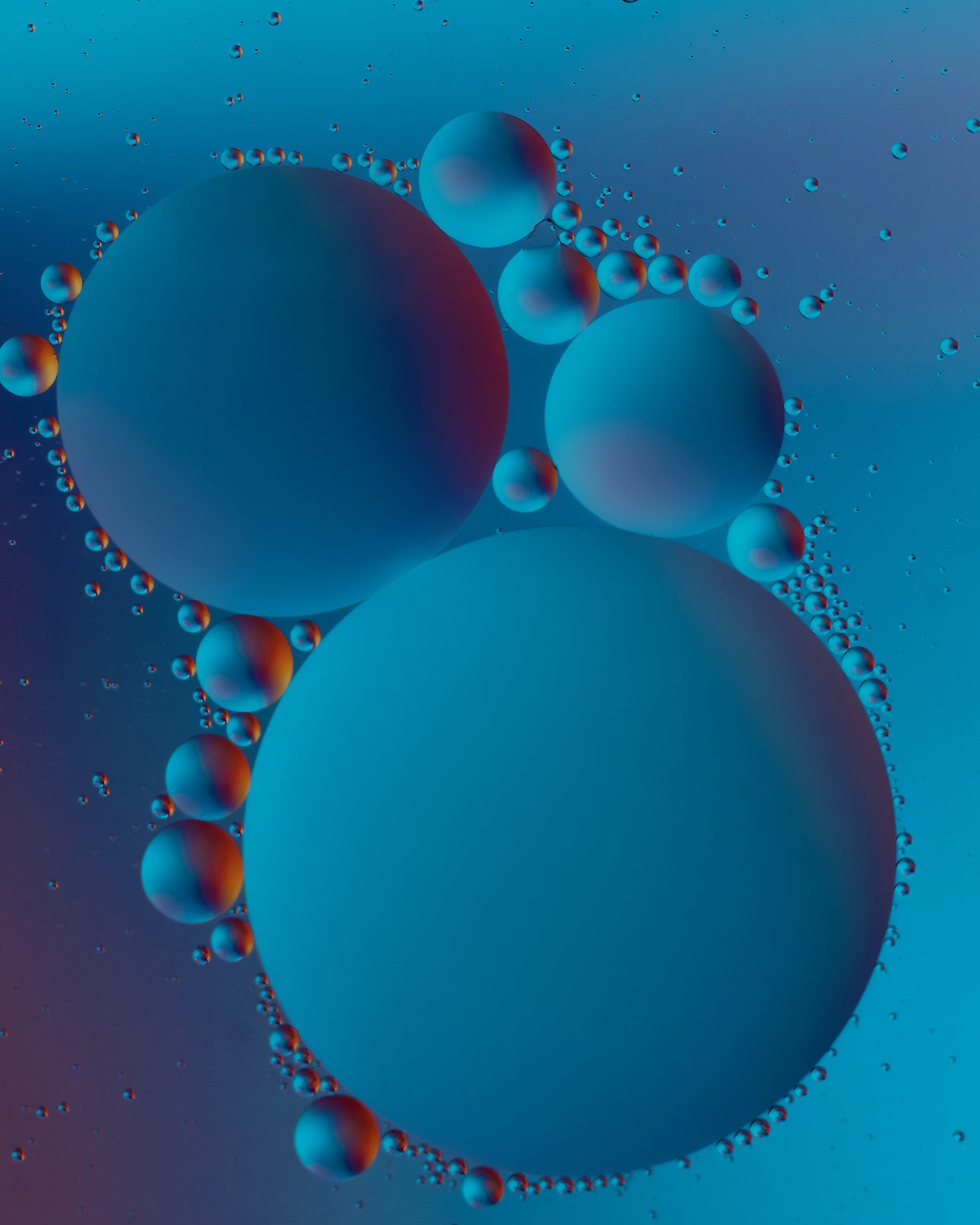 How She Does It

I have a small home studio and this is where I set up to do my oil and water macro work, although you can do this work basically anywhere. For my setup I used a clear glass dish with about 1/2 inch of water in it. I poured some oil into the water and used a toothpick to periodically stir the oil into the water to create different ‘circle’ patterns. 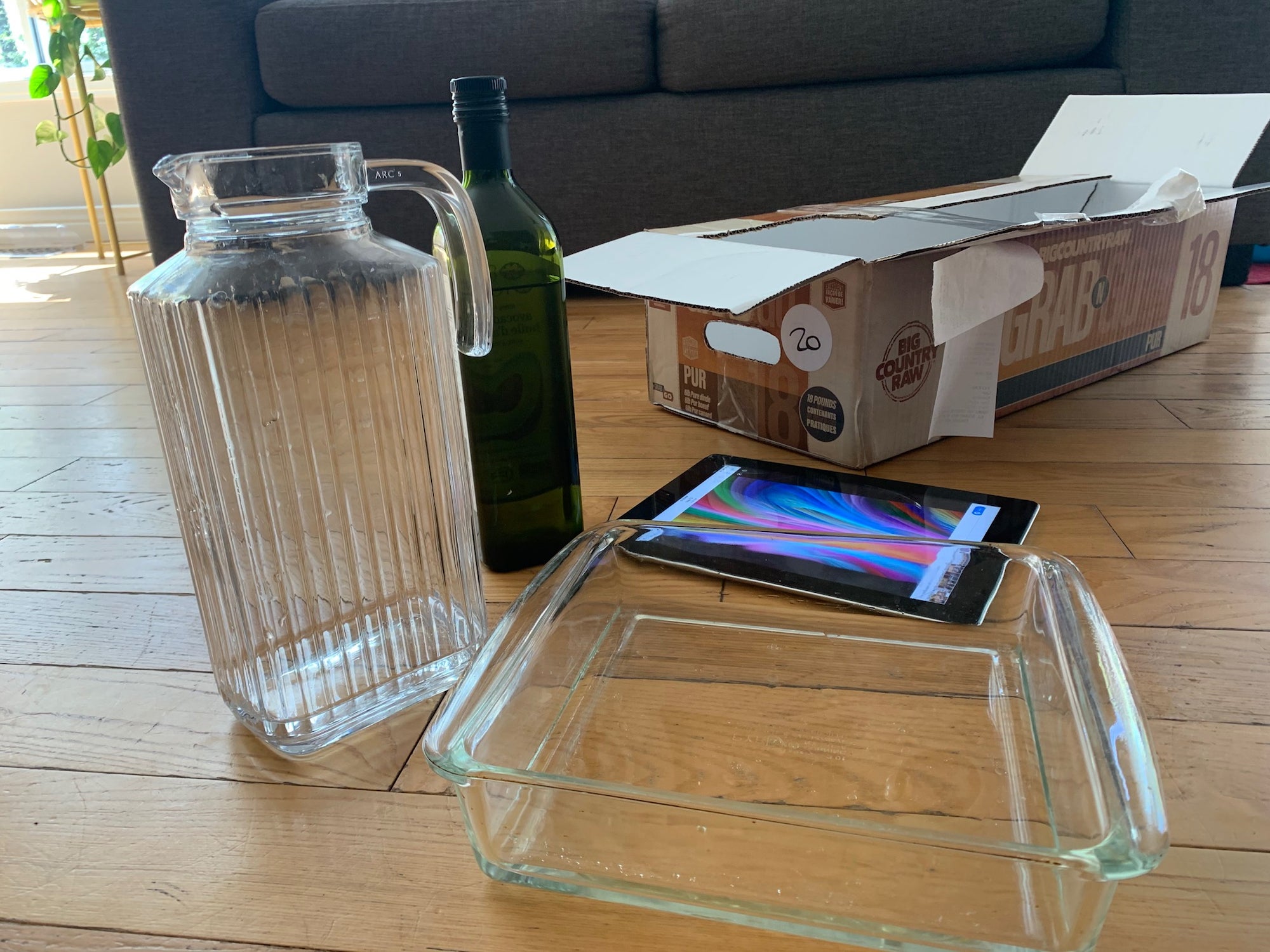 The dish needed to be up off the surface a bit so that I could put the iPad underneath it with about 5 inches between the dish and the iPad. I just did this with a box. The Pyrex dish was balanced on the open part of a box (the box has to be smaller than the dish) and the iPad was under the dish, inside the box. 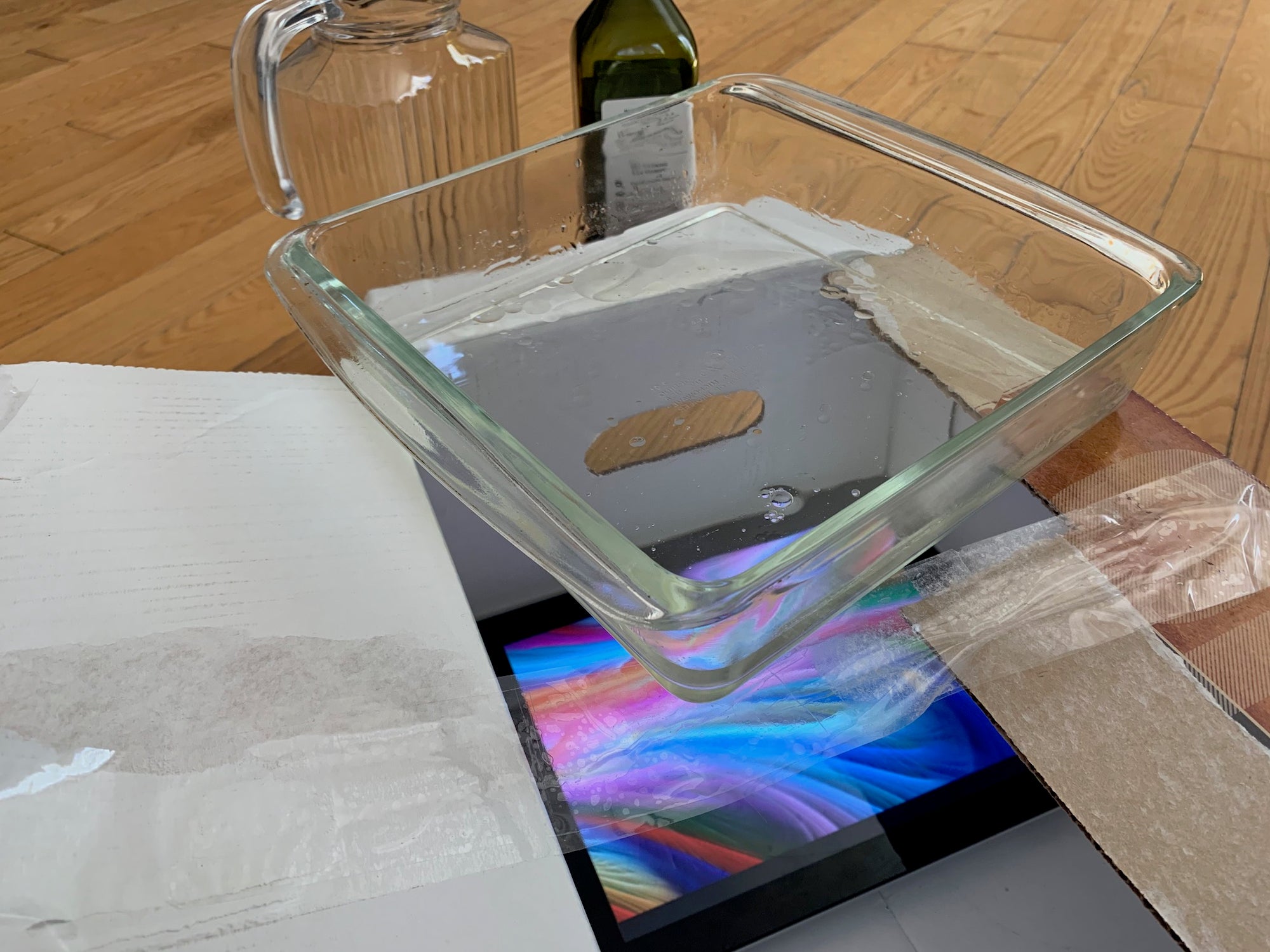 I found some free colorful wallpapers on the internet and put them on my iPad. For different tones/color palettes I would just change the wallpaper on the iPad in between shots. The light from the iPad was the only light source used in the oil and water shots. It’s super easy and super low tech! 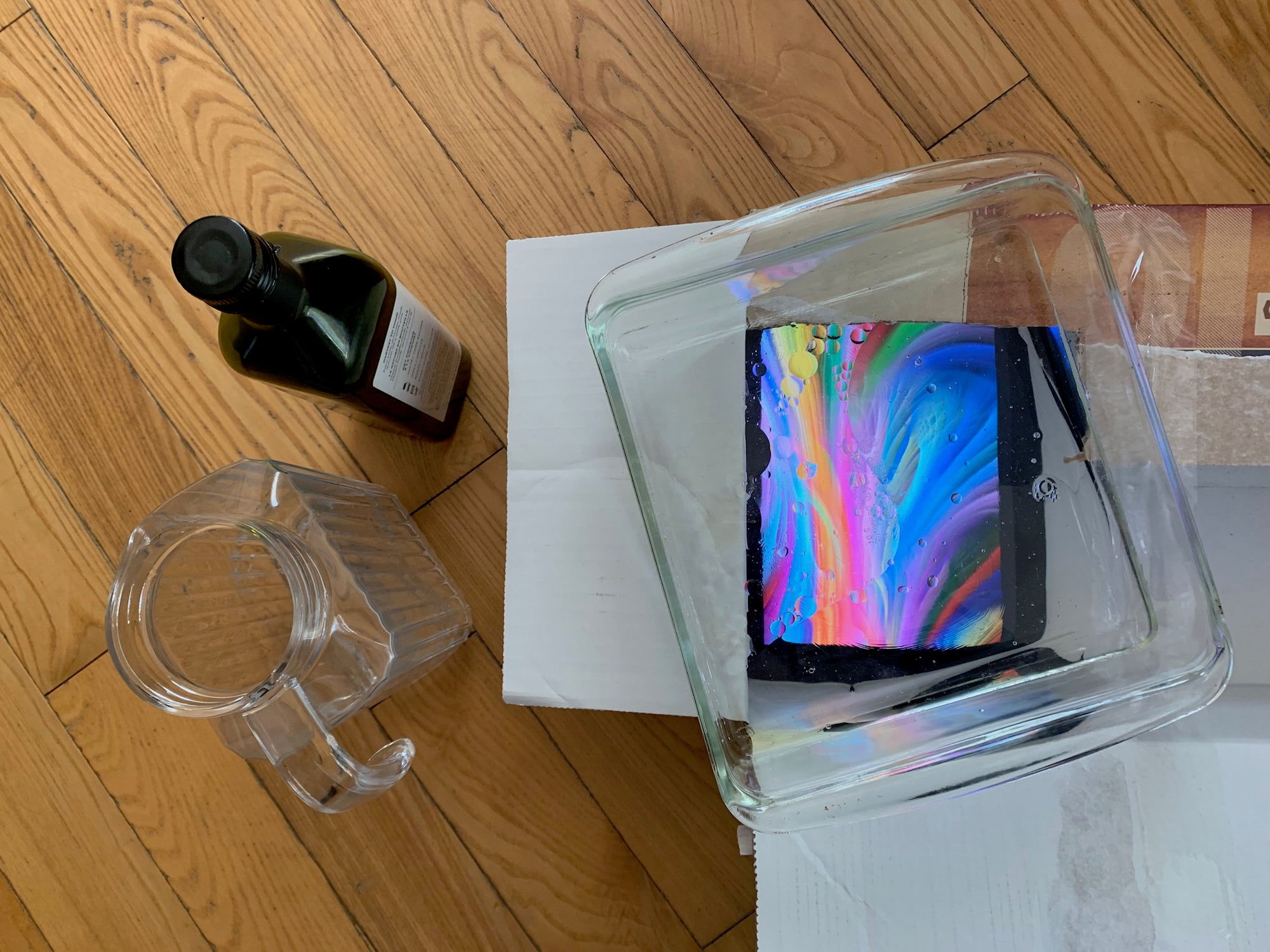 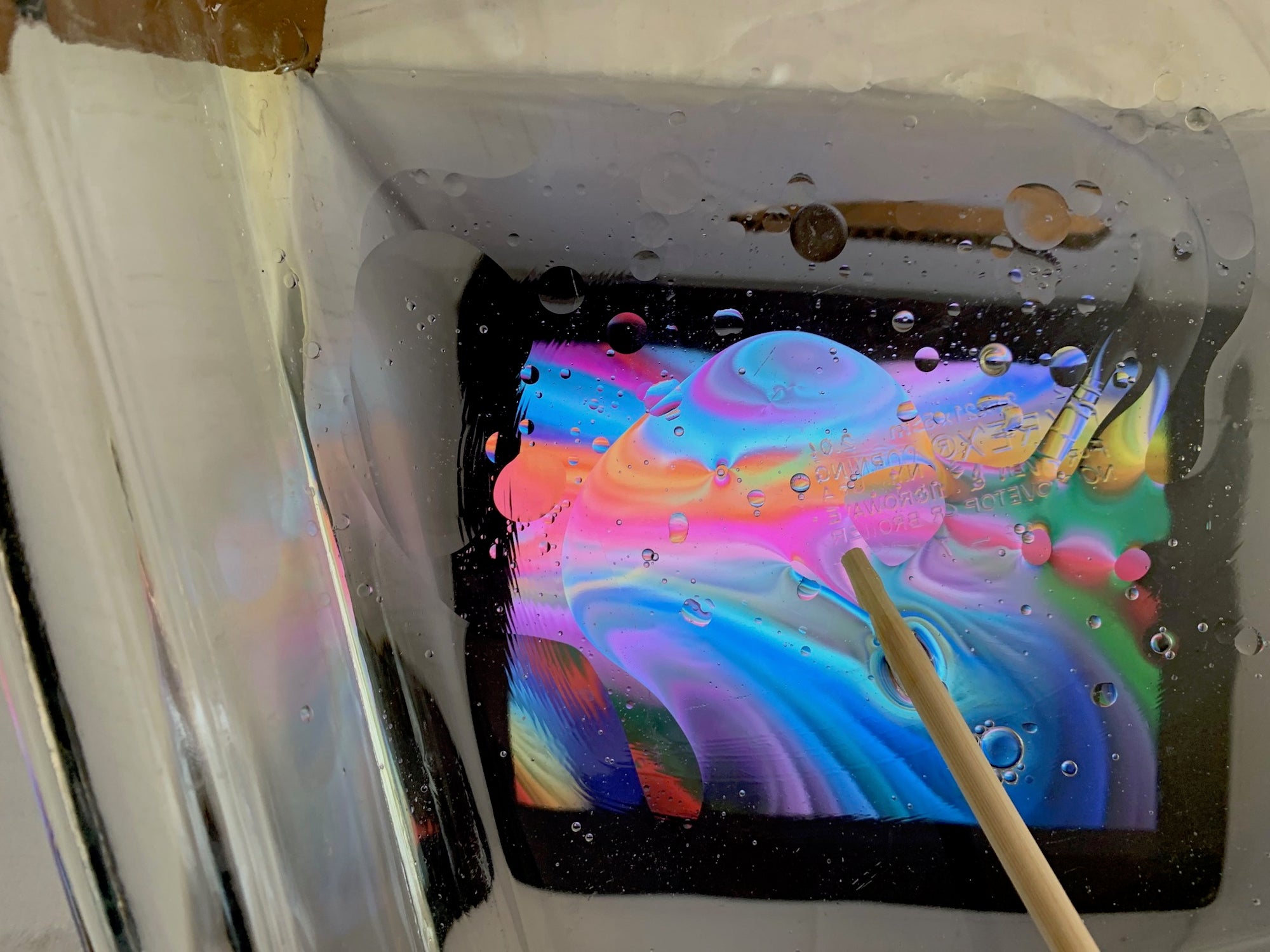 To take the photos I basically just shot from directly above. I tried shooting some from an angle, but I much preferred the shots that were taken from above. My settings for these are 1/200-sec., f/3.2 and ISO 1250 with manual focus. I shot all the photos handheld and in RAW format. I didn’t use a tripod because the oil bubbles do move around a bit and I wanted to be able to move freely so I could capture the patterns. I mostly used the LCD screen on the back of the camera to see what I was shooting. It was hard to hover overhead for long periods of time, so the tilting LCD screen was very useful while doing these. 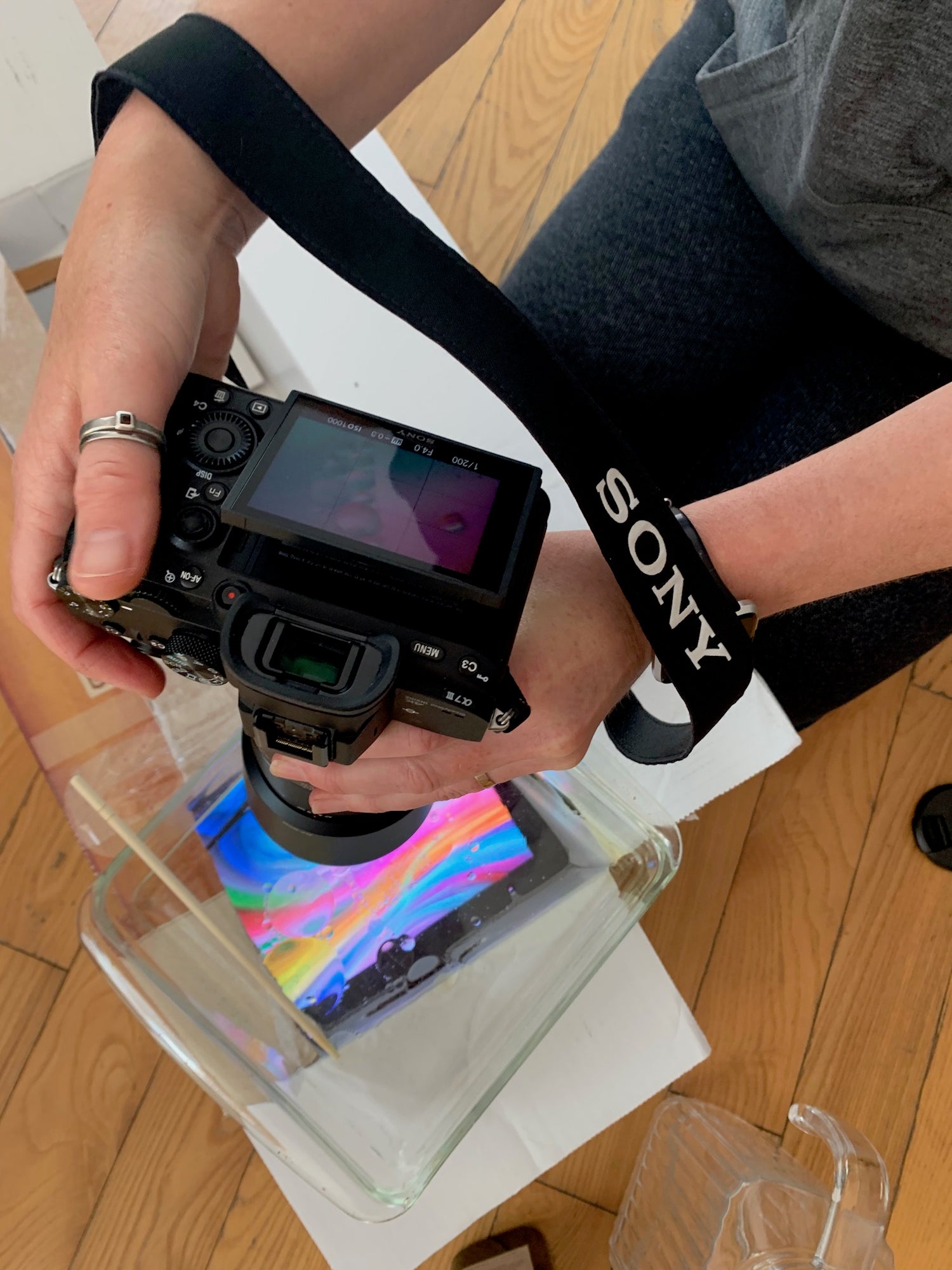 I then used Lightroom and Photoshop to process the oil and water images. They really didn’t need much editing. I played around with the highlights and the shadows in Lightroom, and also saturated the colors a little bit. I added some clarity, sharpening, and a bit of noise reduction. In Photoshop, I just removed some minor imperfections, like dust, that settled on the water while shooting.

You can see more of Melissa’s work on Instagram @melissamaahsphotography.