We connect with music photographer Sanjay Suchak (@sanjaysuchak) to learn more about his process for photographing bands on tour. It’s a rare inside look inside the music.

Sanjay Suchak (@sanjaysuchak) is currently the photographer at the University of Virginia and serves as a tour photographer for several bands, including the iconic Dave Matthews Band (DMB). While touring around and witnessing a band play night after night, Suchak begins to pick up on the reoccurring moments that make for great photography. “It's pretty amazing because you get to know the nuances of the band that you work for,” he says. “You get to know when the normally quiet members of the band come alive, or when the drummer is on a certain side of his kit or the singer is going to do a jump.” We connected with Suchak about what it’s like to be a music photographer on tour. Keep reading to learn more about his process and how he sets up his Sony Alpha gear to capture all the right moments of a band’s show.

We connect with Sanjay Suchak, tour photographer for iconic bands including Dave Matthews Band, to find out how he does what he does so well and how he sets up his Sony Alpha gear for a show. 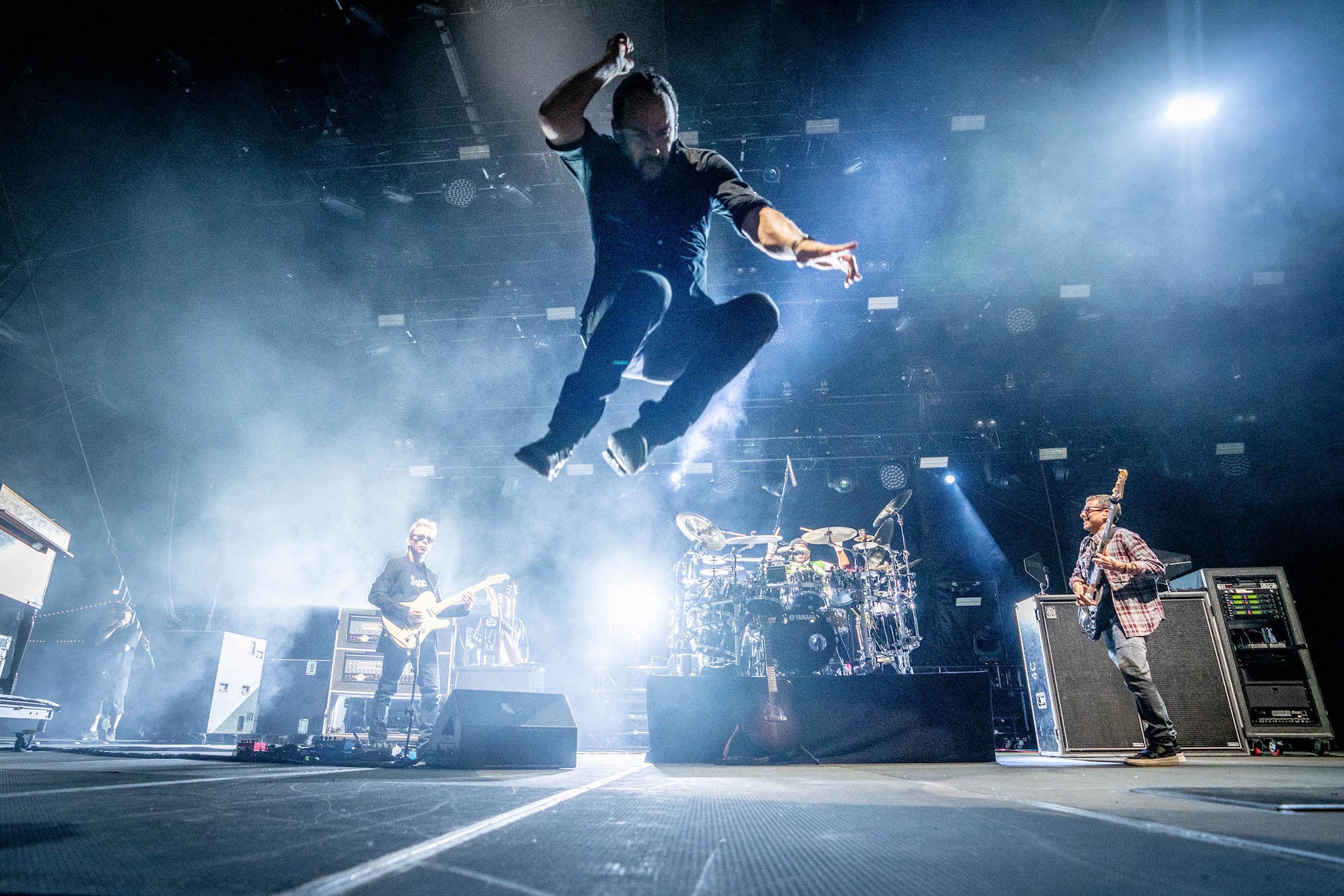 Editing Photos From The Last Show

Every day on tour for Suchak begins with editing photos from the previous night’s show. “As a music photographer, I have to turn these images around by whatever time management wants. I try to do them by 10:00 a.m. or 11:00 a.m. That way there’s plenty of time for the layers of approval so they can be posted and everyone in all time zones will see them at the proper time for engagement.”

After he has the images from the previous night submitted, he says that at that point the stage has been mostly set up and there will be a sound check for the band – that’s when Suchak goes around to tour the venue. “You might think each venue would be pretty much the same, but they're very different. The stages are smaller, bigger, and higher or lower and there's different vantage points depending on where you are. I always want to have good wide shots, so I try to scope out where I can go for those and if I can access the catwalk and such.”

As he finds the spots he wants to shoot from, he sets up his remote cameras to capture those different views of the show. He usually has a Sony Alpha 9, Alpha 9 II and Alpha 7R III that he hides around the set. “I chose the Alpha 9 and the Alpha 9 II for those places because the auto focus for the remote captures is pretty spectacular in both of them as well as the resolution,” he explains. “I leave it on wide zone, continuous autofocus, and it does a great job of picking up whatever the dominant thing in the picture is. If I’m photographing a DMB show, I usually have one on Carter's drum kit facing the back shot of Dave, so if he turns around toward Carter or does a cool dance or the house lights come up, I can capture it. I also might have one on the base amp, I might have one on the horn cable or somewhere in the keyboards. It really depends on what kind of lenses and the size of the venue and what I'm feeling like that day.” 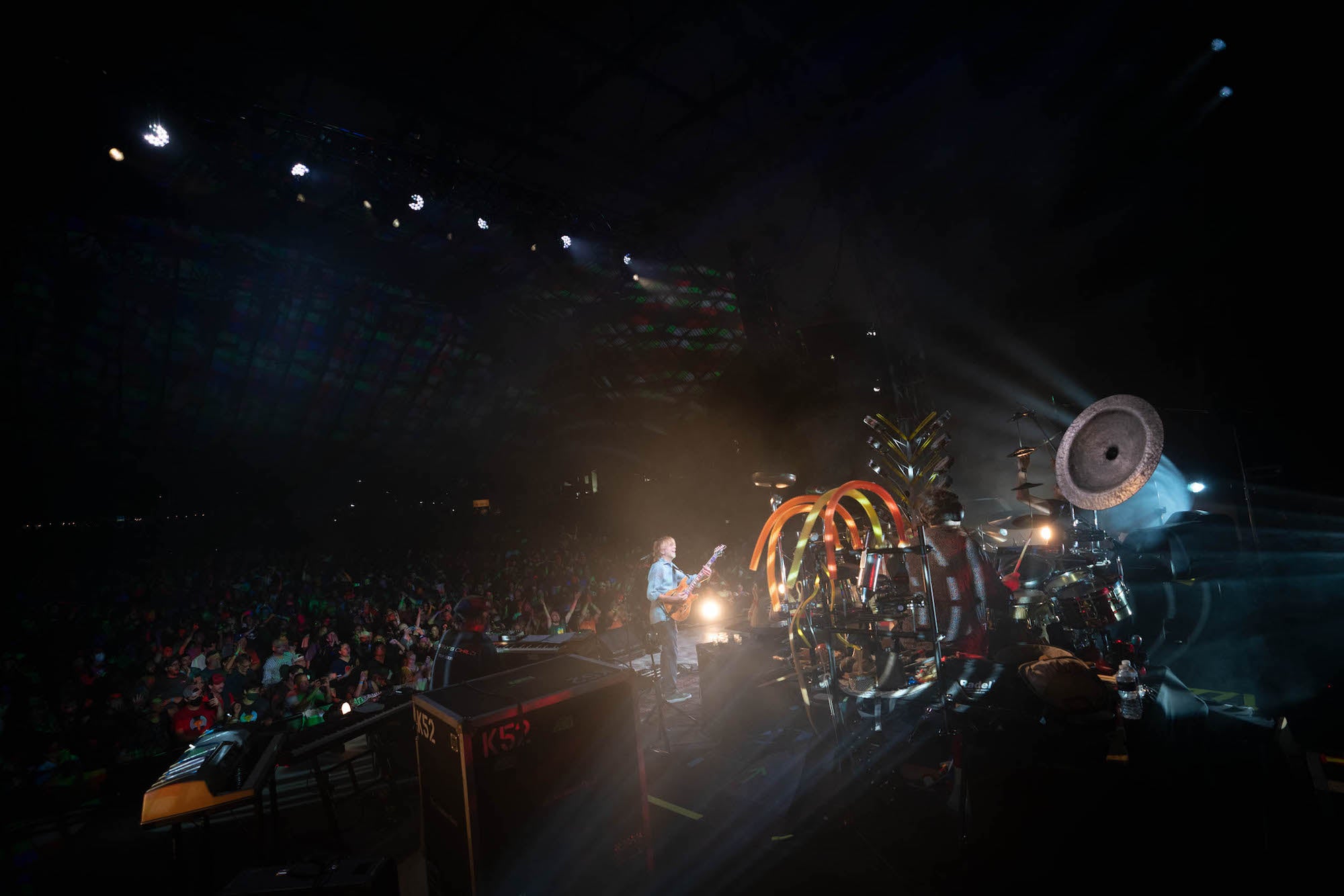 He sets all of the remote cameras on PocketWizards so when he presses the button, all of them trigger at the same time. “I also set the PocketWizards to be a certain frequency that doesn't mess with the monitors and the in-ear packs where we can all talk to each other. If you’re a photographer at a show and you think about doing this, make sure you consult with the monitor engineer so you aren’t interfering with anything or that could be a bad day for you.”

In addition to the remote cameras he sets up, Suchak also has a Sony Alpha 1 and his other Alpha 7R III ready to go. During the show he’ll carry these around on his shoulders. He also packs two Pelican cases full of lenses to take with him to each show. “I bring the Sony 70-200mm f/2.8 G Master which pretty much lives on my Alpha 1. The 12-24mm f/2.8 G Master and 16-35mm f/2.8 G Master both come with me and depending on the size of the venue and where I am will determine which I use.” 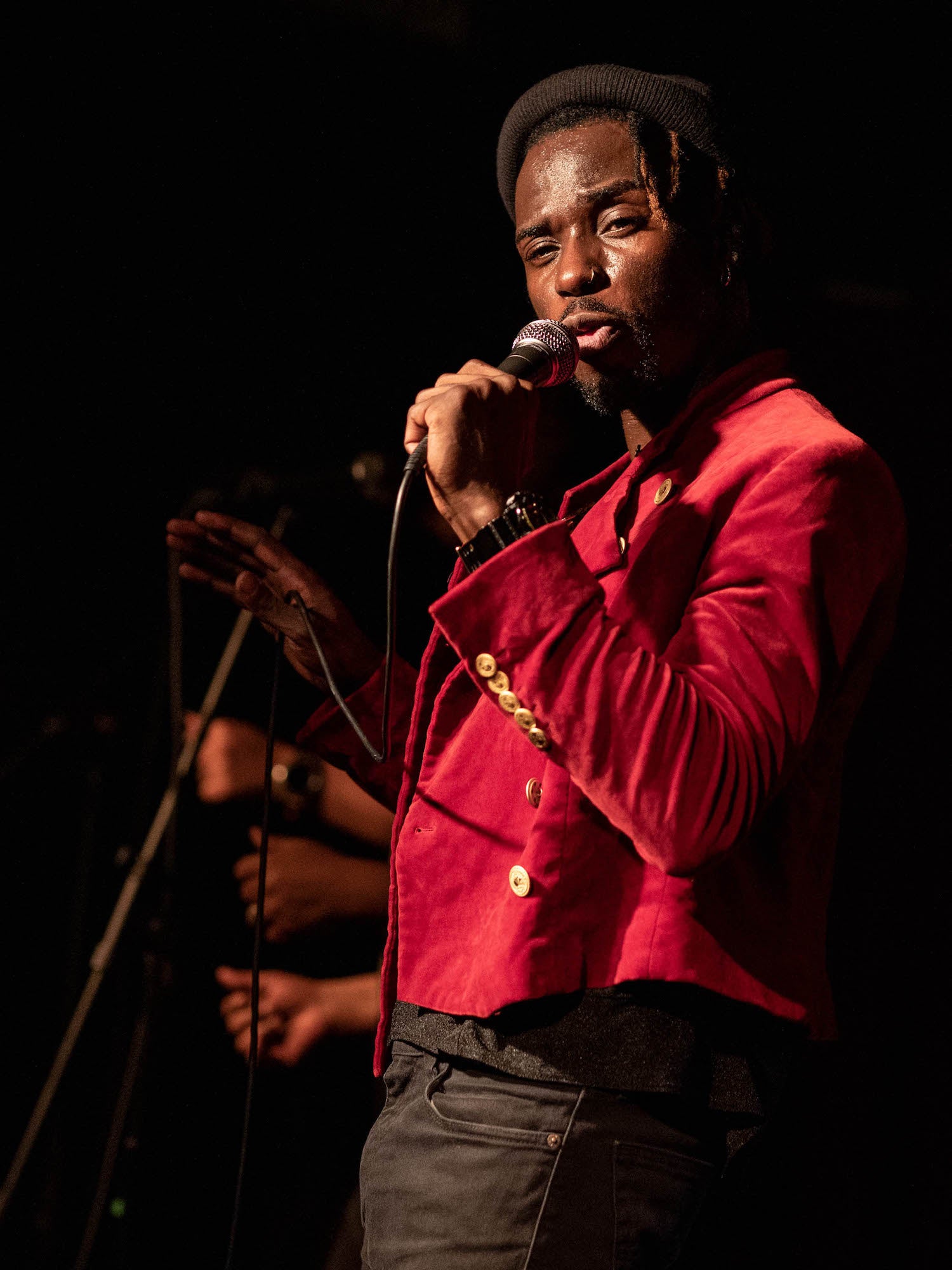 Around 5:00 p.m., everyone on tour eats dinner and about an hour later the band starts getting prepped for the show. “Every band has their own rituals,” Suchak says. “With DMB, Dave writes the set list, so I might try to sneak in while he’s writing the set or doing vocal warm ups for a photo. Or I might try to sneak in on Tim the guitar player practicing. It really depends on the comfort level and the spread but I’m trying to get moments that fans would love to see, all without disturbing or annoying the band.” 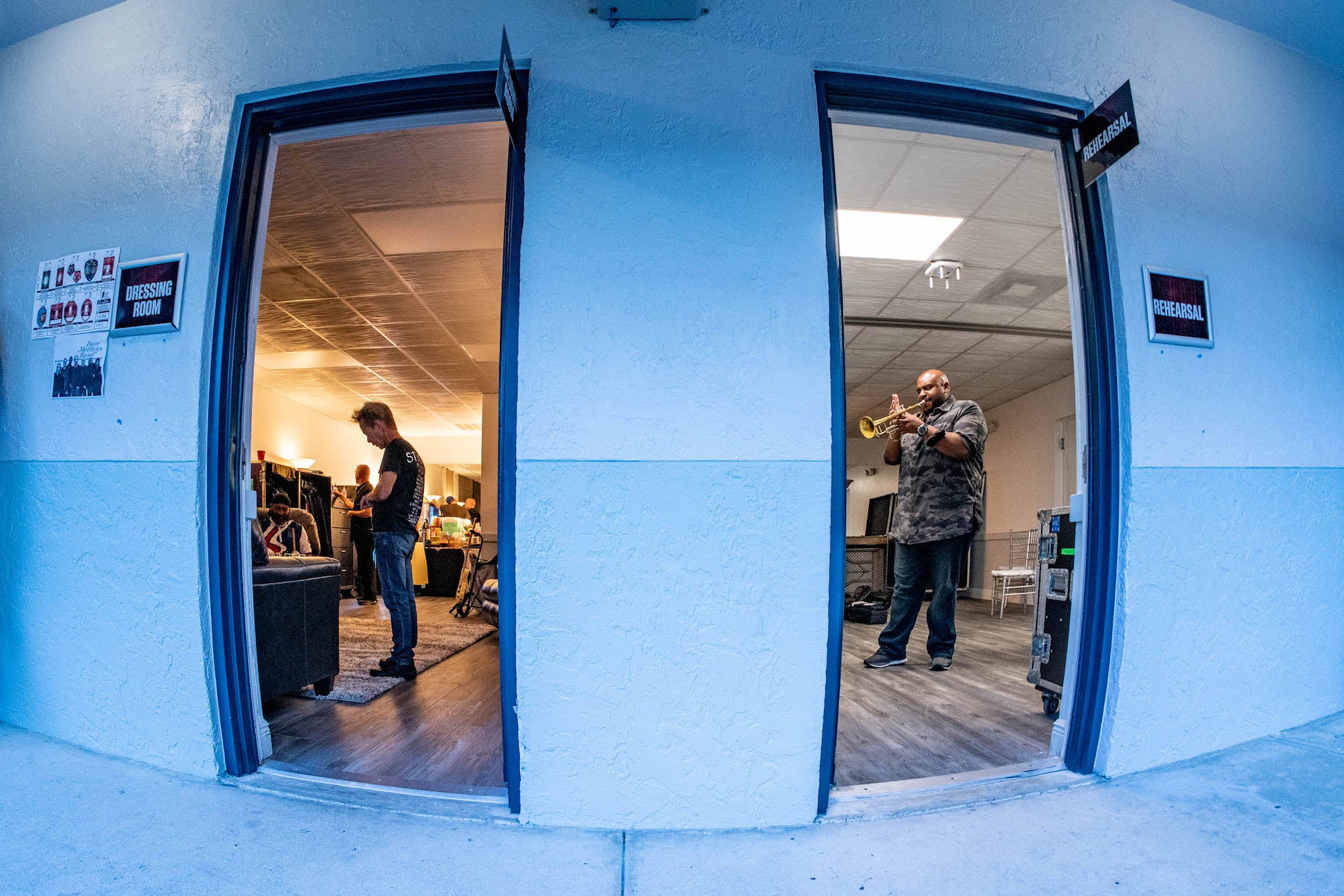 Once the show finally begins, Suchak has his gear ready to go, but he usually lets the first two or three songs play without actually shooting anything. “I don't really do much for the first few songs,” he says. “One, because of the way the lighting for DMB shows works – the screens don't come on and the lighting is a little dimmer. But also the people who have their photo pass to shoot the show are shooting the first two or three songs, so they don't need me competing with space for them on stage or worse, being in their shot. So I just give that time to the people who have their photo pass because they don't get to shoot the whole show like I do.”

Once those first few songs have passed and he is ready to shoot, Suchak says he likes to approach his assignment like a spiral, starting with the safety shots and working his way out toward the weirder ones. “When I start I’ll try to make sure I have a couple good shots of each person in the band – the shots that anyone would be happy to see. Many people forget when they shoot bands that you have to show the whole band and not just the lead singer.” 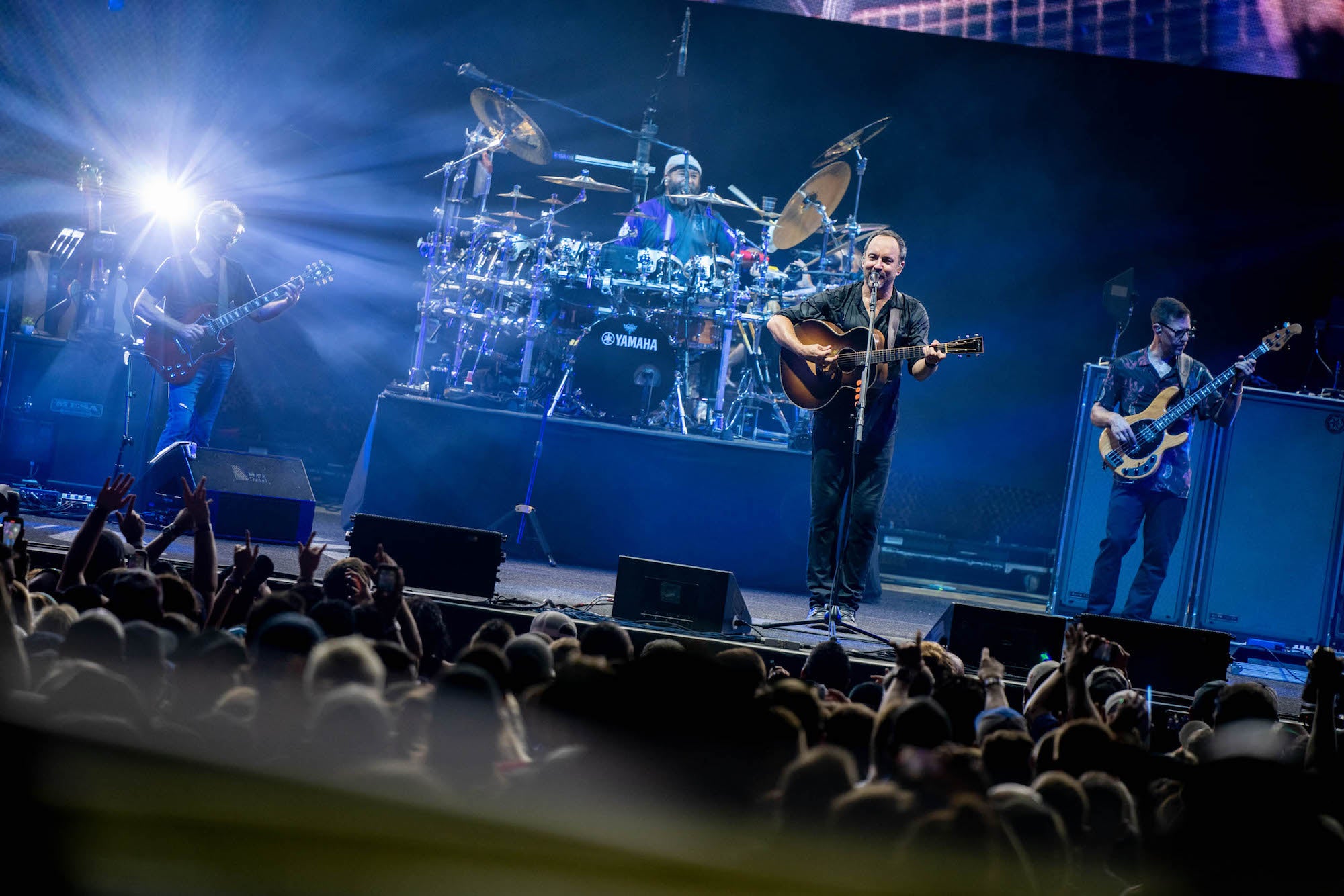 He continues, “Management will especially want to see photos of everyone in the band, and with bigger bands and wider stages it gets difficult. So there are a few spots I identify beforehand that I can sneak into that will give me a good whole band shot that isn't just a straight shot from front of house. If I go in the corner by the keyboards with a wide angle, I can catch Buddy in the corner on the left and it’ll be a relatively proportional, but interesting band shot. I make sure I have at least three to four of those that I'm really happy with, and those are the safety shots.”

Now as he moves outward on the spiral, he aims to get a couple of wide shots at the venue and some of the crowd. That’s where he says the 12-24mm f/2.8 G Master or even a fisheye lens comes in handy. He likes to wait for the lights to do something cool and then slow down the shutter speed to try to get a wide shot of the energy from the fans.

“After those wide shots, now I’m about 3/4 of the way through the spiral,” he explains. “That’s when I can start getting weird with reflections and prisms. That's when I'll start sneaking out on stage a little more and trying to get up in the drummer's face without him noticing or waiting for different band members to interact. All of this is also dictated by the set list and the video assets that play behind them. So I know if it's red I'm not going to shoot too much, although I will say that the Sony Alpha 1 is the first camera I've used and been able to get concert shots with the red light. But I’ll also shoot through things like mesh screens to get dreamy effects and just to make something different.” 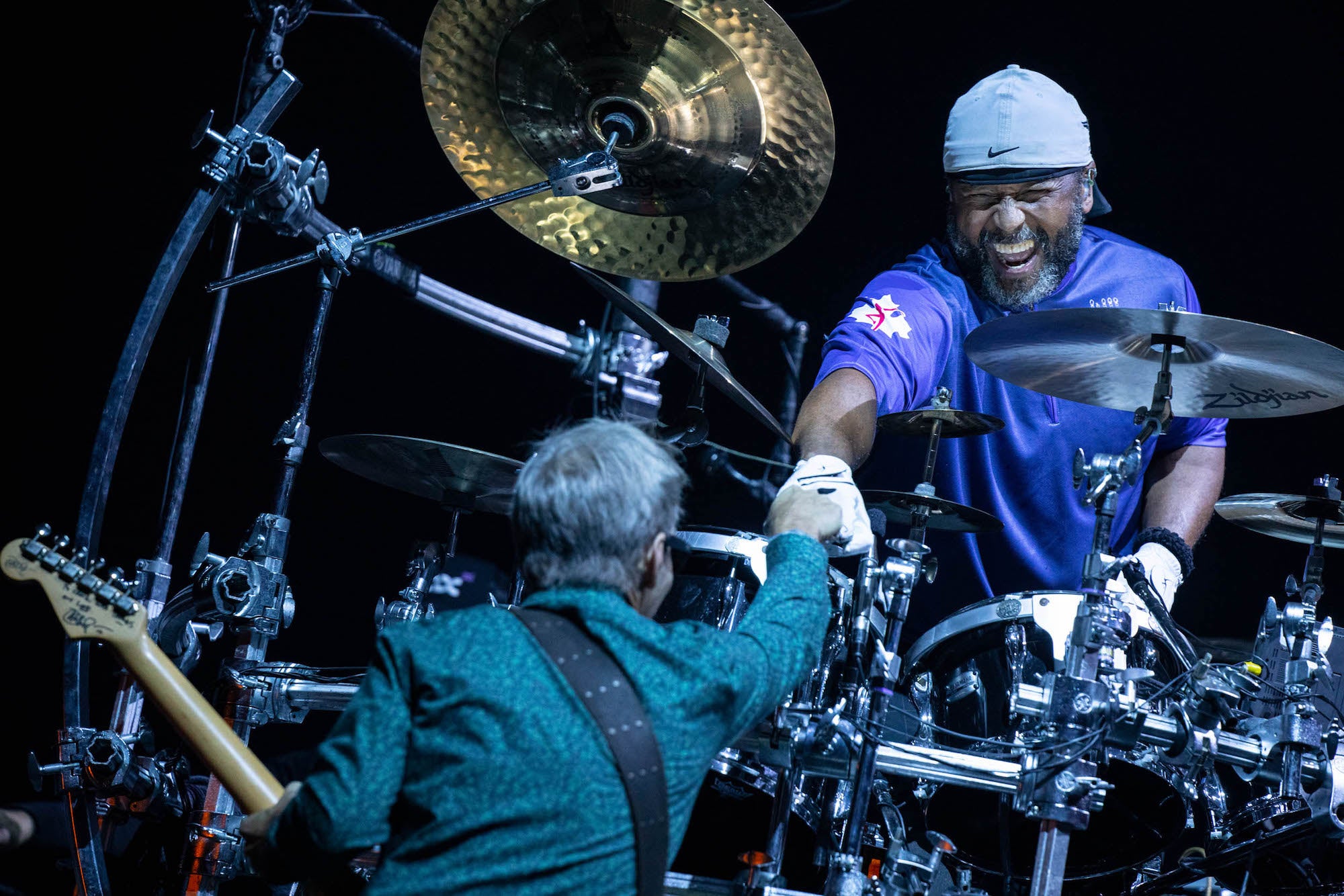 “What makes a good concert photo is something unexpected. I think that with music photography, the most interesting photo you can get is when the musician is not doing what they're supposed to be doing. You can have someone singing at a mic and fine, but that's what you expect them to do. If you think about the legendary music photos out there, like Johnny Cash giving the finger or The Beatles walking across Shea Stadium, those are the ones that stand out. You probably can’t think of an iconic music photo where a guy's just playing a guitar or singing. I try to go for the interesting and unexpected just to give fans an idea of what it might be like to be on the stage with the band, because I get to do that and I want to share that experience with them .”

Alpha 1: Take A Deep Dive Into The Tech Inside

Alpha 1: Take A Deep Dive Into The Tech Inside