I wanted to photograph a rocket launch since I first saw a SpaceX rocket fly over the West Coast in December of 2017. At the time, I was filming a video project on the beach in Ventura when I looked up to find an amazing light show in the sky. It seemed like a normal plane at first with a plume of smoke following behind it. But after a few moments, the clouds grew wider and brighter, eventually filling the entire sky above the horizon with a white glow. It looked as though clouds from a bright, sunny day had been placed against a night sky backdrop.

Photographer captures the dazzling display from a SpaceX Falcon 9 launch in a single frame with Sony Alpha camera. 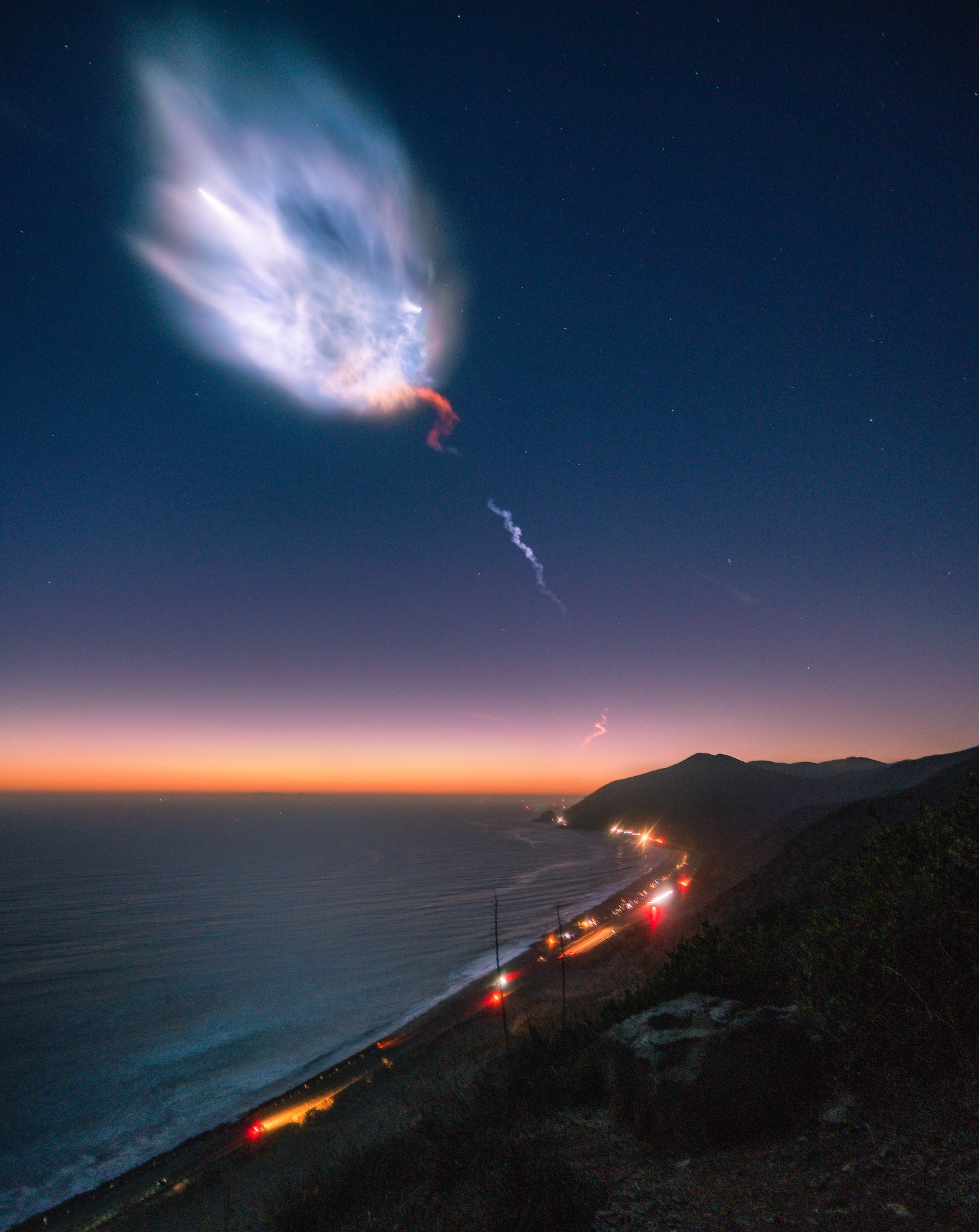 Sony α7R II. Sony 16-35mm f/4 lens. On October 7, 2018 at 7:21 p.m, SpaceX launched their Falcon 9 rocket to the amazement of onlookers throughout California. As the rocket launched from the Vandenberg Air Force Base and soared above the California Coast, the dark sky turned into a bright white glow that could be seen for hundreds of miles.

When I heard that SpaceX would attempt another West Coast launch in October 2018, I knew I wanted to try to capture as best I could above Los Angeles. I began to look at some of the best locations for the launch based on the rocket flying from the north. I eventually settled on shooting from the northernmost point of the Santa Monica Mountains because this would be a great vantage point overlooking Pacific Coast Highway with the Pacific Ocean in the background. Getting up higher in the mountains also helped in getting a wider view of the rocket as it traveled through the sky.

On the day of the launch, several friends and I put on headlamps and set off on a hike up a dirt trail to the overlook spot. As we hiked, we followed along to the live SpaceX broadcast to get an idea of when the rocket would launch and if there would be any last minute delays. After 30 minutes, we reached the mountain peak and quickly set up our tripods facing north as we waited for the launch countdown to start at Vandenberg Air Force Base. We could hear the 3, 2, 1, countdown on the broadcast just as the rocket began to peak above the Santa Monica Mountains.

I used my Sony Alpha α7R II camera for this launch with my Sony 16-35mm f/4 lens attached. My goal for this shoot was to capture the rocket in a single exposure, without using any compositing or photo manipulation for the foreground. The challenge with this was to balance the lack of light with the relatively short shutter speed to get the rocket sharp in the frame. For most night photography, it's not uncommon to set a shutter speed of 30 seconds (or longer) so the camera can pick up as much ambient light as possible. In this case, however, a slow shutter speed would result in the fast moving rocket being a blur.

To compensate for this, I increased the camera ISO to 1000 and settled on a shutter speed of two seconds. This would allow me to balance light gathering, freezing the rocket in flight and keeping the noise low. Also, I was using shooting at f/4 which gave me a little more depth of field while requiring a slight bump in ISO. People worry a lot about noise, but it's really a good tradeoff to boost the ISO to get a faster shutter speed in a situation like this since a sharp image with a little noise is much better better than a blurry one with no noise. And besides, at ISO 1000 the α7R II is pretty much noise free. Setting the lens' focal length to 16mm also allowed me to get a wide angle view of the scene, while still having the ability to crop in slightly if I needed a closer view of the rocket.

As the rocket launched from the Vandenberg Air Force Base and soared above Los Angeles, the first stage separated from the second and continued on its path out of the atmosphere. The second stage meanwhile made an amazing flip maneuver called a ‘boostback burn’ to return to the landing site. To do this, the second stage used its own three engines to slow the rocket down enough to eventually land back on the ground.

We listened to the SpaceX broadcast as the commentator detailed all of the stages the rocket would go through. When they announced the ascent phase, we could begin to see a small white streak form just above the horizon. This cloud began to grow in size until the dark night sky was filled with the bright white cloud. At this point, I took the photo just as the first and second stages separated and traveled in two different directions. If you look closely in the picture, you can see the second stage heading back to Earth as the first stage continued on its path.

Overall, this was one of my favorite night shoots. The challenge of finding a spot to get a good view of the rocket, capturing it in focus and tracking the fast moving rocket made the whole experience incredibly rewarding. I recommend anyone on the West or East Coast watch and photograph the next rocket launch for themselves. It's amazing to see how far technology has progressed where these reusable rockets are able to launch on a regular basis. Check the SpaceX website for updates on the launch schedule.

How To Photograph Twinkling Holiday Lights

Jason Frankle is a member of the Sony Alpha Imaging Collective. Follow all of their adventures on Instagram https://www.instagram.com/worldpins/.

How To Photograph Twinkling Holiday Lights