My name is Soham Das (@mountainswildlifenmore) and I am a landscape and wildlife photographer, originally from India, currently living in Seattle, WA. I work as a software engineer at a tech company based in Seattle as part of my day job. Barring the weekly 40 hours, you would find me outdoors shooting landscapes and wildlife. Photography has been my passion ever since I was a kid. How a single captured moment could provoke a wide range of thoughts and interpretations in the minds of the viewers always intrigued me. It started off with playing around with my dad's old reel camera back in the day (1990s) to buying my first DSLR and the interest grew each time I held the camera. Winning accolades at the university photography competitions encouraged me to become even more passionate in my journey as a photographer. Over the past couple of years, I have become an avid Sony mirrorless shooter. Some of my recent trips with the Sony gear to Masai Mara (Kenya), Glacier National Park and parts of the beautiful Pacific Northwest (OR, WA) have been quite enriching photographic experiences. 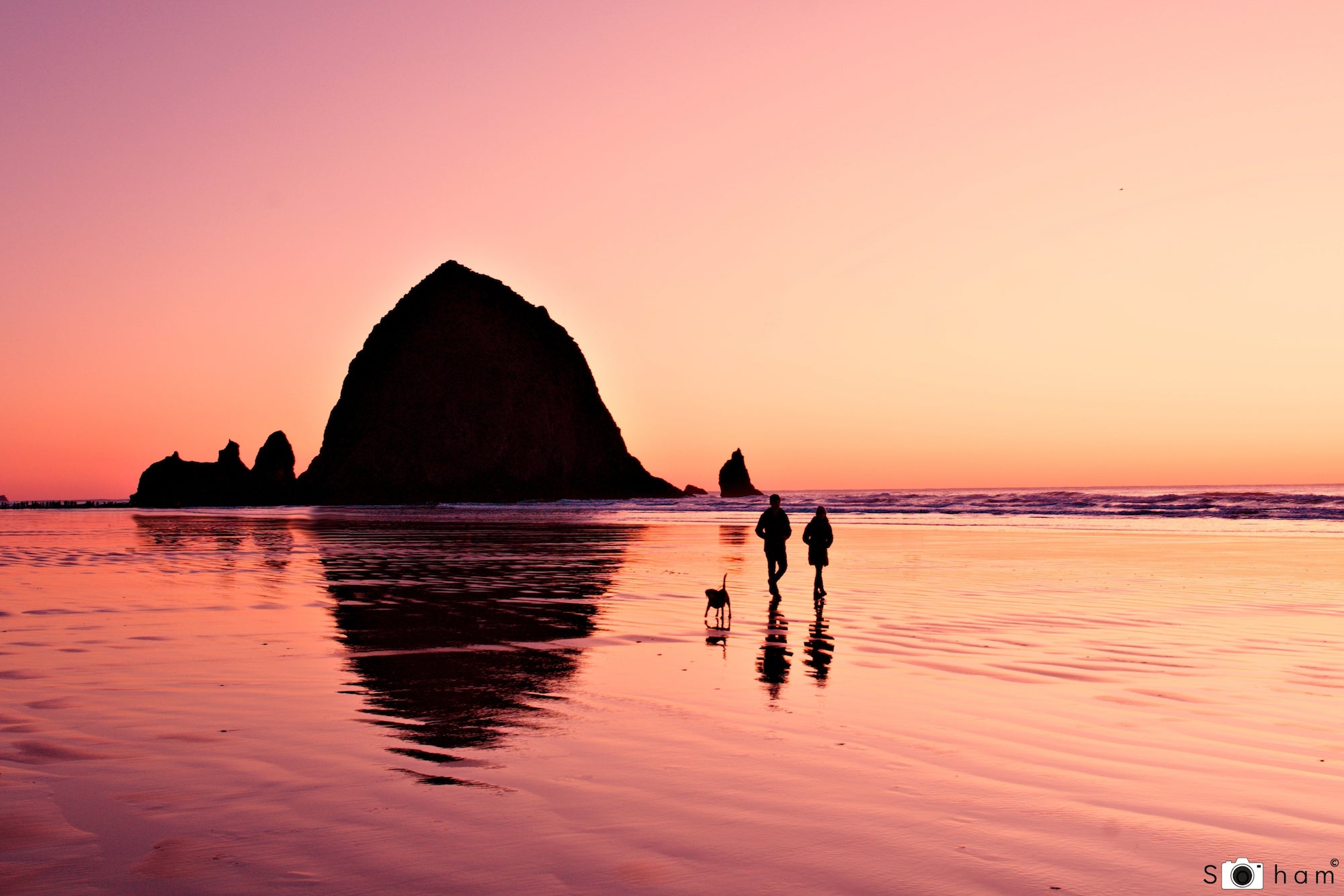 This photo was taken at the beautiful Cannon Beach in Oregon on the Pacific coastline. I was planning to capture a sunset shot at Cannon Beach for quite some time and was on the lookout for the low-tide timings. I finally got the opportunity during this last Thanksgiving weekend. We had not planned a Thanksgiving trip beforehand and were gearing up to cook a sumptuous Thanksgiving dinner at home. But my itchy feet never let me settle, glad it doesn’t. Usually during this time of the year, the weather in the PNW often plays spoilsport. Luckily, that was not the case this time. The low tide timing was also on our side and off we drove. We explored the Ecola State Park, did the Clatsop loop trail to get a glimpse of the Tillamook Rock Lighthouse before heading down to Cannon beach for the sunset.

I shot this with my Sony α7 III and Sony 24-105mm f/4 G lens on my tripod. The 24-105mm f/4 G has been my go-to lens for most of my landscape photography these days. This lens is wide enough for most landscape shots and offers a great zoom range. F/4 is enough for landscape shots for me. A tripod is always recommended while shooting landscapes at low light conditions for sharp results. This was shot at 35mm, f/8, 1/80-sec, ISO 500 in the manual mode. I could have used the 70-200 for a tighter shot, but I felt that 35mm was perfect and suited the scale of the shot I had visualized. I used f/8, because I wanted everything in focus – the rock, the couple and finally my leading lines. Since the couple was moving somewhat laterally, 1/80-sec. was just enough to keep the photo sharp, while not under-exposing the overall scene.

I had checked the sunset time beforehand and done some preliminary research to have an idea of the composition. We arrived at the scene an hour earlier than the scheduled sunset time. This gave me enough time to figure out the exact location I would like to take the shot from, set up my gear- camera and tripod, adjust my camera settings and take a bunch of extra shots to gauge the light. Cannon beach is usually a very busy spot especially on a sunny day and people gather close to the base of Haystack rock. Since it was low tide it was tempting to get to the base, but I had other plans, of course. The extra time helped me to choose a location away from the base, from where I could take the shot avoiding the crowd as much as possible. The low tide in the Pacific had drenched the sands for a near-perfect reflection of the stunning Haystack rock on the beach. The receding ocean water had left beautiful linear patterns on the sand which added the leading lines to my composition drawing the viewer to the Haystack rock – the main subject of the photo.

I planned my composition following the well-studied rule-of-thirds, where I wanted to keep the Haystack rock on the left and to add some balance to the photo by having some human presence on the right. The latter, in my opinion, added a perspective of scale (of the rock) to the shot. Right after sunset on the onset of the blue hour (one of my favorite times to shoot landscapes), I found this couple walking their dog on the beach. The last rays of the sun backlit the rock and created this silhouette which I have been looking to capture all this time. It was a picture-perfect frame for me, just the way I had visualized my composition and I clicked the photo.

Typically, I avoid doing a lot of post-processing on my shots. I feel that sometimes over-editing a scene might mess up the natural tones, which may not be desired. For this shot, I used Photoshop to slightly adjust the shadows and highlights. Since this was a sunset scene, I used the Warming Filter on Photoshop to add some more warmth to the scene to get the perfect tones for the shot.