At the end of every year, I always enjoy going through my photos and picking some of my favorites. It’s a fun exercise. And I inevitably end up finding some photos that I may not have thought much of at the time, but I really like now. If you haven’t already, I encourage you to try it. I think you’ll enjoy the process.

2016 was an interesting year of photography for me. While I enjoyed my photography (probably more than ever) this past year, I don’t think I made my best photography ever – but I’m still really happy with it. Why you ask? Partly because I didn’t travel like crazy – like I used to.

I’ve done my share of traveling over the last 15 years. It’s kind of interesting – traveling is almost like a badge of honor for many. People talk about their frequent flyer miles and their upgrades with pride – I know I did. But I definitely started feeling the effects of it. And more importantly, my wife and kids really started feeling it too. It wasn’t good (for any of us) for me to be away that much.

But for the last couple of years I’ve been lucky in having the opportunity to hold back on how much I’m away from home. I was able to shift my income from seminars/workshop that I need to travel to, to more online training. And today I say no to many more trips than I say yes to.

Overall I think I did a pretty good job of balancing in 2016. I can proudly say I didn’t make the top tier of Delta’s frequent flyer program. I didn’t make any tier of any hotel chain, or car rental company. And I can even more proudly say that my wife/kids are most likely tired of seeing me around the house (and yes, that’s a good thing)

Even though I traveled much less, I did have a few great opportunities for photography in 2016. First off, my wife and I went along with some friends to Iceland last February. Airfare was cheap. And we were able to split the costs with 7 others to make an amazing trip more affordable. It was great! No work – just photography and traveling around.

I also had some teaching opportunities in Chicago, New York, the Great Smoky Mountains, and Costa Rica. And I was able to come back with a few keepers from each one of those places as well.

One thing that less travel and photo trips has led to, is me trying to make great photos near my home more often, and try to make a nice photo in some of the non-exotic places I did travel.

Most photos were taken with the following equipment. You can always see more on my Gear page as well.

And finally, a few were taken with my iPhone. I took (and published) more iPhone photos this year than any other time. I love it!

The tripod I use the most now is the Really Right Stuff TVC-24L. I’ve switched over to it (from the TVC-33) now that my gear is smaller. And I use the RRS BH-40 Ballhead.

As for filters, I didn’t use many this year, but when I did I usually put on the Vu Filter system that I wrote about here.

AND NOW…MY FAVORITE PHOTOS OF 2016

Okay, here goes. Here’s my favorite photos of 2016. Click on any photo to see it larger. And if you’re wondering how these photos made this category, it was simple. They’re my personal favorites. I didn’t ask anyone about them. I didn’t look at likes or favorites or anything if I posted them on Social Media. They’re just photos that I’m particularly fond of for some reason or another. And since I don’t make a living from selling my photos to others, I’m pretty sure that’s all that counts these days. 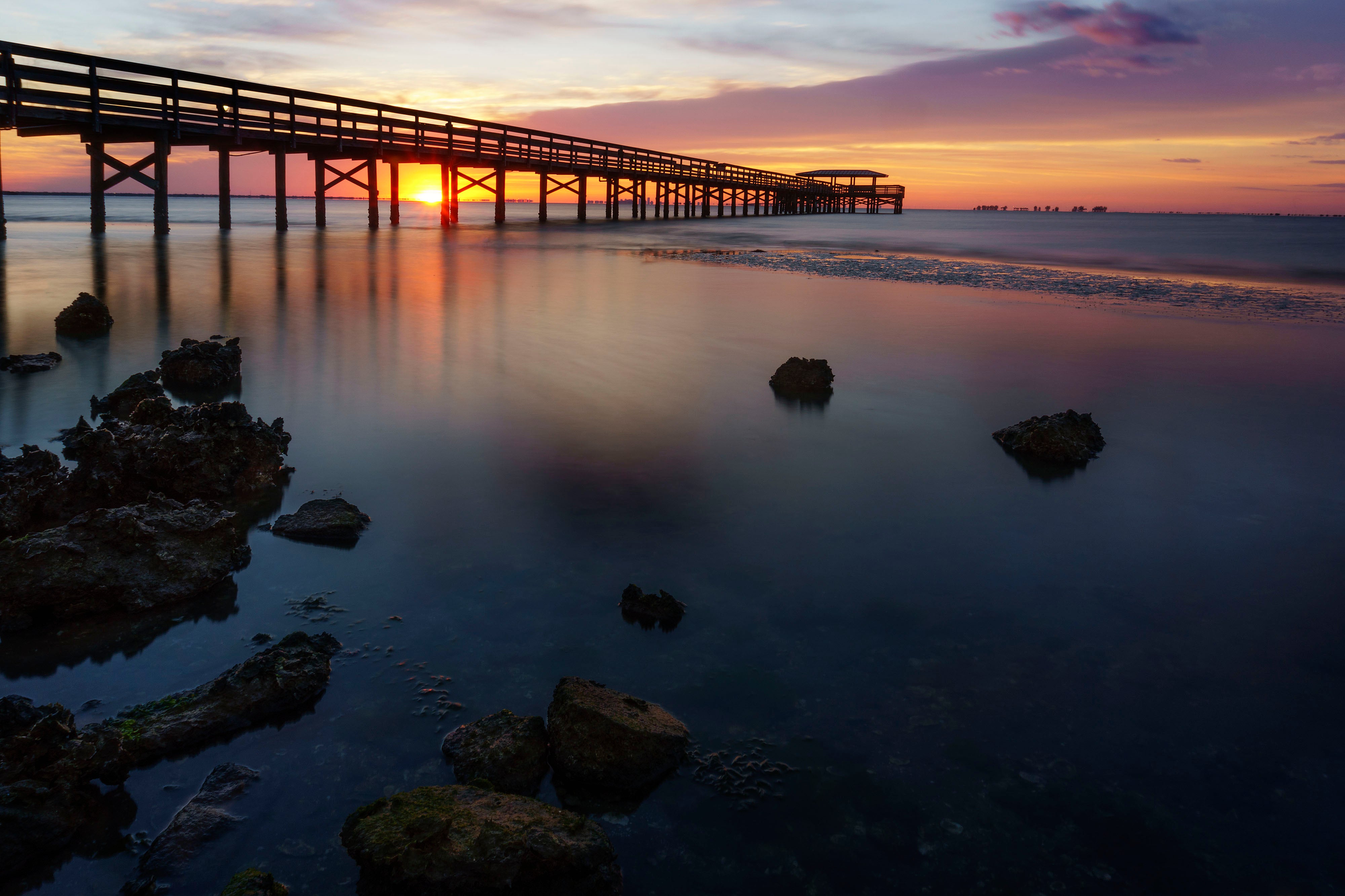 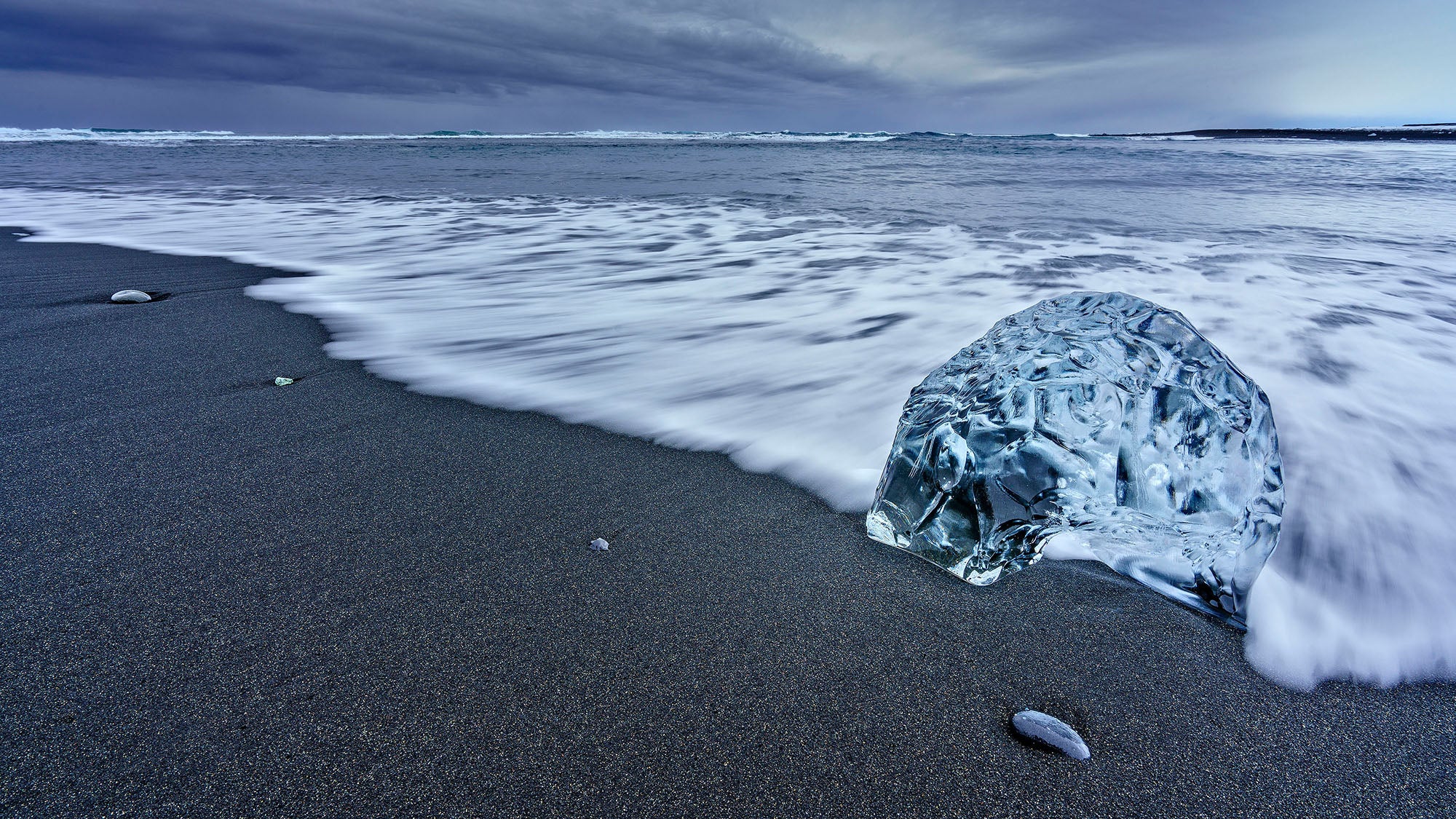 Jökulsárlón (Iceland) Sony α7R II, 16-35mm f/4, f/16, 1/10, ISO 50 – This was taken on the beach here in Tampa LOL! Yeah right. The only ice on our beaches come from a cooler. This one was actually taken at the popular beach in Jökulsárlón Iceland. You’ve probably seen 1000 photos of ice on beaches in Iceland by now. It seems they’re as common as anything these days. Sadly, the day I was there it was cloudy and this was the only piece of ice on the beach (sometimes there’s hundreds of them). I’ve seen many better from this location, with the sun shining through the ice and nice warm colors – this isn’t one of them but I still like it. 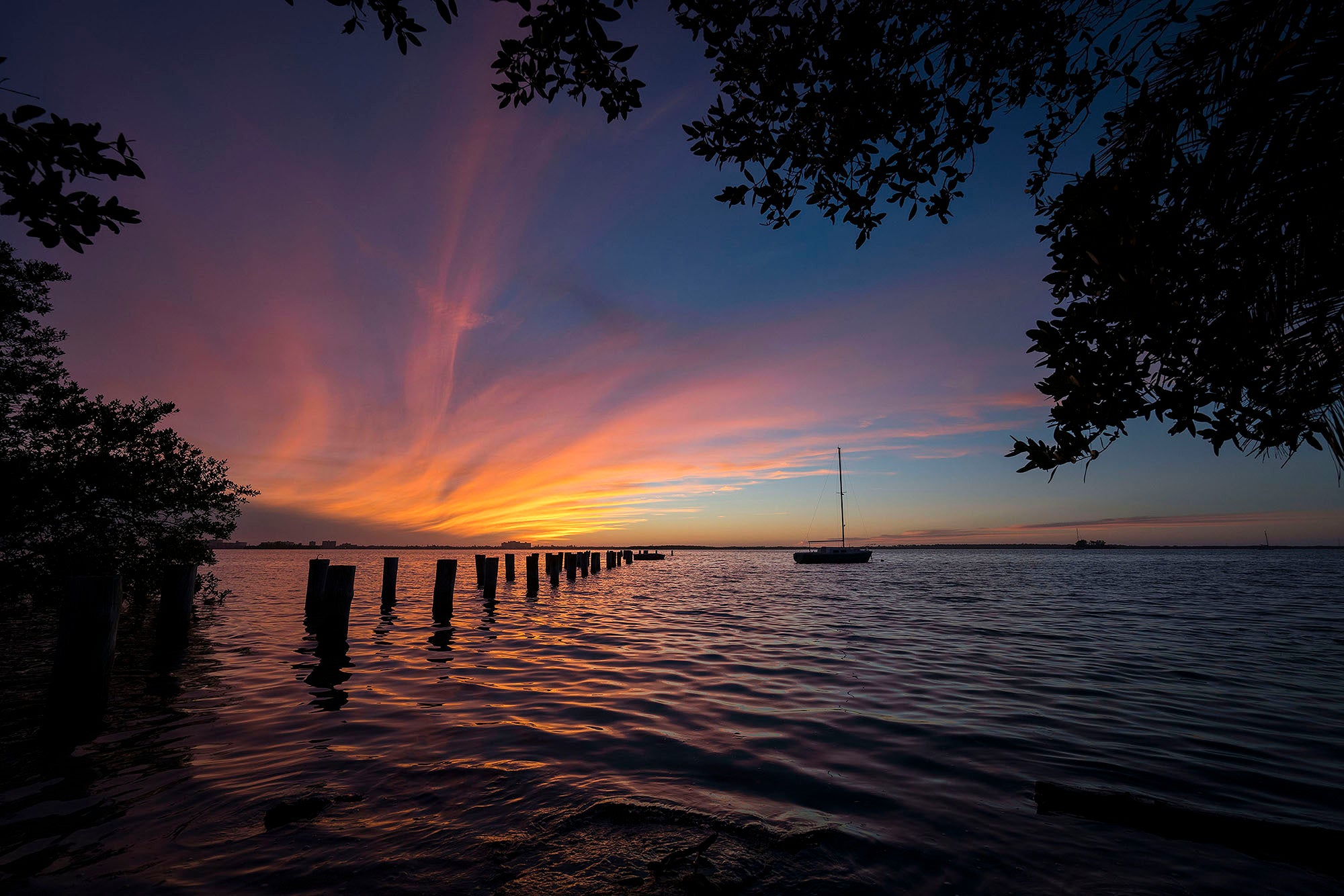 Dunedin Sunset (Sony α7R II, 16-35mm f/4, f/5.6, 1/100, ISO 400) – Probably one of my favorites from 2016. And it was taken a spot I’ve photographed many times in Dunedin, FL. This was right before the Iceland trip and I had taken my wife with me to get her familiar with her camera for the upcoming trip. The sunset didn’t look like much, but it definitely delivered at the right time. I photographed it from a location and in a different way than I had before, and it’s now one of my favorites. 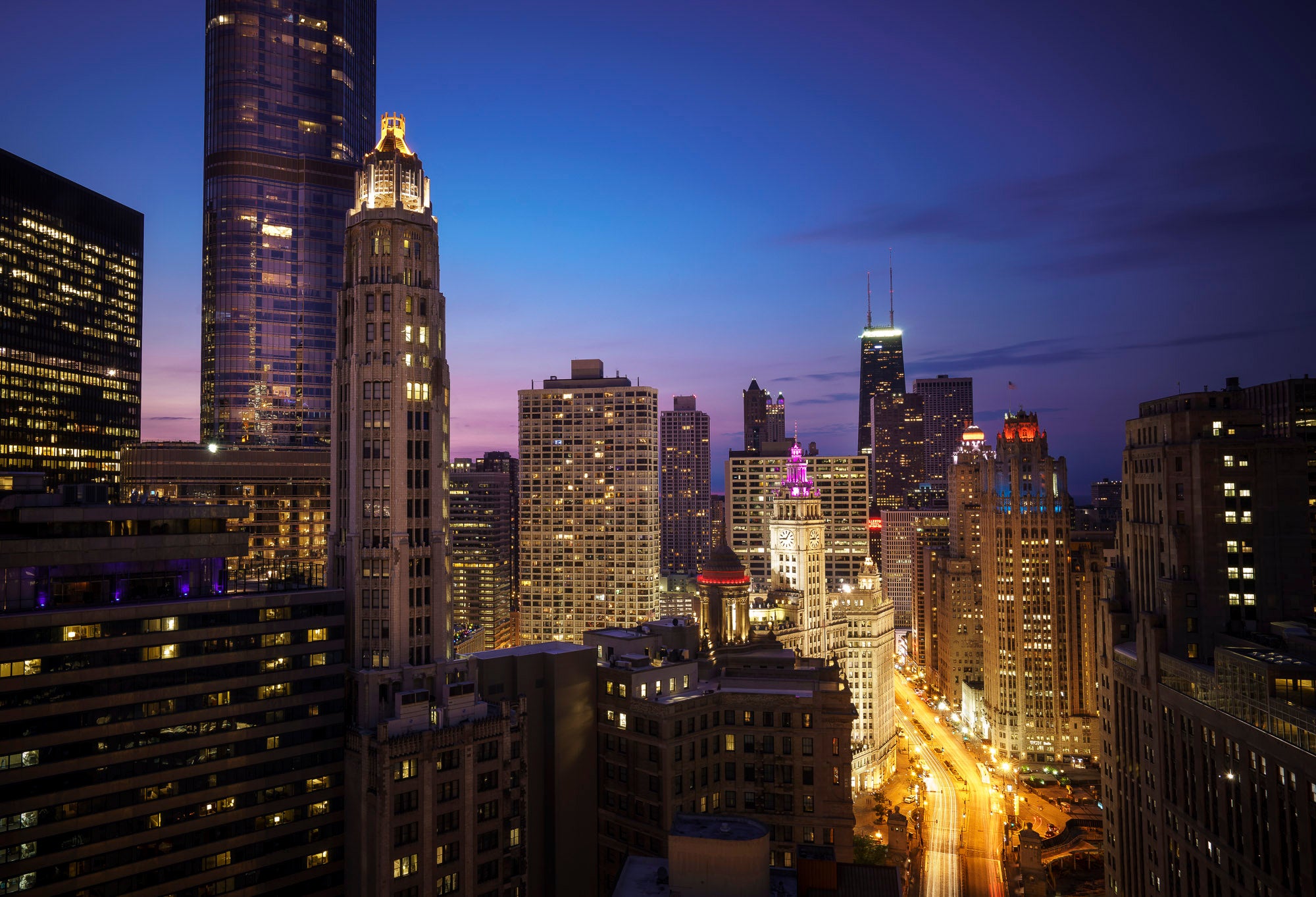 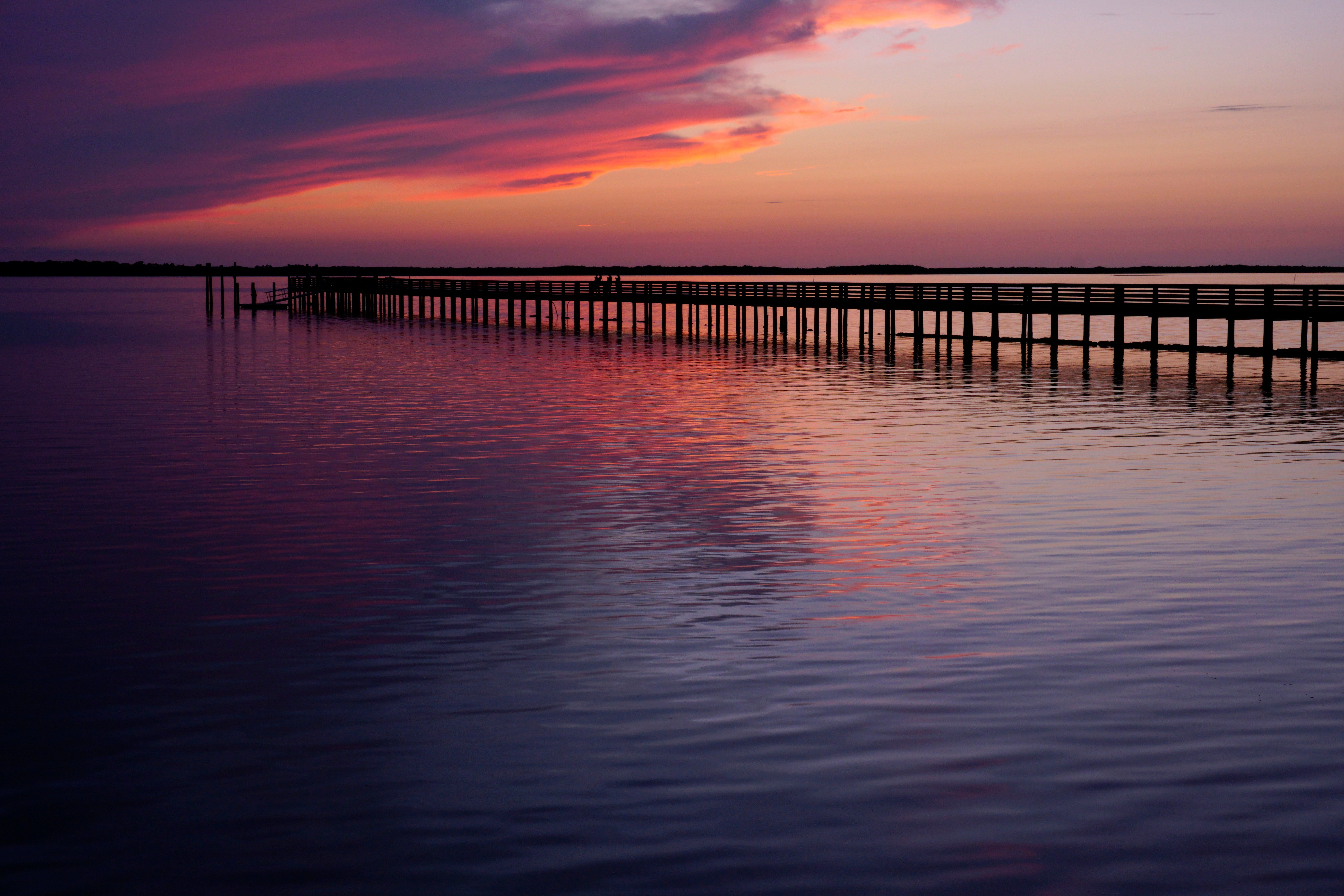 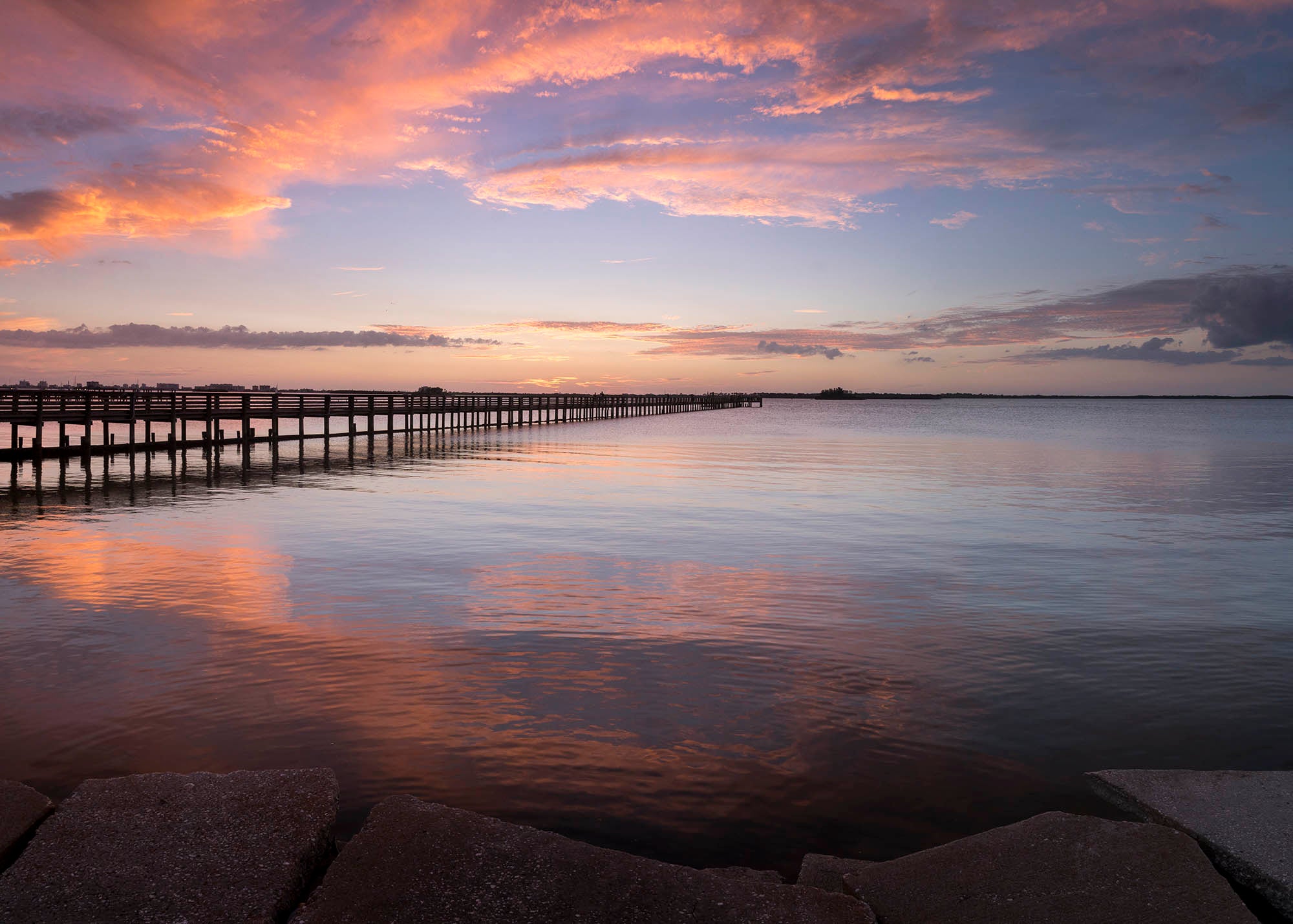 Dunedin Sunset (Sony α6300, 16-70mm f/4, f/11, 1/40, ISO 200) – Remember when I said I was forced to shoot around home more often. Well here’s a couple from Dunedin, FL. Just up the road from the previous location. I had actually never been to this spot before either. It doesn’t have a lot of the things I look for in a great landscape. The foreground isn’t particular extraordinary, but I just love the colors I get when I shoot there. 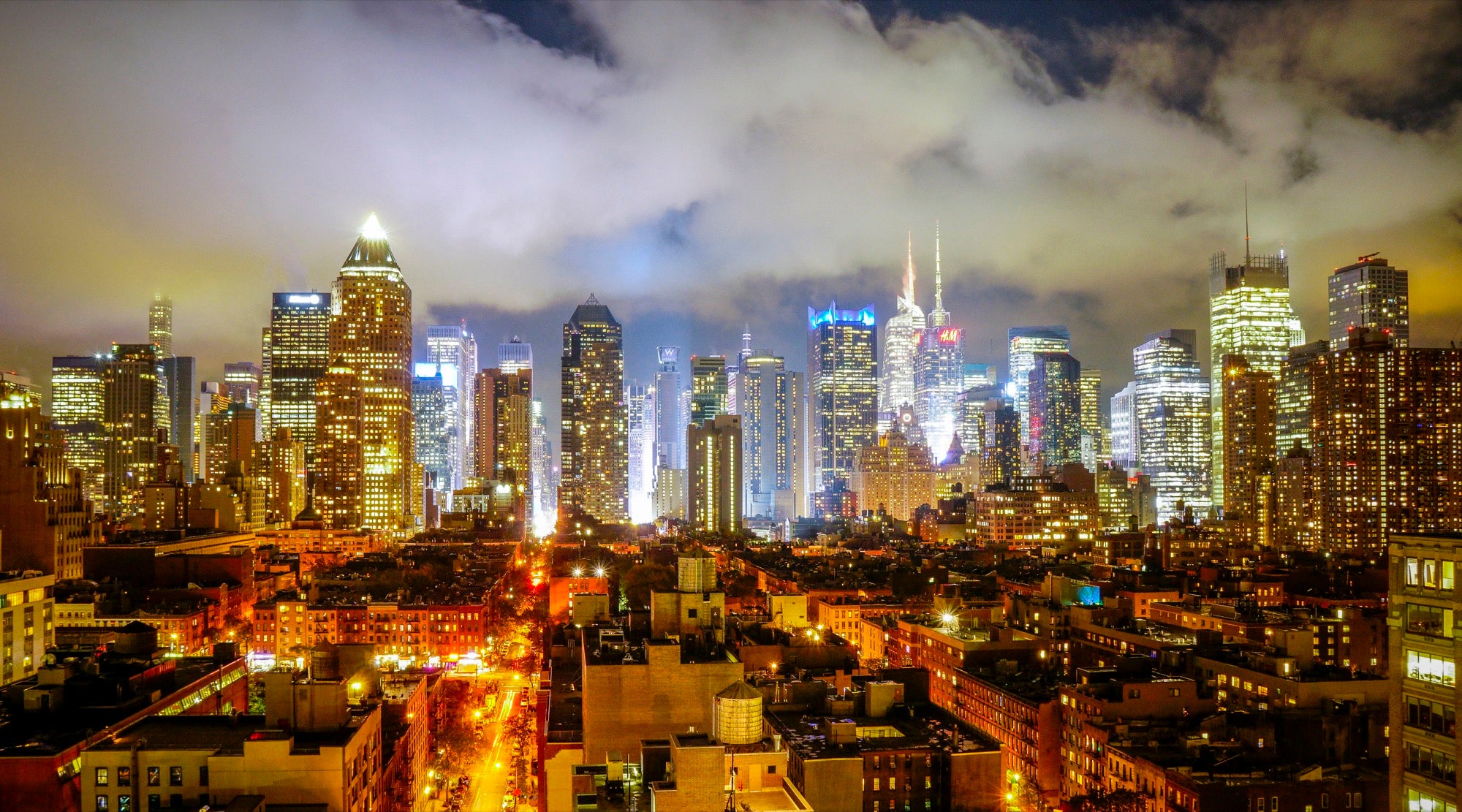 New York Rooftop at the Ink 48 Hotel (Sony α6300, 16-70mm f/4, f/8, 3.2 seconds, ISO 800) – This was taken in October while I was teaching at the PhotoPlus Expo in New York. The hotel we stayed at had a nice bar on the rooftop. They didn’t allow tripods, but I was able to pull out my Platypod and make a sharp photo. I wrote a little more about it here if you want to read the story. You can watch my presentation in the Sony booth on Making A Splash: Use Water In Your Photos here. 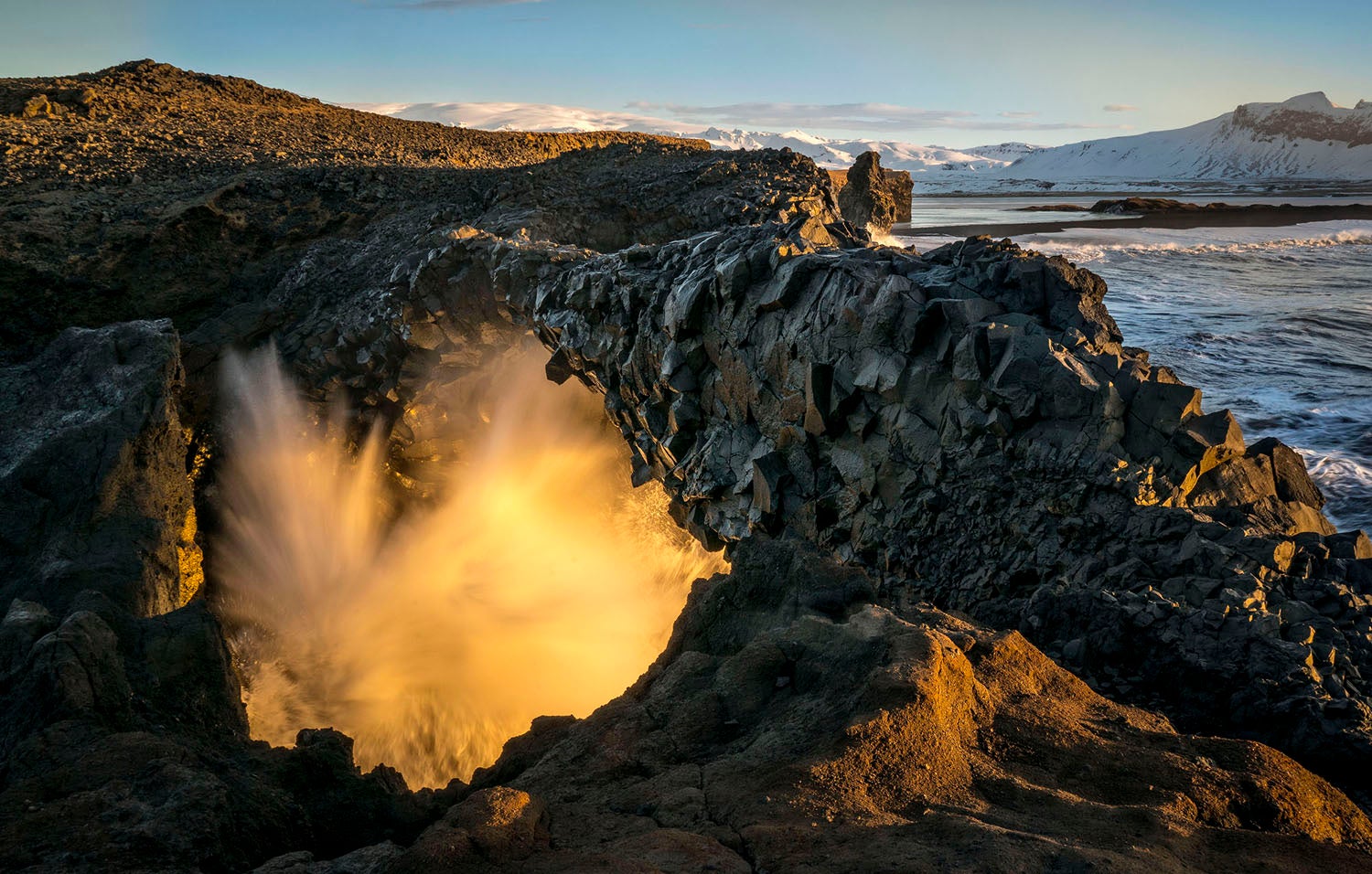 Dyrhólaey Iceland (Sony α7R II, 24-70mm f/4, f/22, 1/10, ISO 100) – This is one of my favorites from the Iceland Trip. The sun was coming up and casting some gorgeous golden light on this little arch. With a little bit of timing, you can catch the waves crashing against the rocks and the sun lighting up the splash that it made. 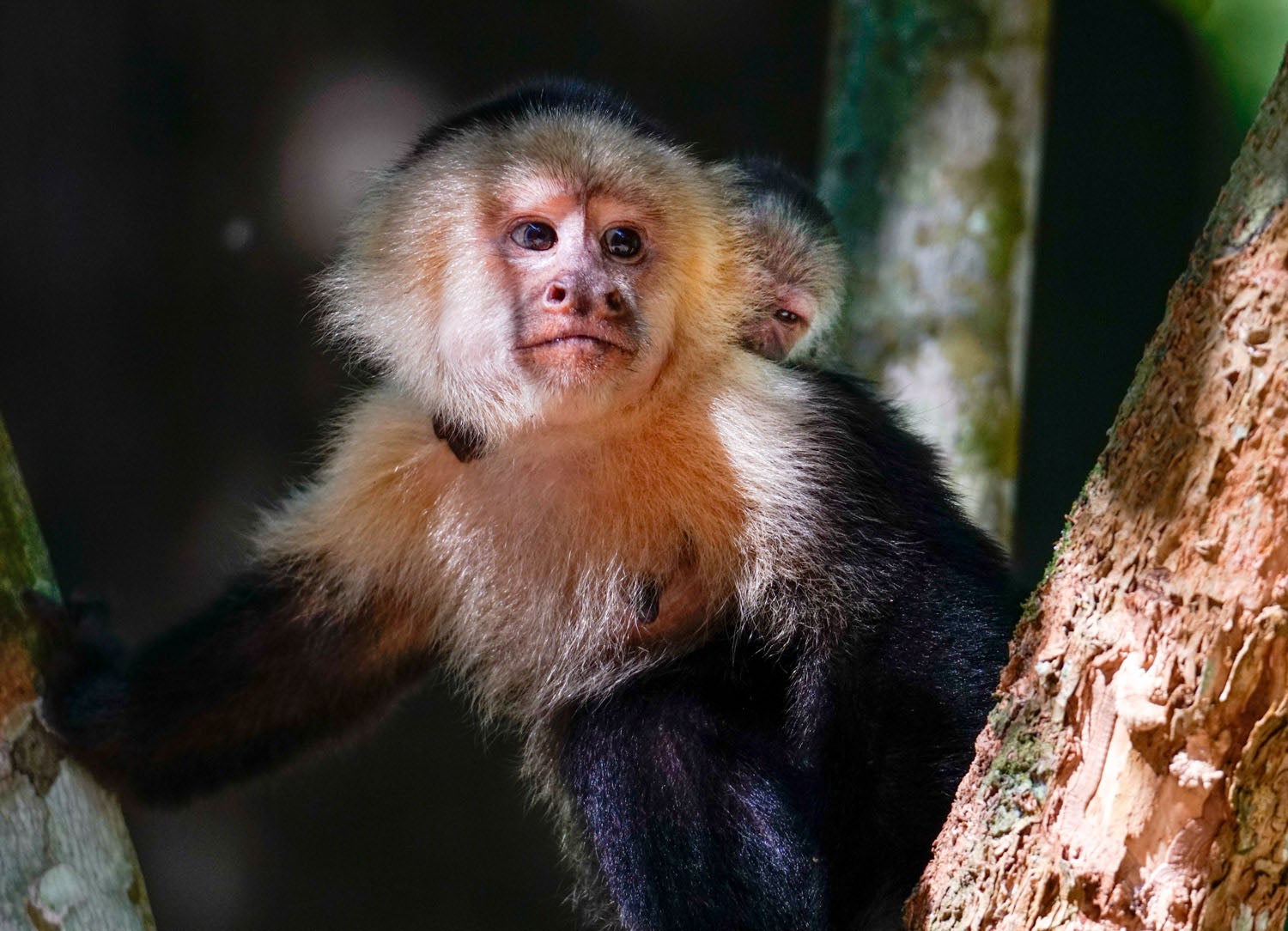 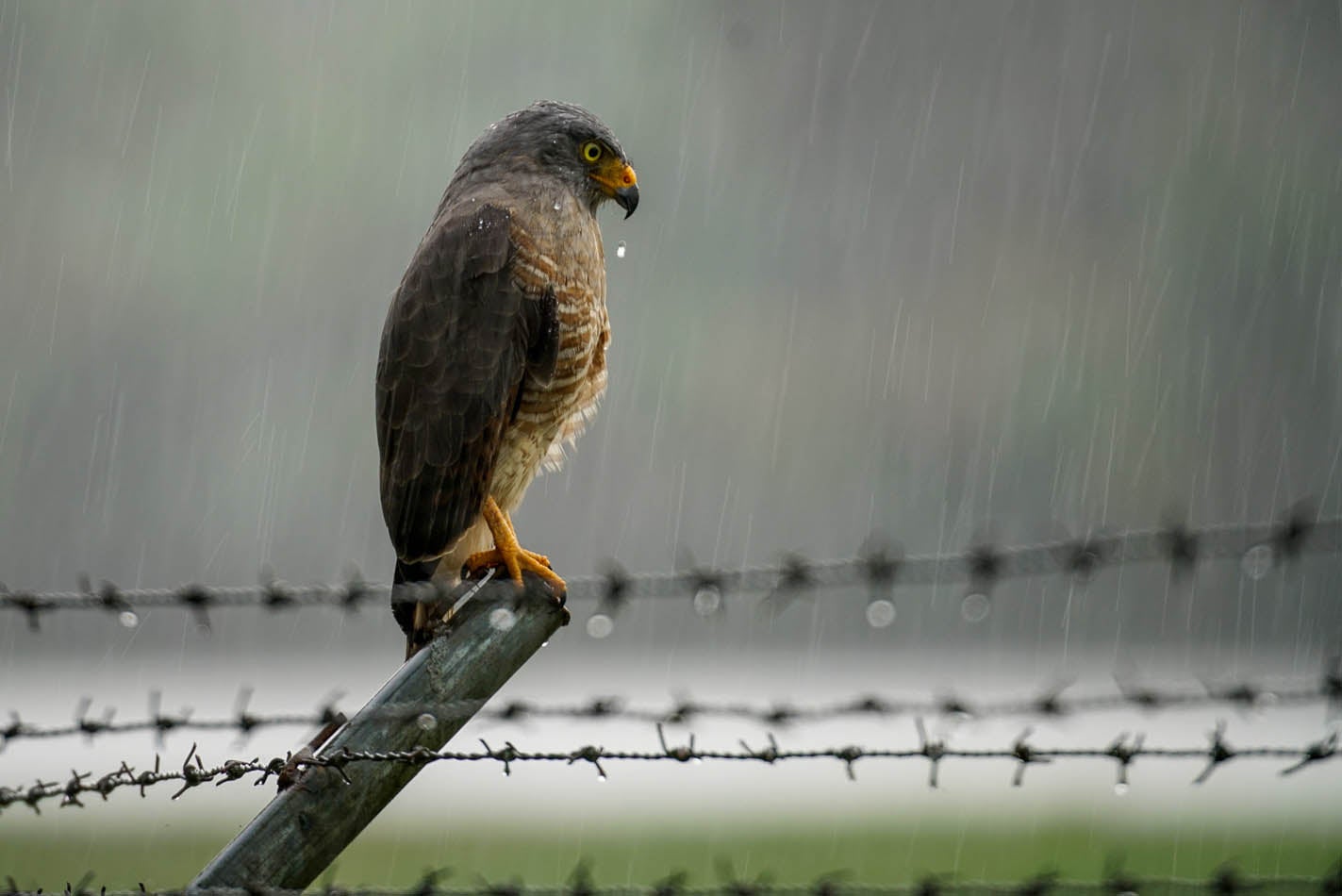 Costa Rica Wildlife (Sony α7R II, 70-200 f/2.8 G Master with 2x Extender, f/8, 1/100, ISO 100) – There’s two photos for this one…Something really interesting happened during my trip to Costa Rica. I became more interested in wildlife photography. I’ve never much been in to photographing wildlife, but on this trip, I really started to enjoy it. On this day, we came across these monkeys that seemed to pose for us at times. So cool! And on the drive back, it started raining and I grabbed the photo above. 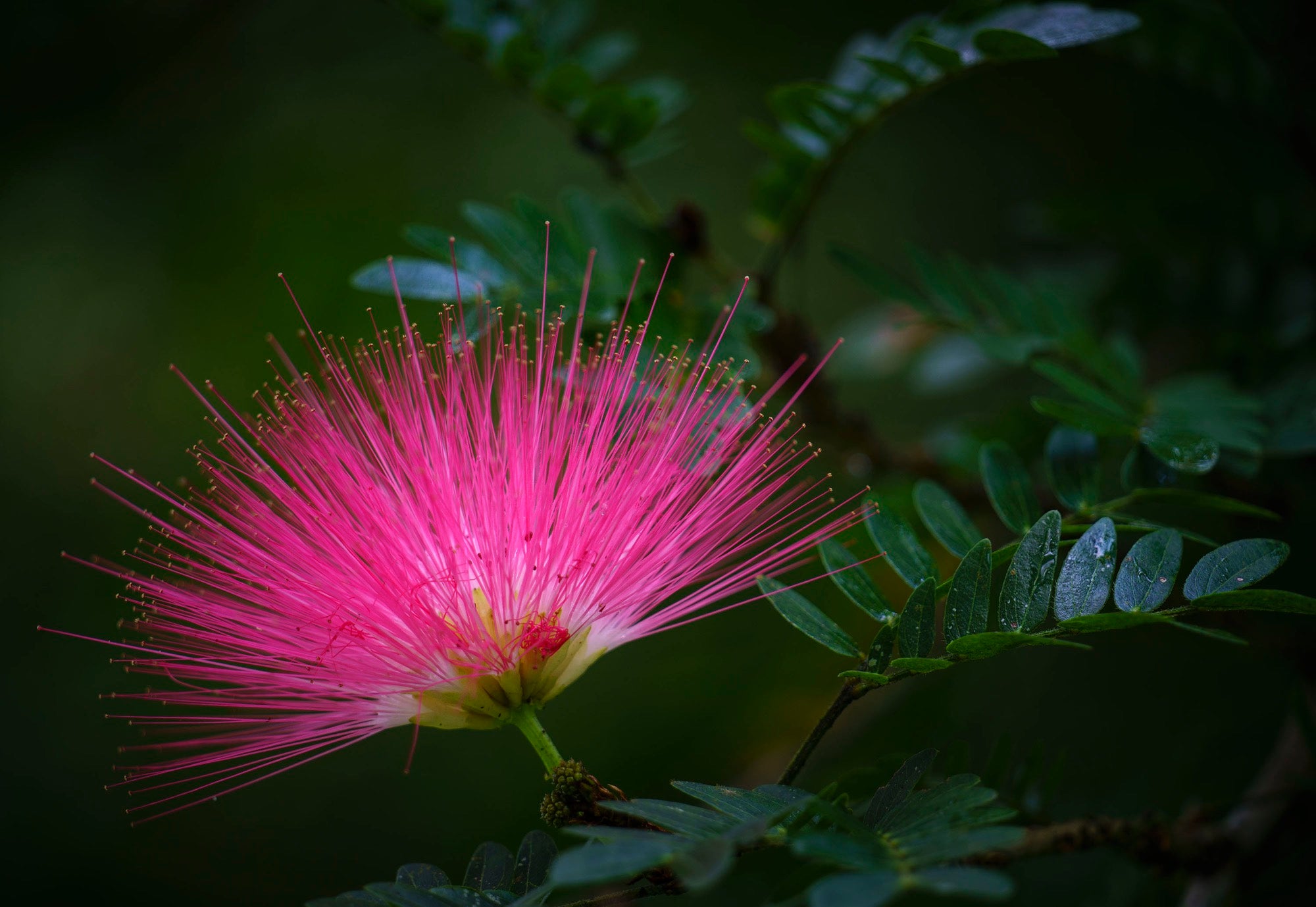 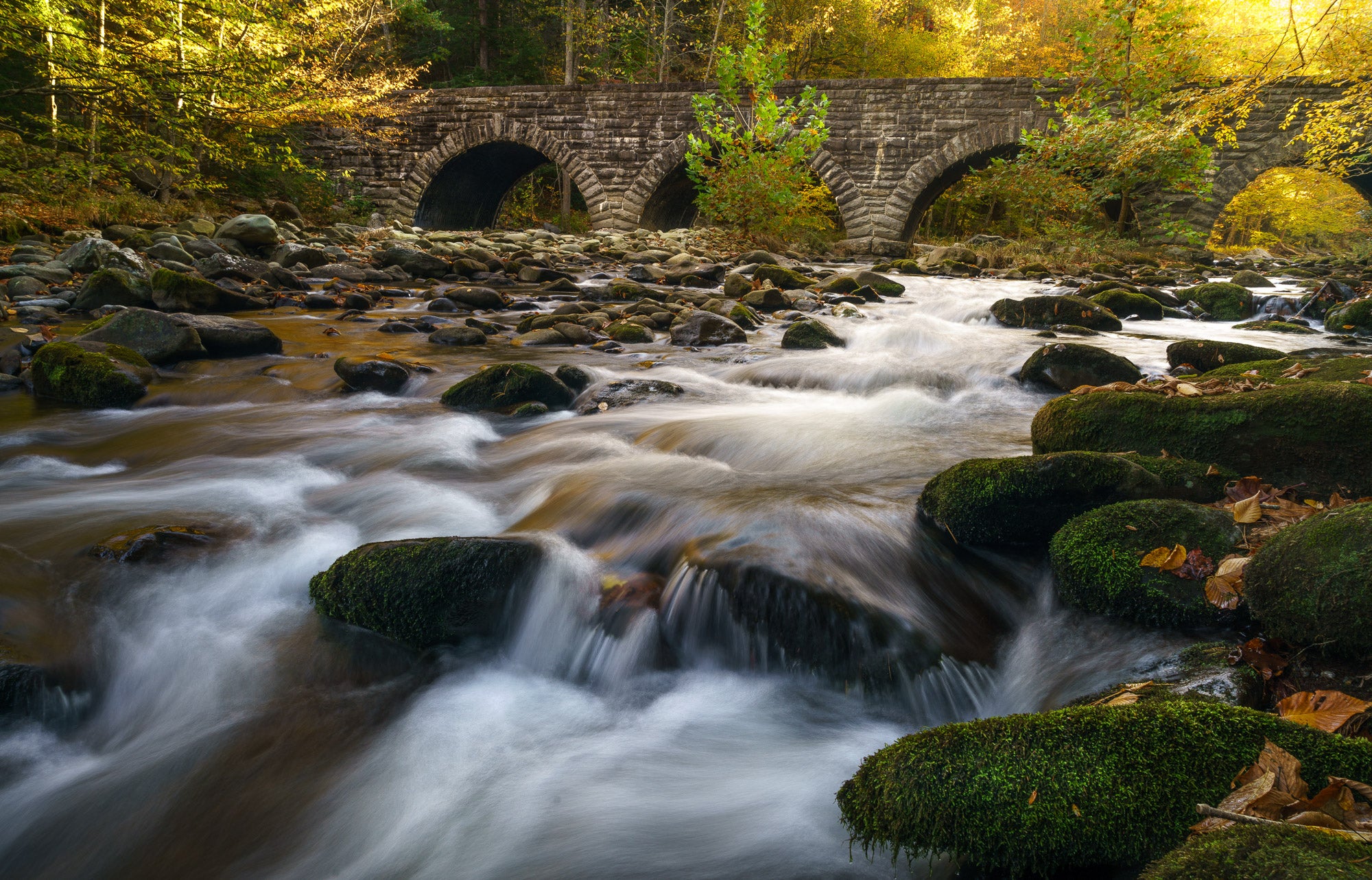 Elkmont, Great Smoky Mountains (Sony α7R II, 24-70mm f/4, f/8, 1/100, ISO 100) – I taught at the annual Great Smoky Mountain Photography Summit again this past October and managed to grab this photo one morning. I love the way the sun coming up lights up the trees, along with some nice rocks and water in the foreground. 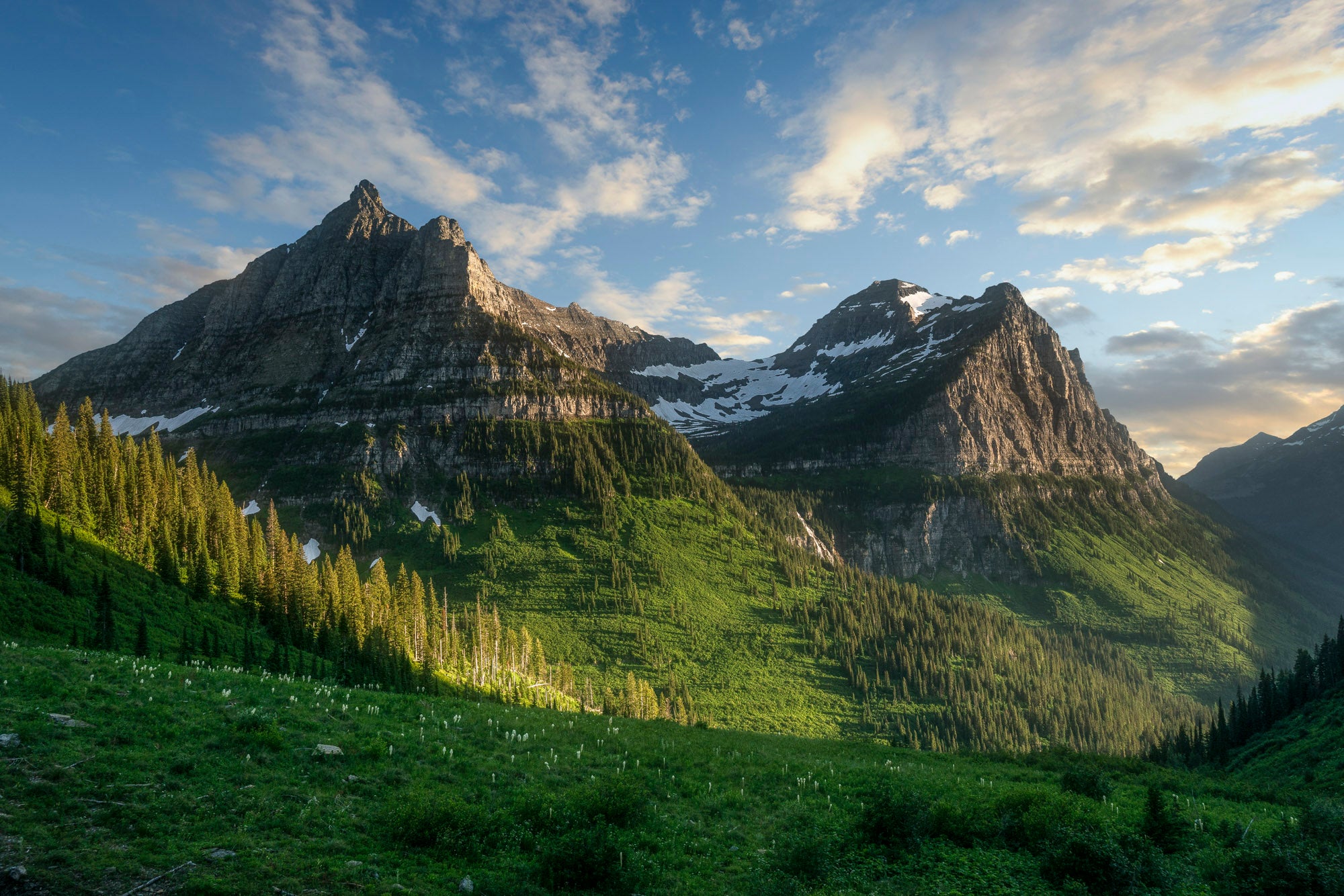 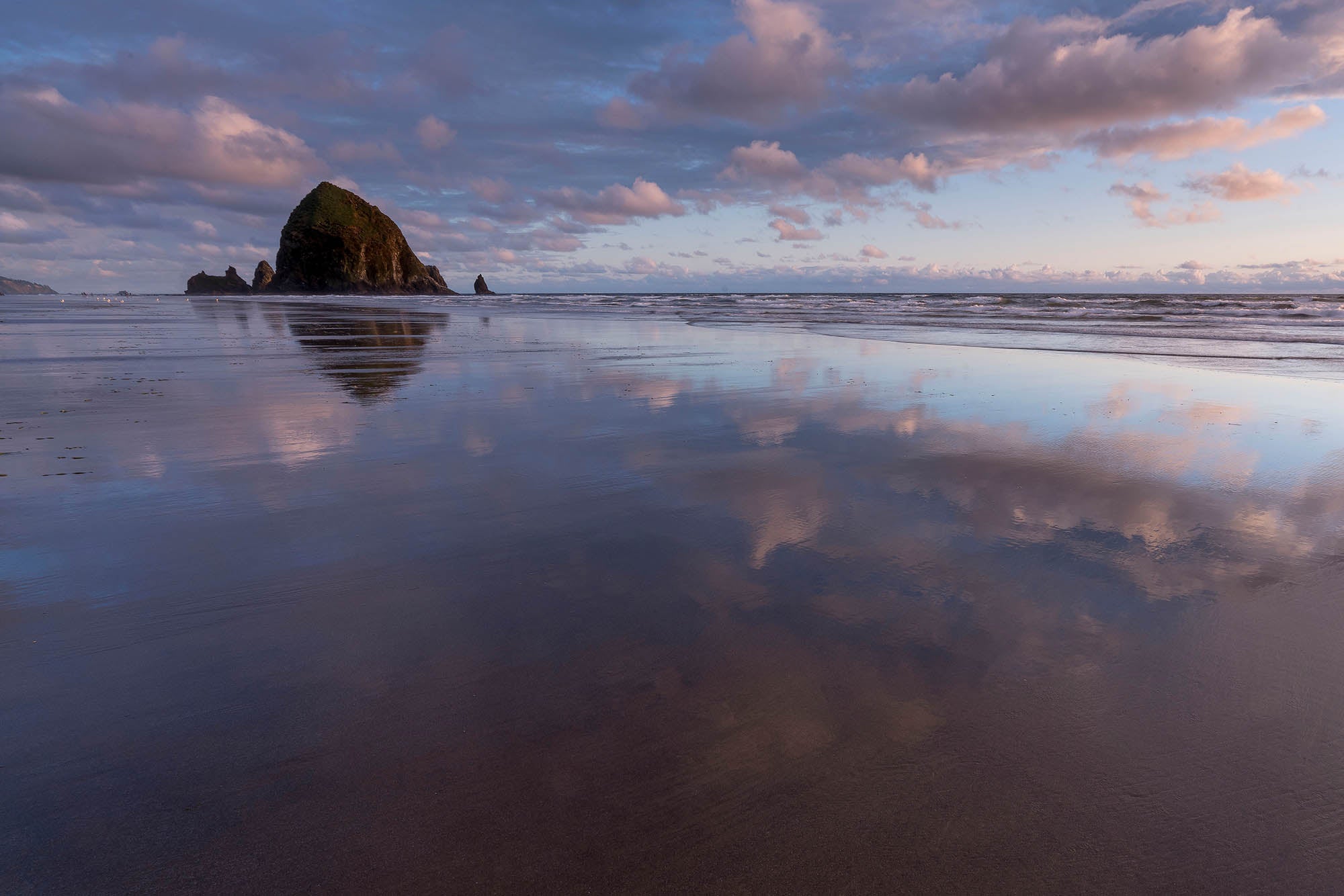 Canon Beach, Oregon (Sony α7R II, 16-35mm f/4, f/22, 1/5, ISO 50) – Back when I worked for ON1, I took a trip out to Portland to visit the office. But I also made it out to Canon Beach for a day and grabbed this one. For me, I love the simplicity in the photo and the beautiful clouds reflecting in the water on the beach. 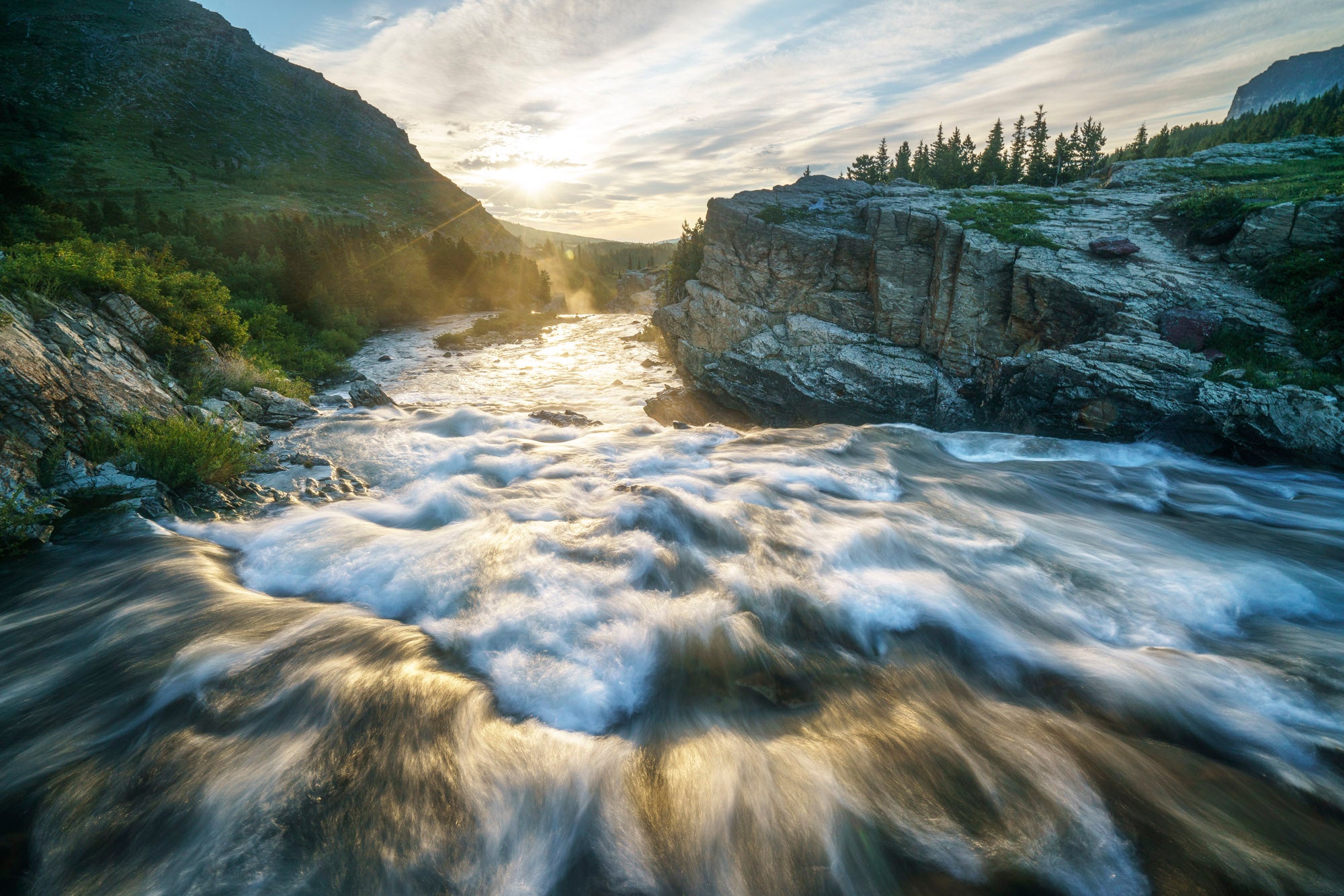 Swiftcurrent Falls, Glacier NP (Sony α7R II, 16-35mm f/4, f/16, 1/2, ISO 50) – You go to this area in Glacier NP to shoot Many Glacier (Below) at sunrise. But one of my favorites from the trip, was this little bridge nearby that faces the opposite direction. 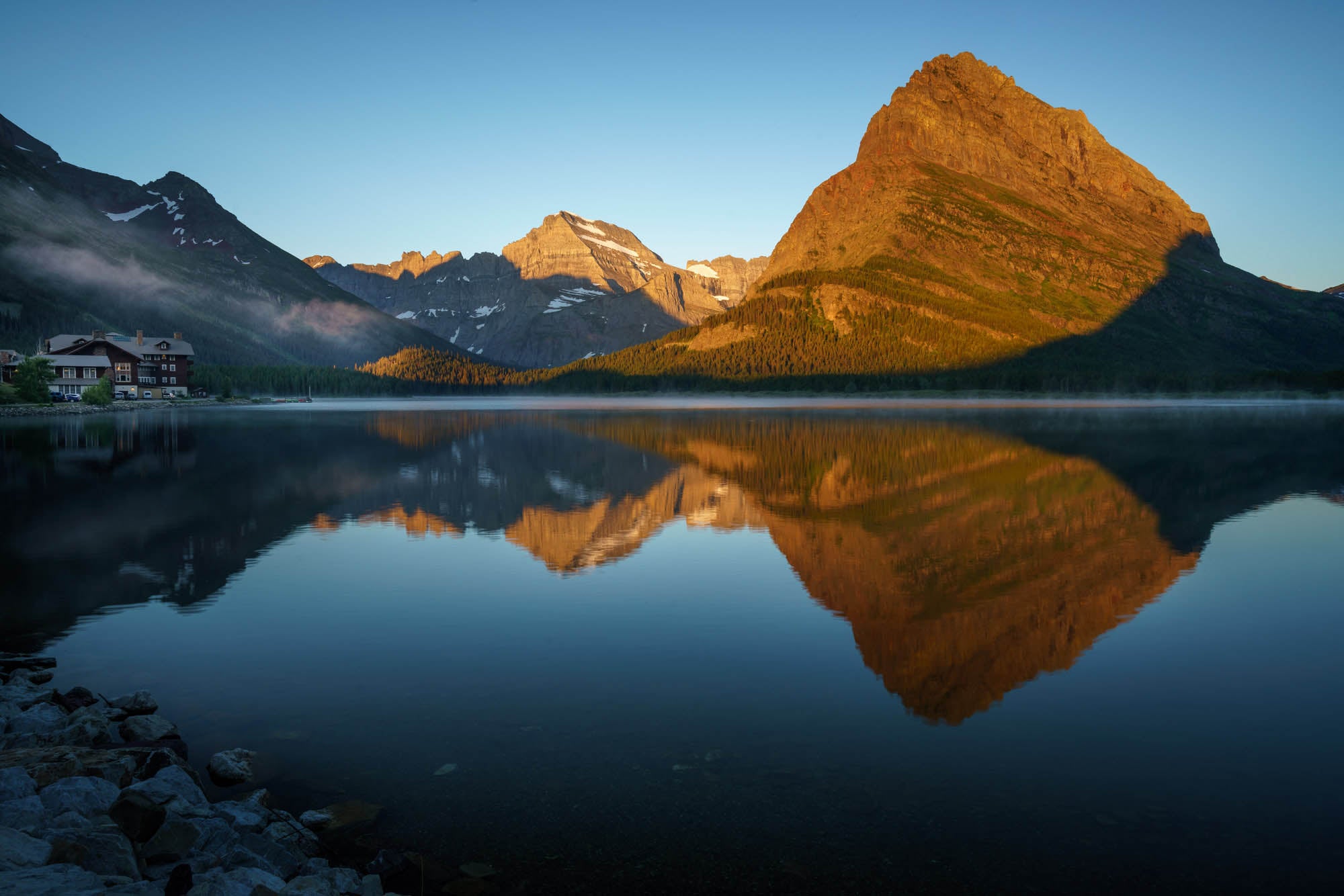 Many Glacier, Glacier NP (Sony α7R II, 16-35mm f/4, f/16, 0.3 sec, ISO 100) – The above photo doesn’t mean that Many Glacier wasn’t a site to see at sunrise as well. It’s gorgeous as you watch the sun come up from behind you and peel across the peaks. And if you’re lucky enough to get a nice reflection, even better! 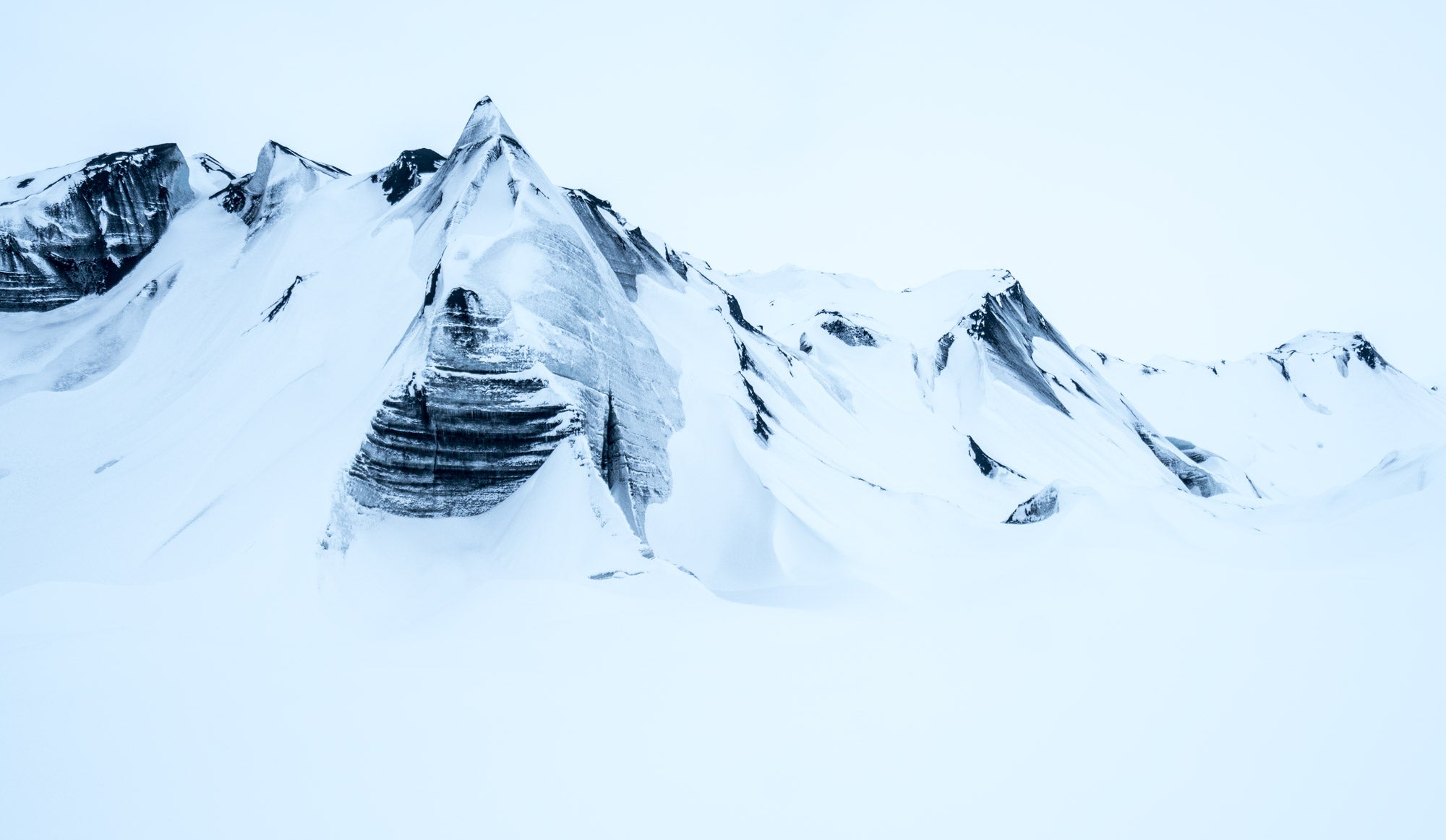 Ice Cave in Iceland (iPhone 6s Plus) – While we were in Iceland we visited an ice cave. While I love the ice cave photos, there was something so simple and beautiful about this photo I snapped with my iPhone. 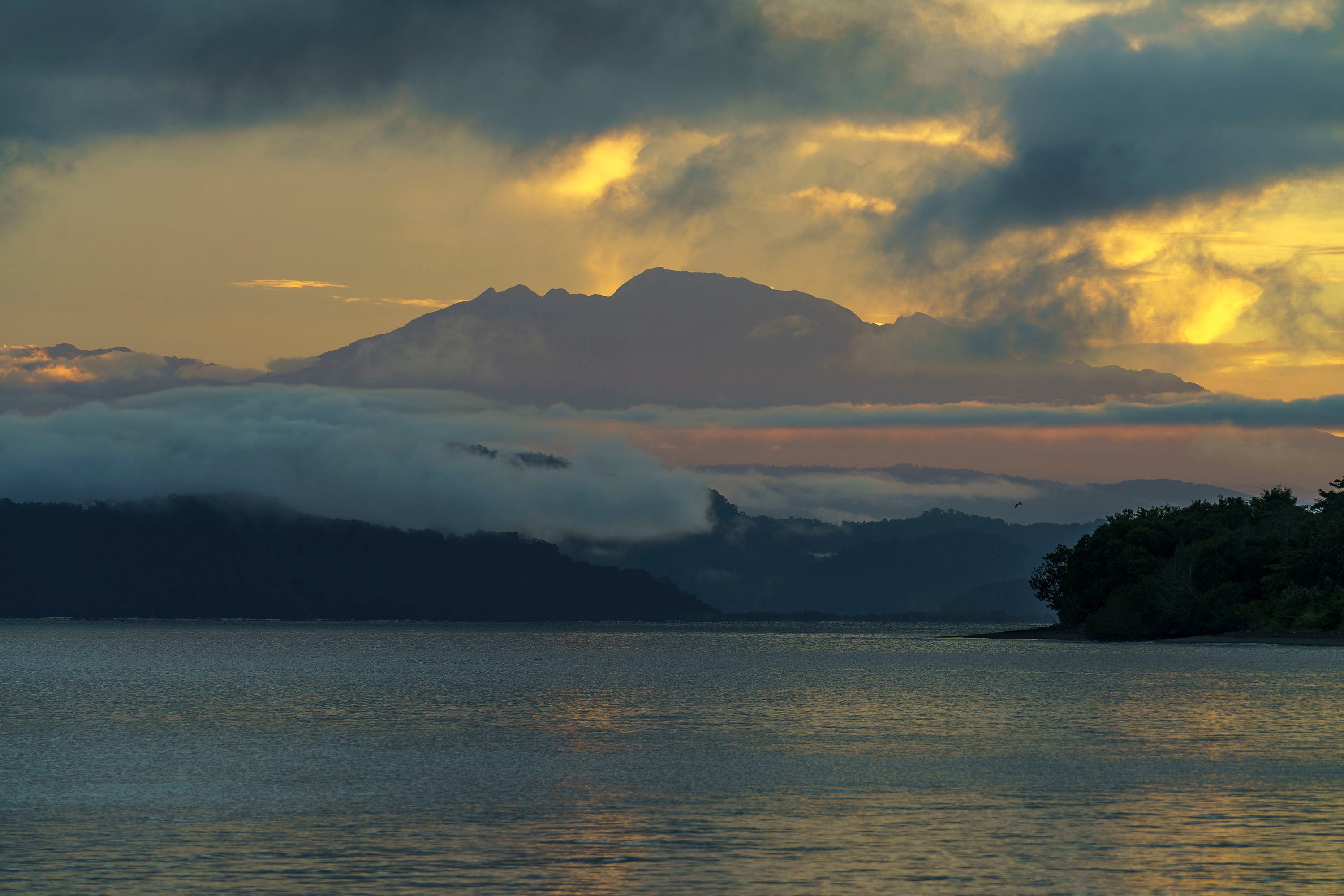 Costa Rica Sunrise (Sony α7R II, 70-200mm f/2.8 G Master with 2x Extender, f/8, 1/100, ISO 100) – While I really enjoyed photographing the wildlife in Costa Rica, that doesn’t mean I didn’t love my landscapes as well. This was taken at the dock that’s attached to the resort (Crocodile Bay Resort) where we stayed for the weekend on the Osa Peninsula. It’s actually way off in the distance, but I put my 70-200 with the 2x Extender on to zoom in on the light show that was going on in the distance. 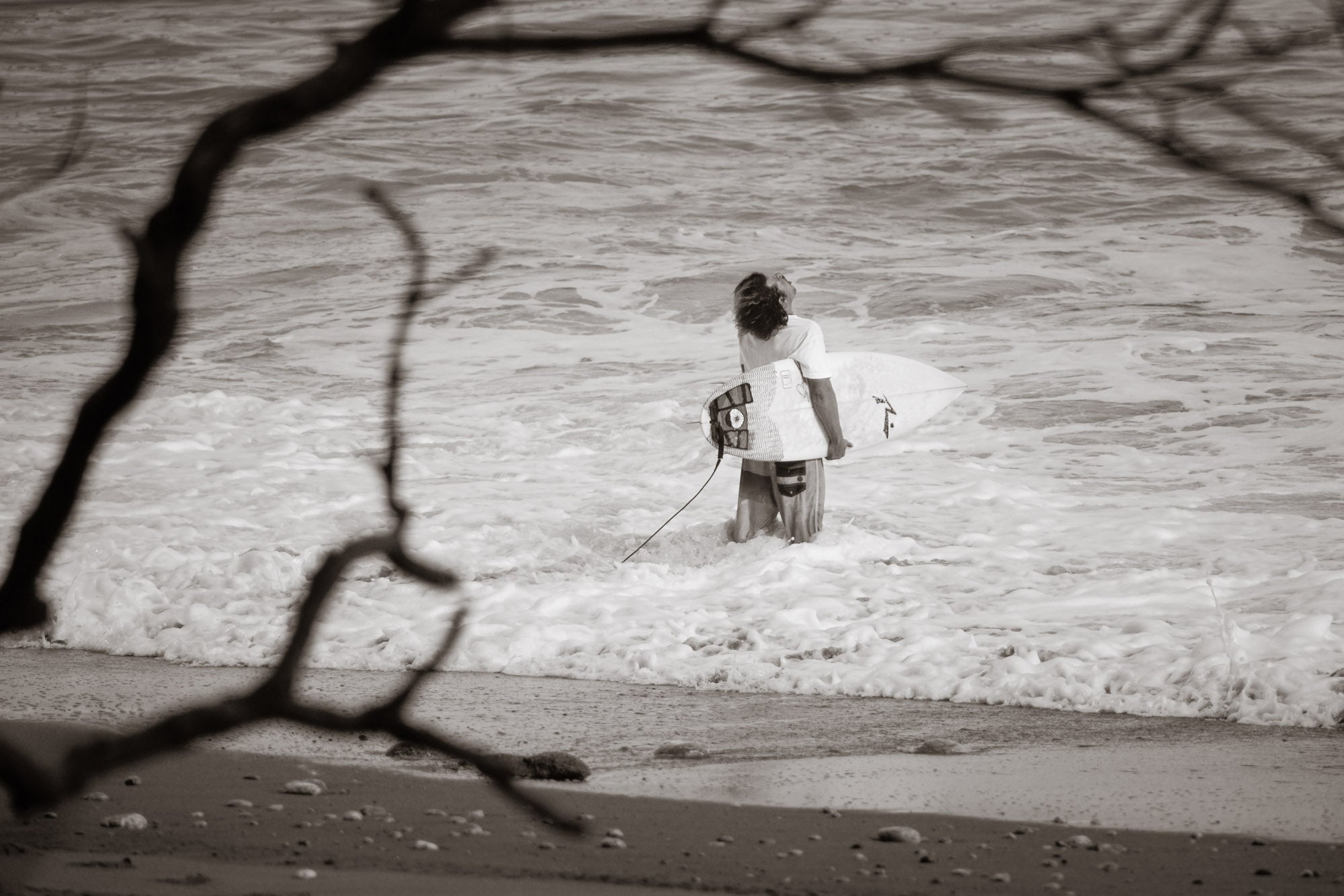 Costa Rica Surfer (Sony α7R II, 70-200mm f/2.8 G Master with 2X Extender, f/5.6, 1/8000, ISO 800) – There was a surfer getting ready to go out at one of the beaches we visited in Costa Rica. He had a pretty cool pre-surf routine and I was able to capture it. I saw him walking out and I actually could have moved closer and had an unobstructed view. But I deliberately frame him with these branches because I felt it helped tell the story a little better. 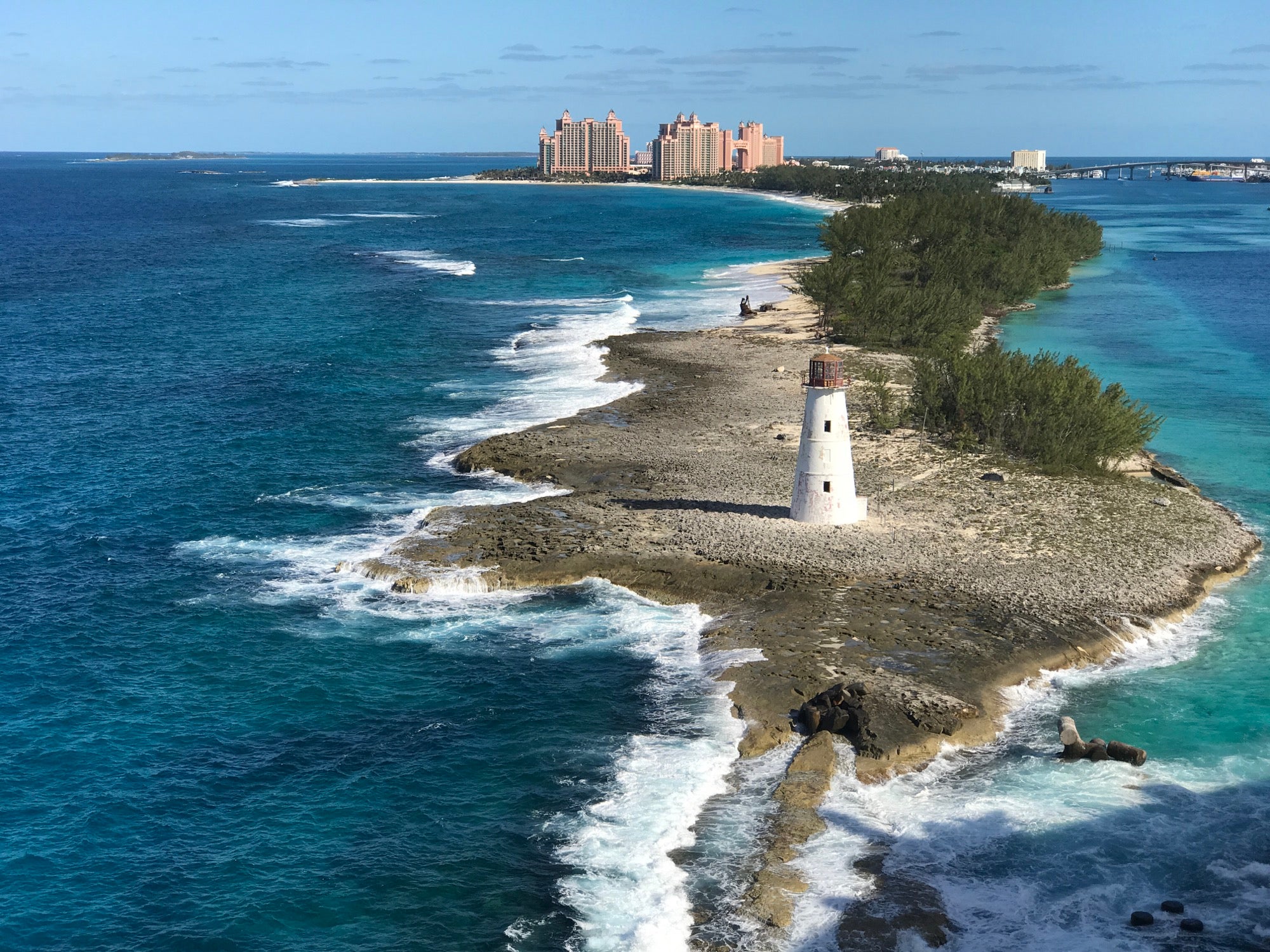 The Bahamas (iPhone 7 Plus) – And last but not least… this photo was taken off the deck of the Royal Caribbean Allure of the Seas (our annual family holiday cruise). Yep, it’s touristy. Yep, it’s not in great light. But I love it. Maybe because it reminds me of a great family vacation.

Go to MattK.com to see more of his photos and to learn about his workshops and his new Ultimate Lightroom Course.