From the moment it was announced, I’ve been looking forward to using the Sony 400mm f/2.8 G Master. The lens set the photography world abuzz and, in my opinion, it established a new peak for what a super-telephoto prime should be. Over a full kilogram lighter than the competition, better weight distribution, three image stabilization modes, the fastest focus system ever – the list goes on and on. I knew the lens would be a game-changer, and I couldn't wait to take it out into the world for a hands-on test.

"For me the only way to really get a feel for a new piece of equipment is in the wild: inclement weather, fast moving subjects, and back of the mind desperation that this may be a once-in-a-lifetime shot." -Nate Luebbe (@nateinthewild)

Of course, it would have been easy to take a quick trip to my local boardwalk and fire off a few frames of seagulls and call it a day. But for me, the only way to really get a feel for a new piece of equipment is in the wild: inclement weather, fast moving subjects, and back of the mind desperation that this may be a once-in-a-lifetime shot. I can't judge a new piece of equipment until I've been faced with a wide variety of shooting environments and had to adapt on the fly. Thus hatched the plan of heading to Churchill, Manitoba for a week of photographing wildlife in the extreme conditions near the Arctic Circle. Nothing gets the blood pumping like being ground-level with the largest terrestrial carnivore on the planet, the polar bear, while also being under the thumb of a looming journalistic deadline. What can I say - I work better under pressure. 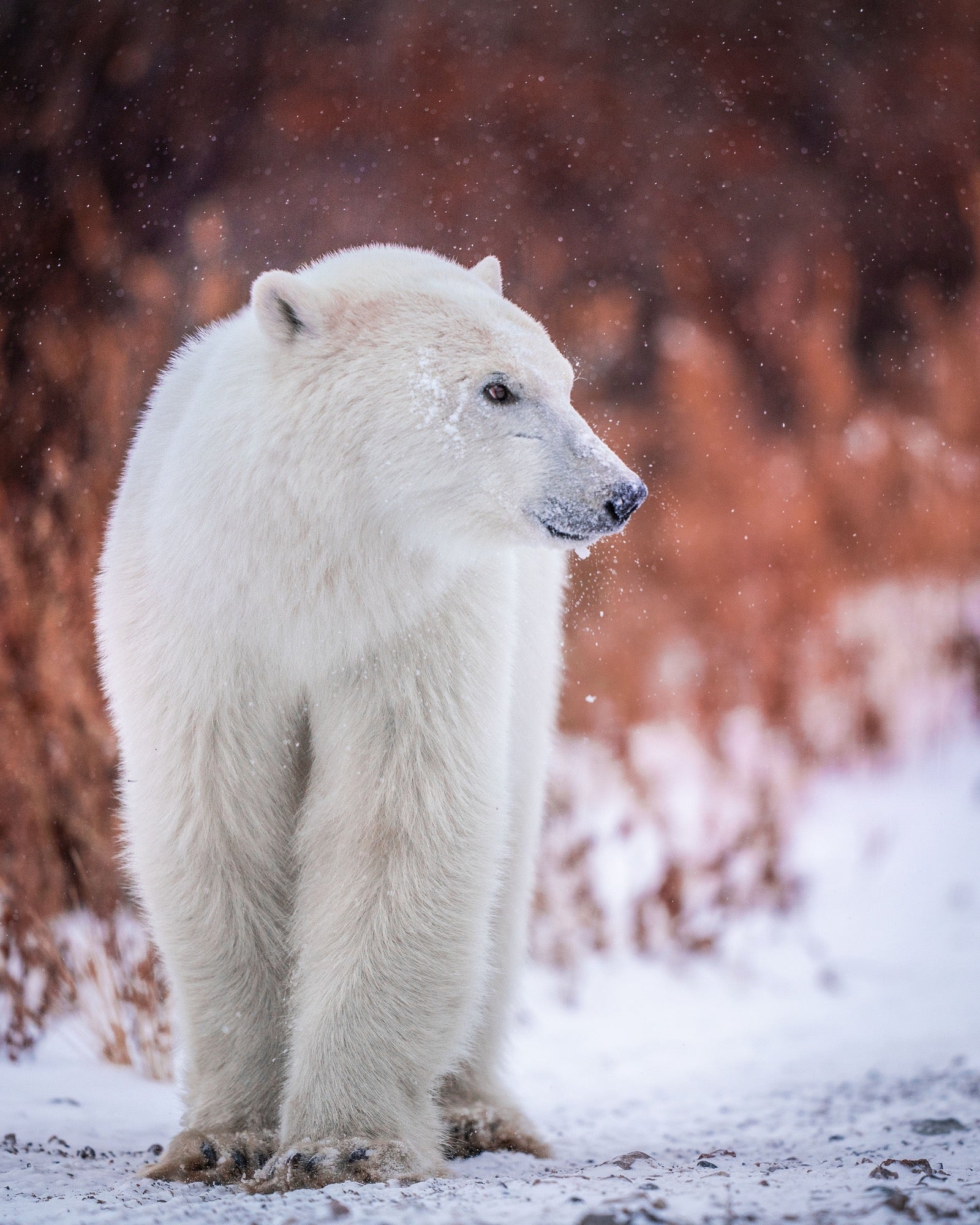 One of the most important aspects of wildlife photography is trying to convey the personality of the animals - a prospect that's nearly impossible from an elevated platform or secure enclosure. To truly capture a polar bear in the wild one needs to be on the ground with them; eye-to-eye, as they go about their daily duties. Finding other people willing to go for a long hike in polar bear country during peak feeding season proved to be a real challenge, and only one guide company in Manitoba offers ground-level experiences. The experts at Churchill Wild graciously agreed to work with me for this project at the Seal River Heritage Lodge right on the shore of the Hudson Bay. This is one of the first places the ocean freezes every year, drawing a convergence of polar bears excited to get out on the sea ice and hunt. Colloquially known as the Polar Bear Superhighway, the lodge made the perfect pushing off point for this expedition.

Although the Sony α9 is widely spoken of as being the best body for wildlife photography, I chose to go with the Sony α7R III for this trip. My reasons were three-fold:

Polar bears in the autumn are famously lazy, so needing 20 frames per second of burst shooting seemed quite unlikely.

Since I was intentionally limiting myself to a single prime lens, I decided it would be best to shoot the subjects smaller in the frame and allow myself a bit more wiggle-room for cropping later on. The α7R III’s 42 megapixel resolution would give me a lot of post-processing options.

Polar bears are white. Snow is white. Arctic foxes are white. Arctic hares are white. With all this white-on-white action, I figured the higher pixel-density of the α7R III would give me just enough added sharpness to help differentiate the subject from the background. 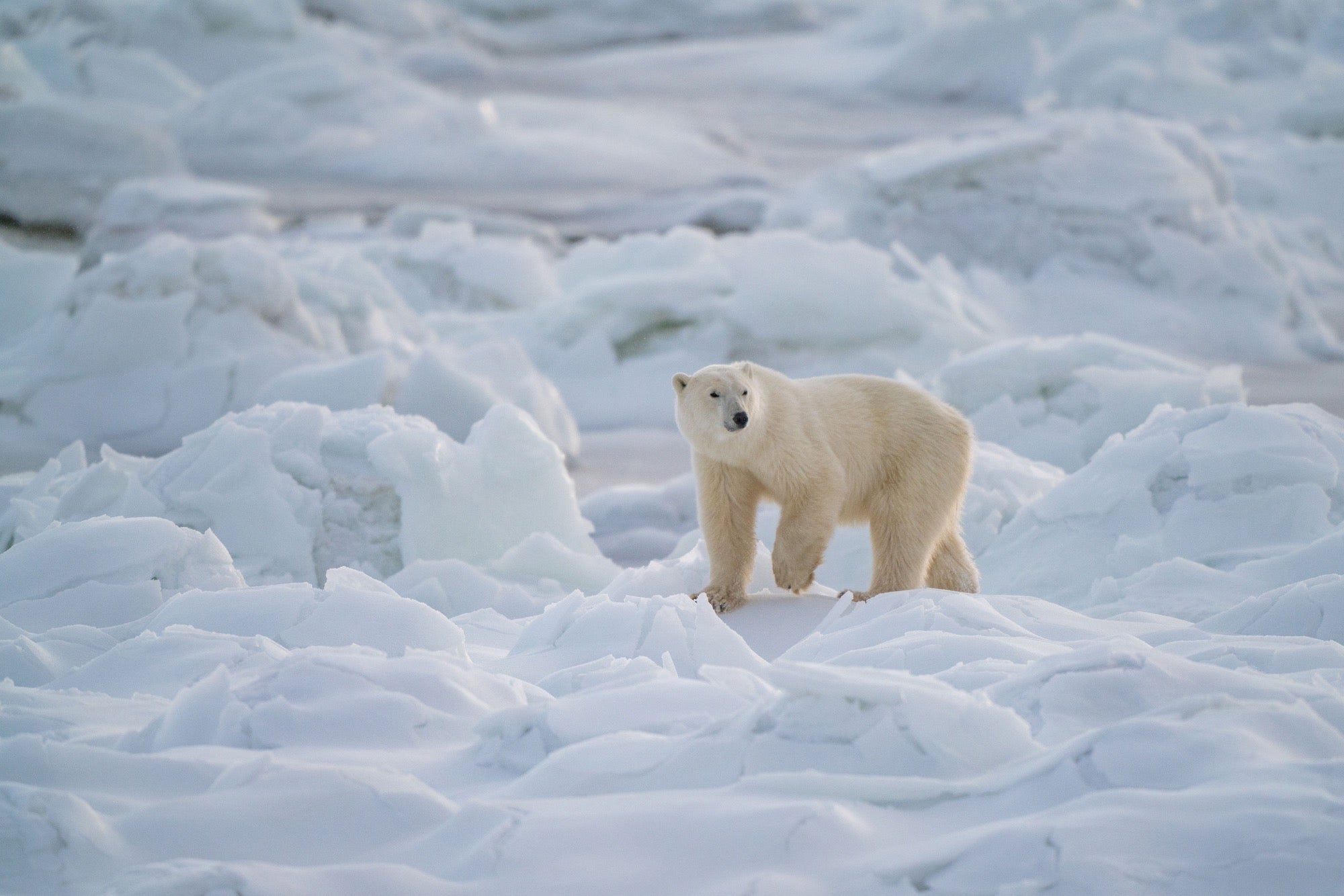 The 400mm f/2.8 G Master has a ton of customization options, all of which are outlined on thousands of photography blogs around the internet, so there's no need for me to break down each one here. Instead, I'll focus on the ones I found most useful:

This is supremely helpful, because having the lens hunt through an entire focus range from 2.7m out to infinity is inefficient and could cause missed shots. By selecting the expected range of the subject, I expedited the focus seeking and locked on to the subject much quicker which led to more keeper frames and much more fruitful photo sessions. Since this trip was centered on photographing 1,500 pound murder-machines with knife-fingers I kept the lens generally set to 7m-∞, because I figured if they were closer than 7 meters, I was going to have higher priorities in my life than finding a focus lock. 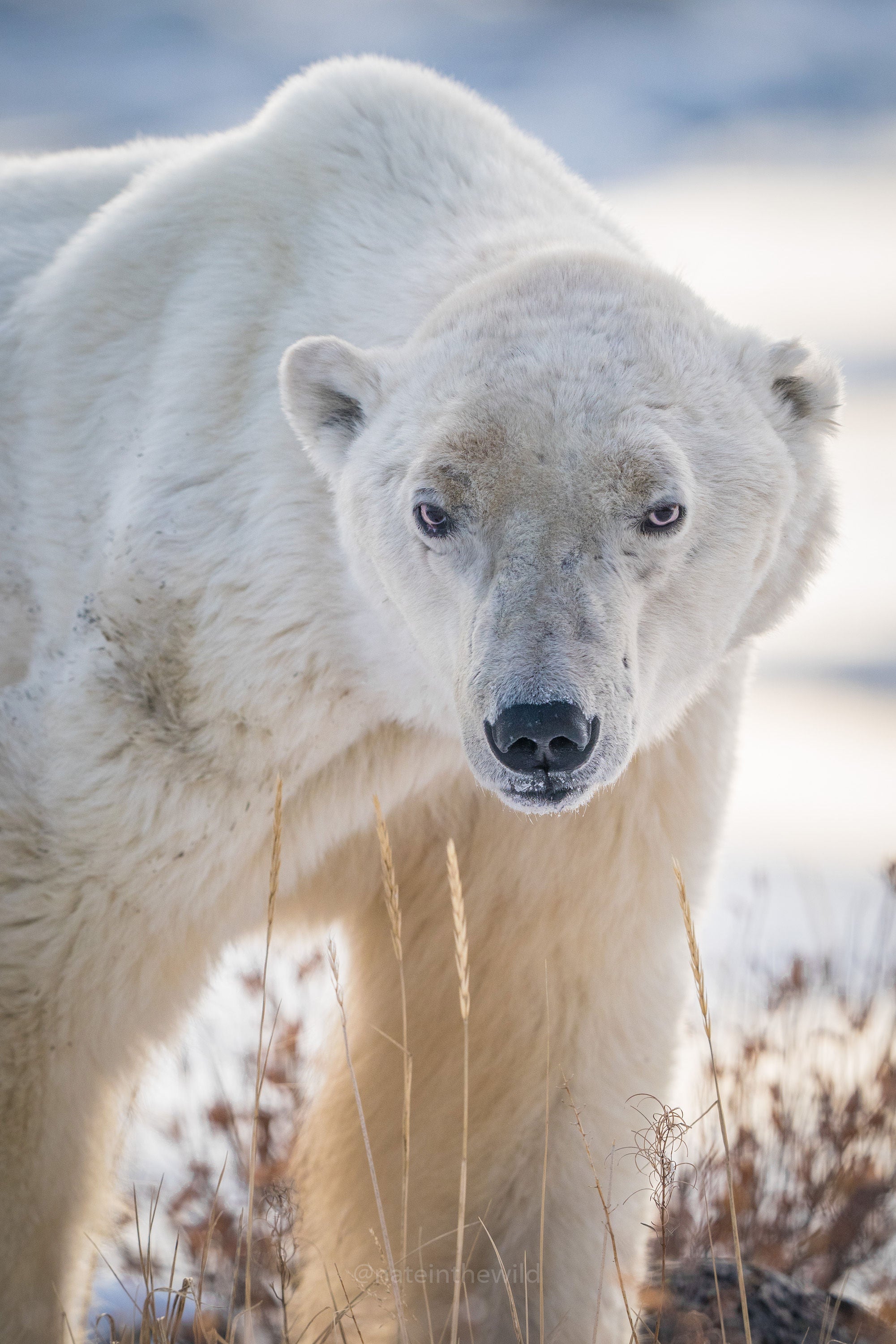 One of the coolest features of this lens is the ability to fine-tune the focus point with the focus ring without manually switching off the AF (either on the lens or on the camera). This allowed me to let the camera’s autofocus identify a subject (often the bear’s black nose as it's quite prominent in a scene of white), and then turn the ring to fine-tune focus onto the eye. On my first day in Churchill, I switched this on and I didn't turn it off for the rest of the trip. Autofocus continues to function as it’s intended until you turn the focus ring, and then the camera and lens seamlessly relinquish control to you. 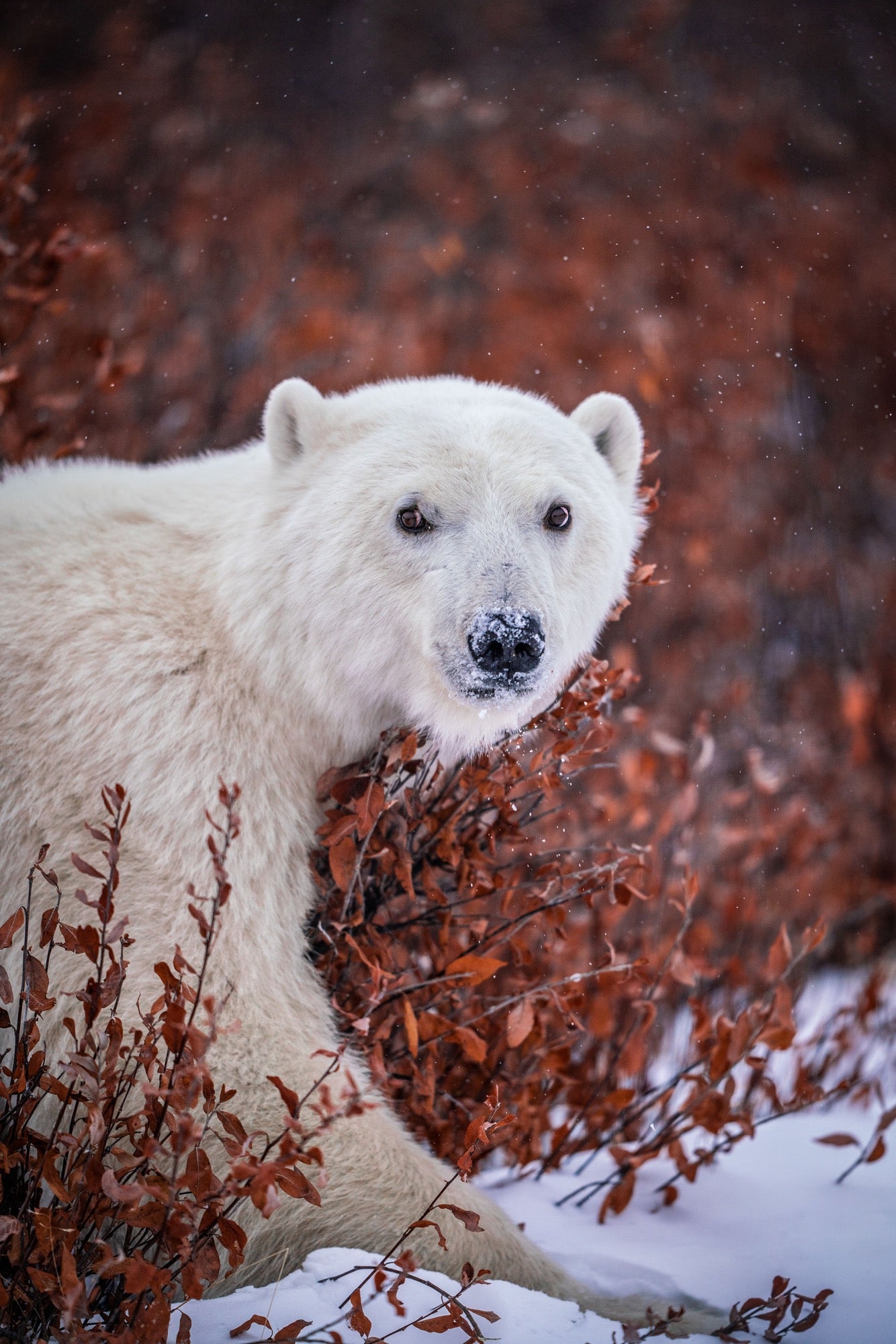 Since many of the best wildlife moments happen without any forewarning, I chose to forgo the tripod for the last few days of this trip, instead opting to shoot handheld to minimize my preparation time. Handholding a 400mm lens is no small feat. I was able to do this because of the reduced weight, the fact that since it’s designed for mirrorless Sony cameras, the 400mm’s balance point is much closer to the body than a DSLR’s 400mm, and because of the lens’ powerful image stabilization system. The image stabilization in particular was extremely effective and versatile. I found the only blurry photos in my catalog came from subject movement rather than stabilization issues.

All three modes have their place so I won’t declare a distinct favorite here, but it’s worth noting that I found mode three to be most effective for hand-held shooting with unpredictable subjects. I was fortunate enough to have a few moments with a very fast arctic hare sprinting past me, and with the Optical Steady Shot switch set to mode two (for panning) the camera and lens not only kept a perfect focus lock on the hare, but the stabilization mechanics of the lens kept every single frame perfectly sharp.

At first glance it may not seem impressive to discuss tracking a bunny hopping through the snow, but consider that I was shooting handheld, wide open at f/2.8, white subject on white background, and that an arctic hare is smaller than a football and runs at nearly 40 mph. The revolutionary linear focus actuator drives the focusing element in this G Master lens nearly five times faster than the traditional rotational focus systems found in nearly every DSLR lens. For fast moving wildlife, these lightning-quick focus mechanics are indispensable.

I mentioned that I was shooting with just a single prime lens, but I did hedge by using the Sony 1.4X and 2.0X teleconverters. Shooting with a telephoto prime can feel a bit restrictive, but in seconds I could convert the 400mm f/2.8 to a 560mm f/4.0 or an 800mm f/5.6, with no discernible loss of sharpness, contrast or color rendering. I found this especially helpful for subjects moving towards me (slowly), allowing me to comfortably transition from wider shots that show context in the landscape to beautiful portraits of the animals’ face and body. Teleconverters of course cut the maximum aperture, which would usually be a pretty significant drawback, but since this lens is an f/2.8, even the reduced light gathering from using the teleconverter is more than enough for any reasonable shooting scenario.

Since my days with Churchill Wild were entirely spent exploring the frozen tundra on foot, the light weight of the Sony 400mm f/2.8 G Master + α7R III (a whopping four pounds lighter than a common DSLR alternative) saved me from some serious strain. By bringing teleconverters to extend my reach rather than a second lens further lightened my load and allowed us to cover significantly more ground each day - a massive bonus when trying to photograph rare wildlife in such vast wilderness. 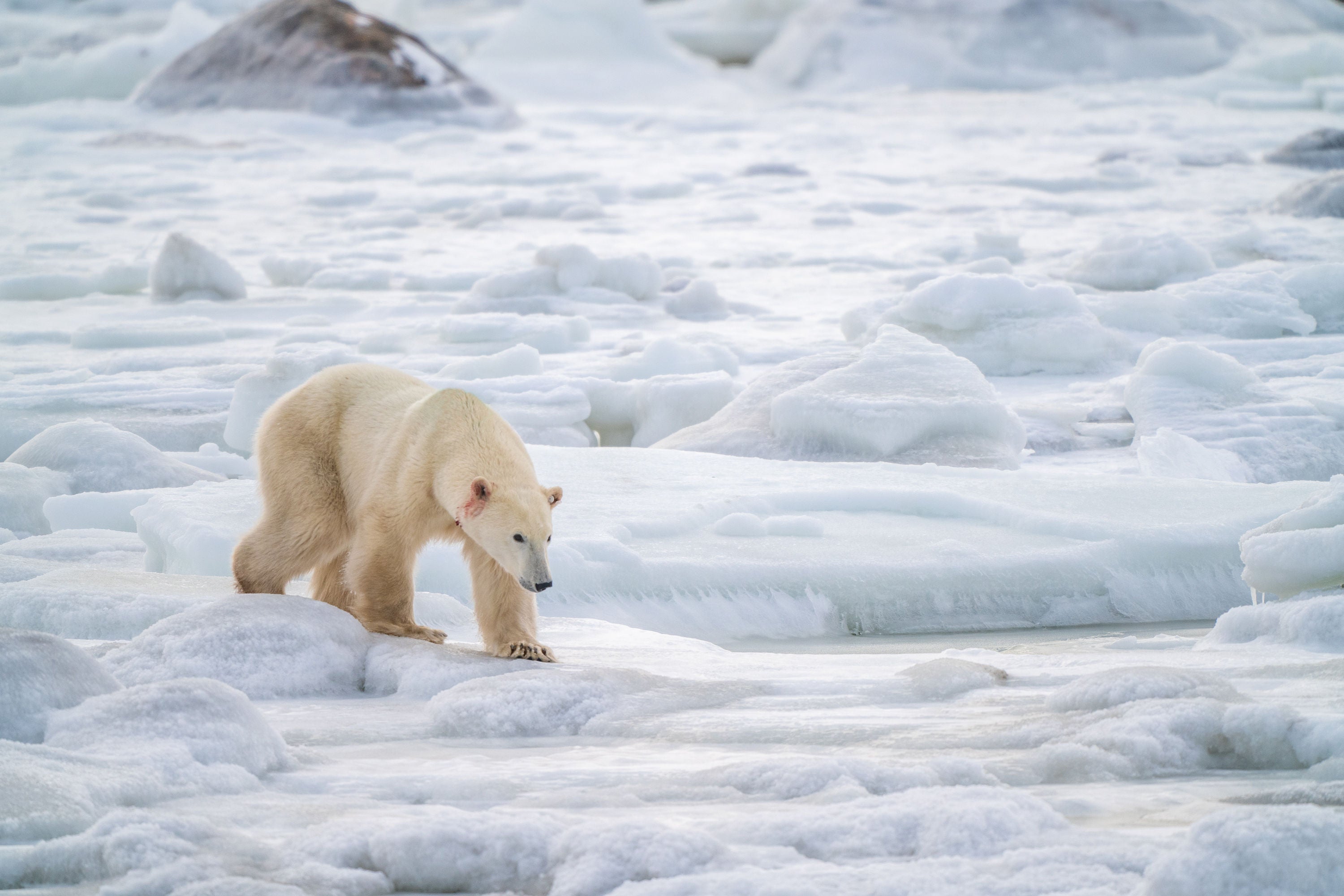 The bottom line is that this is a premium lens for premium projects and the price tag reflects that. You’re paying for the lightest 400mm f/2.8 lens ever manufactured, with beautifully balanced internal elements, revolutionary focus mechanics and glass elements engineered to transmit the cleanest, sharpest images imaginable. Shooting with the α7R III, this lens had no trouble resolving a 42.4 MP sensor, and it’s clear that Sony built the 400mm G Master to be a lifelong investment. Since Sony is the world’s leading sensor maker, they’re able to design lenses for current and future sensor developments. I have no doubts that no matter what outlandish pixel counts or burst speeds the future may bring, this lens will be up to the task. 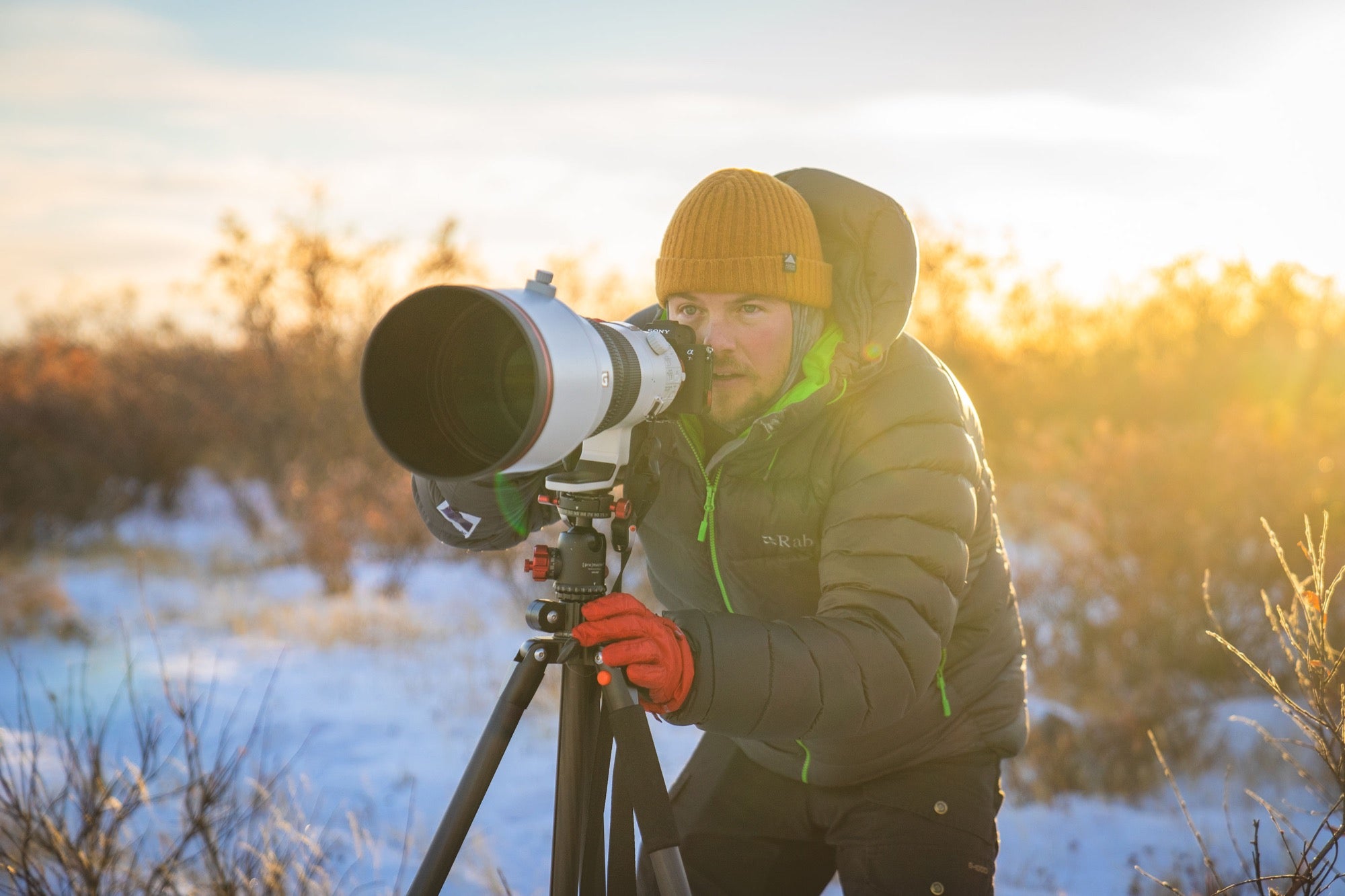 #AICdoesArizona: Explore The Majesty of The American Southwest

#AICdoesArizona: Explore The Majesty of The American Southwest