Becky Kagan Schott is the embodiment of an explorer. She’s an Emmy-winning photographer and videographer whose work has been featured on Discovery Channel, The Travel Channel and National Geographic. As an accomplished technical diver, she specializes in exploring some of the most inaccessible places on the planet and bringing back images and stories from the depths.

Over the past few years Schott has been pursuing a project to document shipwrecks in the Great Lakes of North America. The Great Lakes are known to mariners for their beauty and for the speed at which the weather can turn and transform that beauty into deadly ferocity. In the deep, cold water countless wrecks lie peacefully at rest, preserved by the environment. Working at depths as far as 330 feet, Schott is photographing the wrecks to document and to show them in an artistic way to tell their stories. 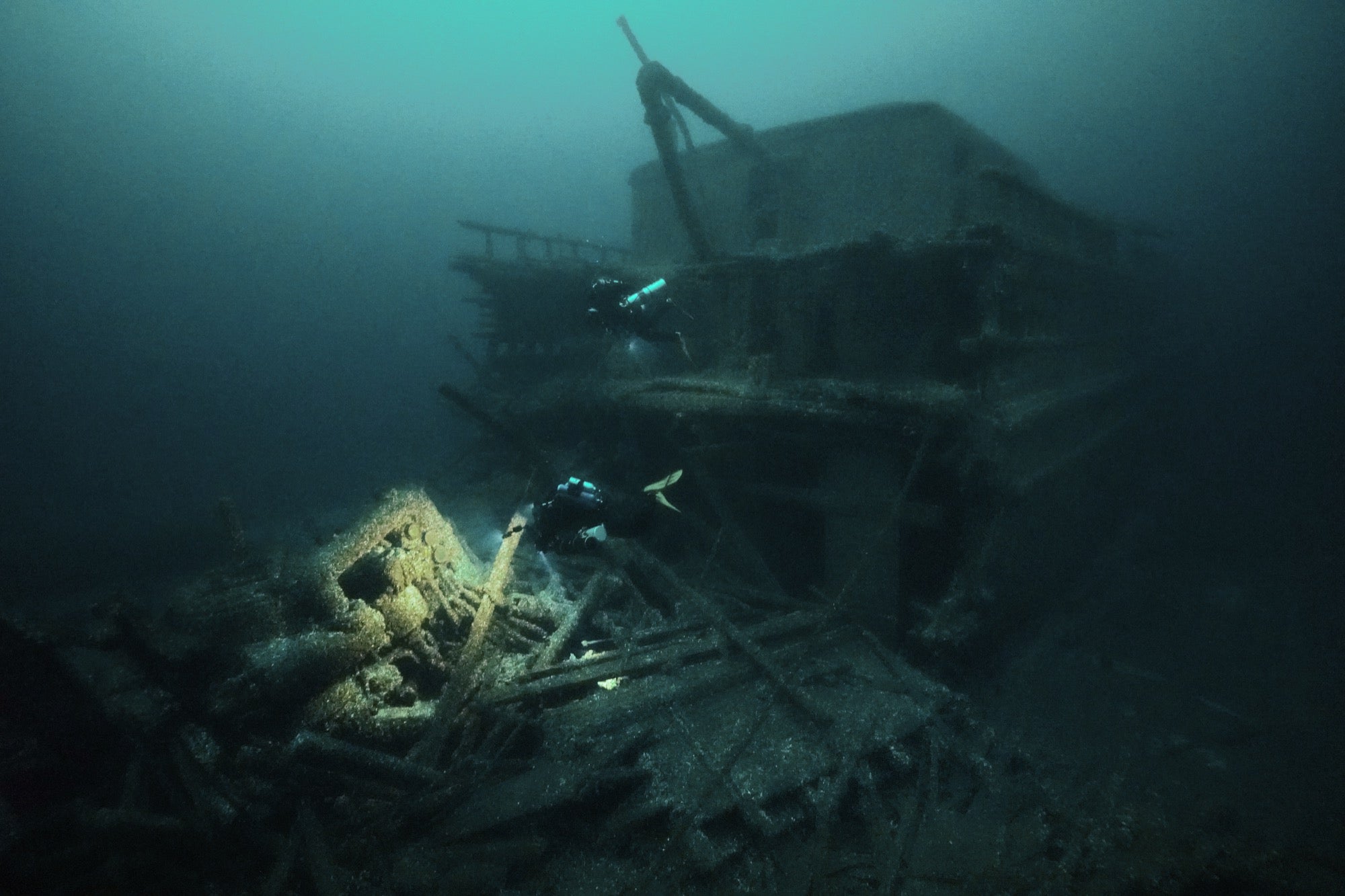 Becky Kagan Schott: My goal is to document extreme underwater environments in high quality. My focus has been on caves, and right now my passion or obsession is shipwrecks; specifically shipwrecks in the Great Lakes. The reason why is because these wrecks in the Great Lakes, they're in cold freshwater, and they're just exquisitely preserved in that environment. Diving on them is like visiting a time capsule. You can dive something that's a pre-Civil War era, wooden shipwreck with side paddle wheels 200 feet down. It's so preserved. It looks like you could pick it up and sail it away today. From a photographer's point of view, these are just some really visually stunning shipwrecks. They're very challenging to get to as well, so my goal for the last several years, has been to go around to all of the different Great Lakes and photograph different types of shipwrecks.

Alpha Universe: How much of this project is hunting for new wrecks?

Becky Kagan Schott: One of the things that's really exciting about diving in the Great Lakes is not everything has been found. I have been fortunate to be a part of a couple of different exploration projects going out and documenting new wrecks. I wasn’t the one that found those shipwrecks. I'm not the hunter; but agencies and others that I know, if they find a shipwreck, they'll ask me to come in and be part of the team to help document it with them. That whole thing is a process, of course…going down, trying to identify it, making sure it’s the right wreck that they're looking for, and trying to put a name on that particular site.

Alpha Universe: How much of the work on the shipwrecks has been pure documentary versus 'art'?

Becky Kagan Schott: It really depends. If it's a newly-discovered shipwreck and we go down, the goal is to identify it and that's pure documentary where we’re shooting video or stills of main features. Otherwise, in the last four years or so, I’ve been trying to be more of an artist and I've really been trying to shoot the shipwrecks in a completely different way that nobody's ever seen before.

What I mean by that is I’m really planning my shots out in advance, doing advanced lighting techniques, sometimes making my own lighting rigs, things like that. I want to show them in a more artistic way versus 'here's the ship's wheel,’ ‘here's the rudder.' Those objects are fine, but I want to show the overall picture of the wreck. These wrecks look so ghostly and haunting sitting there on the bottom. In just one image I want to tell the story of that shipwreck in its final resting place. 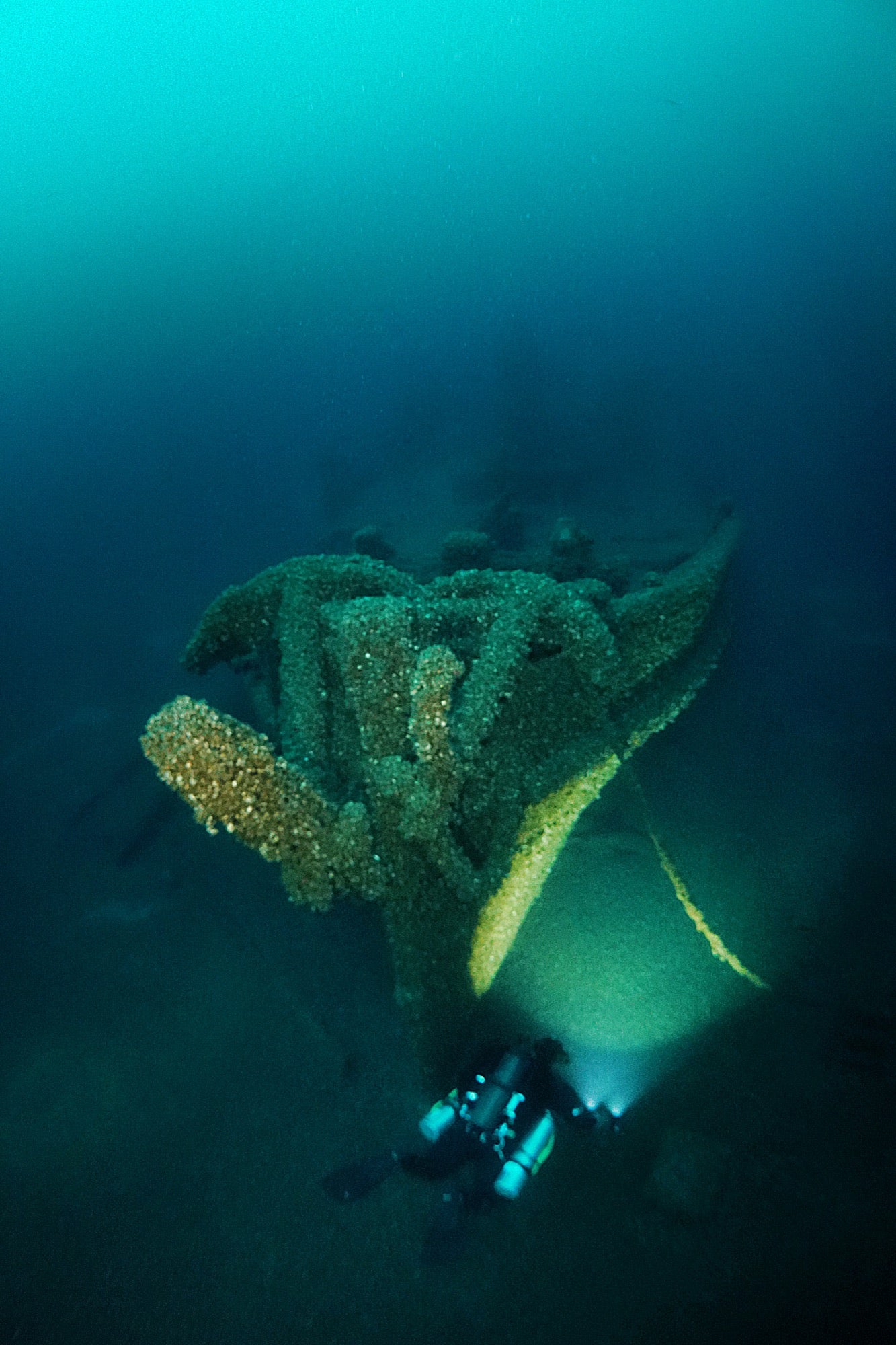 Alpha Universe: There’s a very special feeling one gets looking at your photos. It’s more than just haunting. It’s visceral.

Becky Kagan Schott: I really connect with them. I don't know how else to put it. I'm not just diving the wreck. I research the wrecks and I learn their stories. To me, the story is one of the most important parts to go along with the image, especially with these wrecks in the Great Lakes. There are stories of such tragedy and heroism. And some of them are stories of mystery where nobody knew what happened to the ship until over 100 years later when the wreck was discovered.

Lately I've been most interested in the wrecks that have stories of survival and survivors. Something viscous happened to put these ships on the bottom of the lake. When we see them, they're so serene and beautiful and preserved and quiet and still. And you know that the lake had to be, just viscous to rip some of these big freighters in half and send them down to the bottom. I’m trying to tell that through the images. I try to connect with the story. Then, when I'm actually on the shipwreck, I try to convey that through the images, and try to find something that would inspire someone or give them a broad overview of what that ship looks like, a gravesite resting there on the bottom. 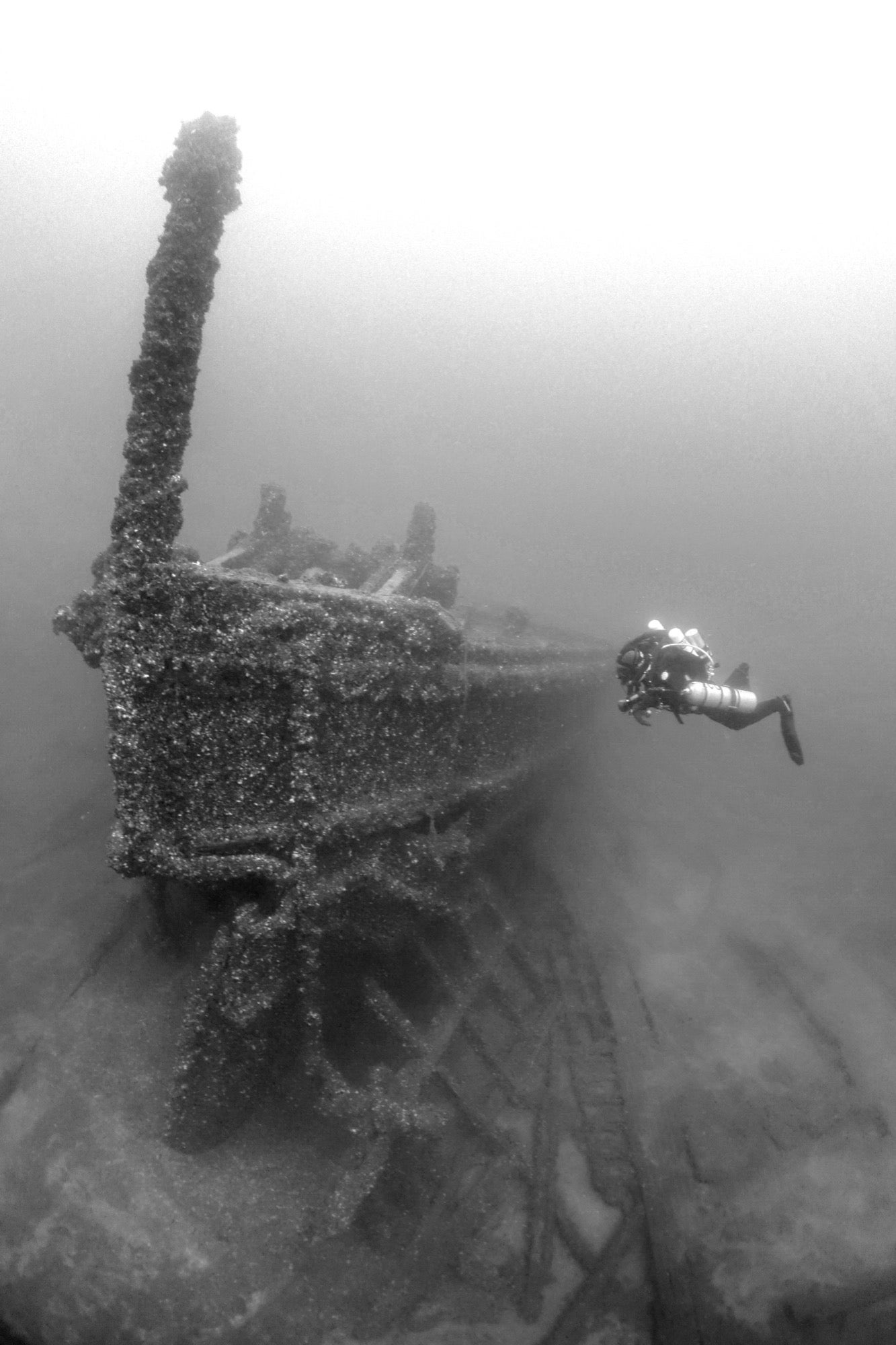 Alpha Universe: What draws you to the deep?

Becky Kagan Schott: It's the stories of exploration and discovery. With my photography, I want to shoot something that nobody else is shooting. I want something that nobody else is doing. That really draws me in. Plus, being a technical diver, I really enjoy the more challenging environments, like underwater caves, and the deep wrecks. I'm focusing on the more extreme environments that really nobody is going to, to show what they're like.

Alpha Universe: What are you shooting with these extreme environments?

Becky Kagan Schott: I’ve been using Sony cameras since the time I worked in television news. Recently in the Great Lakes I've been using the Sony α6500 in the Fantasea housing. I really wanted to test it out in extreme, low light conditions on some of these shipwrecks. I gravitated toward that one because of the interchangeable lenses, being able to control the camera manually and I liked the idea that it can shoot 4K video as well.

On the shipwrecks, I’m mostly using the 10-18mm. I use an adapted fisheye lens as well, but for the wrecks, I prefer to have more straight lines and more realistic looking images than I get with the fisheye distortion. Especially if I'm going to penetrate a wreck, I don't want to see the distortion.

I started using Fantasea housings when I got one for the Sony RX100 IV. What I really liked about the Fantasea housing for that camera was that it’s small and  it’s lightweight to travel with. And they feel really nice to use in the water. The RX100 was just such a great little camera that I've taken that one with me everywhere, all over the world… I’ve used it for great white sharks,  I’ve used it in the Great Lakes, in New Zealand… It's been a great little backup.

When the Fantasea α6500 housing came out, I was definitely interested in trying that one out. It has bigger knobs, so people like me with dry gloves can use the knobs a lot easier. It’s very light and travel friendly; especially in this day and age when every extra ounce costs you. 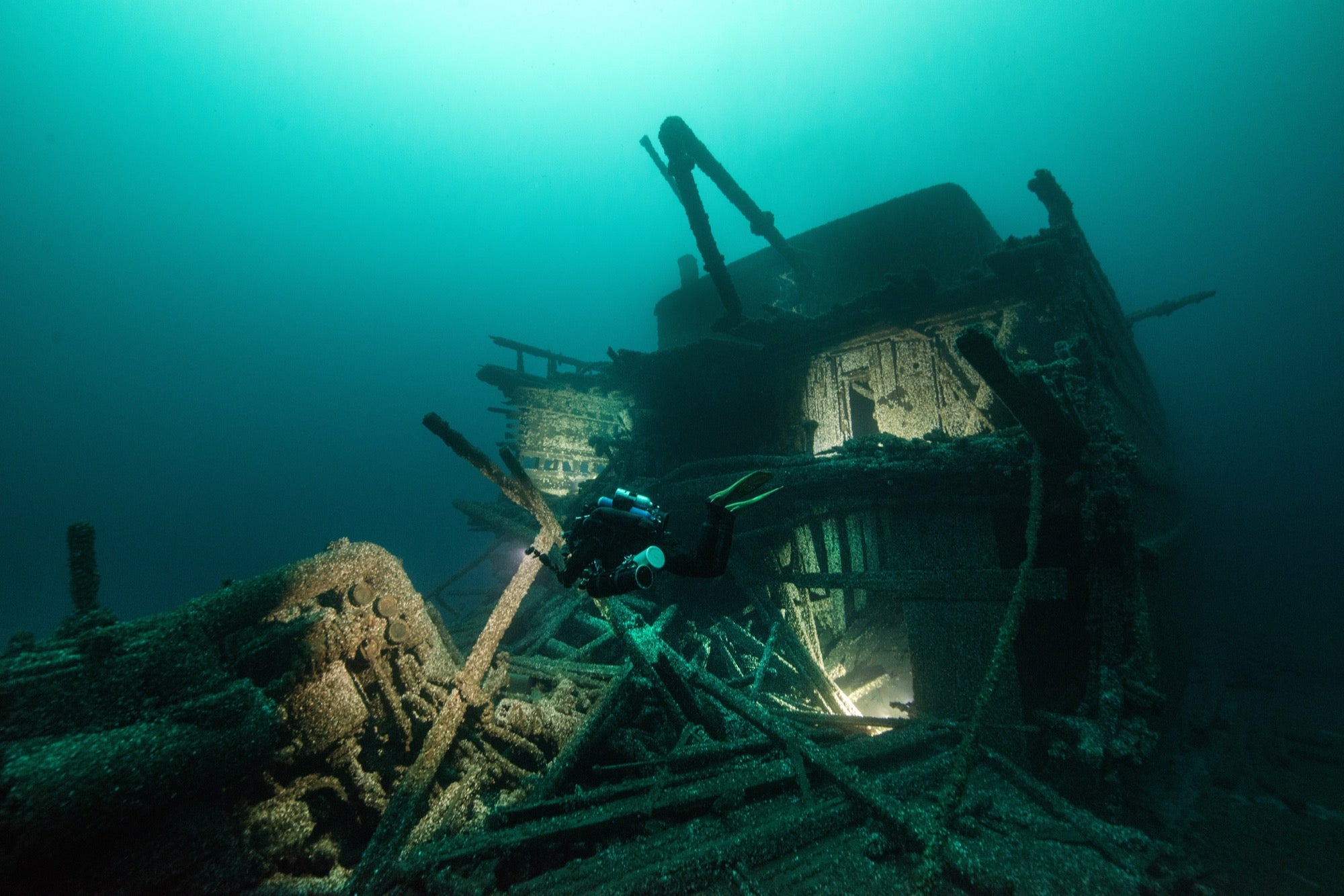 Alpha Universe: You mentioned that you’re doing a lot with lights on the deep Great Lakes wrecks. What do you use for lighting?

Becky Kagan Schott: I’m using all Light & Motion 9600s. I've got about six of them right now. They're fantastic, because again, they travel easy. They're super easy to charge. I've really migrated away from strobes. I'm mostly using video lights for everything that I do now because I can actually see the image before I shoot it, and I can see the whole exposure. If it's on a reef, like out in British Columbia, I can see the colors in the reef beforehand. Also, because the lights are on the camera and they’re on at all times. My buddy can see where I am. That's pretty nice. Plus, I can go back and forth from shooting video or shooting stills. I can do both. 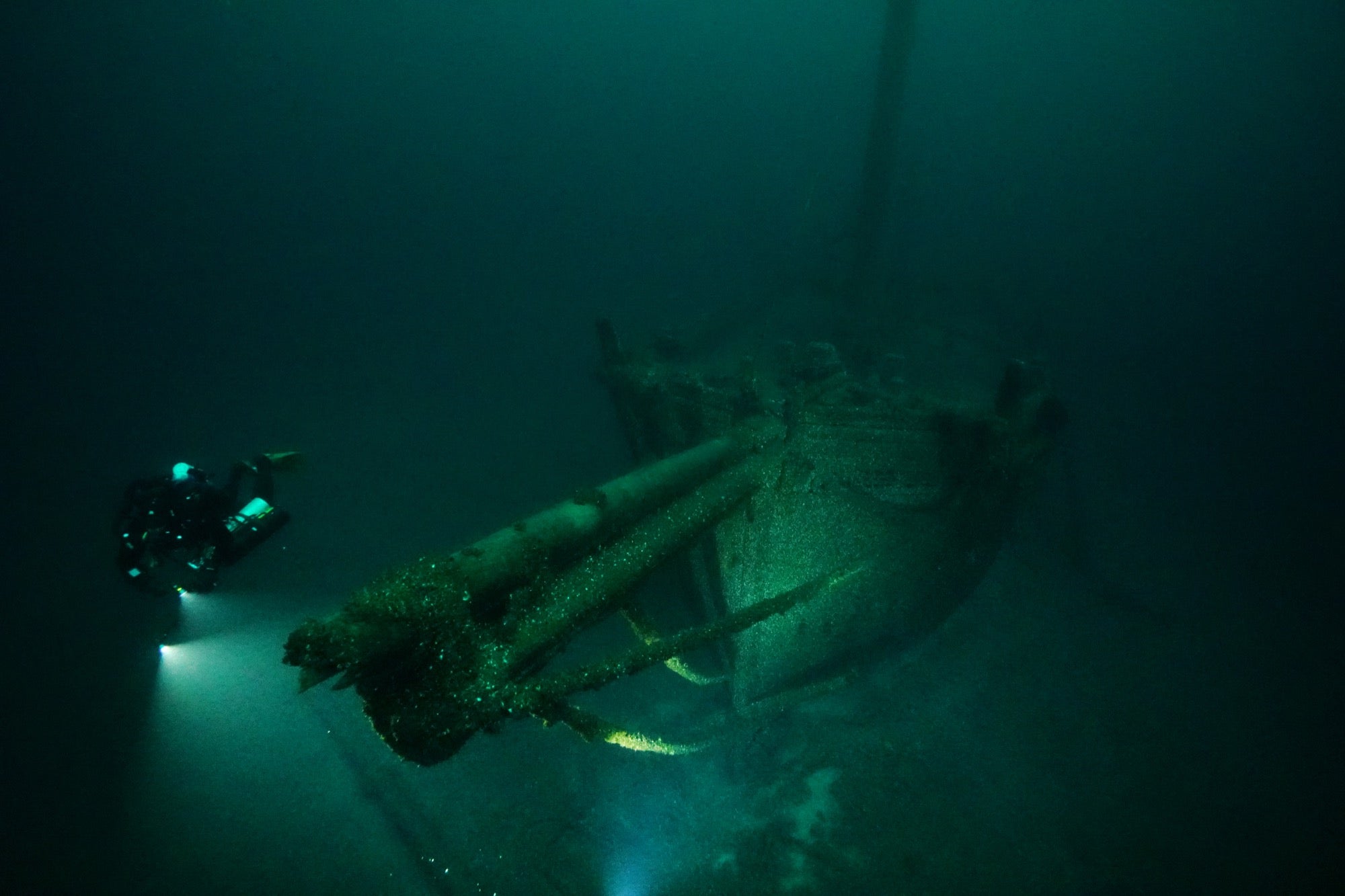 Alpha Universe: It’s very serious work, photographing these wrecks. While they seem peaceful, the circumstances that brought them to this end were pretty violent.

Becky Kagan Schott: I think of that a lot and maybe it's a little morbid, but the stories are incredibly gripping. One ship in particular that I've been focusing on for the last two years is called the Daniel J. Morrell. It was a big Great Lakes freighter. It sank in November '66. A lot of these ships go down in November and December. I try to imagine what it’s like. It's the last run of the season. It's two or three in the morning. It's dark. It's cold. Then quickly, they've got 30 foot seas. The ship is making I don't even know what kinds of crazy sounds that I hope I’ll never hear in my lifetime. Then, to run out on the deck and see your 600-foot ship literally being ripped apart, and people jumping into life rafts in 35-degree water at two in the morning…It's hard to even fathom that kind of thing.

So many of these shipwrecks we think of as happening a hundred years ago,  and a lot of them in the Great Lakes did sink a 100 or a 150 years ago. But there are also some of these modern day wrecks like the Morrell. That was only 50 years ago. Then you've got the Edmund Fitzgerald, which was only 40 years ago with no survivors. These shipwrecks are still happening. It's not just something that happened in the past. It's something that could still happen today. As beautiful and serene as the Great Lakes are, they can turn very violent very fast. I have a lot of respect for them. 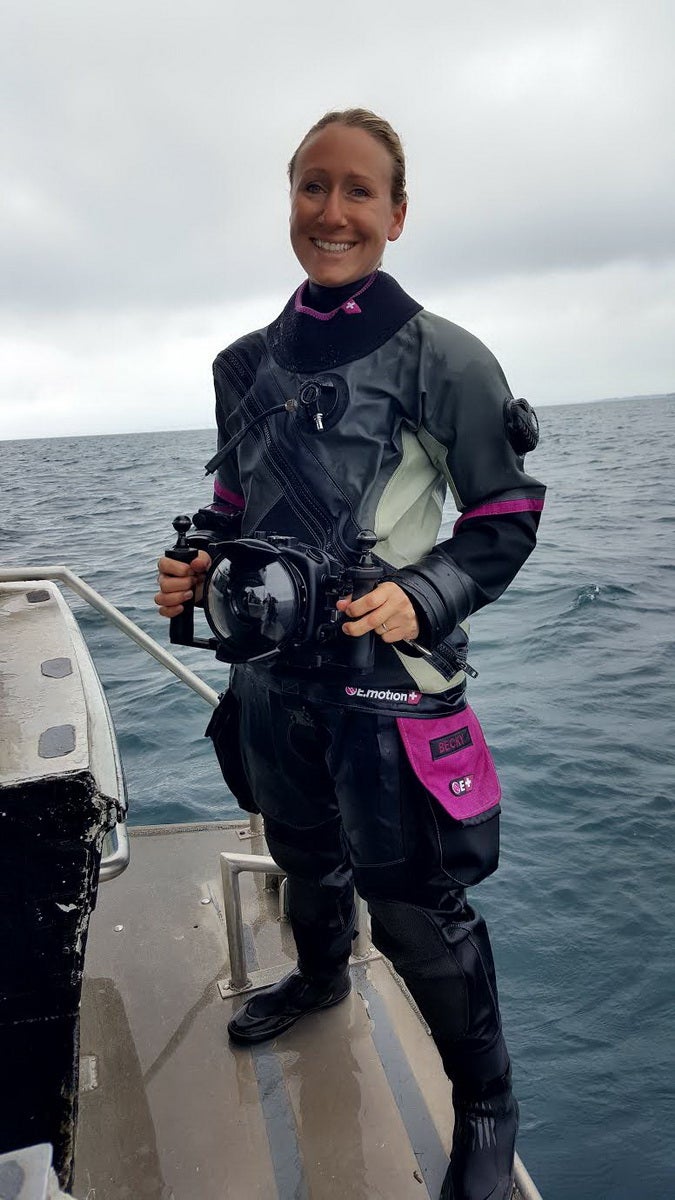 See more about Becky Kagan Schott on her website, liquidproductions.com

Shooting Compact In The Gardens of The Queen

Shooting Compact In The Gardens of The Queen