When he had an opportunity to venture to the Canadian Rockies with other members of the Sony Alpha Imaging Collective, Phil Yoon (@phil.yoon) decided he was going to take advantage of the opportunity to work on timelapses in addition to his regular photography. He kitted up with that in mind. We spoke with Yoon to find out more about the gear he brought and why.

This native E-mount lens is super crispy! It performs great in low light and has a creamy bokeh that I don't see in many lenses. 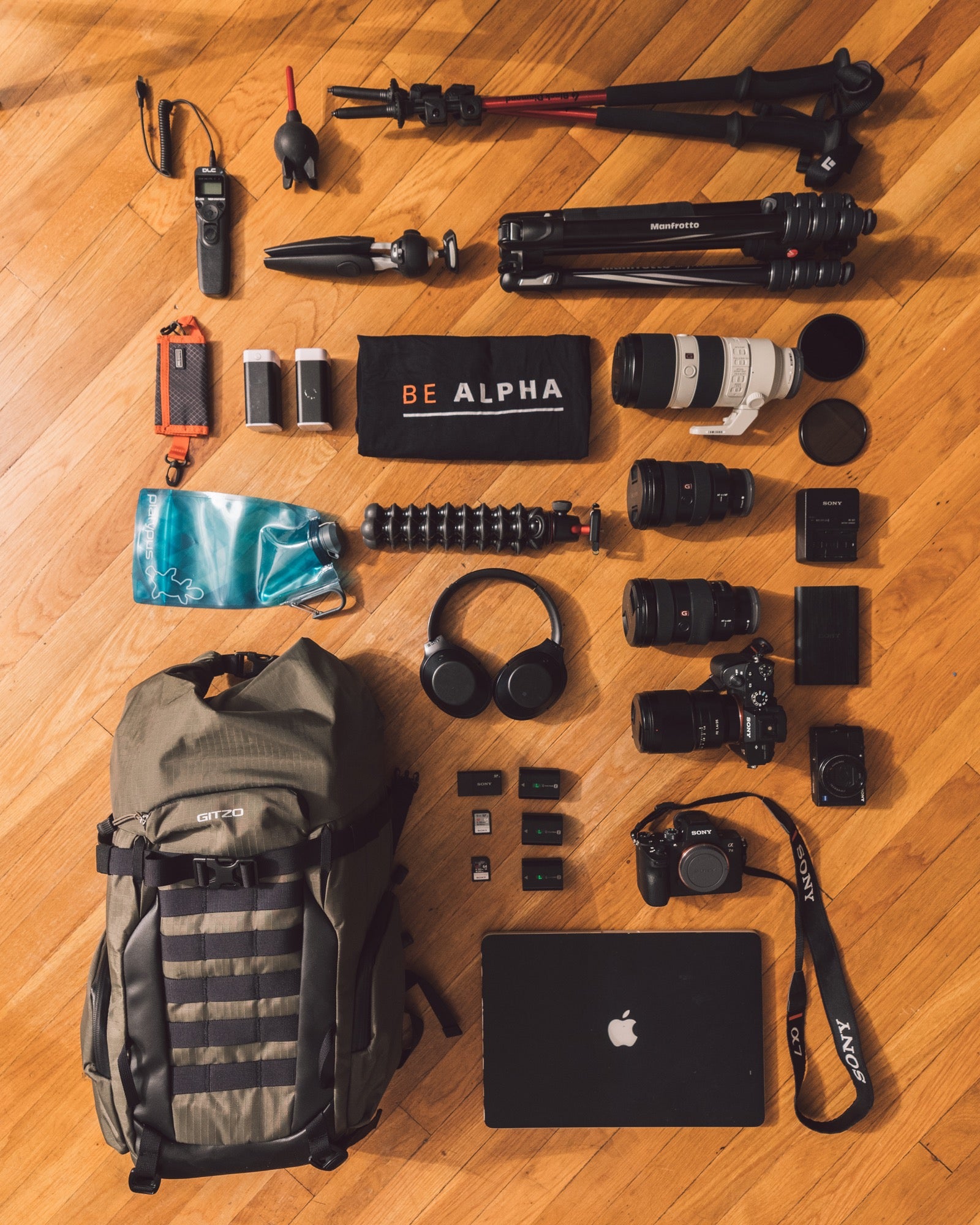 Sony α7R III: I love the α7R III because it has a high resolution, 42 megapixels, which is ridiculous. Whenever I think I might have missed the composition, I can always crop and adjust and I still have plenty of resolution. It has Eye Auto Focus and that's always great for portraits so I can go around and do more lifestyle shots and be more mobile. It's super light. It's just an all-around workhorse of a camera.

Sony α7 III: I've been using the α7 III for my time-lapses. It has 24 megapixels, which is plenty of resolution, especially for extremely-high-res timelapses. I can just set it and forget it. I also like to use the α7 III in low light where I think it excels and when I don't need the 43 megapixels of my α7R III.

Sony RX100 V: In the Canadian Rockies, this was my always with me backup camera. I came in with the plan of executing time lapses most with the α7 III and shooting stills with the α7R III and then I’d have the RX100 V just an in case. It allows me to have a camera in my pocket that’s comparable to any of the other cameras that I use.

Sony FE 16-35mm f/2.8 G Master: I've been using this for most of my timelapses, because I can get a really grand scale and epic perspective in terms of composition which makes for a really interesting timelapse, particularly in a place like Banff.

Sony FE 24-70mm f/2.8 G Master: This lens is my original baby. The 24-70 was my first major Sony lens purchase just because I felt that I could bring it to any event, any type of job, and it's versatile enough to be wide or have a tighter composition.

Sony FE 70-200mm f/2.8 G Master: I bought this lens primarily for music festivals and concerts. It's versatile enough where you can be in a crowd and get really crazy shots from really far away. Same goes in the outdoors when I was in The Canadian Rockies. It allows me to get tight shots of a mountain peak that's being illuminated or wide shots of expansive vistas. I also got because it can take a dedicated 1.4X or a 2X teleconverter, which makes it even more versatile and gives it a very long reach. On my α7R III, I can shoot with the 70-200mm with a 2X teleconverter and in APS-C crop mode and get the angle of view roughly equivalent to a 600mm lens and an 18 megapixel file!

Sony Distagon T* FE 35mm f/1.4 ZA: This native full-frame E-mount lens is super crispy! It performs great in low light and has a creamy bokeh that I don't see in many lenses.

DLC Intervalometer for Sony E-mount: This is critical in allowing me to remotely set the shutter for my timelapses with the α7 III.

Giottos Rocket Blaster Dust-Removal Tool: Particularly when shooting in the outdoors, it’s important to keep a dust blower on hand to keep things clean and clear.

Black Diamond Trekking Poles: I have some recent injuries that I don't want to aggravate to much from hiking so these help take some of the pressure off as I trek.

Manfrotto PIXI EVO Mini Tripod Black: I use this tiny wonder for something that requires low perspective or in a situation where I'm not wanting to carry too much stuff (or if I just forget my larger tripod one afternoon which actually happened on the Collective trip to Canada). It's capable of holding a full-frame camera!

BeFree Advanced CF Manfrotto Tripod: I’ve been relying on this tripod especially when I’m using the heavier lenses and tighter frames. This tripod keeps everything rock steady and I’ve been using it more and more.

Joby Gorillapod 3K kit: I use this in circumstances where I might not have a flat surface. It can wrap around railings and such to keep my shot stable.

Sony Portable Power Banks: Trust me, they've been battle-tested and I’ve always got to have these when I’m traveling. With the duration of the Sony Z batteries in my α7 III and α7R III, I never worry about running out of power, even when I’m shooting a timelapse. My phone and other electronics, on the other hand, frequently need a boost. That’s why I always have these power banks.

Sony Z Camera Batteries: I keep extra batteries on me just in case. One of the great things about the α7 III and α7R III is they both take the same battery and the Z-series batteries the cameras use easily last a full day of shooting.

Sony Camera Battery Charger: I recharge the Z batteries every night, but they seldom need a full charge.

Sony External Hard Drive: Stores all of my media as I go! It’s especially useful t have an external drive when shooting timelapse, because the files can take a lot of storage.

Sony Memory Card Reader - Always have to have this on hand to pull media from each day.

Be Alpha T-Shirt from the Be Alpha event in Brooklyn, NY: I love this t-shirt!

Manfrotto Circular Polarizer and ND Filters for the 24-70mm f/2.8 G Master Series: I have two filters. One is polarizer ND filter that’s just to get more definition in water and during harsh light times of shooting. The other is a 9-stop ND filter to me make long exposures during the day or just have more capabilities in terms of controlling light.

Platypus Hydration Pack: Perfect for traveling and staying hydrated, especially when I’m on a trip when I’m hiking a lot.

Sony Wireless Noise Canceling Headphones: I sleep everywhere. Whenever I travel, I like to have them on the plane especially so nothing disturbs me as I sleep.

Apple 15" MacBook Pro: Have to have my laptop so I can edit as I go!

Gitzo Adventury 30L Bag: This bag fits a ton stuff, and in addition to that, it's sturdy. It carries a laptop, four lenses, two bodies, three tripods.

Phil Yoon is a member of the Sony Alpha Imaging Collective. Follow all of their adventures on Instagram https://www.instagram.com/phil.yoon/.