Seeing Machu Picchu in person is a life-changing experience. After my first trip there, I made a commitment that I would return to capture the ancient Inca city with my camera at sunrise on the winter solstice, a moment around which much of the city was designed and built. Constructed some 600 years ago and all but forgotten and lost for 90% of its existence – each passage and archway in Machu Picchu is perfectly aligned with celestial waypoints and each temple was built to mimic the heavens themselves. The Inca culture held the Sun and the Moon above all other spirits, and as one explores the empty streets of the ancient city it quickly becomes apparent that worship for the Sun and Moon was first and foremost in their minds as they built Machu Picchu. When I returned with my Sony α7R III and my Sony 12-24mm G lens, I wanted to create a special image to convey some of the feeling of being there at that inspired moment. It took me over a year, to return to Machu Picchu, and the image I ended up creating is all the more important to me, because I almost didn’t get there.

After all the planning and the excruciating ordeal to reach this moment, it was tempting to fire off a thousand photos, but there was no need. A well planned shot only needs a single exposure to be executed well. 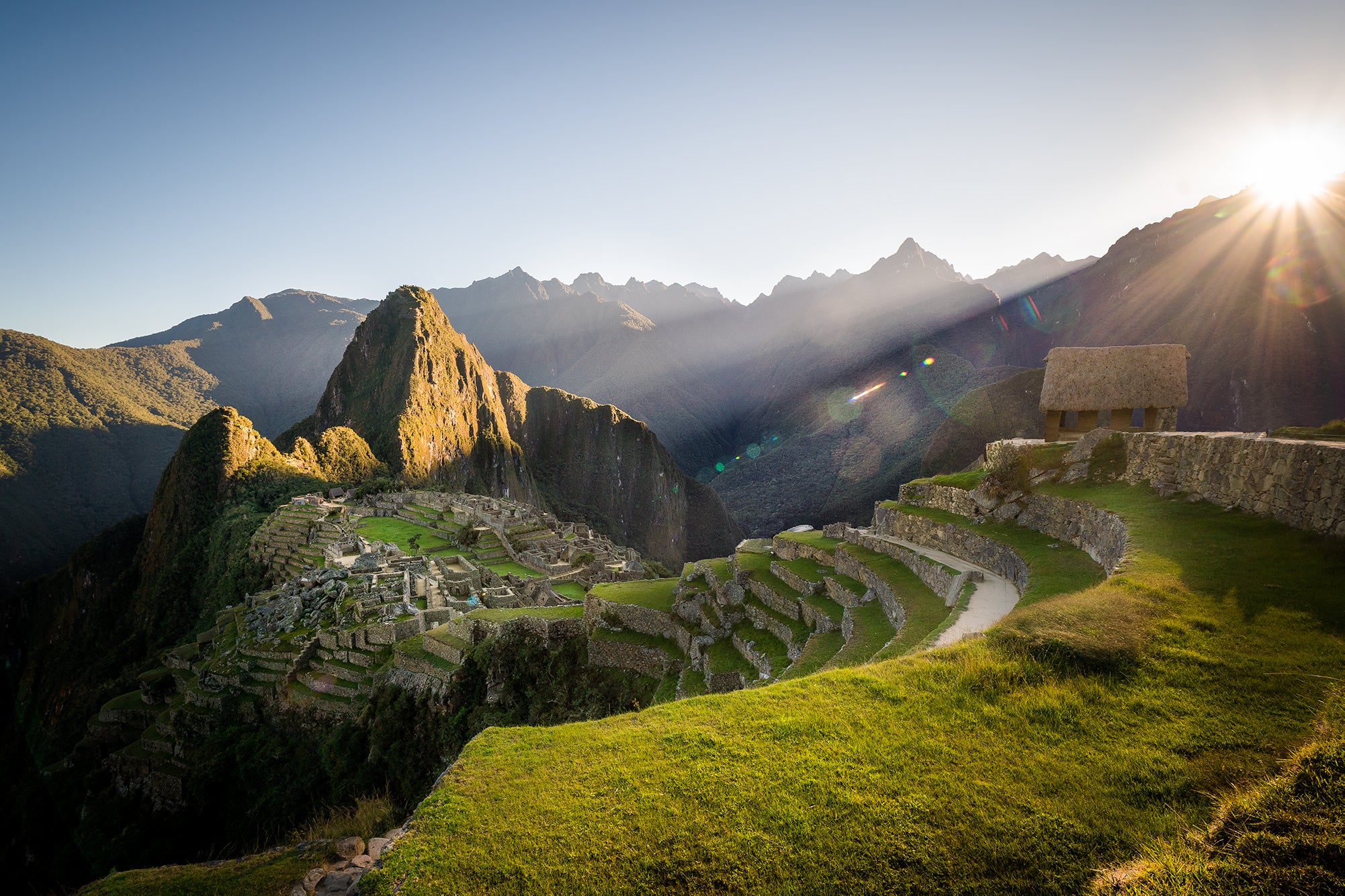 The winter solstice was considered the holiest of all days, and the Inca people celebrated with the biggest festival of the year: Inti Raymi. At the heart of Machu Picchu lies the Temple Of The Sun and at dawn on the winter solstice, the sun rises, perfectly aligned with the peaks across the valley, and shines directly through the windows and illuminates a ceremonial stone at the heart of the temple. The ceremonies of Inti Raymi have continued in the city of Cusco, and although Machu Picchu was lost for several hundred years, the solstice is still considered the holiest of days in Peru.

Determined to capture that sunrise, I got into the logistics and planning for my trip. Getting to Machu Picchu is extraordinarily difficult, partly due to geography and partly due to bureaucracy and crumbling infrastructure, so I partnered with Killa Expeditions, a local guide company who specializes in getting motivated explorers to difficult places. I studied every photo of Machu Picchu I could find to plan my shot and dove deep into the plan of the city. Although I wanted to watch the first rays of light hit the ceremonial stone, I didn’t think that was the most photogenic and inspiring view. I decided to capture a more broad scene, with the sun cresting the summit across the valley, and illuminating the city itself. I settled on my Sony 12-24mm f/4 G lens for this project because the wide-angle field of view would help me capture both the enormity and the solitude of this city in the clouds. The α7R III was a perfect pairing, providing ample resolution for large prints, and the broad dynamic range to prevent blowouts while shooting into the sun.

After a year of planning and anxious anticipation I headed back to Peru to begin my journey. I spent a month trekking through the Peruvian highlands with Killa Expeditions, retracing ancient footpaths worn into the earth by the Inca people. I visited a dozen ancient temples and lost cities, traveled to isolated villages where the inhabitants still speak Quechua, and I accompanied a shaman for a ceremony to give thanks to the earth-spirit Pachamama. Then it almost all fell apart.

A few days before the solstice, while camped at nearly 16,000 feet (4,900m) on the flank of the mountain Ausangate (considered the chief spirit of the mountains) I became deathly ill. Although I didn't know it at the time, I had contracted both a bacterial infection and an intestinal parasite which would eventually result in me losing over 20% of my total bodyweight. I spent several sleepless nights and excruciating days in the mountains struggling to get to the gates of Machu Picchu. I felt like I could barely stand, but I was determined. A once-in-a-lifetime opportunity isn't to be taken lightly, and I decided I was going to crawl to the top of that city if I needed to.

The Final Push To The Sunrise

On the morning of the winter solstice, I met my guide at 3:30am to begin our journey into Machu Picchu. The combination of adrenaline and excitement powered me through the illness, up the (seemingly infinite) stairs and to my desired vantage point at the top of the city. I arrived nearly an hour before sunrise to stake my spot and wait. I stood there in the twilight, legs shaking and body shivering, listening to the familiar calm that swallows the Earth in the moments before daybreak. I put the 12-24mm on my α7R III, adjusted the settings and as the sun began to crest the mountains in the distance, I took my shot.

After all the planning and the excruciating ordeal to reach this moment, it was tempting to fire off a thousand photos, but there was no need. A well planned shot only needs a single exposure to be executed well. I knew I had gotten what I came here for, and this is forever a photo I will be proud of.

Nate Luebbe is a member of the Sony Alpha Imaging Collective. You can find his work at www.NateLuebbe.com and on Instagram @nateinthewild. Prints of this photo are available here.

Party On Top Of The World

Party On Top Of The World