This week’s Instagram Follow Friday features a Sony Artisan who posts unique NYC street photography, an Alpha Collective member who captures his subjects floating in midair and another sharing the different scenes he comes across on his travels, a Sony wildlife photographer and another Sony shooter documenting the beauty of Norway. You can be featured on Alpha Universe too! Just make sure you tag your Sony photos with #BeAlpha and follow @sonyalpha!

Endre is a photographer based in Bergen, Norway. He posts beautiful captures of both cityscapes and landscapes from Norway, in both day and night. He sometimes brings out his drone, which he uses to take panoramas from incredible perspectives. He took the photo below using his Sony α7 III and Sony 24-105mm f/4 G lens.

Erick is a commercial photographer and member of the Sony Alpha Imaging Collective. His Instagram account is filled with portraits and product shots that are a ton of fun to scroll through. In many of his photos the subjects appear to be levitating, which makes for fun and unique photos that stand out from the rest. Give him a follow for an account that always keeps it interesting!

Oveck Reyes is another member of the #AlphaCollective who is a visual artist and storyteller. He posts photos from his travels that provide valuable insight into other cultures and capture the different scenes you’ll find all over the world. The subtle and moody tones of his photos give them a complexity that makes you stare for awhile. Give him a follow for more great content!

Katrin Eismann is a Sony Artisan of Imagery. She’s the founder and chair of the Masters in Digital Photography department at the School of Visual Arts in New York City, and her Instagram account is filled with street photography taken in the Big Apple. She’s really great at capturing interesting cityscapes and photos of city goers that aren’t the same NYC street photos you always see. She took the photo below with her Sony RX100 VI. 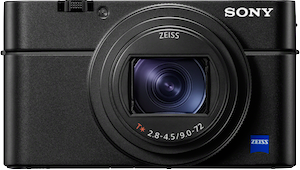