I don’t do reviews, nor am I a pixel peeper—I’ve always been more interested in my equipment’s performance in the real-world than in some artificially created test (not that there’s anything wrong with that). But I must say, there’s nothing quite like opening an image for the first time, magnifying it to 100% on a 38” monitor, and feeling like the detail just doesn’t quit. That’s the experience I had viewing my initial Sony 12-24mm f/2.8 G Master images. The story of how I made those first images is a story of 2020 and delayed gratification.

“I feel like this lens could resolve to 80 megapixels (and beyond) without even working hard….the detail seems infinite.” Landscape pro Gary Hart 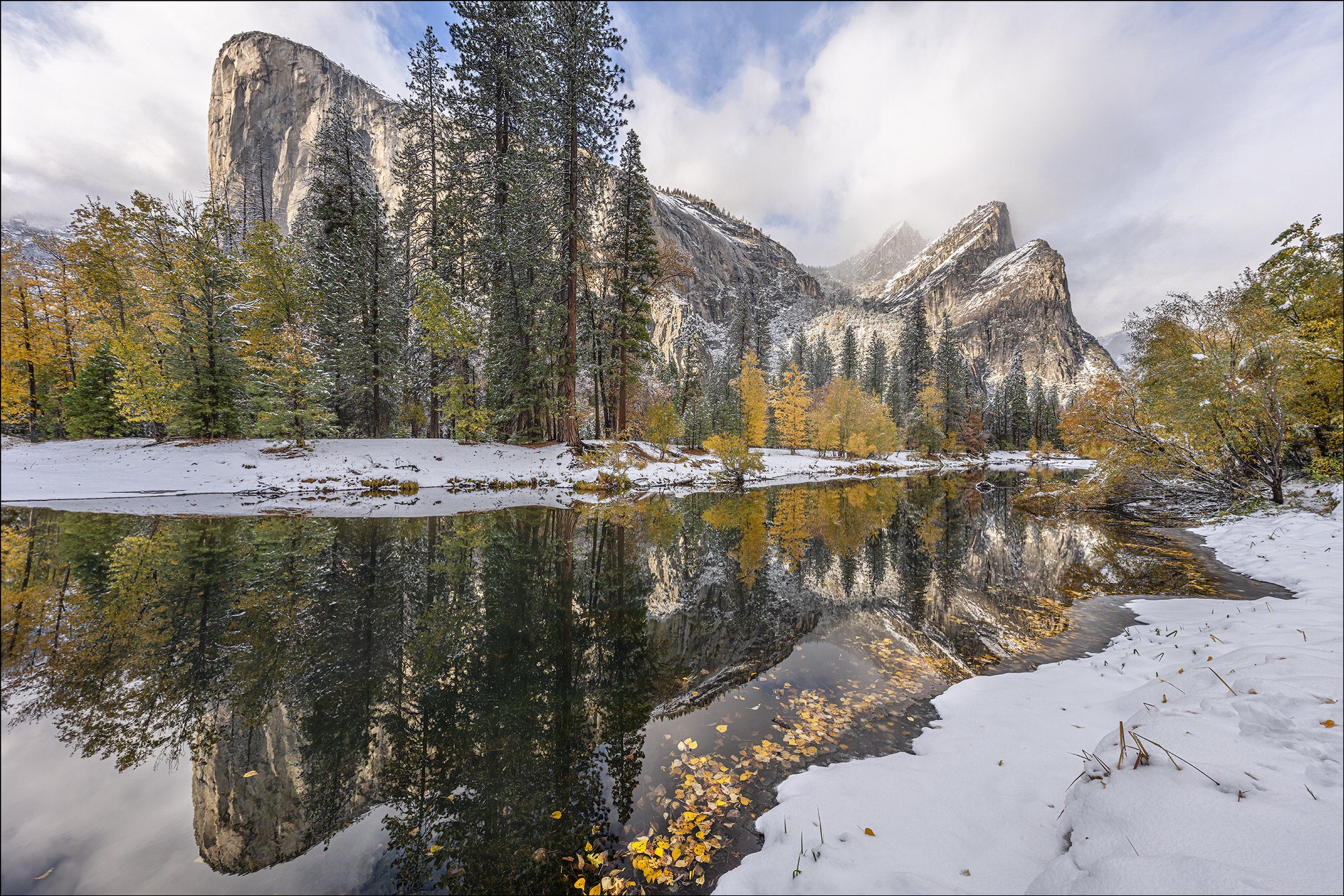 Few things set a photographer’s heart racing more than new gear. Some photographers spend this energy by instantly ripping their new camera or lens from its box and pointing at the closest target (because the world can always use more cat pictures). I fall into the camp that likes to savor the moment, scouring the manual and obsessively reconfiguring my camera bag, then painstakingly plotting a trip to the ideal location to christen my new toy. And the more excited I am about a new piece of equipment, the more selective I am about its maiden voyage.

So imagine my frustration in August, when my brand new Sony 12-24mm f/2.8 G Master lens arrived in the middle of a global pandemic. Due to COVID restrictions, my chosen destination, Yosemite National Park, required reservations two months in advance. Other worthy locations were closed, or simply impractical to visit in a pandemic. So, with the documentation memorized and my camera bag organized to within an inch of its life, I waited. And waited….

When It Comes To Landscape Photography, Good Things Come To Those Who Wait

Summer passed, taking with it some of the night photography I love so much, and that the 12-24 GM is so suited for. As autumn approached, my thoughts returned to Yosemite. And when the National Park Service removed the Yosemite reservation requirement on November 1, I instantly checked the forecast for Yosemite Valley and did a doubletake—in less than a week a cold storm was expected to drop 3-7 inches of snow, a rare opportunity for so early in the season. Better still, early November is right in the peak fall color window. Fall color, fresh snow, and a new lens? Sign me up. 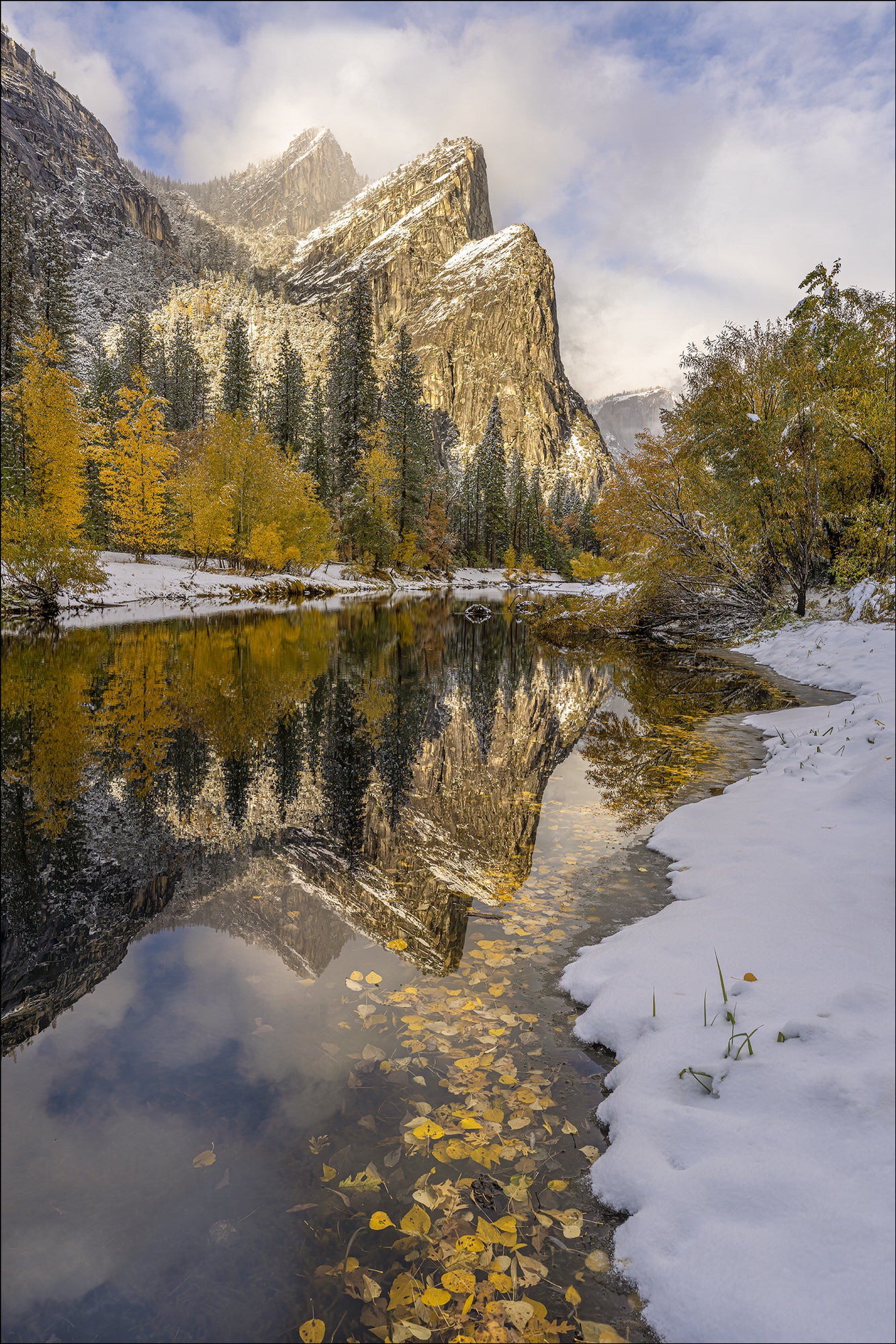 Yosemite Valley probably offers more beauty per square mile than any location on Earth. But all this beauty in such a confined space means that from many of Yosemite Valley’s best views, squeezing the soaring granite into a photo is a real challenge. That problem is compounded when you want to add a reflection to the image. For years my widest lens was 16mm, which in claustrophobic Yosemite Valley forced me choose between my subject or its reflection at many of my favorite views. A 12-24mm lens is a godsend for these scenes.

In a typical year, Yosemite’s waterfalls are down to no more than a trickle by autumn, most are completely dry. Since this year was especially dry, I knew waterfalls weren’t in my future—but that low water also means a slow, reflective flow in the Merced River. Combine these ubiquitous reflections with the vivid yellows and reds of Yosemite’s oak, maple, cottonwood, and dogwood trees, and, even without waterfalls, you have what might just be my favorite conditions for photographing Yosemite. Unless of course I can have fresh snow.

I didn’t have to drive too far into Yosemite Valley to know that the snow falling on fall color was the stuff of my photographic dreams. My first stop that morning was El Capitan Bridge, a must-stop for El Capitan reflections in the Merced River. As the closest easily accessible top-to-bottom view of the massive granite monolith, El Capitan Bridge is made to order for the Sony 12-24mm GM. But the storm that had already dropped a couple of inches of snow was still active, wrapping El Capitan in clouds.

After little success photographing El Capitan’s barely discernable outline from the upstream side of the bridge, I crossed the road and set up on the bridge facing downstream. The tops of Cathedral Rocks were smothered by clouds, but its granite base was clearly visible, framed by golden oaks. In the foreground, rafts of pine needles and autumn leaves floated by so slowly that their movement was barely perceptible. 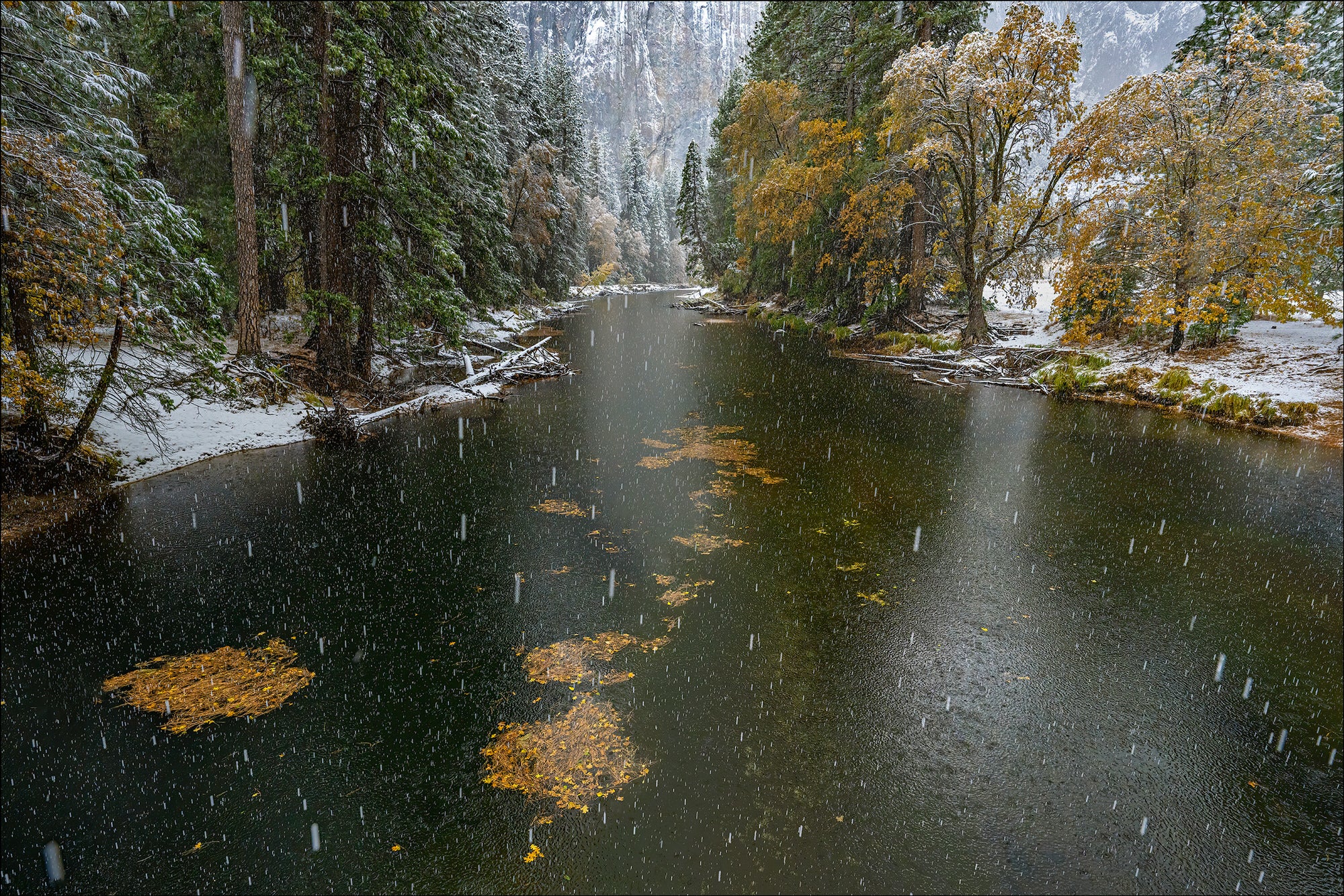 I composed the scene in the viewfinder of my Sony Alpha α7R IV, starting at 12mm and slowly tightening the composition as I zoomed to 16mm. As I worked the scene, the snowfall intensified and I started increasing my ISO from 100 to 1600 in one-stop increments, increasing my shutter speed correspondingly to capture a range of motion-blur in the falling flakes from long streaks to short dashes.

Satisfied with this scene, I looked upstream and saw El Capitan emerging from its shroud. I raced back across the bridge and scrambled down to the river, setting up at a stationary swarm of floating leaves I’d identified earlier. Dropping my tripod close to river level, I switched my camera’s orientation to vertical, widened the lens to 12mm, and peered through my viewfinder. After years of viewing this scene at 16mm, seeing the top of El Capitan all the way to the bottom of its reflection at 12mm felt like an epiphany. 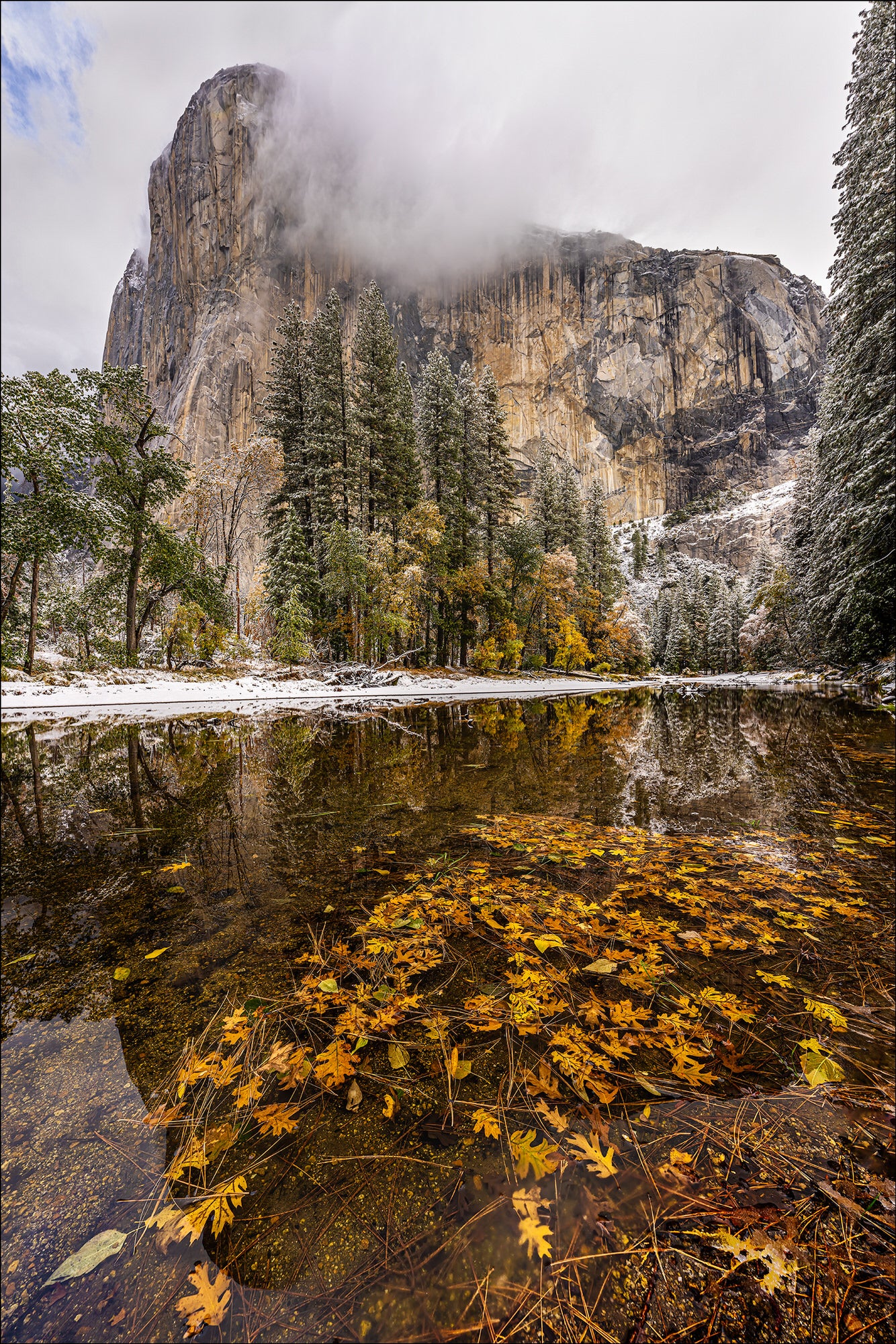 I left El Capitan Bridge feeling like I could drive home that instant and the trip would have been worth it. But of course I didn’t do that. The rest of the day is a blur, as snow showers waxed and waned, continuously refreshing the winter glaze and creating so many clearing storm events that I lost track.

A car can circle Yosemite Valley in less than 30 minutes (except in summer, when you might be able to circle the valley faster on foot than by car). So during storms I’ve learned to strike fast and keep moving, because no matter how spectacular the photography is right here, it’s just as good at the next spot.

All day I had a blast finding fresh takes on familiar scenes. Both in autumn and during snow storms, Yosemite offers lots of telephoto isolation opportunities, but today was about my new 12-24mm GM and my stops were biased more toward wide angle views of El Capitan and Half Dome. 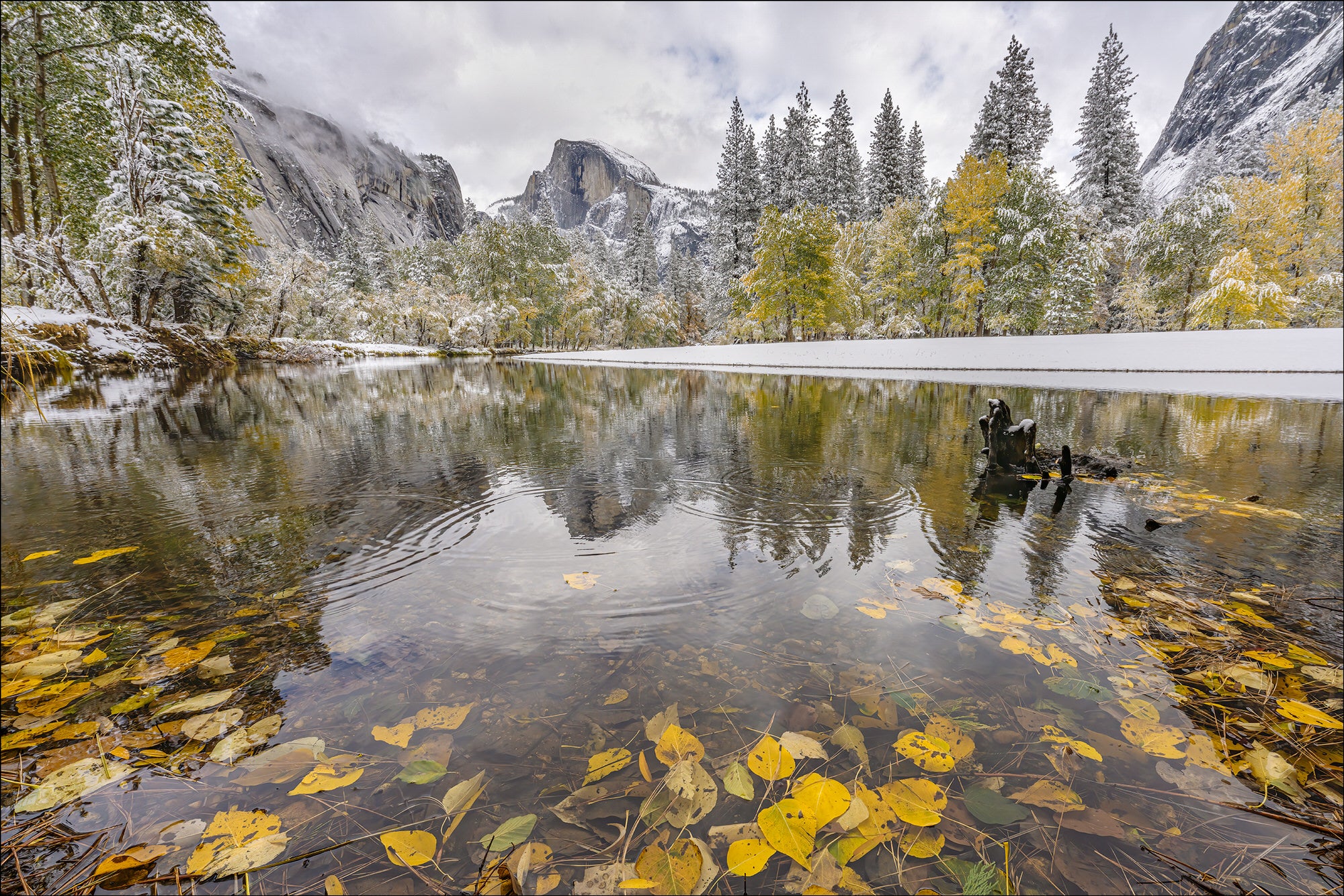 I still can’t get used to how much wider 12mm is than 16mm, and the difference those extra 4mm can make. Sometimes I created wider versions of familiar, formerly 16mm compositions, but often I’d find a completely different take on these oft-photographed scenes. And rather than limit myself to just ultra-wide compositions, I took full advantage of the entire 12 to 24mm range of my new lens.

The Sony 12-24 f/4 G is a fantastic lens, super sharp with minimal distortion, and I’d recommend it to anyone. But I think it takes the resolution of the Sony α7R IV to fully appreciate what this 12-24mm f/2.8 GM lens is capable of. So far I’ve processed around a half dozen images from my day in Yosemite, each one corner-to-corner sharp with so much detail that I feel like this lens could resolve to 80 megapixels (and beyond) without even working hard. The best way I can describe the experience of viewing these files is to compare it to the way medium format files blow me away with detail that seems infinite.

I’m so glad I waited to use my new lens, and feel extremely fortunate that I was able to do it at a location I’ve photographed my entire life, in conditions I can’t imagine ever topping. My next goal is to take my Sony 12-24mm GM and my new Sony α7S III out after dark to photograph the Milky Way—perhaps from the bottom of the Grand Canyon, or somewhere (anywhere) on the South Island of New Zealand. I can’t wait for 2021.