Drew Simms (@drew.simms) has spent the last three years living full time out of his Jeep Wrangler as a professional photographer and filmmaker. As a creator on the road, he captures his adventures through vlogs for his YouTube Channel and stunning images and videos using his Sony Alpha gear. We wanted to learn more about the gear he uses for his work and how he stores it all in his Jeep. See the gear that’s in his Jeep below and learn more about Simms in his Alpha Profile Spotlight. 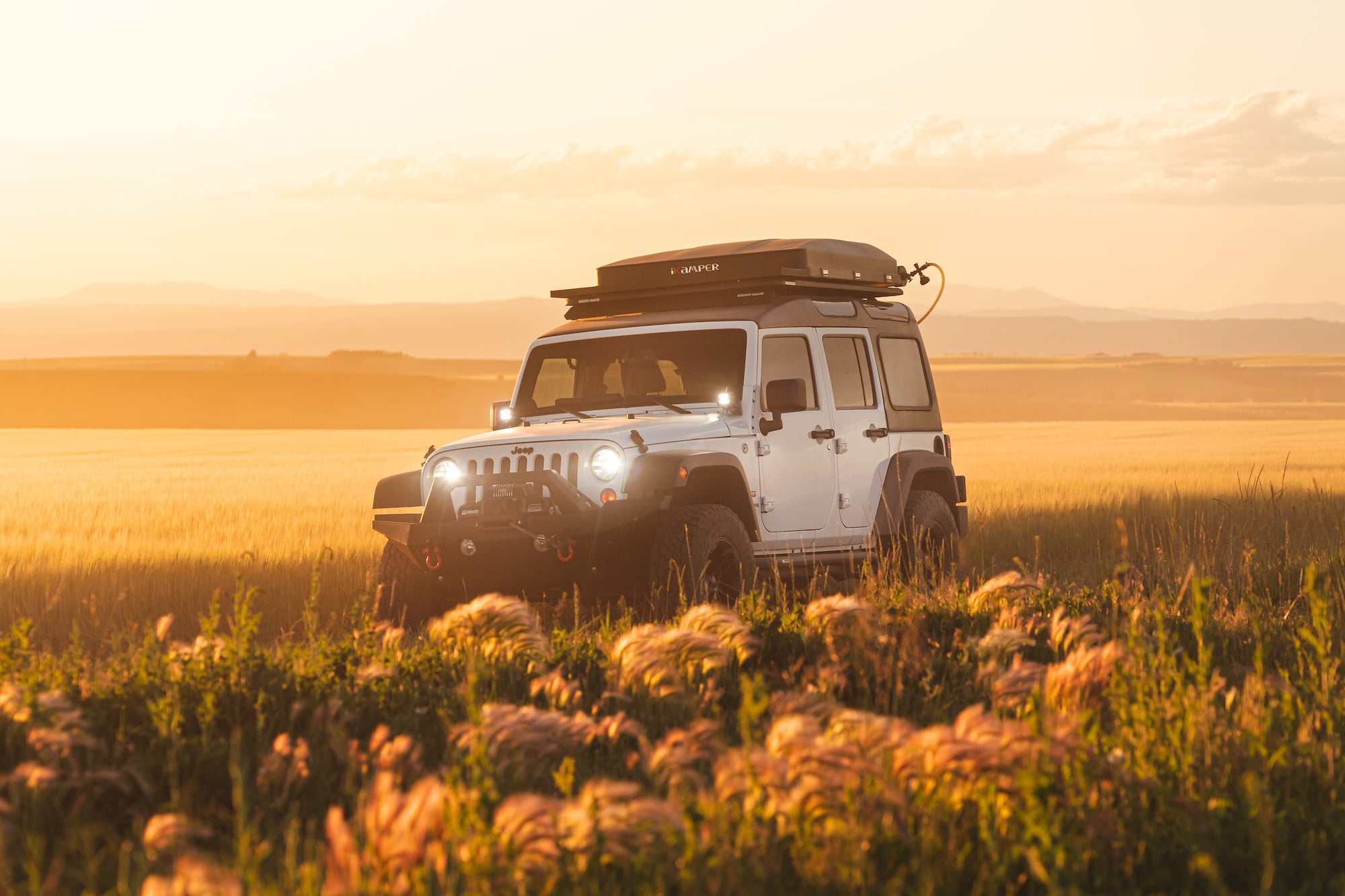 See the cameras and lenses that vlogger, photographer and filmmaker Drew Simms uses to show how he lives a life of backcountry adventure. 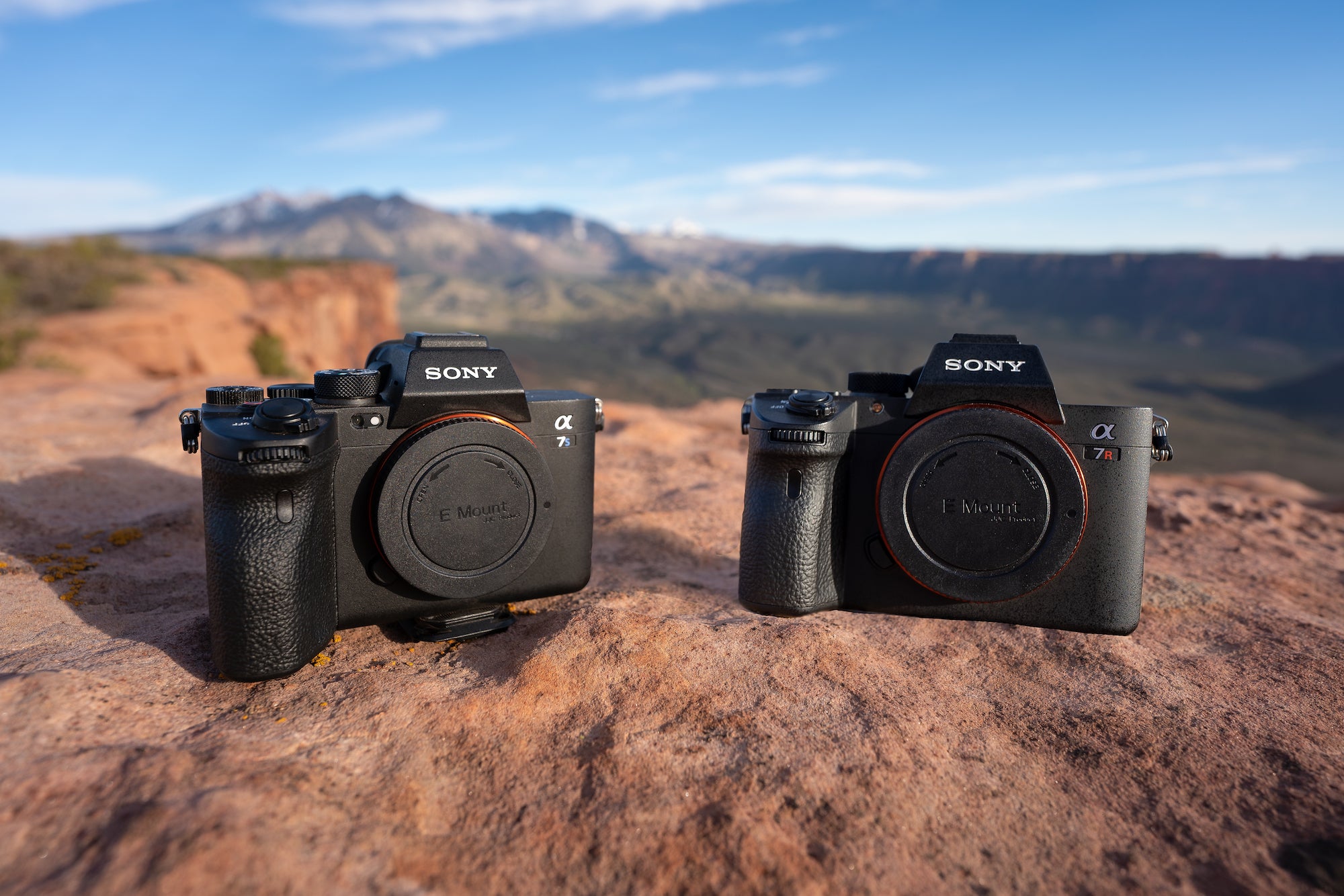 Sony Alpha 7 III: As I mentioned I recently upgraded, but I spent the last three years primarily shooting with the Sony Alpha 7 III and wanted to include it. To me, this is the best all-around camera Sony has ever released. Having the ability to shoot high-quality video and photo all with one compact camera body is pretty tough to beat. I would say I definitely put the weather proofing capability to the test over the last few years. From backcountry trips in the mountains, to wind and sand filled desert conditions, all the way to shooting through snowstorms, the Alpha 7 III always seems to get the job done. I have gotten more into the video space over the last few months so that’s why I recently made the upgrade. I’m sad to see the Alpha 7 III go, but it makes more sense at this point in my career to have two set ups. I am excited to see what these new cameras are capable of, but I will always recommend the Alpha 7 III to anyone looking to shoot both photo and video in one camera! 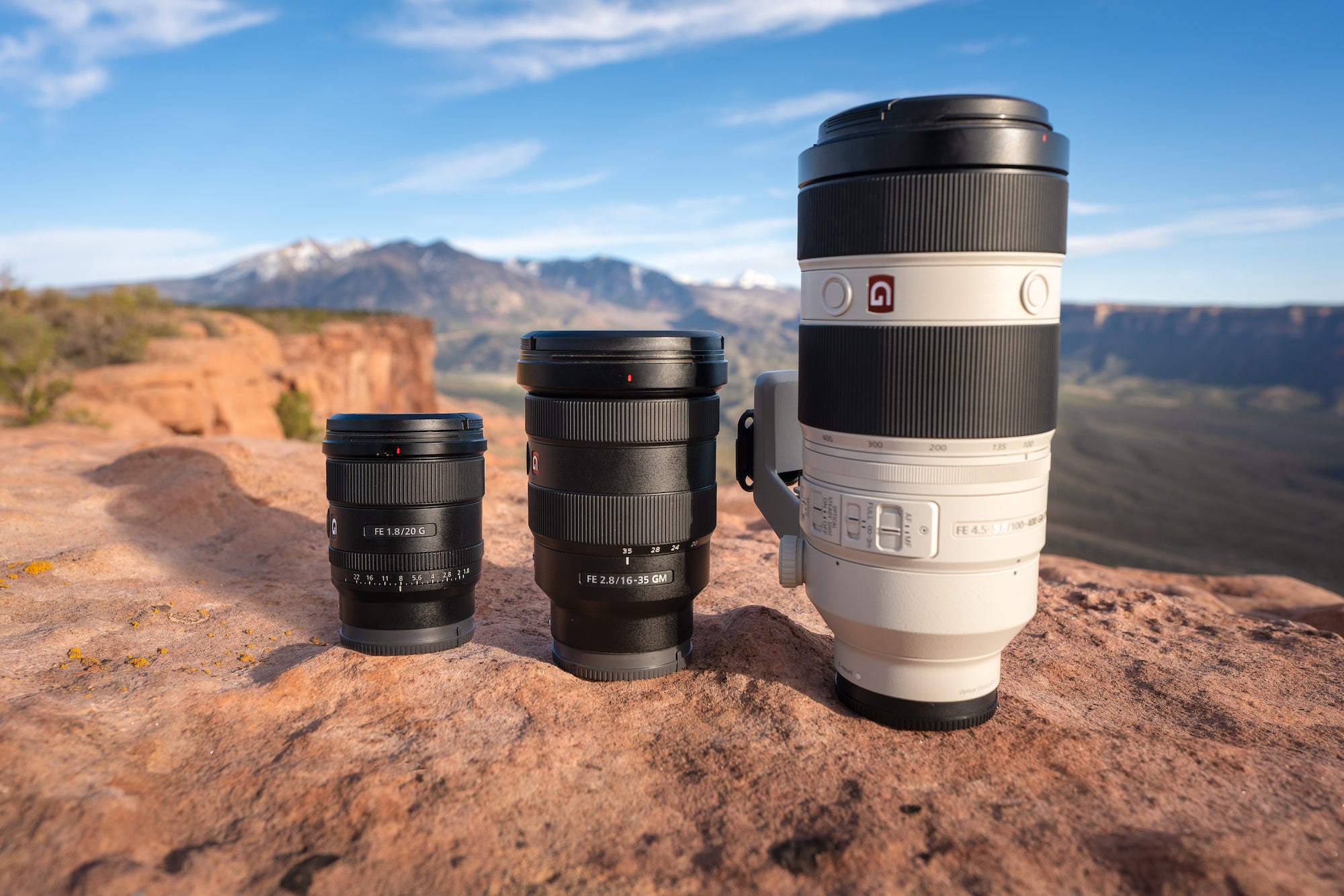 Sony 20mm f/1.8 G: This has slowly become my favorite lens over the past year. I have never owned a prime lens before this, and was very hesitant in buying one, but can’t express how much of a beast this lens is! Astrophotography with the 1.8 aperture at 20mm is ridiculously sharp and the lack of noise in the RAW images is incredible. I had also never shot video with a lens with such a shallow depth of field before the Sony 20mm. Needless to say, this has become my go-to lens for filmmaking as well as vlogging. Its compact size also makes it great for using it on a gimbal setup. 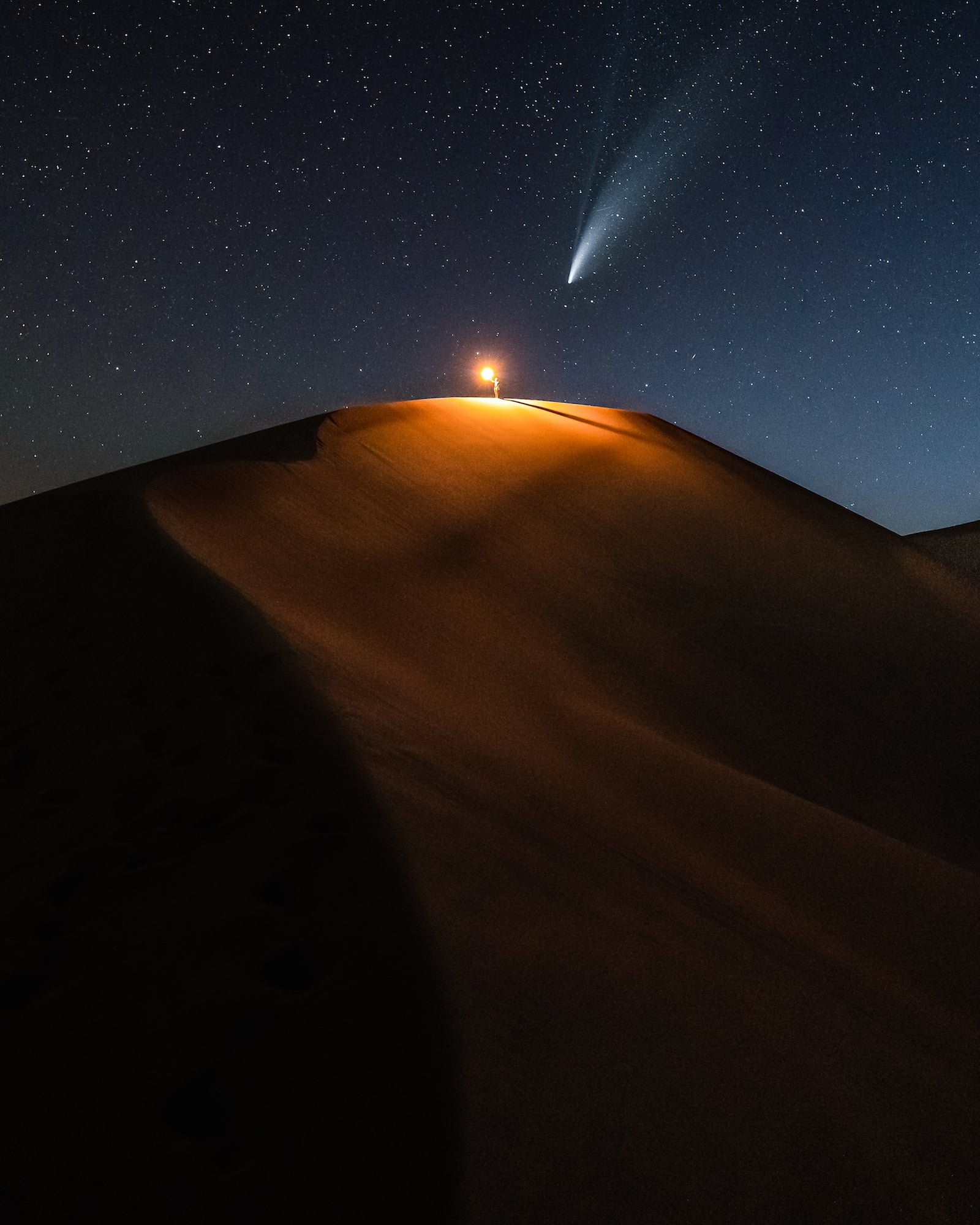 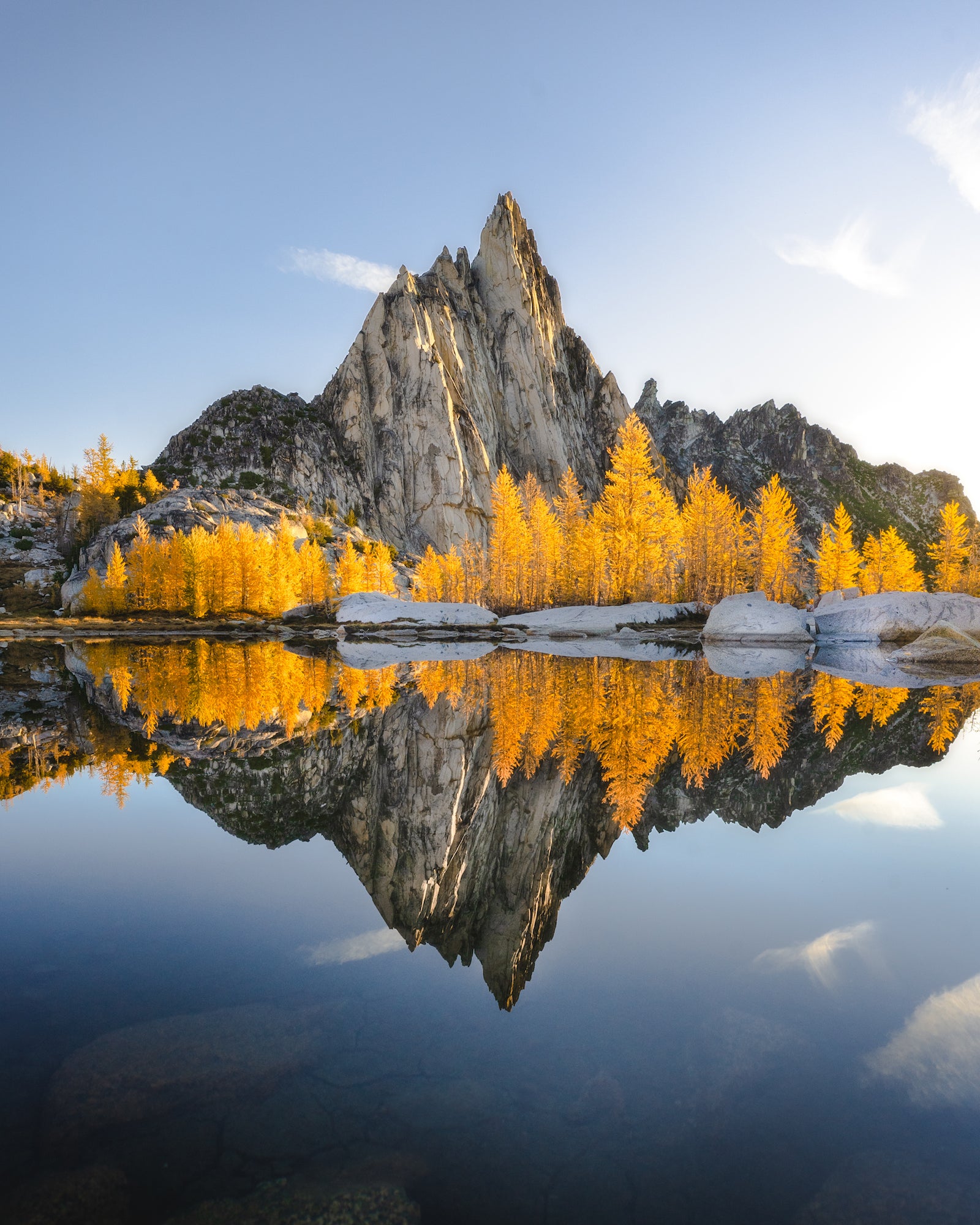 Sony 16-35mm f/2.8 G Master: I just recently got this lens about six months ago. Before this, I had the Sony 16-35 f/4 and really enjoyed using the lens. After absolutely beating it up over the last five years, I figured it was time for an upgrade. f/4 vs f/2.8 doesn’t seem like a huge difference, but in the past six months I have definitely seen one with the new Sony 16-35. Having the ability to shoot wide at 16mm and then punch in to 35mm to get a bit more compression makes this my go-to lens for shooting landscapes. The 2.8 aperture also makes it a great lens for astro as well as filmmaking. 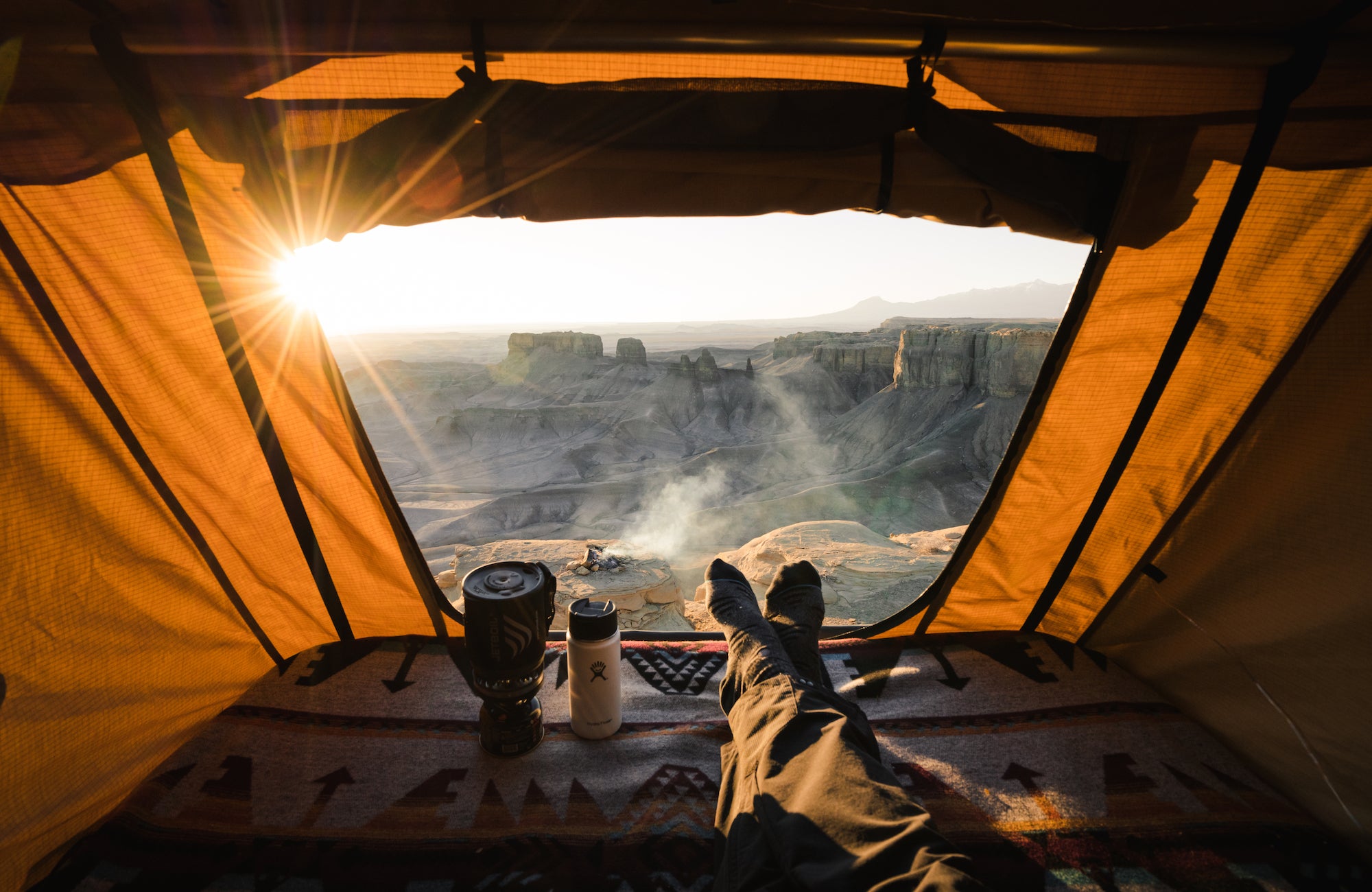 Sony 100-400mm f/4.5-5.6 G Master: I have really been enjoying using the 100-400mm for landscape photography. I just recently upgraded from the 70-200mm and already am impressed out how much more compressed a scene can become at 400. Can’t wait to start shooting more with this lens!

Sony 70-200mm f/4 G: As I said I just upgraded from this lens to the 100-400 so it’s not in the photo, but I used it a lot and still wanted to include it. The 70-200mm f/4 allows me to combine my two favorite things to shoot, my jeep and the massive landscapes of the US. The compression you get from using a telephoto lens while still keeping detail and focus on your subject, makes it my go-to lens for shooting the Jeep. I’ve also carried this lens plenty of times with me into the backcountry and love the unique perspectives you can shoot at 200mm in the mountains. 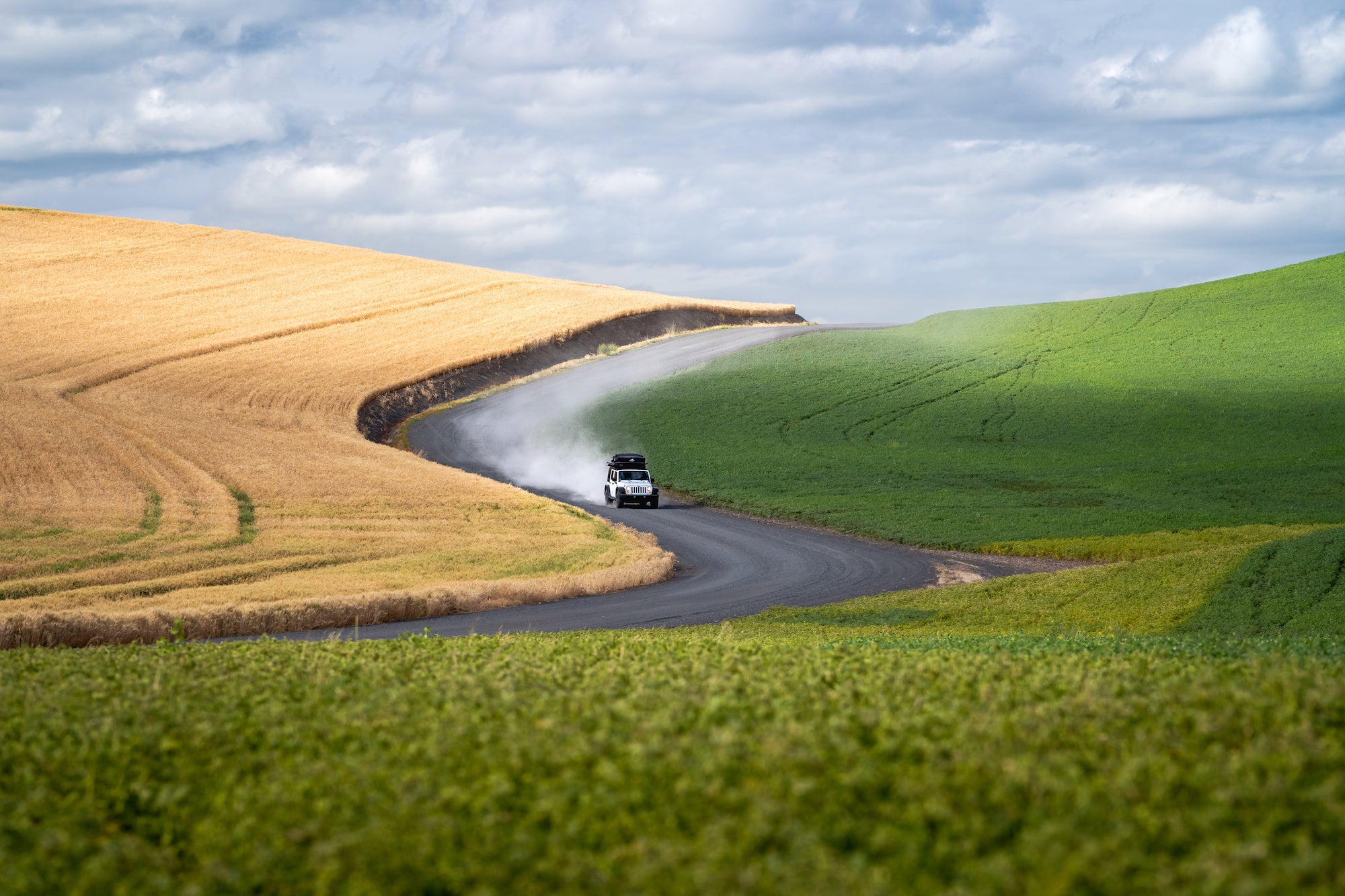 Jeep Setup: Back in spring 2018, I put 250+ hours into redesigning my soft top jeep from scratch, adding a pull-out kitchen, a closet, interior bed, shower, roof top tent and much more, to make it into what it is today, my home. A recent upgrade, that has become my favorite feature of the build, is the camera storage drawer. Having a designated place for all my gear to go that is organized and that can be locked up has been a great addition. 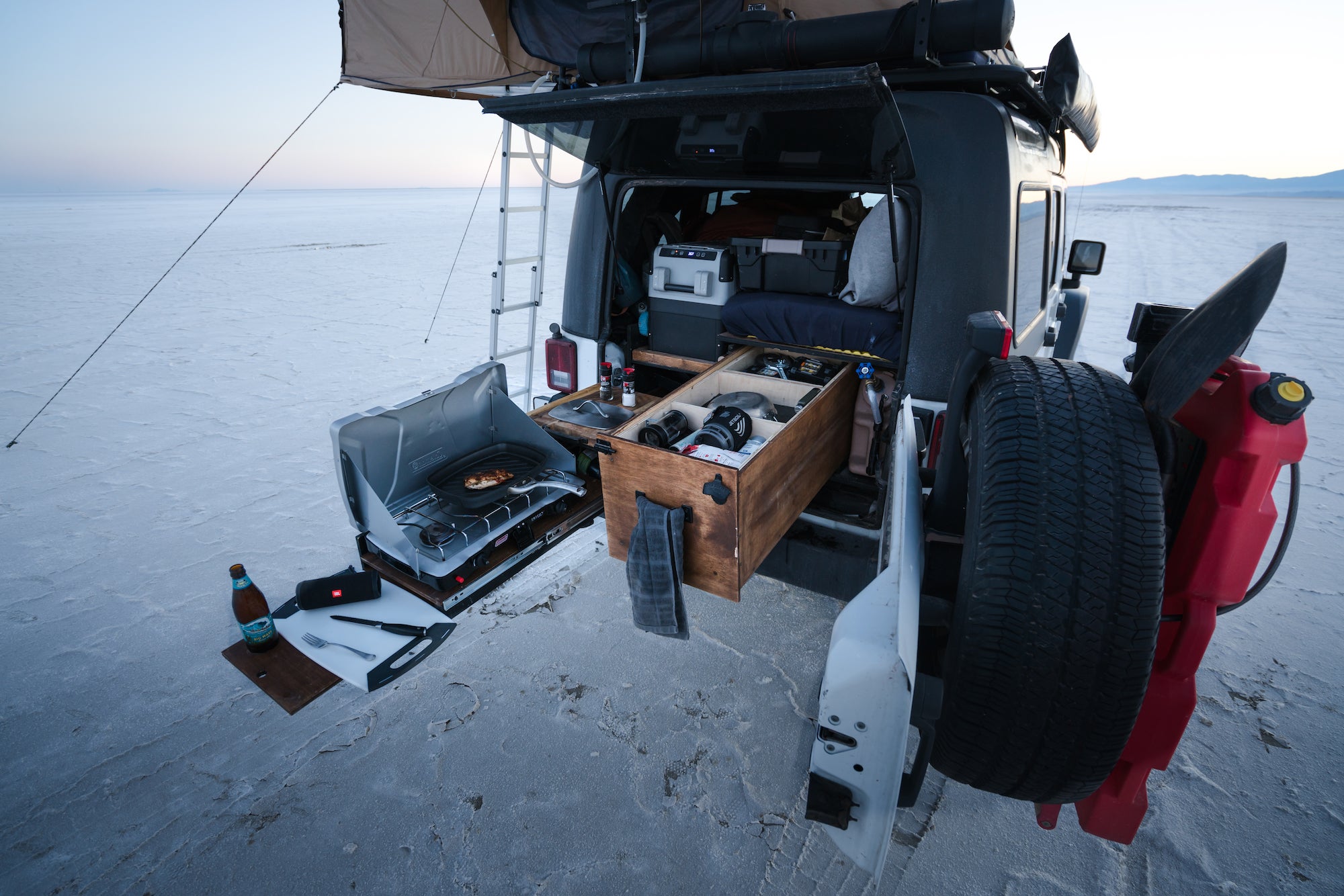 Camping Gear: I had only gone camping twice before hitting the road full time back in 2018, but now, backcountry camping has become one of my favorite parts of road life. There’s really nothing I would rather be doing more than loading up a 65-liter pack with camping equipment, food, and as much camera gear as I can carry, and heading up into the mountains for a few days. 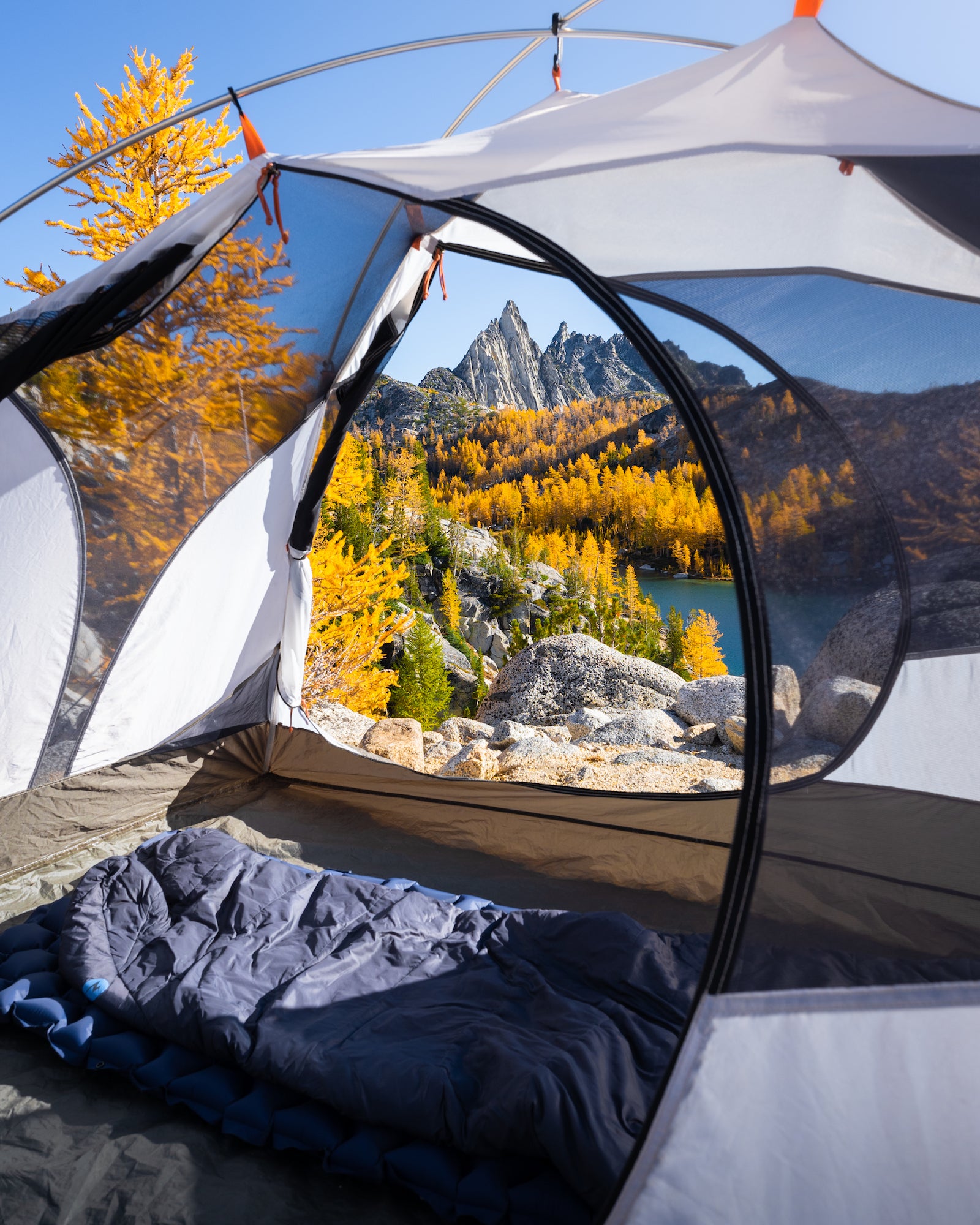 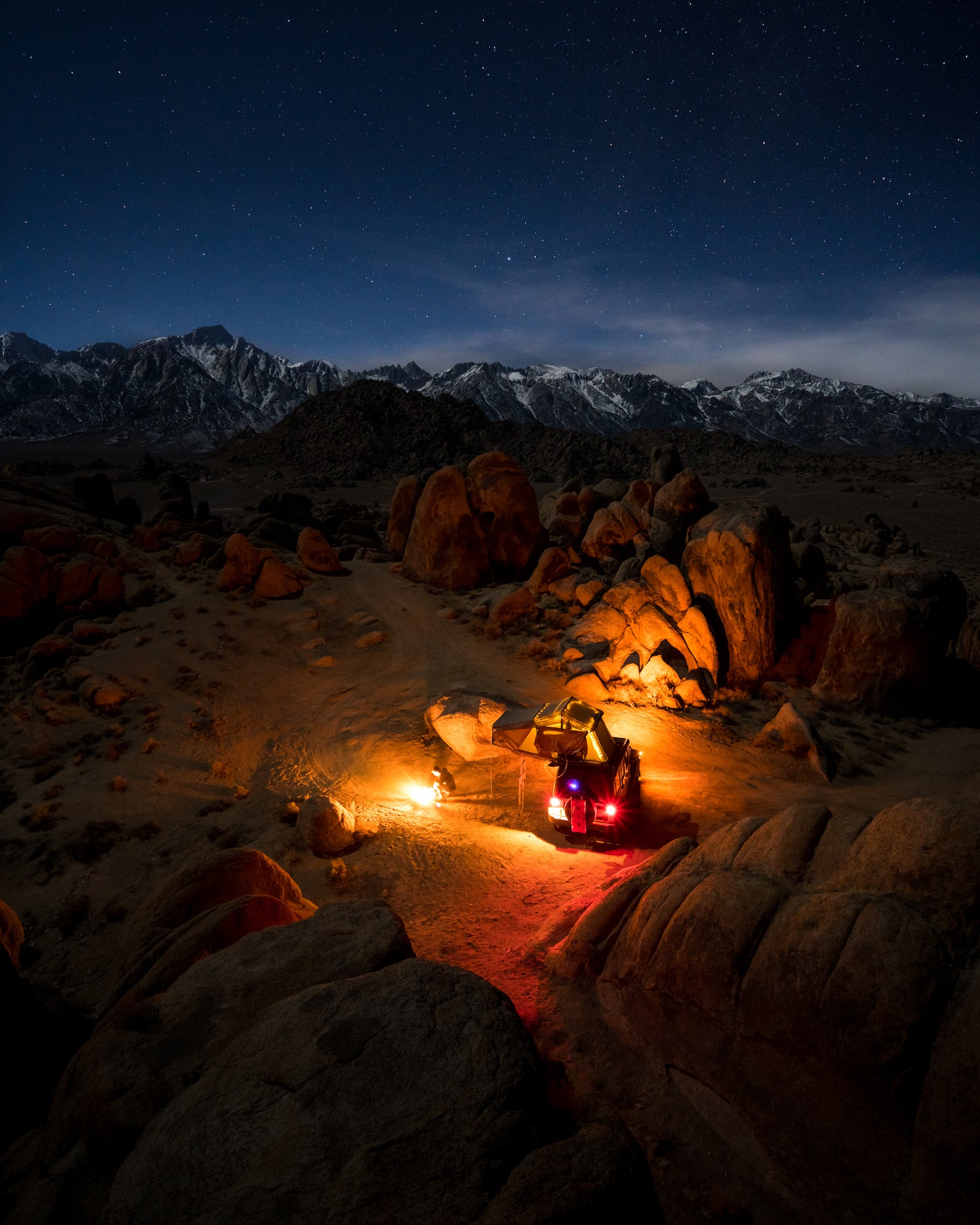