The first part of this article will explain some of the motivations for taking on such a project. I’ll begin by explaining how a view camera is made. If you want to see the hack and results, skip ahead to Part II.

PART I: Camera Movements In Photography And The Value Of A View Camera

Let’s talk briefly about how a camera works, and let’s consider a view camera (also called technical camera). For those who are not familiar with such cameras, here’s a description. 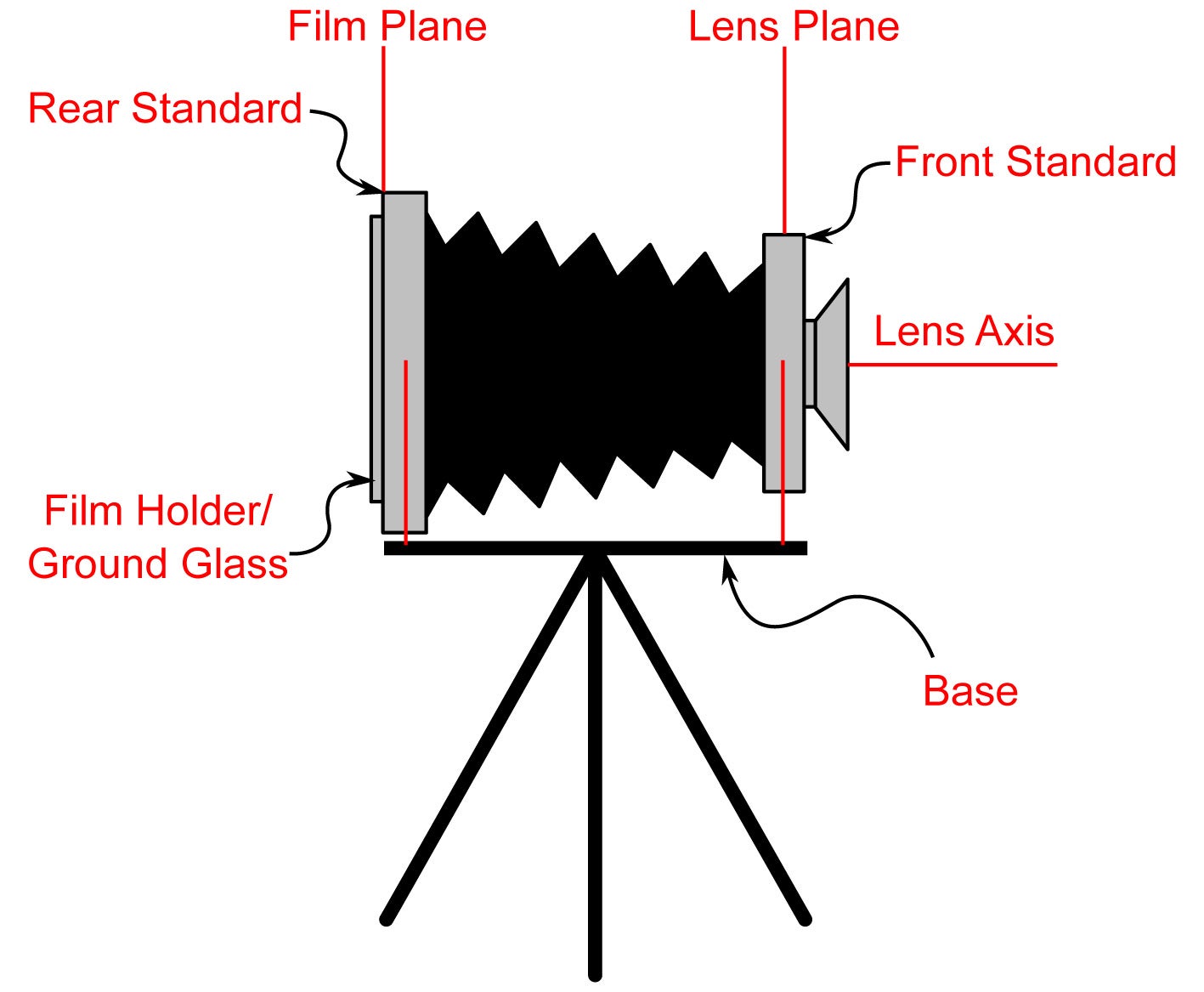 A view camera is made of a front standard which holds a lens, and bellows that ensure the image projected from the lens goes without interference to a rear standard containing film or a digital sensor. What makes this type of camera special is the ability to move the front and rear elements independently to create extreme tilts and shifts.

I use tilt and shift very often in my photography for many different reasons: to avoid converging lines in architecture (when pointing up or down), to expand the field of view, to introduce blur and therefore mystery in my images, etc. But the amount of tilt and shift available with specialized and EXPENSIVE SLR lenses is limited, and frequently for me, thiose lenses just aren't enough. So how could I get around those limitations? By using lenses that have a much bigger image circle, such as medium format and large format lenses, and a contraption that lets me control and move these lenses (or the camera).

This is not a new idea. There are many such solutions available out there, but I find that they are all expensive, and I wanted to dust off some of my older lenses and put them to good use with my modern mirrorless cameras, without having to sell a kidney.

So here was my idea: build a view camera that will virtually let me mount ANY lens on my modern digital full-frame mirrorless cameras, so I can use both TILT and SHIFT movements at the front and rear elements.

After some online research, I found that some people have hacked a Fuji GX680 body into doing something like this. I got a fairly cheap (around $200) used Fuji GX680 III body which was a bargain compared to a $2k+ tilt/shift lens, and I stripped off its different elements entirely and modified it in order to keep only the base body and moving elements. A quick note of caution: To make my camera I did a fair amount of work with potentially dangerous power tools. Be sure you know how to use such tools before trying to do something similar yourself. 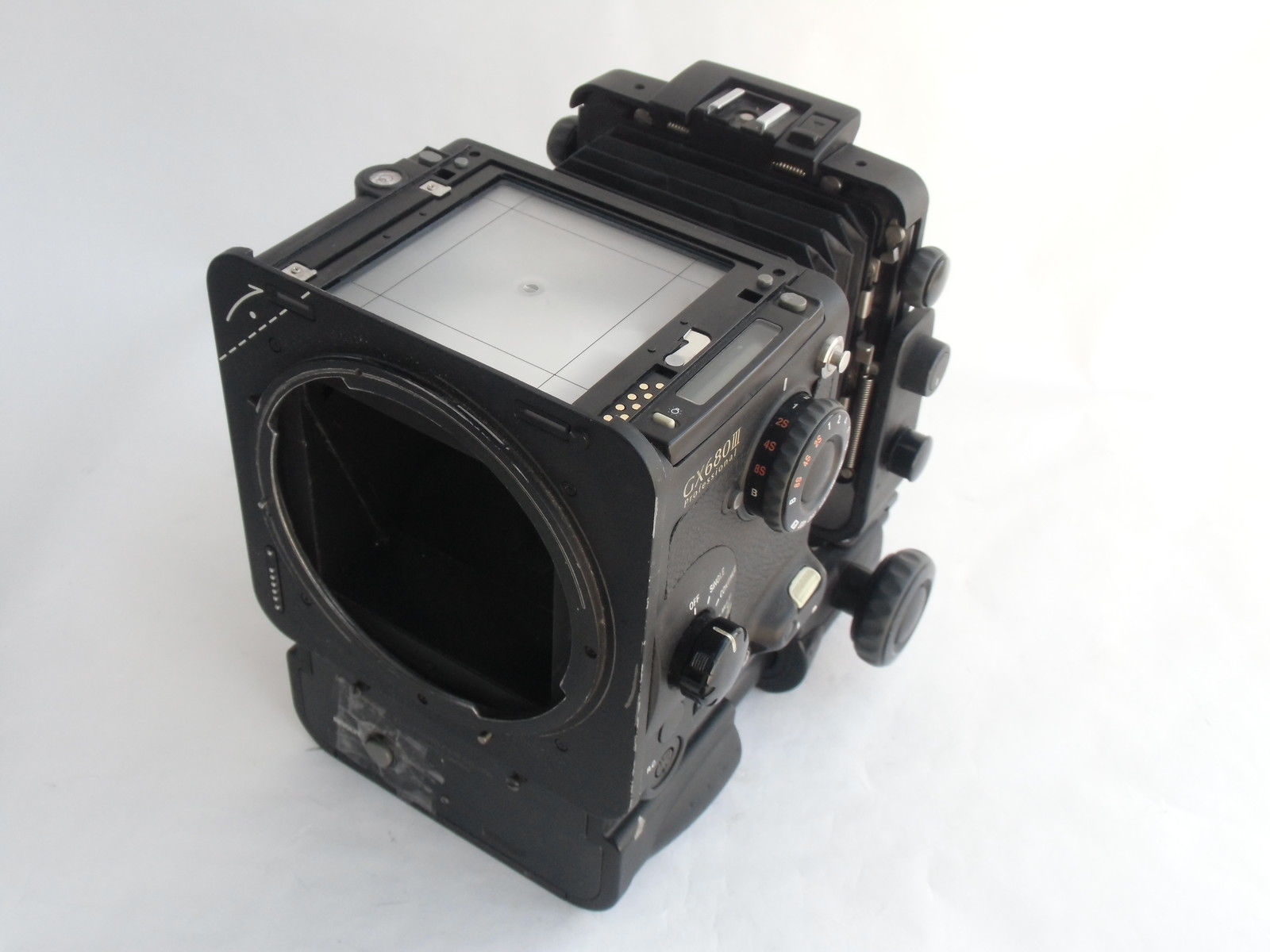 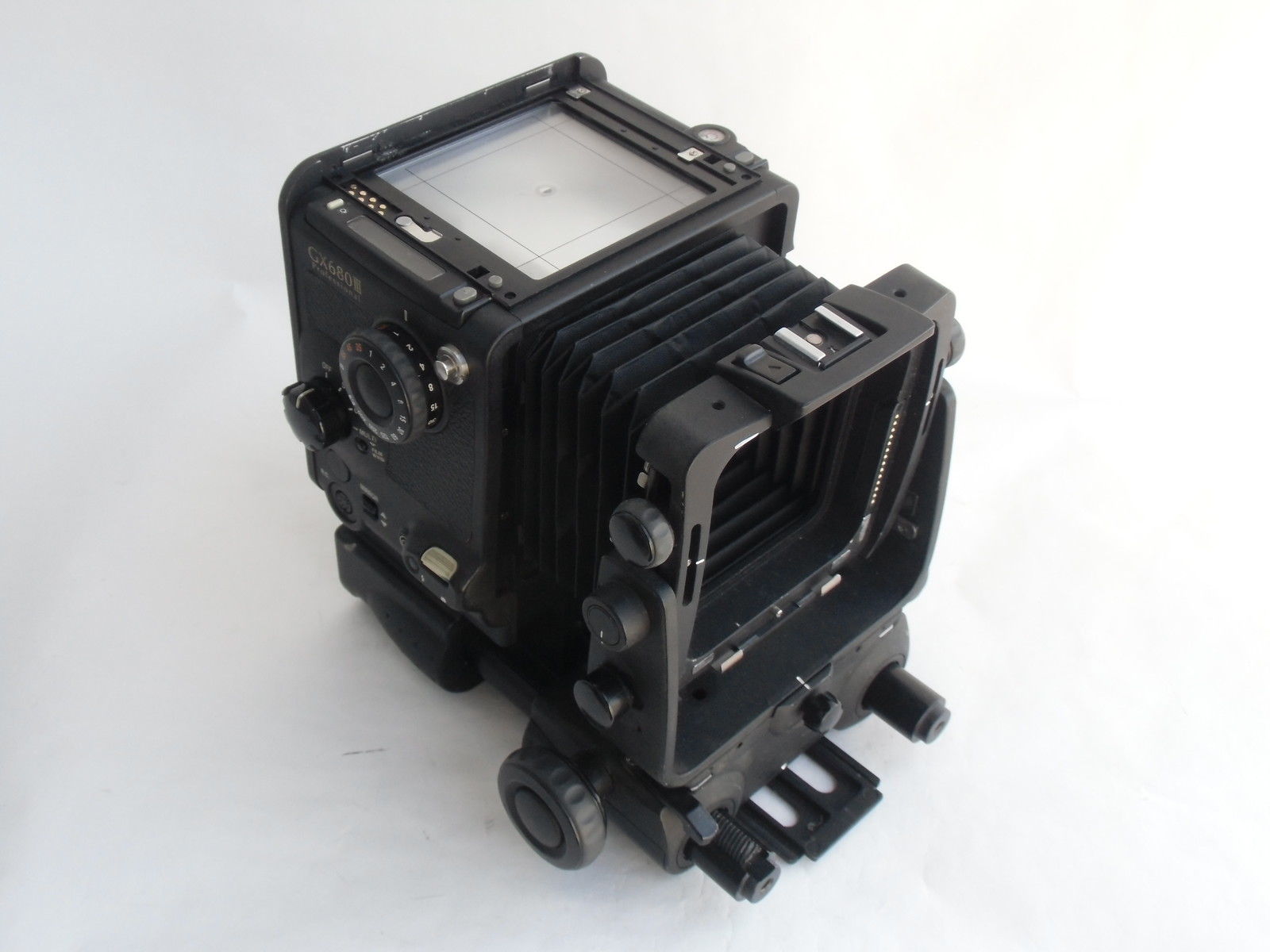 The Fuji GX680 III body I bought for about $200 with just the front and rear elements and the bellows. 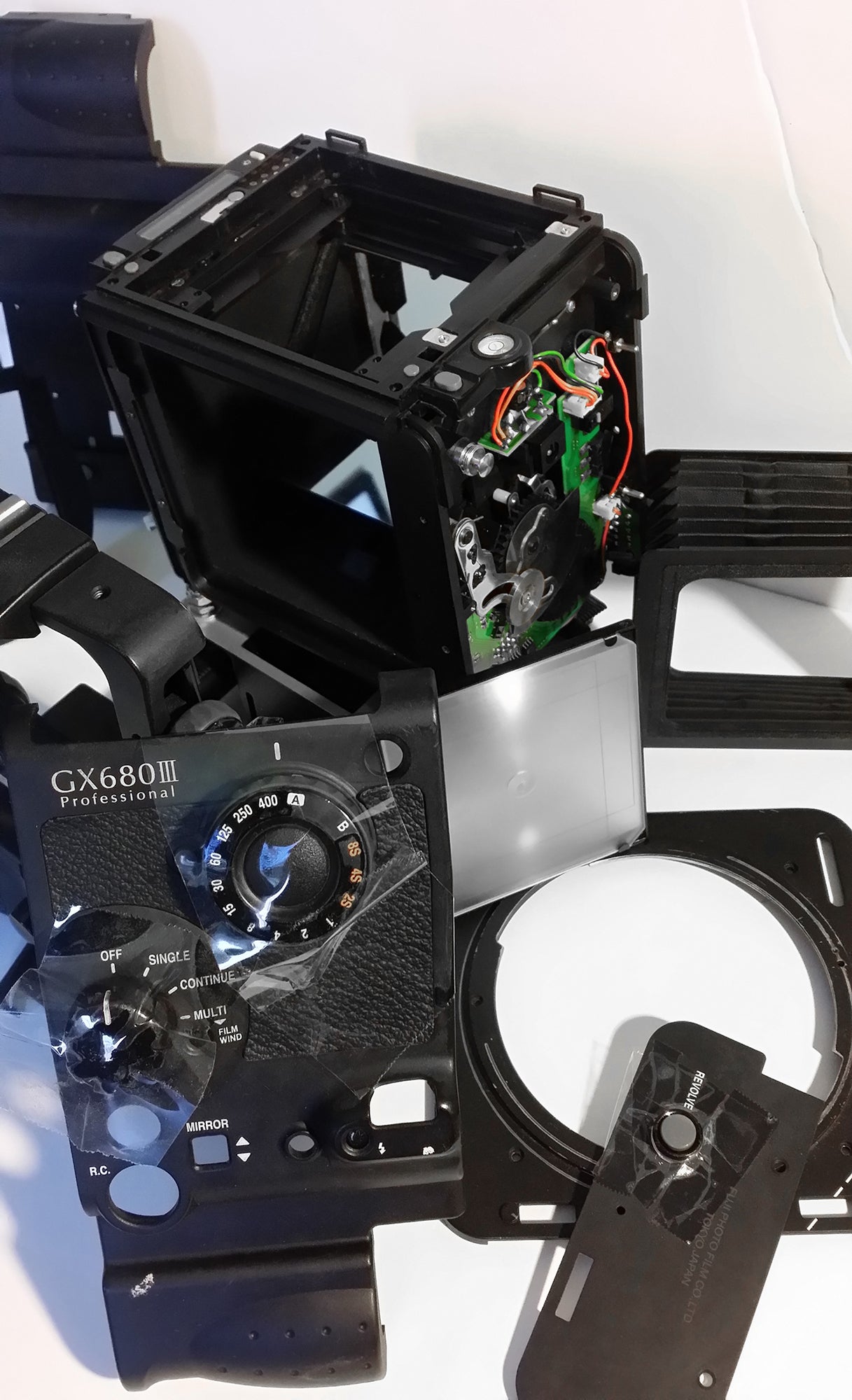 All the parts I didn’t need. 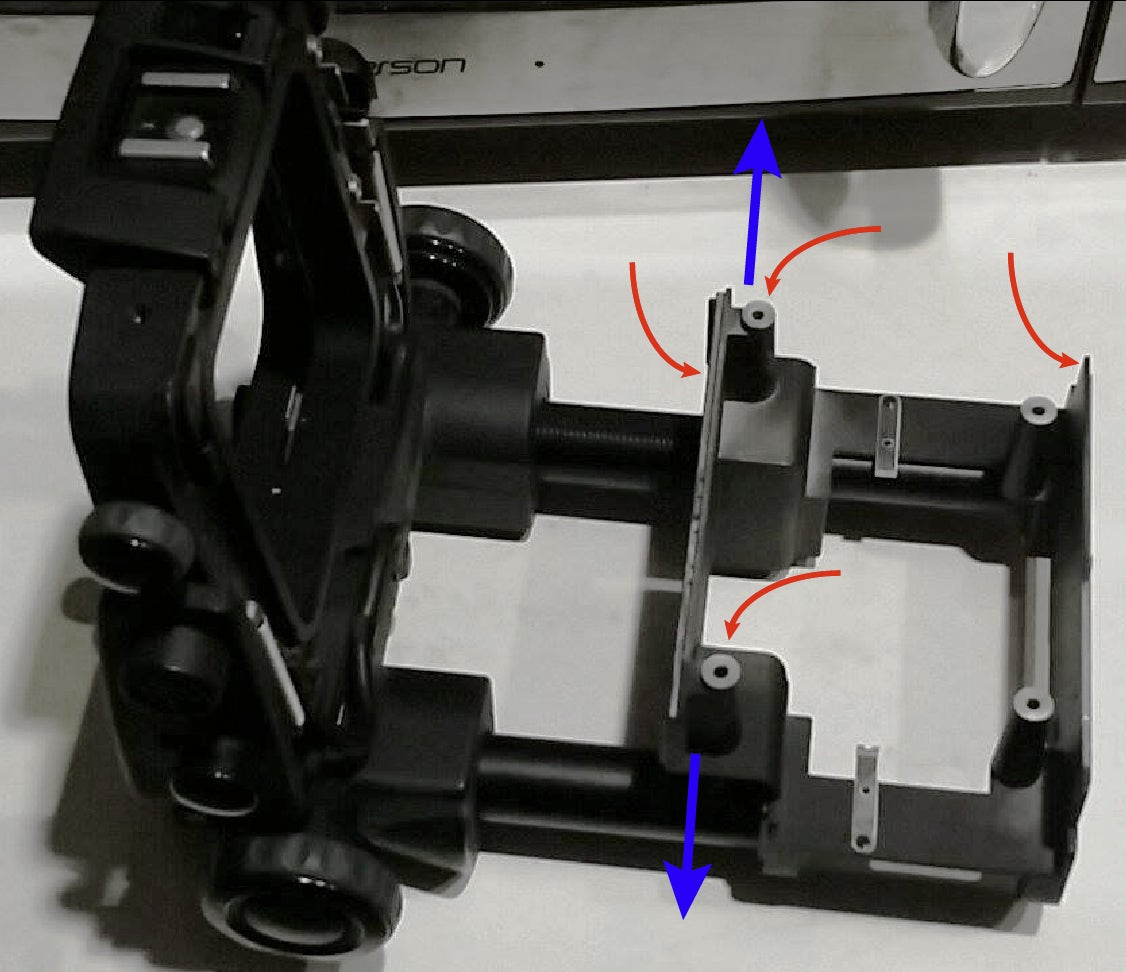 The few parts I modified (red arrows) to add the shift movement (blue arrows). I used a milling machine to remove the parts that the red arrows are pointing at to create a platform on which I could affix a two-way rail. This rail will eventually be used as a support for the camera board and it will allow for left/right shifting of the camera.

After doing a little machining (again, be careful if you do it!!!) and getting a few spare parts, I got a workable lateral shift element for what will be the back element of the camera, which will actually hold the mirrorless body. This part is a very simple and inexpensive (~$10) macro rail that was sourced on eBay. 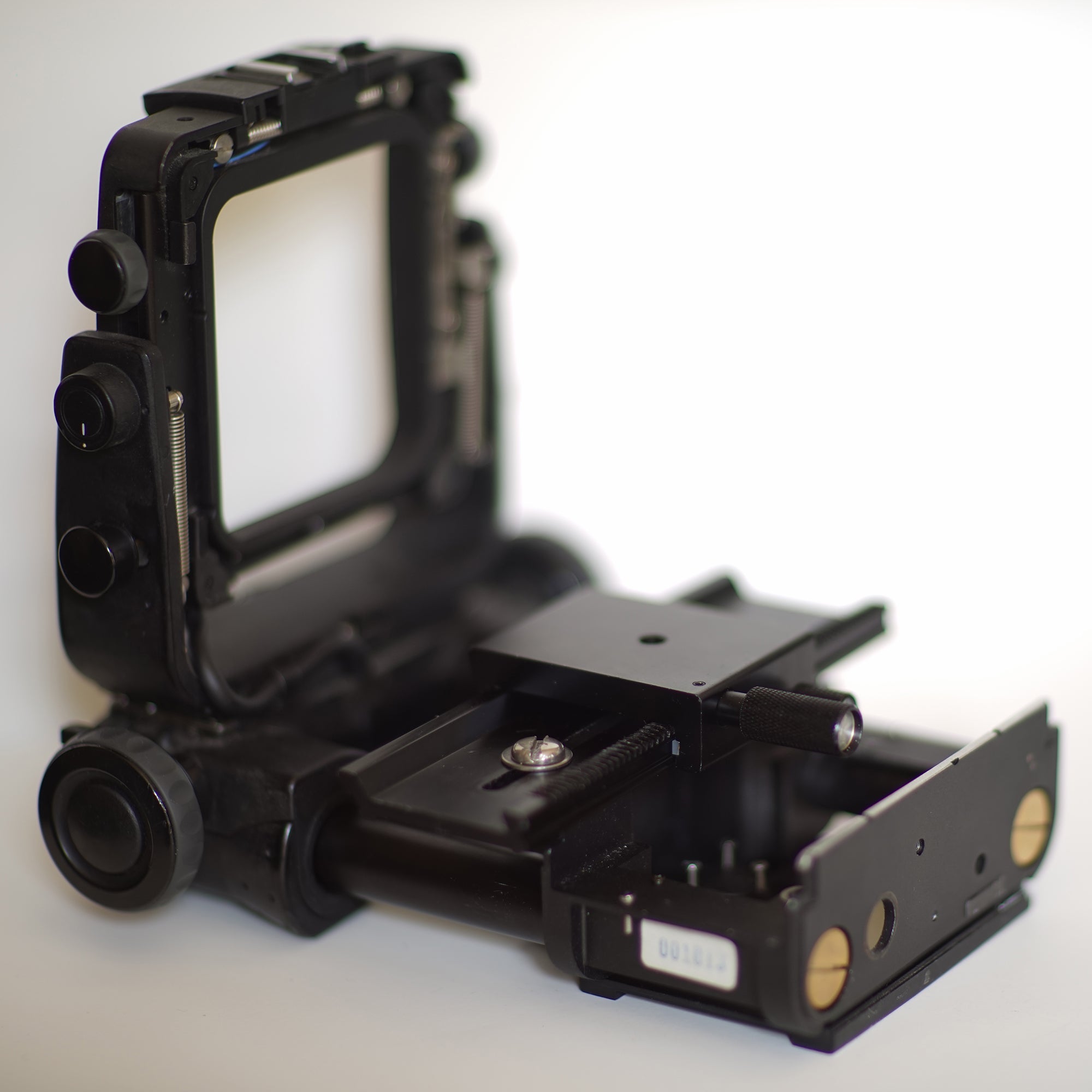 The body modified for the shift movement. I sourced a cheap precision rail on eBay for about $8 and used the milling machine to modify it. The rail is actually inverted to become a support.

Next step: Adding a rotating stage so I can use swing on the rear element, and incorporating a plate to with an E-mount ring to attach the camera. The rotating stage is the most expensive (~$70) part of this camera (except for the FujiGX body) and was bought from an optical company. It is essentially a precision rotating stage originally made to support and adjust optical elements in R&D labs. 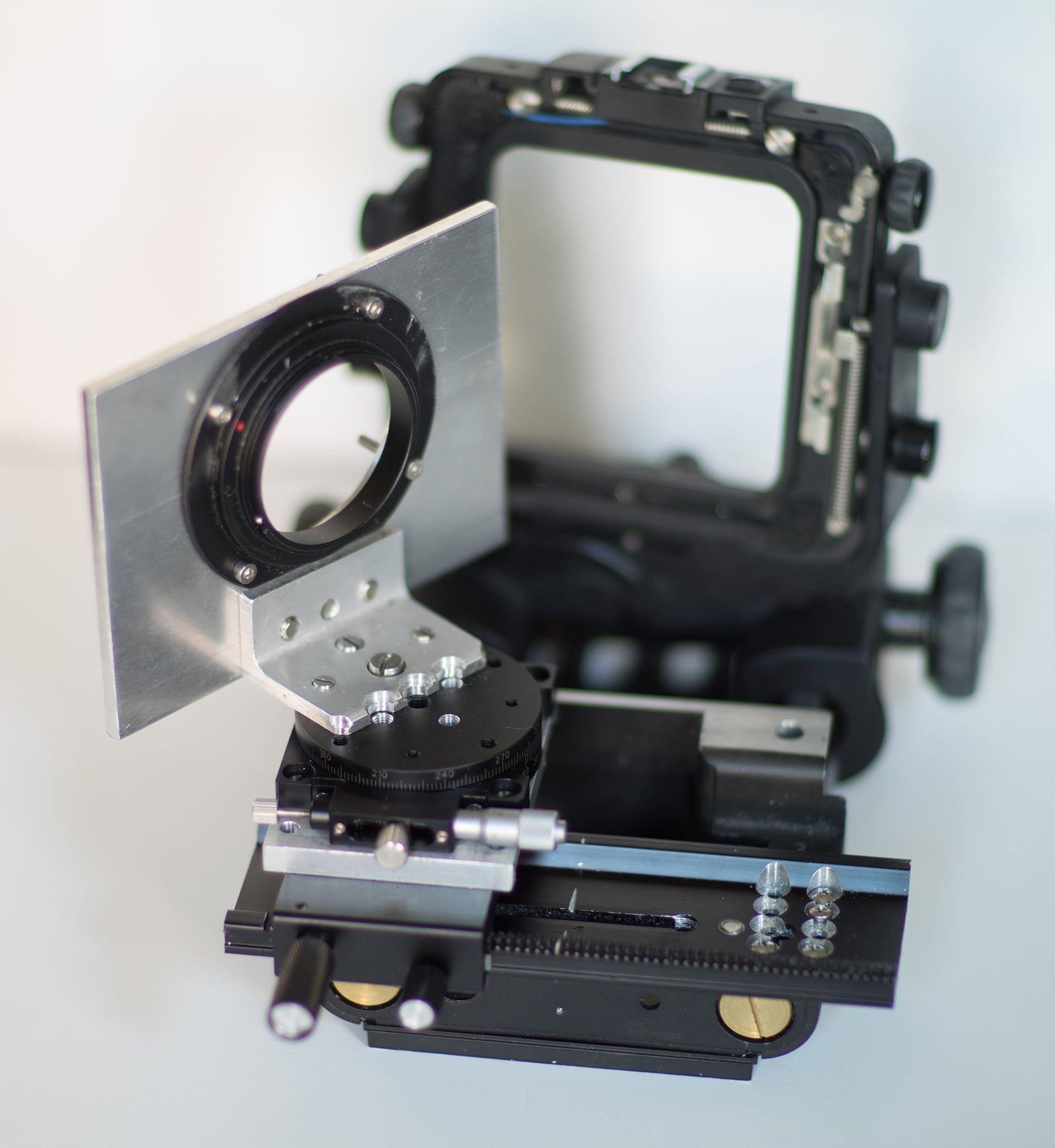 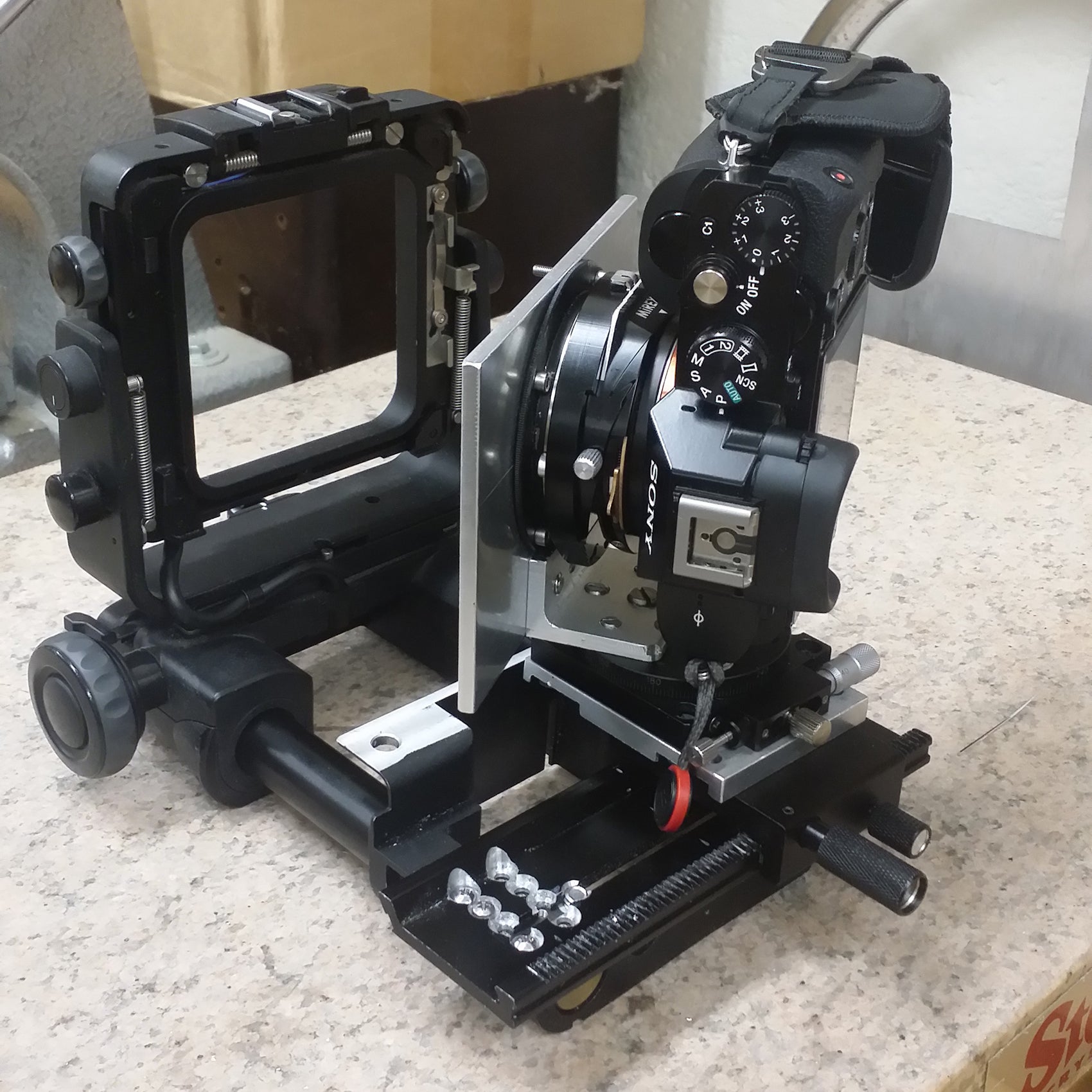 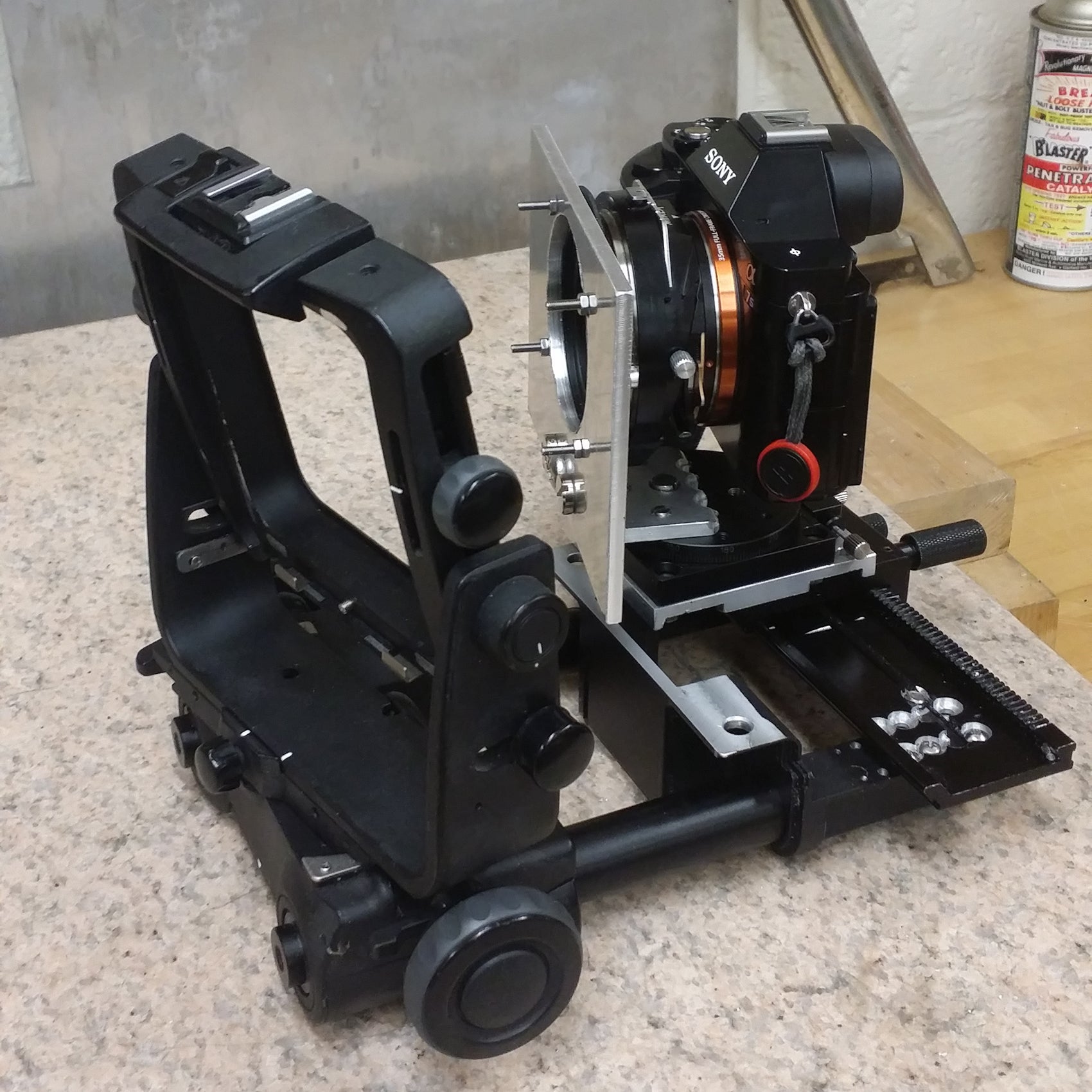 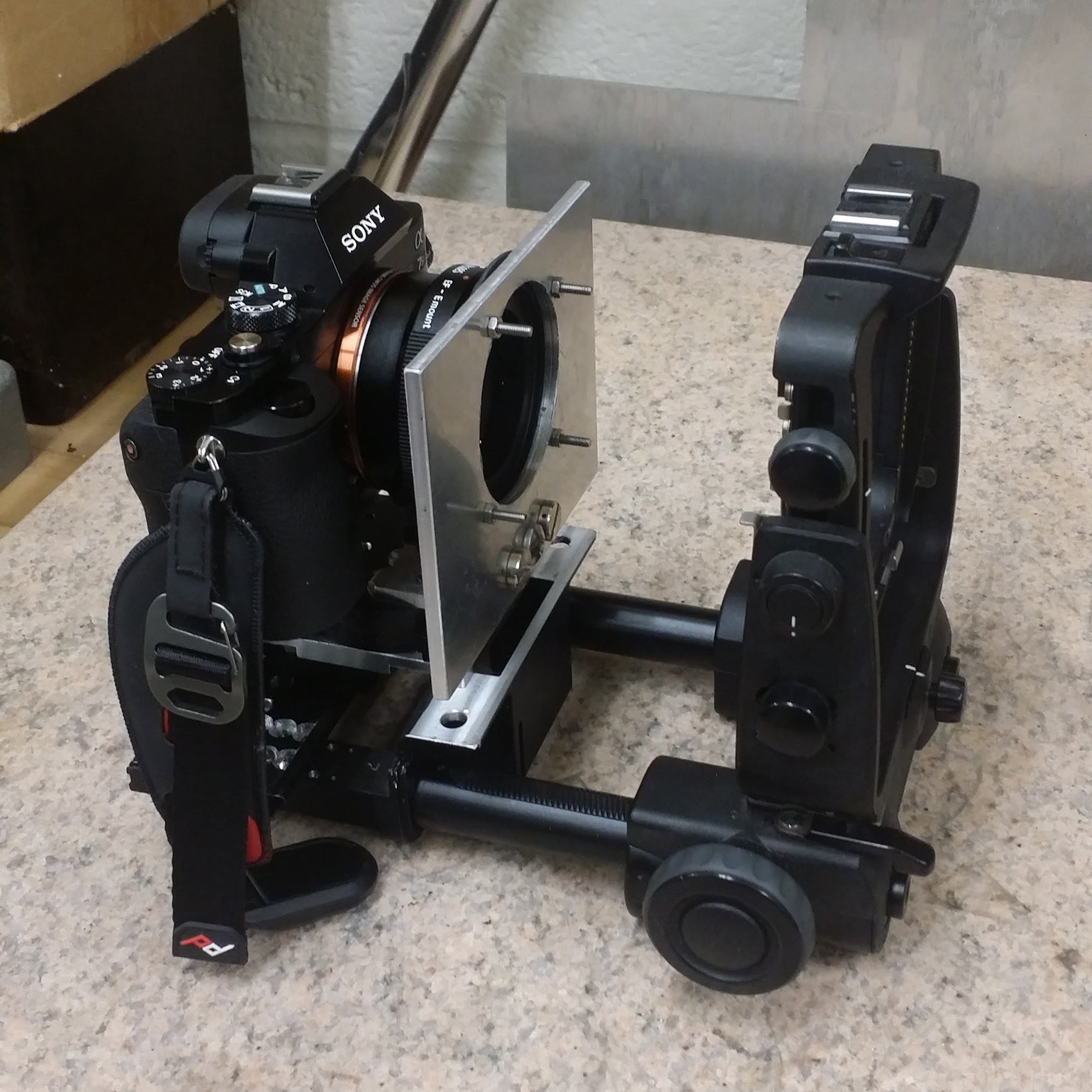 You can see the extreme tilt, shift and swing movements I can create with the hacked camera. 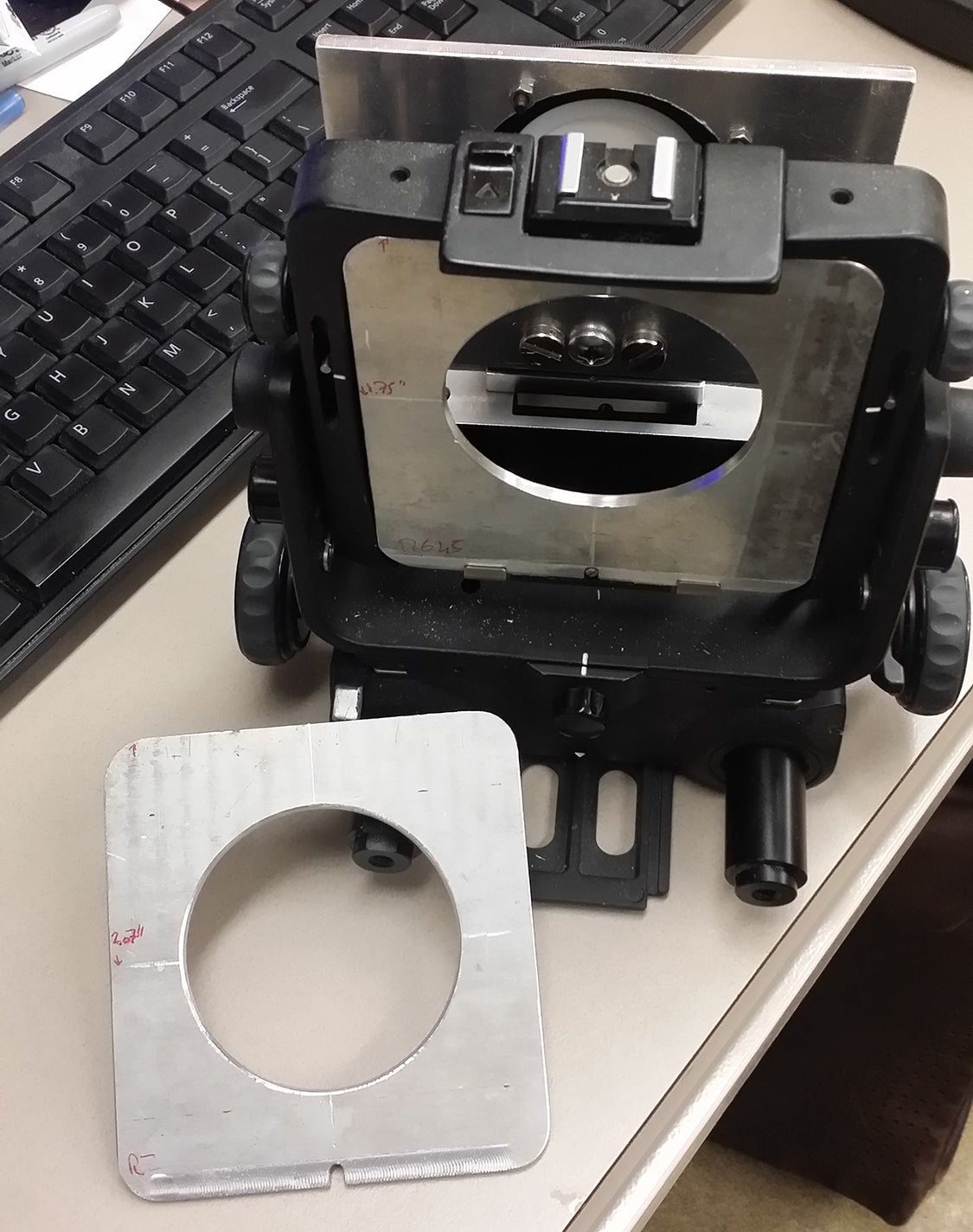 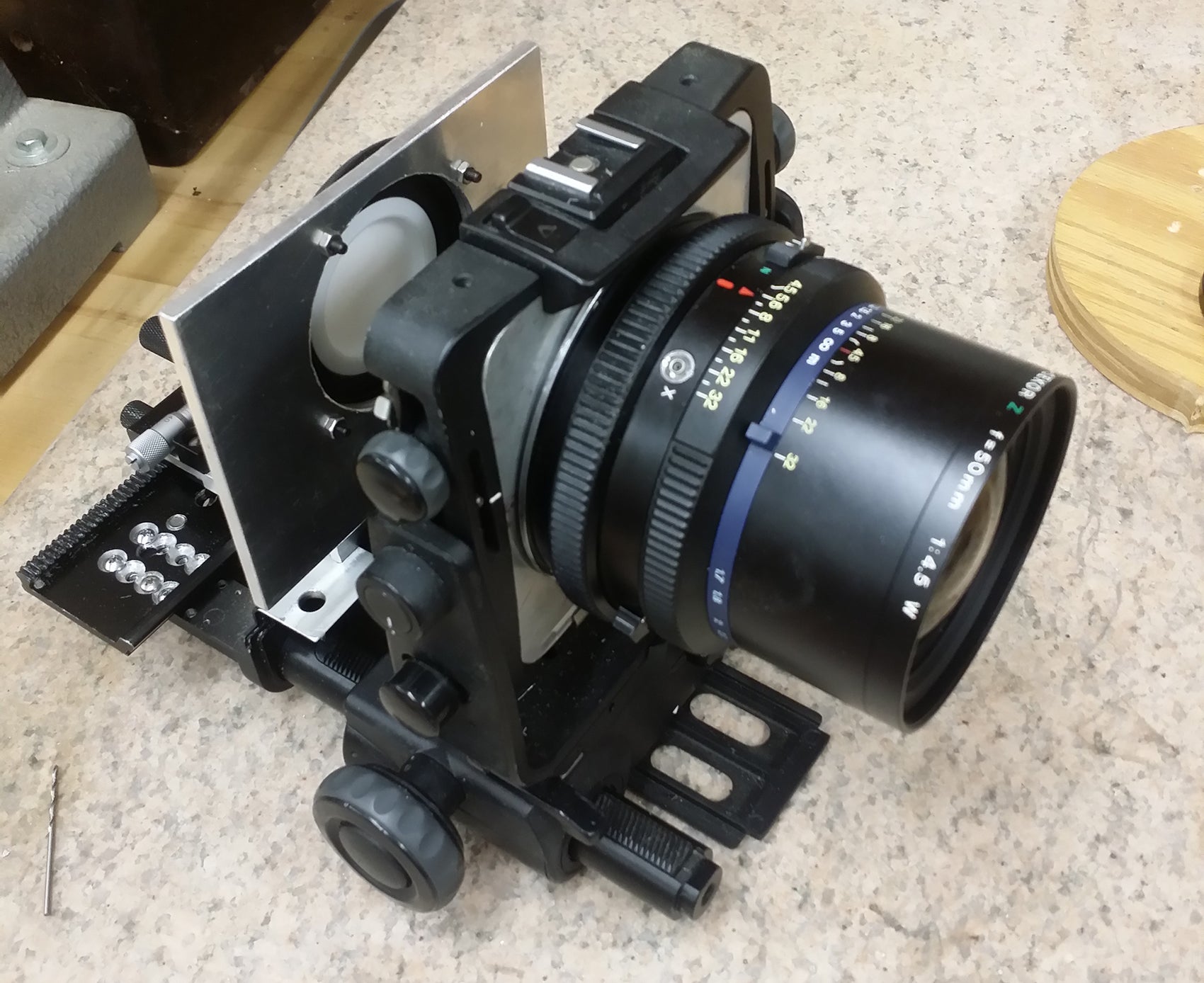 My Mamiya RZ lens board mounted on the hacked camera’s front standard.

Time to go play in the field! 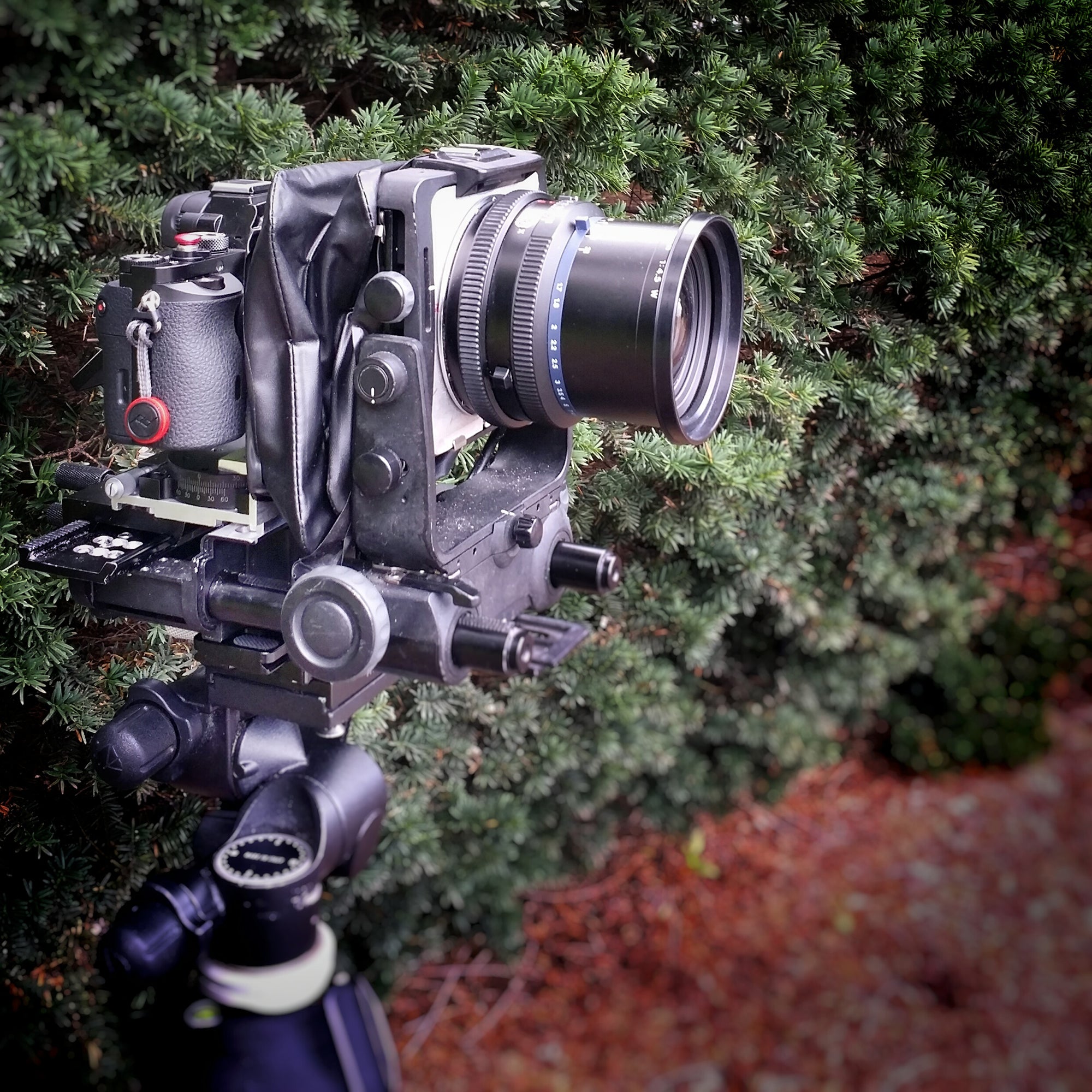 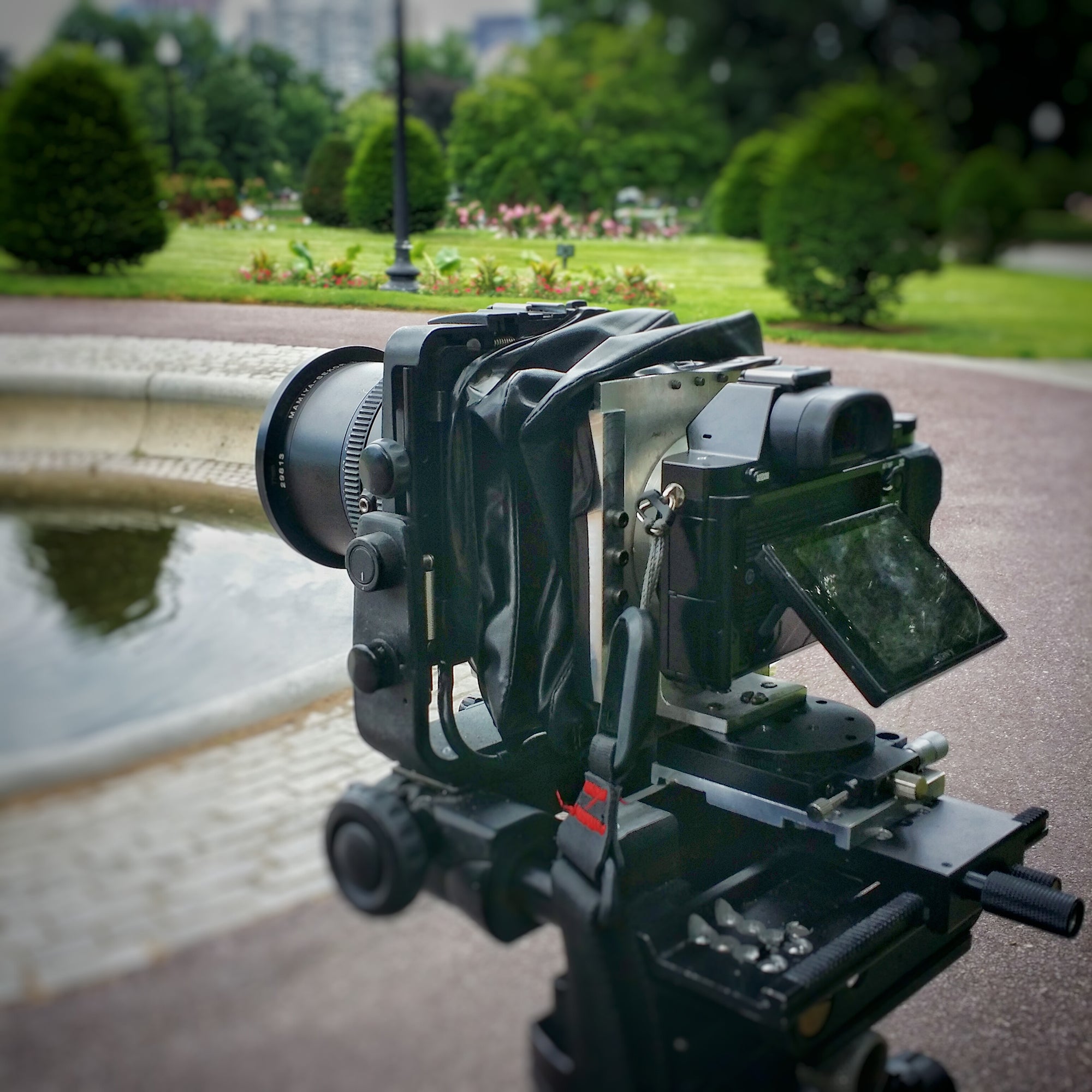 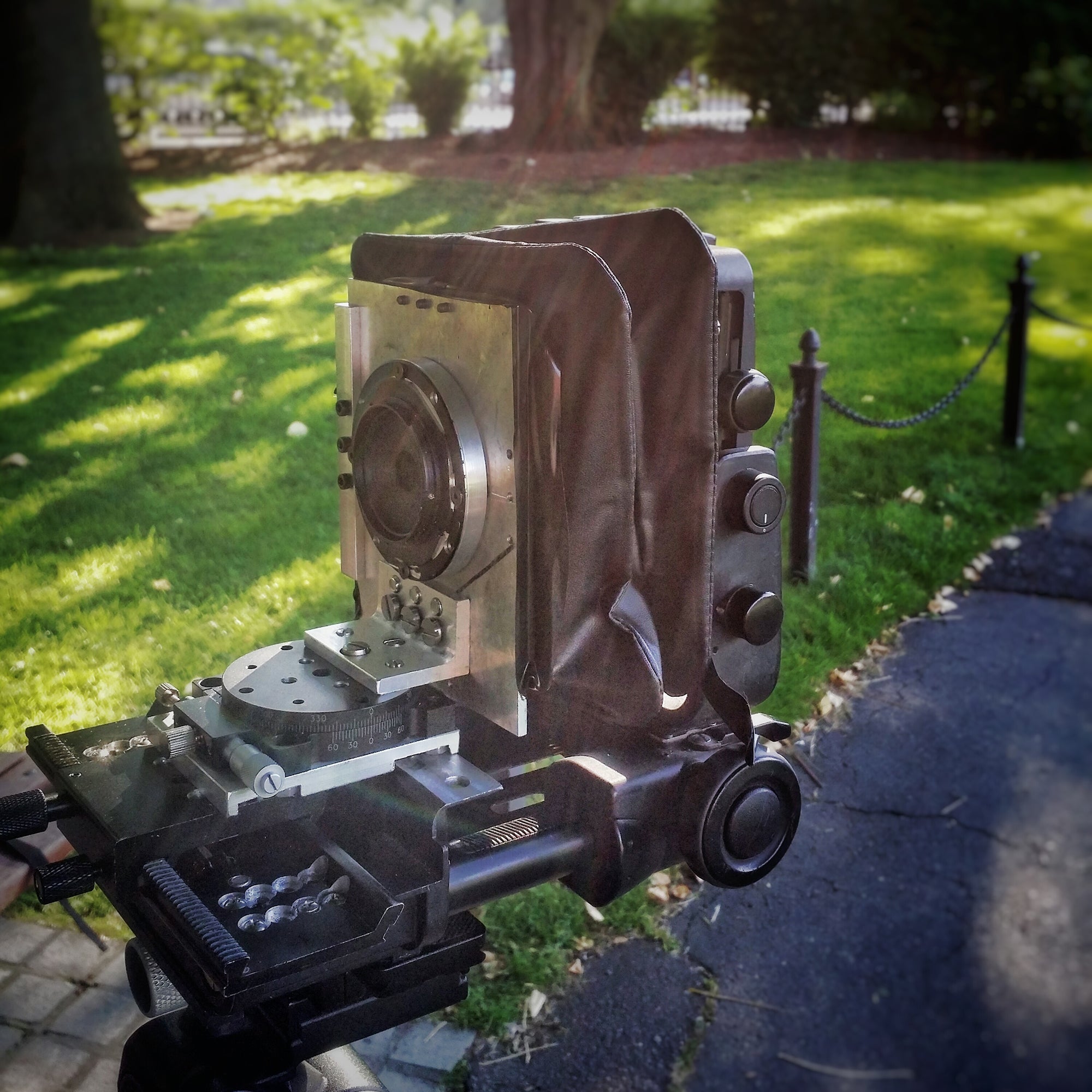 My hacked view camera in the field. Sony α7R attached to the back and Mamiya RZ lenses on the lens board. 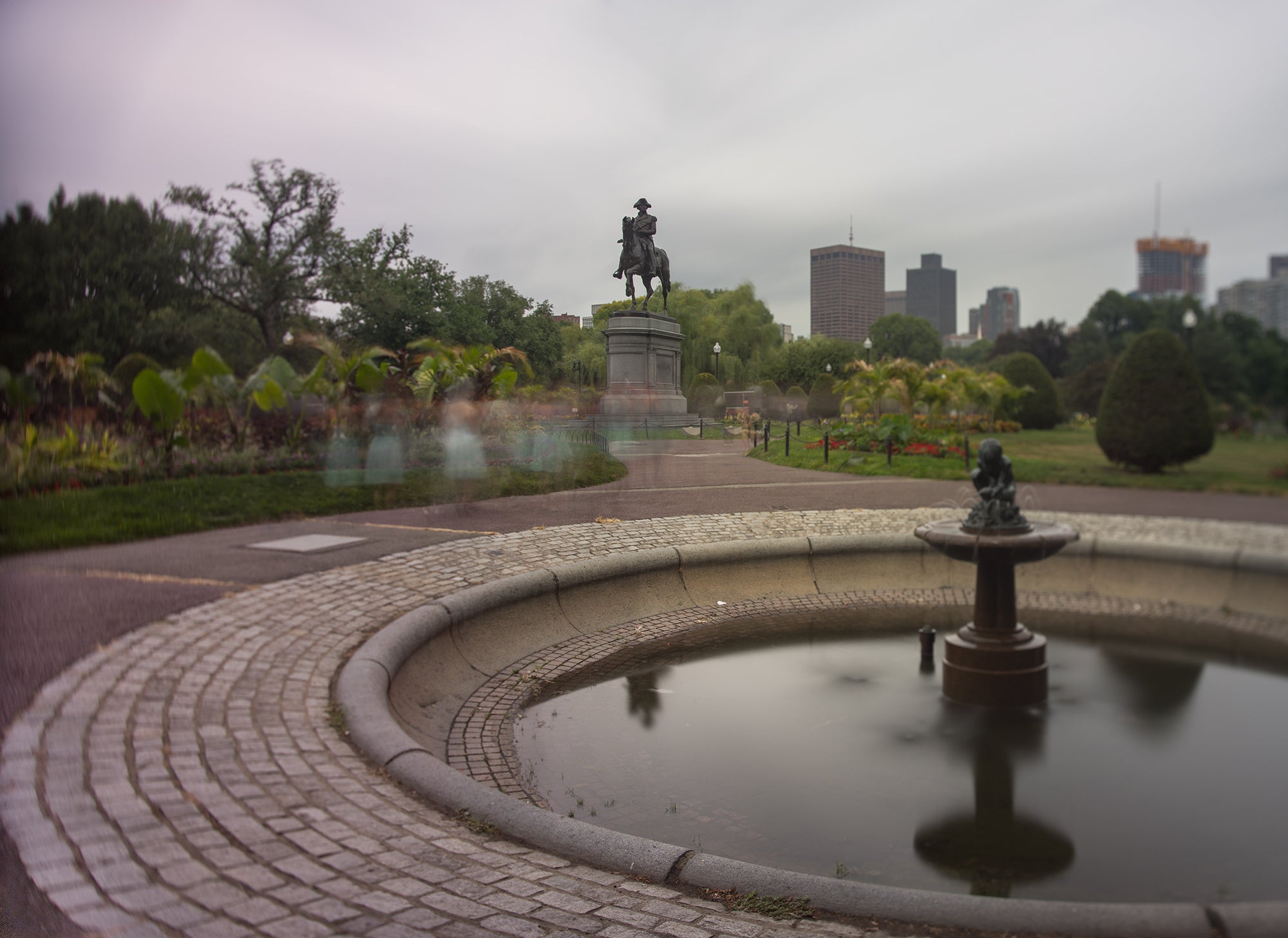 Sony α7R, Mamiya RZ67 50mm f/4.5 lens. 9 images stitched together. 3-minutes per exposure, f/8, ISO 320. A proof of concept image shot with the technical camera and a Sony a7R body, with close to 15 degrees tilt and a total of almost 50mm shift horizontally and 20mm shift vertically. I can shoot 9 images to be stitched together and never even reach the edge of the image circle. The final stitched image is about 14,000x10,000 pixels, with no distortion.

How to Tilt with a Tilt/Shift Lens 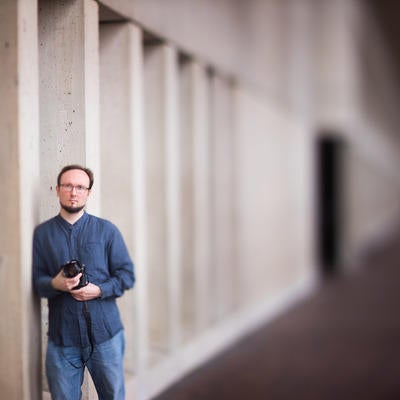 Born in France, Thibault Roland is a black and white fine art photographer specializing in long exposure architecture, minimalism and seascapes. He grew up with a love of science, eventually obtaining his PhD in Physics in 2009. His scientific research brought him to work in the United States as a researcher and engineer.
Previously an instructor at the New England School of Photography, Thibault leads workshops and gives presentations in the United States and in Europe. He is supported by Sony through their Artisans of Imagery and Global Imaging Ambassadors programs. His fine art photographs have been shown, published and awarded internationally and are included in public and private collections such as the Boston Athenaeum.
Thibault currently lives in Portland, OR.

How to Tilt with a Tilt/Shift Lens