I’ve done plenty of air to air photo shoots for editorial and commercial clients. Each one has its own complexities and shooting difficulties. None were quite like the photo shoot I was called to do in December of 2017. The photos I made for a shoot above Los Angeles represent some of the most challenging conditions I have ever encountered in my many years of professional air-to-air photography. 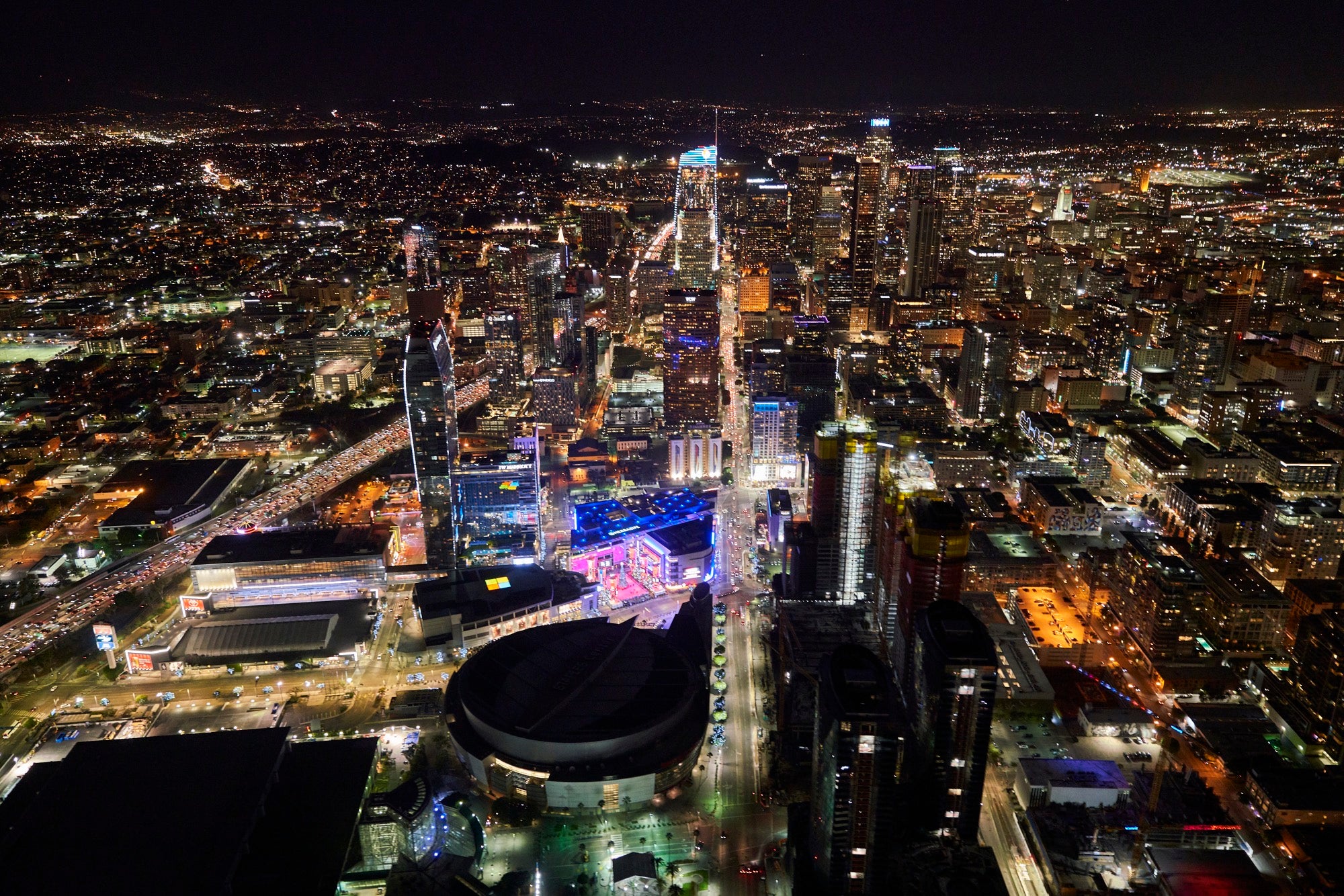 Air-to-air photo flights are typically executed during daylight hours, so while there are plenty of technical hurdles, the camera’s image sensor usually isn’t especially taxed during these sessions. Indeed, my main concerns for photo flights are usually confined to mitigating camera shake as much as possible, being creative as I shoot and staying safe. In December, however, I was called to do a nighttime aerial shoot which posed several unique challenges.

In reality, I had never done a night, air-to-air shoot, but I was up for it. After doing some tests with my α7R III, I committed to using that camera for the shoot. While I was confident that the camera would handle the shoot well, because this was a first, nothing was certain.

Here’s the background on the shoot. In August of 2017, Sony announced the Venice, a new cinema camera that sports a full-frame, 6K imaging sensor. The camera launched with a cool film called The Dig.

I was asked to join some friends for a series of camera tests with the Venice mounted to a Shotover K1, a six-axis gyro-stabilized gimbal bolted to the nose of Pursuit Aviation’s new Airbus AStar B3e helicopter.

Our plan was to fly a series of flights each with a different full-frame lens on the camera. On one of the nights, we were flying the Venice with an Angenieux 44-440 Anamorphic zoom lens, on others we flew with both Leica and Cooke full frame glass. And I was capturing all of this with my α7R III.

Pursuit Aviation (@Pursuit.Aviation) and Bertone Visuals (@BertoneVisuals) joined forces to produce this aerial cinematography camera test. On these flights they not only captured the first aerial anamorphic footage with the Sony Venice, but more importantly they were the first to shoot in 6K Full Frame mode, which required dedicated brand new cinema lenses like the Cooke S7/i and the Leica Thalia. 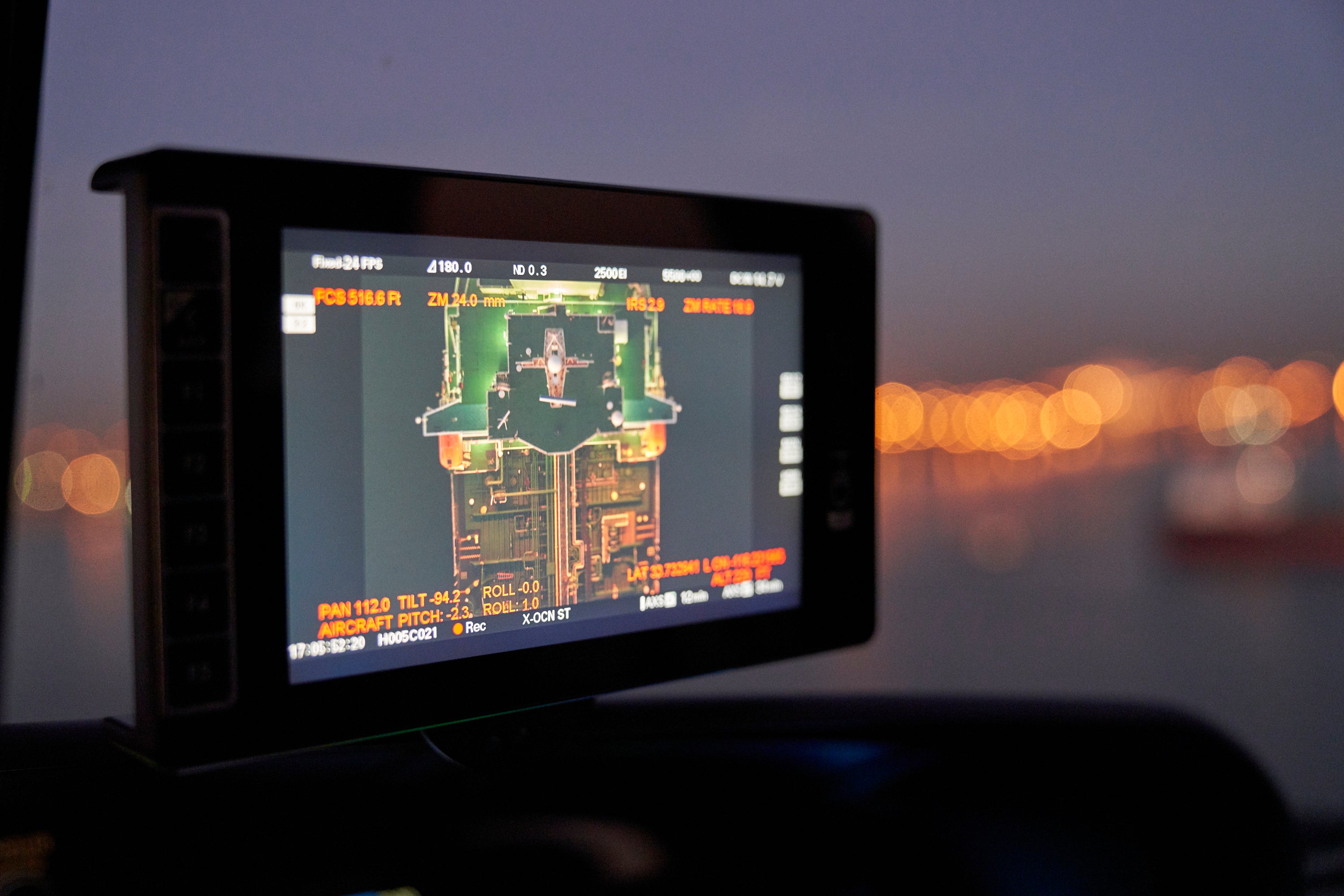 Where The Rubber Meets The Runway

As Pursuit Aviation’s John Tamburro streaked through the night skies over Downtown Los Angeles in Pursuit’s AStar, I was sitting, and shooting, left seat in the subject helicopter, a super-cool Aerospatiale Gazelle—fast and maneuverable like its namesake. My pilot was Bob Muse of Robinson Helicopter fame, and as we flew lead through the concrete caverns of downtown Los Angeles, I picked off shots of the AStar as it flew off our wing, the Venice in the Shotover K1 rolling on us. 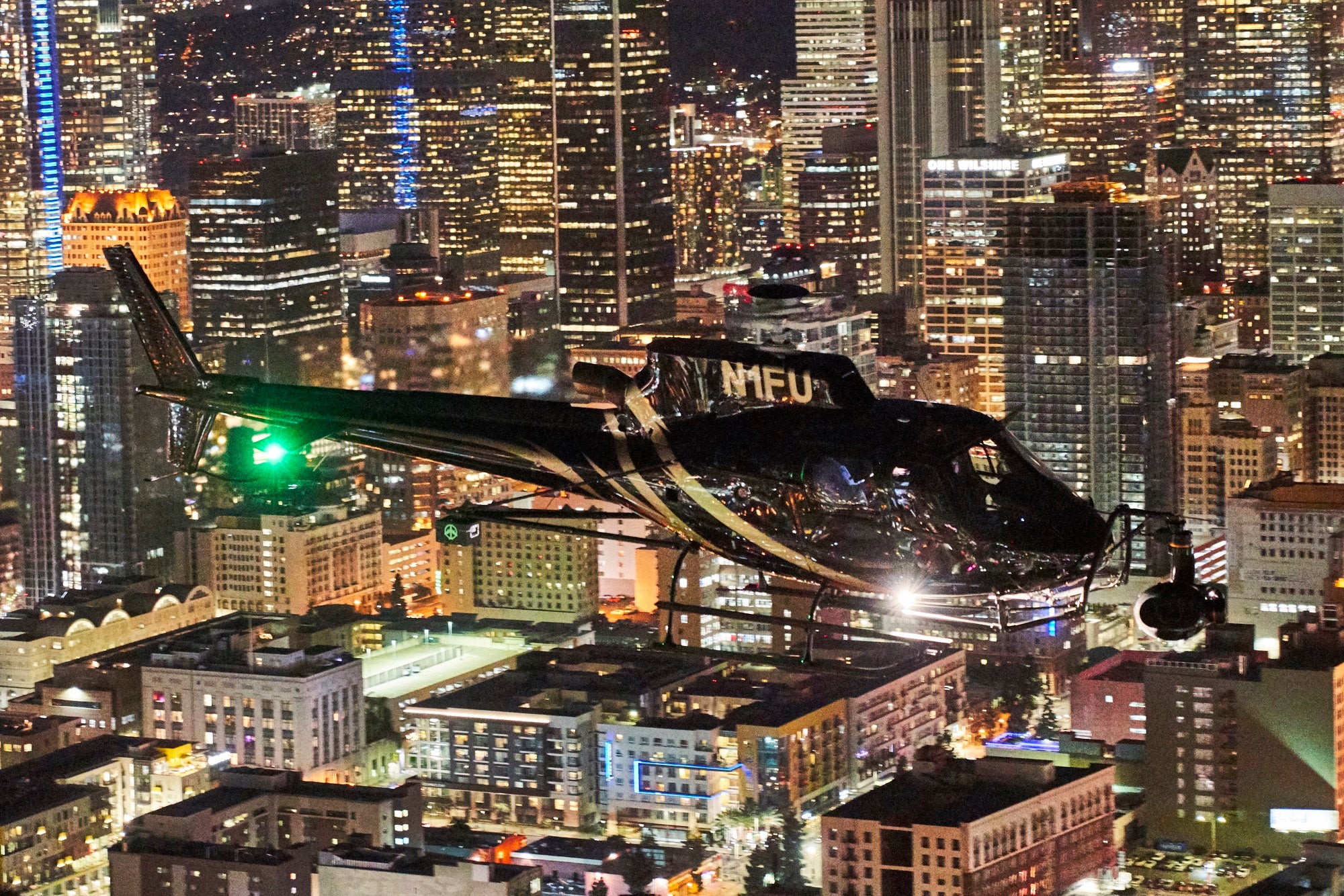 Sony specs show the new Fast Hybrid AF system in the α7R III to be reliable down to EV-3 brightness. I used every bit of that capability to track the black helicopter against the black sky, and even to track and maintain focus as the AStar dove beneath us with our flight paths converging with much more relative speed between our two ships, I’m honestly blown away. I’m convinced that I would never have been able to do this with my α7R II or α7S II. 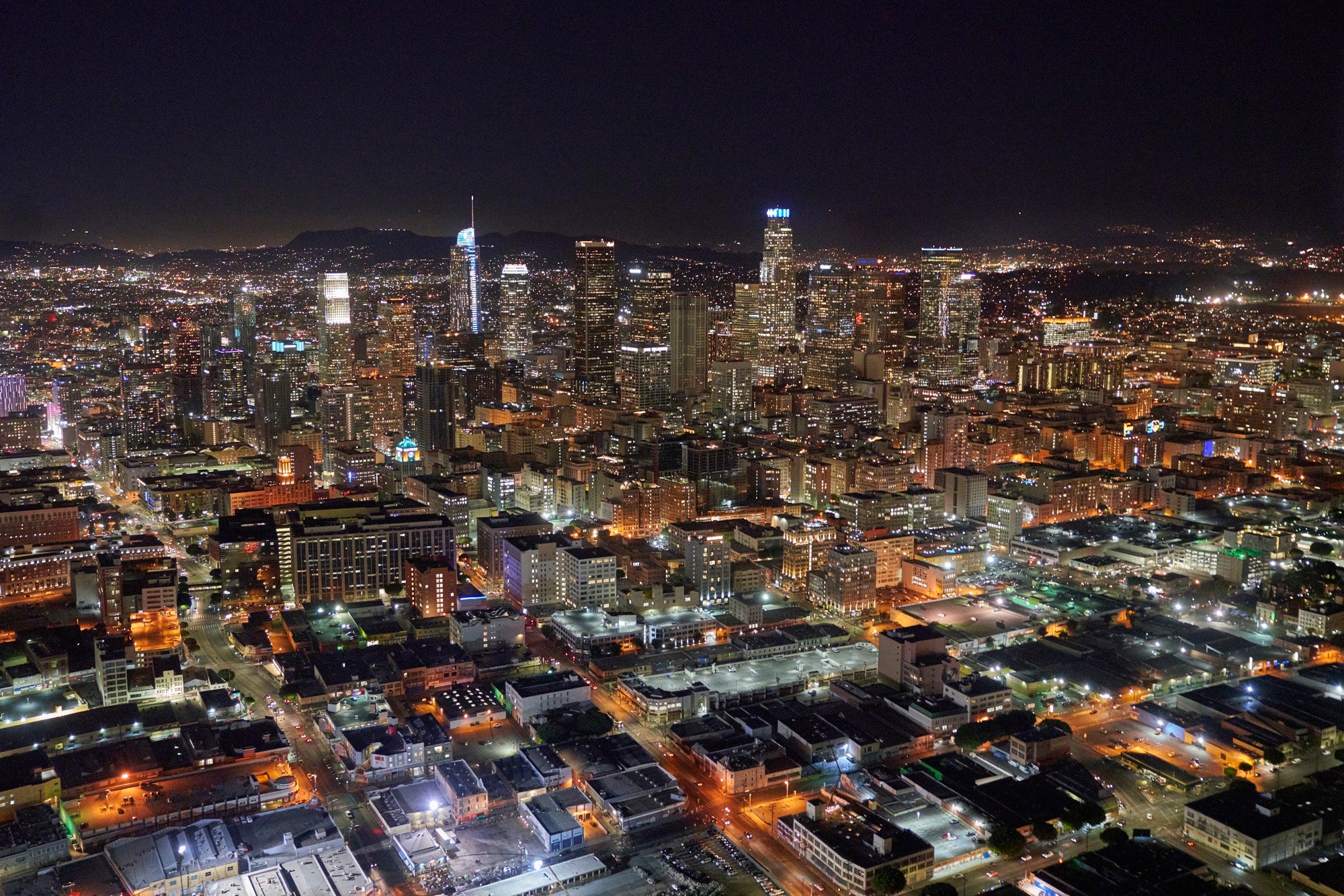 Of course, as we were whomp, whomp, whomping our way over Los Angeles, my camera’s internal IBIS image stabilization system was also critical to the success of the shoot. Even though these helicopters are powered by smooth, turbine engines, there is always some vibration and turbulence. Couple that with the slower shutter speeds that I favor for these types of shoots that I detailed above, and there’s no doubt that IBIS and my fast G Master lenses were critical to my success.

And then there’s the fact that we were shooting at night. Think low light and you probably think of the α7S and α7S II cameras with their much-discussed and highly-regarded low-light performance. For this flight, since I was set to either Shutter Priority or Aperture Priority, I let the α7R III control the ISO. It turns out that not only were a handful of the final shots captured with the ISO at 12,800, but one of my favorites from the evening was only possible with a combination of all of these features: clean, high ISO, fast, accurate AF in low light, and IBIS, working perfectly in concert to help me realize my creative vision.

I’ve included this image below, perfectly sharp while shot at 1/20-sec., with the blur of city lights below enhancing the effect of our speed through the air. This photo would not have been possible with any other similarly configured camera. 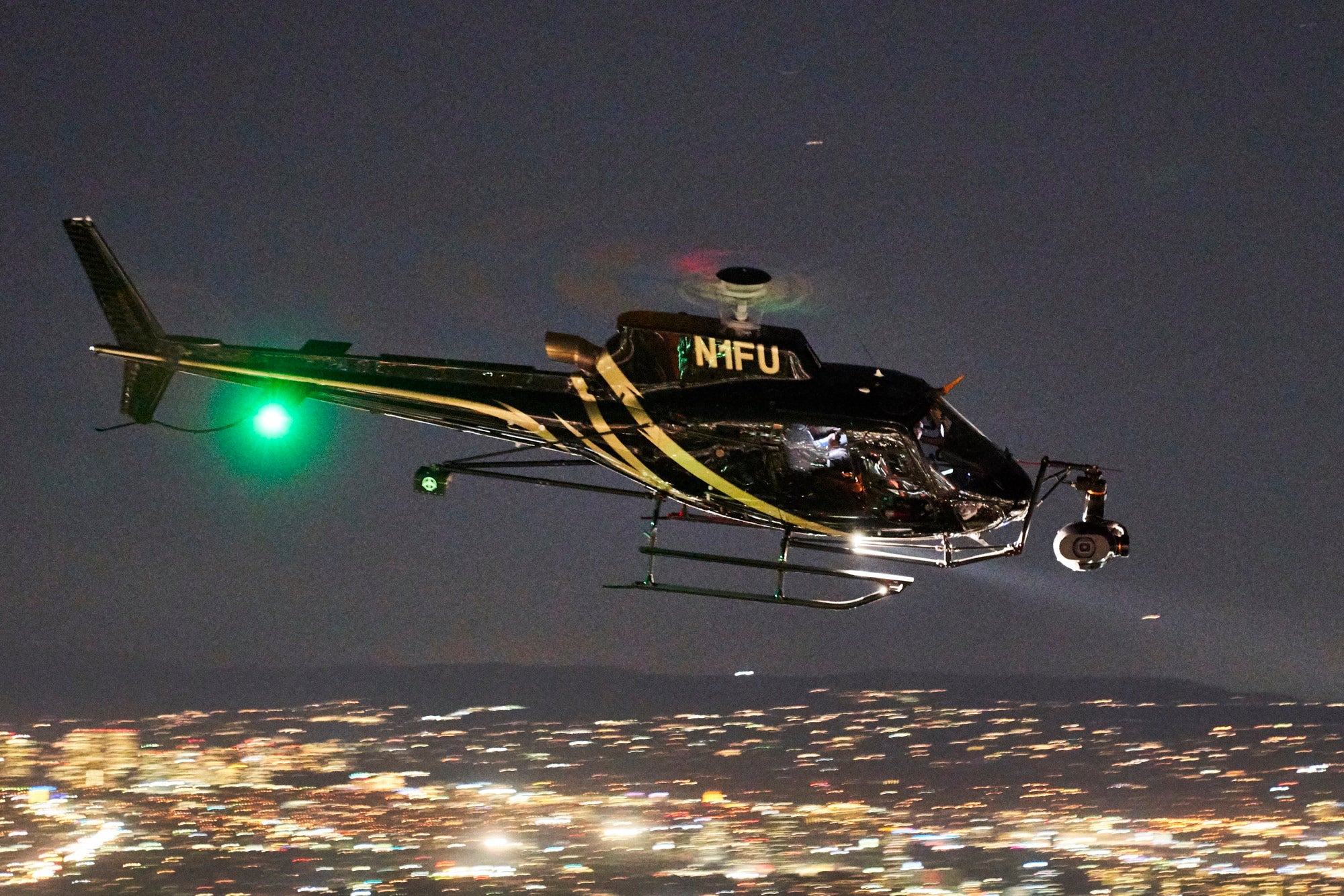 Full frame prime lenses were courteously provided by the lens manufacturers, Cooke Optics and CW Sonderoptic / Leica, whereas the Super35 4K Angenieux anamorphic 44-440mm zoom was loaned by BeCine rental house. This production and these flights would not have been possible as my friend, cinematographer and producer Gianluca Bertone, pointed out without the system integration efforts of Andrea Bassani, D.I.T. Alex Carr, and the support of Peter Crithary and Simon Marsh of Sony Professional Solutions Americas.

Jeff Berlin is a Sony Artisan Of Imagery. See more about him here. Follow him on Instagram @jeffberlin.

How Air-To-Air Photos Can Look So Good

How Air-To-Air Photos Can Look So Good