Throughout the week we've been featuring content on portrait photography, and so far we've learned about the Sony lenses pro Miguel Quiles packs in his bag for a portrait shoot, composition tips for shooting portraits from Wesley Overklift and how to create a cinematic portrait from RoGina Montgomery. Keep reading to learn more about this portrait shot by Abel Perez of the Alpha Collective.

Photographer Abel Perez (@abel.psd) of the Alpha Collective shares how he took this cinematic portrait inside a vehicle to replicate motion.

Photographer Abel Perez (@abel.psd) of the Alpha Collective specializes in fine art and cinematic portraiture. With one look at his high-concept images, you can’t help but wonder how he came up with the idea and how he executed it. We love this cinematic shot he captured inside a vehicle and connected with Perez to learn more about his inspiration behind it and how he created it. See his words on the story behind the shot below. 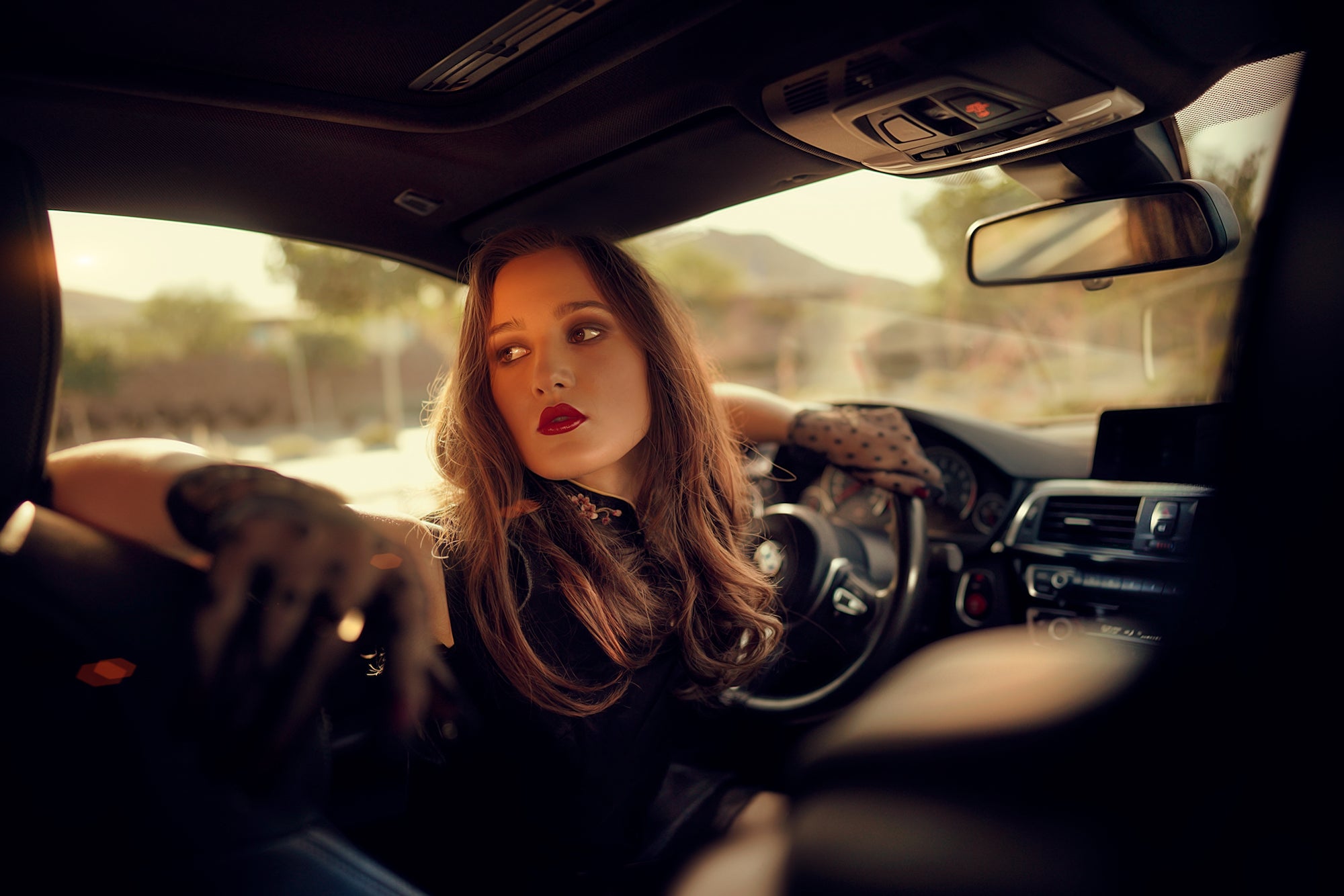 Cinema possesses the ability to build ambiguity, heighten emotion, and portray an almost unattainable sophistication in the eyes of the viewer. For this shoot, I wanted to challenge myself to encapsulate the motion and emotion felt through running film and replicate it in a single frame - without the commitment and extravagance of a Hollywood movie set. Armed with the bare necessities - one light, one lens, one model, and within the confines of a car, I sought to command attention with simplicity. A touch of light reflecting off the smooth monochrome interior, a subtle glance, and a contrast between deep blacks and buttery light - all working in conjunction to create an inkling of an intimate story that draws the eye for just a second longer.

For this shot, I instantly knew the α7R III would be the perfect fit due to its high resolution and Eye AF tracking feature. The high resolution was an absolute must in order to capture the fine details of the subject’s eyes, along with all the intricacies of the vehicle, such as the stitching on the seats and texture on the headliner. Being pressed for time, I didn't want to deal with taking an excess of shots just to get the right focus; the Eye AF was the perfect solution, allowing me to get in and get out quickly with virtually flawless focus within the first few photos. This feature was ideal for prioritizing the subject’s eyes instead of the competing details of the interior as the model moved through her poses. Since this shot was planned to be taken midday in a black vehicle, I knew I would need all the dynamic range I could get. With just a neutral density filter to assist, the Sony α7R III delivered as expected.

During the planning of this shoot I quickly came to the conclusion that the Sony 24mm f/1.4 G Master would be the ideal lens for this occasion. The goal was to capture a wide-angle, cinematic ambience – one that could paint a story by capturing the subject’s emotion, without losing any context in the restrictive space of the vehicle. I didn't want to go too wide, such as with the 14mm or 16mm; the Sony 24mm f/1.4 provided the perfect balance between wide enough and incredible sharpness. Wanting the focus to be solely on the subject and the car's interior, I also wanted to bokeh out the background outside. The buttery bokeh that the 24mm provides is simply phenomenal and very effectively turned the exterior background into a soft subtle detail of the shot. Due to its low light capabilities, this lens also allowed me to fill in the dark shadows of the car’s interior for a well-balanced exposure. Shooting wide open at f/1.4 combined with the α7R III’s Eye AF really contributed to the success of this shot and I must admit that I’m very impressed with the performance of Sony’s technology. (Learn more about all of the gear Abel uses in his What’s In My Bag article.)

For lighting, I used a Profoto A1 combined with a 24-inch custom made snoot. Utilizing the sun as a backlight, I also wanted to add a bit of warmth to the subject's face, from what would appear to be a reflection within the environment. I used a warm CTO gel to mimic the sun and a tight snoot to aim a sliver of light directly toward the side of the model's face. This combination created a golden glow inside the vehicle without overexposing any of the dramatic shadows or taking away from the rich blue tones of the interior.

Maneuvering inside a compact vehicle proved to be an interesting challenge for both myself and the model. Having my range of motion restricted significantly, it narrowed down my options for angles quite a bit. Nevertheless, we were able to capture an intimate feel, while still bringing details across the car into the frame. From the perspective of the backseat, the personal space of the subject was preserved, framed by the seats and enhanced with the snoot. The challenge proved not to be so difficult once the mastery of the camera, lens, and lighting came into play. I shot it at 1/250-sec., f/1.4 and ISO 100 with the White Balance set to Shade and the Resolution at 350 pixels per inch.

As a fan of Photoshop, I love the post-production process and what it can do for a photo, but these days I find myself experimenting with ways that can yield a shot straight out of camera that is reminiscent of my post-production editing style. As a result, there's not much editing that took place in this photo. I mainly focused on composing a tone that would add that extra touch of emotion. This was achieved through a series of adjustment layers. I applied a blue solid color adjustment layer to bring the shadows down from black to blue for a cinematic effect. Additionally, I used a custom lookup table that I created a while back, combined with several gradient map adjustment layers to conclude the warm overtone. I then moved forward with cleaning up a few specks of dirt on the windshield of the vehicle as well as some super minor skin retouching on the model. As a final touch, I applied a color dodge blend layer with a motion blur to create a hint of a light flare. I am proud to say the shot truly spoke for itself.

Behind The Shot: How A Unique Lens Made This Portrait In The Poppies

Abel Perez is a member of the Sony Alpha Imaging Collective. Follow all of their adventures on Instagram https://www.instagram.com/abel.psd/.

Behind The Shot: How A Unique Lens Made This Portrait In The Poppies